THE GIRLS ARE SHOOK
Source

Disney/Pixar’s #ToyStory4 is finally crossed $1 billion putting Disney in an atmosphere that no other major studio has ever touched https://t.co/HBv66cDHWr


Toy Story 4 crosses a billion dollars today.
Disney has become the first studio to have five billion dollar grossers in a year (Captain Marvel, Avengers: Endgame, Aladdin, The Lion King being the other 4). All of Disney's non FOX releases minus Dumbo have crossed a billion dollars. Frozen 2 and Star Wars: The Rose of Skywalker are will also cross a billion later this year.
2019 has broken a box office record with the most movies ever crossing a billion dollars at six (Spider-Man: Far from Home being the 6th, which incidently Marvel/Disney produced for Sony).


the hold steady | thrashing thru the passion

Elizabeth Smart's father announces he is gay and is divorcing his wife https://t.co/PxwHFYwvQM

Ed Smart, dad of Elizabeth Smart, announced he is gay, divorcing his wife, and also leaving The Church of Jesus Christ of Latter-day Saints.

"It is with this same spirit that I wish to share the news that I have recently acknowledged to myself and my family that I am gay, the decision to be honest and truthful about my orientation comes with its own set of challenges, but at the same time it is a huge relief."

Ed on leaving his church:

"As an openly gay man, the Church is not a place where I find solace any longer."

"Living with the pain and guilt I have for so many years, not willing to accept the truth about my orientation has at times brought me to the point where I questioned whether life was still worth living, I can no longer live trying to appease someone else's idea of who I should be, and have come to the conclusion that it was never my Savior's intent to change me from the way I was born."

Elizabeth has also released a statement:

"My parents taught me as a young child that they would love me unconditionally no matter what happened," she said. "While I am deeply saddened by their separation, nothing could change my love and admiration for them both. Their decisions are very personal. As such, I will not pass judgment and rather am focusing on loving and supporting them and the other members of my family."
_____

Honestly, good for him.

The comedy "Good Boys" started off this week's box office with $2.1 million on Thursday. The movie's expected to bring in around $20M this weekend (on a $20M budget).

Sony’s “The Angry Birds Movie 2” was released on Tuesday night, and has already brought in $5.7 million since, and is expected to bring in $16M-$17M this weekend (on a $65 million budget).

At the end, 'Hobbs & Shaw' is still expected to top the box office on this meh August weekend. In limited release are “Where’d You Go, Bernadette” (finally, and with meh reviews) and WB's critically-acclaimed “Blinded by the Light.” Welp, lots of movies out this weekend, so enjoy I guess.

Bruce Lee’s daughter, Shannon Lee, is responding to director Quentin Tarantino’s latest comments: “He could shut up about it. That would be really nice" https://t.co/oI1u1tIy52

Quentin Tarantino earlier defended the portrayal of Bruce Lee in his film citing a quote in a biography written by Lee's wife; "If people are saying, ‘Well he never said he could beat up Muhammad Ali.’ Well, yeah, he did. Not only did he say that, but his wife, Linda Lee, said that in her first biography I ever read. She absolutely said that.” The quote in the biography that Tarantino is referring to was not attributed to Lee himself but to a critic watching him fight.

When asked by Variety what Tarantino could do to rectify it, Bruce Lee's daughter Shannon Lee said “He could shut up about it. That would be really nice. Or he could apologize or he could say, ‘I don’t really know what Bruce Lee was like. I just wrote it for my movie. But that shouldn’t be taken as how he really was.'”

“[Tarantino] can portray Bruce Lee however he wanted to, and he did,” Shannon Lee said. “But it’s a little disingenuous for him to say, ‘Well, this is how he was, but this is a fictional movie, so don’t worry too much about it.’”

Opinion: If you're a feminist, you have to take those allegations against Katy Perry seriously https://t.co/c7C1hkQzjV

In recent events R.Katy has been accused of sexually harassing multiple victims. Some of her unwanted sexual abuse has been documented on live tv with the victims not consenting to her advances. Perry has yet to respond or release a statement for grabbing shawn mendes teenage ass, exposing Josh Kloss's penis or fondling and then trying to kiss Tina Kandelaki at a industry event, these are just a few examples of Katy's despicable behavior.

The independent gave a factoid: "When men are victims of sexual violence, they’re taken less seriously. Frequently, these victims are told to “man up” and “enjoy it” when they bravely come forward with their accusations. This rhetoric reinforces toxic masculinity and allows men to be victimized further as they may feel that their assault wasn’t truly an assault".

Yet Perry has yet to be “cancelled” or face much public condemnation, why does Katy get a pass?

Most know her as Manny Santos from Degrassi, but Cassie Steele has started a new band Psychocandy and their first single is now on SoundCloud and will be available on AppleMusic and Spotify soon!

NEW: Video shows thick, black smoke rising from the site of a small plane crash that was carrying Dale Earnhardt, Jr. and his family. Everyone on board, including Earnhardt, escaped the wreck, said the local sheriff. https://t.co/2nqljR6C5C pic.twitter.com/noizctpZVk

Dale Earnhardt Jr., his wife Amy, their 15-month old daughter, Isla and the family dog, Gus all survived a fiery landing in Elizabethton, Tennessee yesterday. The two pilots on board also survived.

Dale Jr. was on his way to Bristol to call the NASCAR race for NBC this weekend. Everyone on board was taken to the hospital for further evaluation, none of the injuries are said to be serious.

Supermodel Cindy Crawford on spell-check, confrontation and knowing when to change the subject.

Actor Peter Fonda has died at 79 years old from complications from lung cancer. He is most known for his starring turn in Easy Rider and appeared in 3:10 to Yuma, The Runner, and Ulee’s Gold. He was the only son of Henry Fonda and is survived by his sister Jane Fonda, third wife Margaret (Parky) DeVogelaere, daughter Bridget Fonda, and son Justin Fonda.

A Target employee (who is quite possibly braver than the Marines) has taken photos of the back cover of both the standard and deluxe editions of Taylor Swift's upcoming album Lover. It's the same list that I reported earlier this month, with a couple changes (the order is different, it's Cornelia instead of Cornelius, and it's Miss Americana not The Americana). There are also previously unmentioned "voice memos" on the deluxe.

The leaked tracklist also confirms the producers on the album: Jack Antonoff, Louis Bell, Joel Little, Frank Dukes and Taylor Swift. This means she did not work with Max Martin and Shellback for the first time since Speak Now.

UPDATE: Taylor released the tracklist on her own

ONTD: do you think Taylor is about filing a lawsuit against a minimum wage retail worker?

Set in a small Orlando-adjacent town in 1992, this dark comedy series stars Kirsten Dunst as Krystal Stubbs, a minimum-wage water park employee who lies, schemes and cons her way up the ranks of Founders American Merchandise (FAM)—the cultish, flag-waving, multibillion-dollar pyramid scheme that drove her family to ruin in the first place. Determined to make a better life for herself, Krystal dives deep into FAM, until her business begins to affect those closest to her.

You can watch the first episode below. (US only apparently, sorry)

Are you a stinker thinker, ONTD? 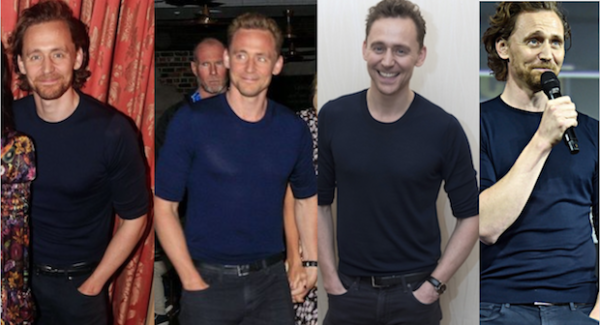 Tom Hiddleston was named the Most Stylish Man In The World by GQ in 2017... for his red-carpet suits. But in real life, he appears to have only one shirt: a blue tee with 3/4-length sleeves.

He has been wearing this damn shirt since 2015, according to my research... So, is it the only shirt he owns?

Open to: All, detailed results viewable to: All. Participants: 226

Is this Tom Hiddleston's only shirt?

- Whitney says she can't remember why she's not following Lauren on social media, but says she doesn't follow many people

- Article points out that Whitney follows 671 people on instagram

- Whitney is curious what Lauren thinks of the show

ONTD, why did you stop speaking to your former friend(s)?

Singer Sues Over Alleged Sexual Assault When She Was 14 https://t.co/Svhoz9BCTM


A singer has just filed a lawsuit claiming she was sexually molested when she was just 14 by her producer/agent/mentor.
The lawsuit does not mention the name of the girl or the alleged perpetrator.
It claims she recorded an album in 2005 when she was 14, and she was signed to a 7-album deal.
The lawsuit claims the entertainment company she worked with is "one of the most beloved, best-known and most valuable companies in the history of the world."
More at source because it's too horrible to even post here.

SPAM® is joining in on the pumpkin spice train by introducing their very own Pumpkin Spice SPAM®. What was once a joke on the Internet a year or two ago is now real because why not?

Where do we draw the line? But I digress...

The limited edition PSS will be available on September 23rd at your local Walmart and Spam’s online store.

Starbucks, Dunkin, and their PSL and fall flavors are shaking.

ONTD, would you try this?

Bidding has started on 'Shadow Force'.
Kerry Washington and Sterling K. Brown are attached to star in and produce.
The script is described as a fresh take on Mr. and Mrs. Smith.

• 2,000 men and women were surveyed about their underwear wearing habits

• Men are more likely to wear underwear for more than a week (Who is surprised?)

Head on over to the SOURCE for healthy underwear wearing tips and more!

So, ONTD, when's the last time you changed your undies? This is a TMI post, obviously.

Two more podcast have came forward with claims of plagiarism against Crime Junkie on @BuzzFeed https://t.co/zFQFAAKtIY