More casts get their photo taken on this first full day of SDCC.

Netflix has unveiled the first footage from their The Witcher adaptation.

The bubble tea (tapioca tea) craze has swept Japan big time, with countless Japanese, Taiwanese and American chains offering their drinks in Harajuku and the creation of specialized bubble teas like low sugar, vitamin infused or sun protection ones.

Scheduled to open from August 13th to September 16th, it will be located in the jing multipurpose commercial facility adjacent to the JR Harajuku Station. It will will feature:

-Numerous famous bubble tea shops with drinks and food starring boba pearls.
-Various photo booths so you can take Instagenic photos with your tapioca drinks
-Collaborations of all kinds, including appearances by and limited menu items designed with celebrities, and other attractions

This has stirred social media, with even celebs commenting on it, such as idol, Mirin Furukawa, being excited about it and becoming the third most popular trending hashtag on Twitter

The Limited edition Batman Beyond the Complete series remastered on Blu-ray out on October 29th and on digital October 15th.
Includes Batman Beyond: Return of the Joker pic.twitter.com/wtmeAA6XQj

-Batman Beyond is getting the remastered treatment and is due out Oct.29th but with a slight twist....

-Of the 52 Beyond episodes, 11 were not able to be properly remastered due to the original masters being damaged. And with the remaster...the grain of came with the show has been removed.

-The Return of Joker will be included with a brand new remaster apart from the recent blu-ray that recently came out.

-Bruce Timm claims if the set sells well enough there may be renewed interest in reviving the show.

The moms of Hawkins, Indiana lust over a more age appropriate? Gritty at the pools.

Last Week Tonight's John Oliver visits the Late Show with Stephen Colbert to talk about being intimidated by Beyoncé's theoretical presence, Boris Johnson's rise in British politics, and his existential terror over the current state of the world.

- Henry Cavill was asked a few questions about The Witcher and this was his reaction when the interviewer said 'cause you're still Superman'...

- The second teaser video for the film by Studio Khara was released on the film's official website on Saturday. 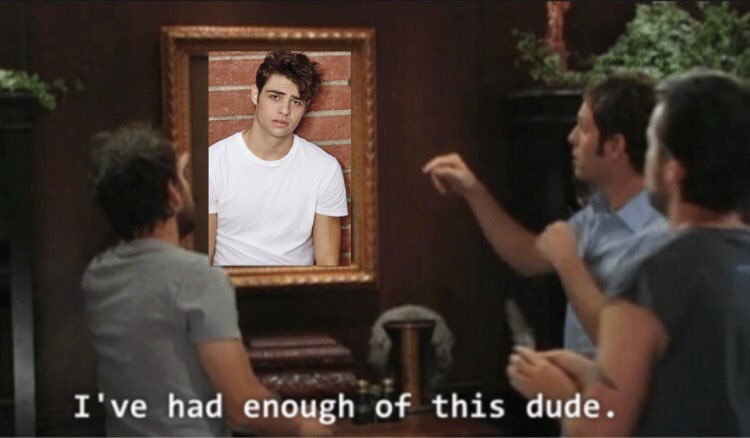 Noah Scented Mayo: Son, Brother, Actor, Philosopher? 🤔 Last year was quite the breakout year for Netflix’s latest rising star and “new heartthrob.” Things don’t seem to be slowing down for Centumblr: he’ll be in the upcoming Charlie’s Angels reboot, a sequel to To All The Boys I’ve Loved Before, and he’ll be playing He-Man in Sony Pictures and Mattel Films’ Masters of the Universe. Not since Harry Styles, Timothée Chalamet, Miles Teller, Ansel Elgort, etc have I seen such a mediocre and undeserving rise to stardom. But I digress...

Earlier this year I gave you Part I with 28 ~deep tweets. Somehow I present to you 36 more from this year alone. 36! He’s been busy tweeting more from January to July.

Separate yourself from others. Find somewhere quiet. Sit and Close your eyes and focus on deep breathes. Thoughts might come, just focus on your breath. Count them and see how many you can get and how slowly you can draw them out. Try to get to 20.

We asked @LeoDiCaprio if he could have fit on the door at the end of #Titanic, and his #OnceUponATimeInHollywood co-stars @MargotRobbie and Brad Pitt seemed to think so 😂😂😂 pic.twitter.com/nsOMZpXhFz

ONTD, do you think he could fit on the door?

Marvel has announced six new titles starting in October for the X-Men, spinning out of the event of the upcoming franchise-changing House of X and Powers of X minis (Make sure to #buyhouseofxoncomixology on Wednesday ontd!!). Each creative team was handpicked by the franchise's creative leader Jonathan Hickman.

Titles, creative teams, #1 covers and solictations for each below:

Taymor McIntyre — the rapper better known as Tay-K — was found guilty of murder at his trial in Fort Worth this morning.https://t.co/A1kj7kL9go pic.twitter.com/ZUsUvYHsXw

Tay-K was found guilty of murder on Friday in one of his cases and will be facing a 5-99 year prison sentence.

If you're unfamiliar with his story, Tay-K was placed on house arrest for this first murder case in 2016 when he was 16. He cut his ankle monitor off and then went on the run. While on the run, he was allegedly involved in another murder and he continued making music.

The day he was found and arrested again, he dropped a song on Soundcloud about his time on the lam. "The Race" was a viral hit and he famously signed a new record deal a few months later from jail.

Promo for 5X02, "Blame It on the Rain"- [Spoiler (click to open)]'Awake from the memory matrix, Dutch is determined to wake her friends and stop the Lady, before it's too late.'

Are you guys ready for this crazy ride of a show to end this season?

Promo for episode 6X11, "From the Ashes"- 'Out of answers and running out of time, the agents must face the ghosts of their past in order to move forward on.'

Yesterday at SDCC they released a trailer for the final 4 episodes:


Not feeling this season, but hopefully they end it well and deliver in the final season. 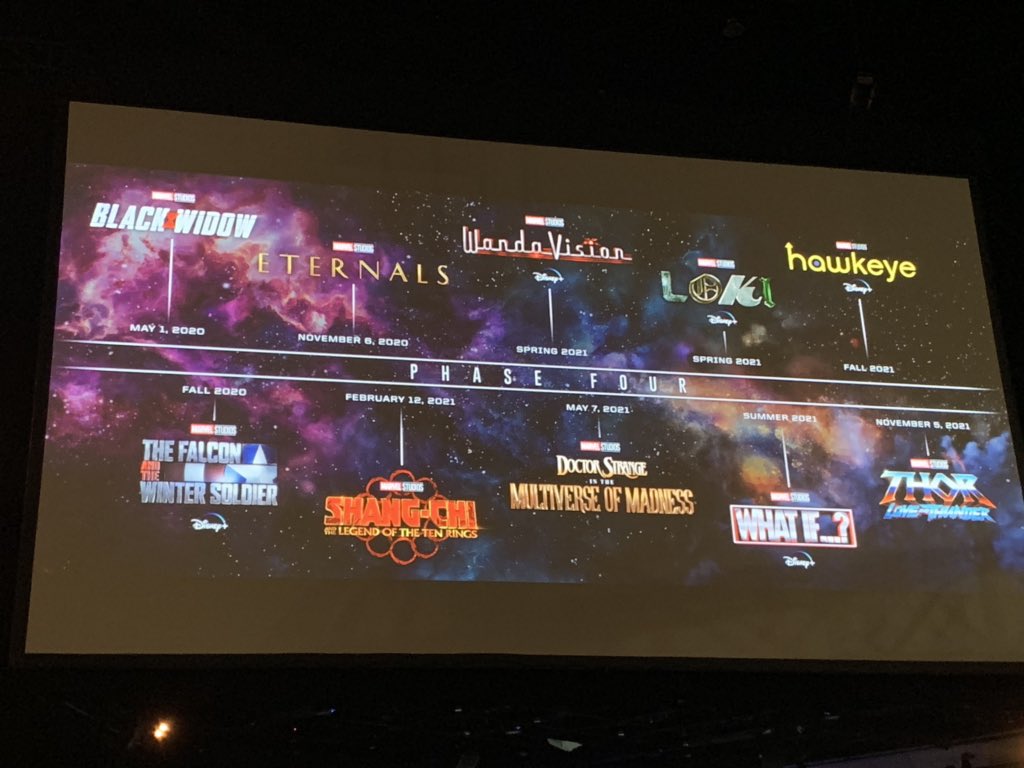 
Just announced in Hall H at #SDCC, Marvel Studios’ SHANG-CHI AND THE LEGEND OF THE TEN RINGS, with Simu Liu, Awkwafina and Tony Leung, directed by Destin Daniel Cretton. In theaters February 12, 2021. pic.twitter.com/VXaqJ5uN6B


Just announced in Hall H at #SDCC, Marvel Studios’ DOCTOR STRANGE IN THE MULTIVERSE OF MADNESS with Benedict Cumberbatch and Elizabeth Olsen. Scott Derrickson returns as director. In theaters May 7, 2021. pic.twitter.com/HtF68htiB1


Just announced in Hall H at #SDCC, Marvel Studios’ WHAT IF…?, the first animated series in the MCU, with Jeffrey Wright as the voice of The Watcher and many actors from across the MCU reprising their roles as voice talent. Streaming exclusively on Disney+, Summer 2021. pic.twitter.com/el6etc3xZH

Marvel released the new scene to promote the release on Blu-ray and digital on July 30.

See why the model says getting treatment was "the best thing that ever happened" to her (via @toofab)https://t.co/94xKbK5N45

-The 21-year-old model/daughter of Harry Hamlin and Lisa Rinna reveals she sought treatment for anxiety and depression
-She had moved to New York to start at NYU but fell into a depression and began attracting negative people into her life
-She also says, "I got trapped in a severely unhealthy relationship that pushed me over the edge" - she thought she deserved it
-Eight months into the relationship, she flew home to LA, and later went to rehab
-Rehab taught her self-respect and that saying no is okay, and concludes it's been the best thing to happen to her

Kristen Stewart Makes Out With Girlfriend Stella Maxwell On a Yacht (Pics) (via @JustJared) https://t.co/u7YQIxOspo

Ahoy, ONTD! Can you believe it's been 7 years since that cheating on RPattz/armpit-licking scandal?

It turns out that the rebooted "Veronica Mars" is a lot like "The Good Place."


this is a SPOILER post, stay out if you don't wanna get spoiled

Carrie talks about her new CALIA swimwear line and says its pretty and functional. Later, Carrie states that “I feel like with swimwear, growing up in my teenage years, early 20s, I couldn’t wear a triangle swimsuit." Even presently, "I can’t do it, it’s not going to happen. It would never have happened.”

Mark the date, July 20, 2019 (also the same day Marvel's announcing Phase 4 at SDCC): Marvel and Disney's 'Avengers: Endgame' is now the number one grossing movie of all time, internationally (it's second domestically behind 'Star Wars: The Force Awakens'). This is without inflation consideration.

On Saturday, the movie crossed $2.7892 billion at the global box office, and will exceed the $500,000 in ticket sales needed to surpass 'Avatar's' $2.7897 billion gross. We should probably expect something from James Cameron pretty soon.

Just announced in Hall H at #SDCC, Marvel Studios’ SHANG-CHI AND THE LEGEND OF THE TEN RINGS, with Simu Liu, Awkwafina and Tony Leung, directed by Destin Daniel Cretton. In theaters February 12, 2021. pic.twitter.com/VXaqJ5uN6B

Cardi B responds to accusations that she's a rapist:

Earlier this year, Cardi B faced a backlash after an old video in which she admitted to drugging and robbing men when she was a stripper surfaced.
The controversy surrounding her admission has now resurfaced after people have accused her of being a rapist.

"I don't like when people be trying to call me a rapist. I don't like that shit. Because people tried to dig up something and make it something that I didn't do. I never touched nobody, I never fucked nobody. And rape is when you fuck somebody without their consent or without asking."

"Bitches don't have to put shit in n***as' drinks, these n***as be going to [the] club getting drunk and getting high. I never put shit in n***as' drinks. Yeah, I went through n***as' pockets. A lot of you bitches be going through n***as' pockets for $40 to catch a cab 'cause a n***a don't want to give you that. Same shit. Was I wrong for that? That was wrong, but I never fuckin' hurt nobody."

"Disney is damned if it does and damned if it doesn’t—and these iconic animated villains are caught in the crossfire."@SLAwrites explores @Disney's history of queer-coding villains—and how the practice holds up in 2019 @disneylionking @disneyaladdin https://t.co/AgkE89xhib

The article talks about Disney's history of villains who could be read as queer-coded, how Jafar and Scar aren't as fun in the new remakes because those traits have been removed, and what this might mean for Ursula in the upcoming Little Mermaid film.

"Disney’s old habit of queer-coding villains may have been wrong and even hurtful, but the result was a roster full of delightfully entertaining, often scene-stealing characters that young viewers could interpret as LGBTQ. It wasn’t perfect representation, no, but it was representation nonetheless."

- Variety has uploaded the full panel and now you can watch the full announcement online. Among the announcements we had:
* BLACK WIDOW: Action film. Set after Civil War. Flashbacks to budapest.
* ETERNALS: Starring Angelina Jolie, Richard Madden, Kumail Nanjiani and Salma Hayek. Also featuring the first deaf superhero and actress of the MCU. First female-asian director of the MCU.
* THE FALCON AND WINTER SOLDIER: Daniel Bruhl (Zemo) is coming back.
* SHANG-CHI AND THE LEGEND OF THE TEN RINGS: Starring Simu Liu (my new husband) and Awkwafina. Tony Leung is playing THE REAL Mandarin.
* WANDAVISION: Teyonah Parris has been cast as grown up Monica Rambeau. Set in the 50s, but after Endgame.
* LOKI: Set after the events of the first Avengers film in 2012.
* DOCTOR STRANGE IN THE MULTIVERSE OF MADNESS: Scarlett Witch joins the film. direct sequel of Wandavision. First scary marvel film.
* WHAT IF: Most people are coming back to voice their old characters.
* HAWKEYE: Will feature Kate Bishop and the return of Jeremy Renner.
* THOR: LOVE AND THUNGER: Chris Hemsworth is coming back. Valkyrie is confirmed LGBTQ+. NATALIE PORTMAN IS COMING BACK TO PLAY FEMALE THOR. WHAT.
* BLADE: Mahershala Ali has been cast as Blade.
* FANTASTIC FOUR, BLACK PANTHER 2, CAPTAIN MARVEL 2 AND GOTG VOL. 3 are in development.

ONTD, what are you most excited about?

Too long to wait, but the footage got me hyped for season 4, I missed the Roci posse.