Postcards sent to the Museum of Man in Balboa Park.  posted to the San Diego PostSecret exhibition the on the second floor


"Every week I still feel like a kid Christmas morning, with all these kind of gifts to go through," said Frank Warren,

Secrets likes this: "When people I love leave voicemails on my phone, I always save them in case they die tomorrow and I have no other way of hearing their voice ever again."

In a blog post Warren copied emails from two mad participants in the PostSecret community. Both complained about his permitting the “trolling” of secrets on Instagram. The first states, “It’s really sad how hurtful people are and you just let them be"." PostSecret was always a safe place. Wasn’t that why you created [it]? So people could express themselves without feeling like they would be judged and/or mocked. Now it’s become a place for bullies, trolls and harassment. It breaks my heart.”

The second is longer. It reads in part, “I feel disappointed and betrayed by PostSecret. I’ve watched your videos, TED talk, interview on TED Radio hour and your message is consistent: secrets are powerful, vulnerable and, and in your own words the ‘currency of intimacy.’”
Frank Warren is a man so yea he sucks read if ya want source

reasons this is relavent his podcast/instagram presence also book author

this is my last attempt at a secret post ~

STAR TREK: SPOCK and NUMBER ONE to Return in SHORT TREKShttps://t.co/YOgC9AKvQF pic.twitter.com/SjtIZxQJPZ

- There will be 4 more Short Treks eps before the third season
- Ethan Peck (Spock) and Rebecca Romijn (Number One) will be in the ep entitled 'Chaos Theory'
- Previous Short Treks tied into the plot
- It's apparently written by Michael Chabon who wrote the Short Trek ep 'Calypso' and is the Picard showrunner
-[pic from director&apos;s insta]

- Sarah's blaccent is understandably heated! Micheal gaslights the hell out of his pregnant wife so that way he can be an even more absent father and he and his ankle monitor can *Toni Braxton voicce* "breeve again"
- water + cheetos = Michelin star rated cheese!
- Lizzie's Bubbies almost called Scott after her failed date (if you forgot, Lizzie's date asked her to split the check after throwing back more magaritas than he intended after hearing about Lizzie)
- Clint and Poppa Clint is handling meat with no gloves!!!!!!!!!!!!! Clint is their only child and I'm sure his parents think about that a lot.
- Did Black Mormon Weave Lady who Throws Phones in Lime Displays' youngest child just call Lamar "papa"?
- smort, mature, intelligent children Tennyson and Nyla are not as receptive (high key, OP wants these kids to be her life coach, she'd get so much shit accomplished and she probably wouldn't be watching this show)
- Brittany and Marcelino see a lawyer because Brittany's ex filed for full custody behind her back and it sounds like Marcelino has been stepping up to be a good father figure for Giovanni
- Lizzie's Enthusiastic Bubbies are taking a trip to see Scott
- "Momma Clint and Tracie are like 12PM and 12AM"
Source

This episode has been brought to you by--- wait, is you ovulatin'?

The panel on The Real (Adrienne Houghton, Loni Love, Jeannie Mai, and Tamera Mowry-Housley) discuss if having a destination wedding is rude to your family and friends. Bank Rate recently asked its readers if they thought it was in poor taste to plan a destination wedding: 56% said yes, 19% said they had to decline an invite because they couldn’t afford to go.

- Apparently the 'Spiderman: Far From Home' cast loves Watchmojo.
- Watchmojo interviewed them for press and she did the 'Welcome to Watchmojo' voice.
- They died.

ONTD, favorite Watchmojo videos? Do you agree with this list?

Former front man of New Radicals Gregg Alexander one day decided he was tired with the performer lifestyle and stuck with the songwriter/producer side of the music industry. When artists write for other artists, their work tends to lend out signature sound that can be instantly recognizable whether through certain melodies or ad-libs (Sia comes to mind). What sort of characteristics come to mind to to a Gregg Alexander song? - feel good chords, schmaltzy but also cheeky lyrics, and a lot of falsetto moments. Here are 10 songs we're all still jamming to after all these years.

An encouraging song to be yourself from her album Shoot from the Hip.

Do you have any Gregg Alexander-penned favs?

- It's a dark, gothic tale about three nuns, each a generation apart, living in an isolated convent by the coast, and an unwelcome visitor who enters their lives and changes their world forever 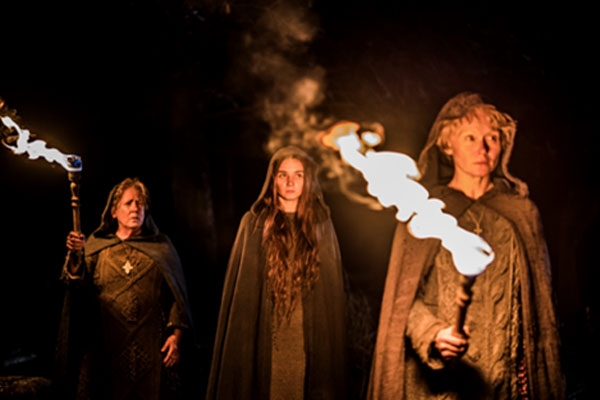 - Based on a book by Marele Day and is 4 eps

The recently married actor Chris Pratt took to Instagram on Saturday to share a photo of his sunburned self.

“Suns out guns out,” he captioned the NSFW photo with the hashtag #Aloe. “I might have got a toouuuch crispy on the honeymoon,” he added.

In the photo, you can see Pratt’s sunburned back and his pale ass.

Gwyneth Paltrow offered some help while self-promoting her lifestyle brand.

“I’ve got some goop for that,” she wrote.

See more behind the cut but you’ve been warned.

ONTD, have you ever gotten sunburned badly?

media critic, lindsay ellis, has created a new video essay rightfully flaming critiquing the hot ass mess that was the end of a decade long emotional investment for some, a conversation that wouldn't die for others, and a mega cash grab for hbo.

ontd, have you fully purged the stench of d&d's obvious failure from your mind or do you have more hate in your heart to share? was your loyalty to game of thrones rewarded at the end by having you doing your best boo boo the fool impression or did you actually enjoy that dumpster fire?

DID ANYBODY GET FOOTAGE OF THE SECURITY GUARD THAT TACKLED AND ATTACKED MY TEAM @SUMMERFEST ?!

Lizzo said that Summerfest was investigating the incident.

Friendly reminder that you don’t have to say the ‘n word’ to be racist. That’s not the sole requirement. Asking people to prove racism is another tool the oppressor uses to marginalize and discredit us.

Cardi b tried to catchphrase 'okurrr' back in March, to be used mostly for merchandise.
Government officials have officially rejected her application to lay claim to the word.
The slogan fell under the category of 'widely-used commonplace expressions.'
The phrase has existed in minority communities for years.

You don't have to wait to for #SNL to watch Kate McKinnon's Marianne Williamson impression: https://t.co/M3CIS4tAqq

- Seth shows a picture of Kate as Elizabeth Warren and notes that Warren was dressed in the same outfit at the debate as Mckinnon was on S.N.L. she does a short Warren impression at:32 mark. McKinnon as Warren" I got a olan for my fight and a fight for my plan".

- Mckinnon as Williamson." I've heard a lot of plans tonight and if we think plans are going to beat the president we've got another thing coming". My plan is to gather all the sage in America and burn it. My plan is to harness the energy of babies to finally put a man on the moon. And I said to the president of New Zealand, I said girlfriend your so on and I would say to the president boyfriend you chill, Thank you!

Ontd: Do you think Marrianne Williamson will make it to the fall?

"Yesterday" is in theaters now

Promo for 6X08, "Collision Course (Part 1)"- 'To face The Galaxy-Hopping Hate-Beast That Eats Planets, the team on Earth asks for help in all the wrong places. While back on the Lazy Comet, something weird is going on with Izel’s crew, and it's not just the puffies.'

So this is the casting call description of Queen from #QueenandSlim @LenaWaithe I want to like this movie but this is cringe honestly. I’m tried of this struggling, rough, and desperate depictions of darkskin women smh. pic.twitter.com/MtvHBSb9Sf

Casting Call for Queen
"She is brown-skinned, if she were a slave she would've worked in the fields, she has a tough exterior for a reason."
Queen is played by Jodie Turner-Smith.
The movie is written by Lena Waithe.

Chrissie’s new video about Queen&Slim sent meeeee. The casting directors really asked for a “field slave” looking black woman 😂 Am I really surprised at how messy and poorly thought out this movie was https://t.co/UyHUlmkiU7

The fact that on the casting you put a brown skinned woman who if she were a slave would be picking cotton makes me absolutely sick! @QueenAndSlim https://t.co/msmASoRtUm

"if she was a slave, she would have worked in the fields" was in the casting call description for the role of Queen. That makes me not want to watch this. CUT THAT BULLSHIT OUT. 😠

- Jess Glynne announced that she has been advised by her doctor to cancel her upcoming shows until July 14th, as she has suffered from a vocal chord haemorrhage.
- She previously cancelled performing at Radio 1's Big Weekend during the Spice Girls tour, and Isle of Wight festival the day after the tour ended. She has since been banned from performing at the Isle of Wight festival again.

I Swear by All-4-One
source

ONTD, we're about halfway through with 2019. How has your year been going? Anything special you are looking forward to doing before the year ends? Had any cheap thrills thus far?

Martin discussed his nostalgia for the early days of fan culture.
“Going all the way back then to my beginnings, I was a comic book fan. That was the fandom I was involved in, writing superhero stories for little comic fanzines.”

Martin says internet fan culture is “toxic.”
“Now you can Tweet and Facebook, but I don’t know that’s an improvement! The internet is toxic in a way that old fanzine culture and fandoms … in those days, was not. There were disagreements. There were feuds, but nothing like the madness that you see on the internet.”