The "Lucifer" costars get cheeky when explaining what it was like getting intimate with each other on the Netflix series. Tom imitates American accent, and Rachel jokes that she's so old that she's like the Joe Biden of women, she can just touch Tom and be like 'oop I'm sorry I just touched you accidentally'

Who took the best selfies on set? Sophie Turner, Maisie Williams and more 'GoT' stars spill on-set secrets in 'Game of Phones.'

Turner has Beth (Christina Hendricks) in checkmate. The women must contend with a rotten egg from the past. Rio (Manny Montana) makes a grand gesture for Beth, and a new business opportunity presents itself.

* Things are unbalanced as a result of Macy undermining destiny by undoing Galvin's sacrifice for humanity.

* After making a breakthrough with powered up Macy the sisters transfer the source's power into Macy's necklace & separate its broken pieces at different places in the world.

* With the council of elders now all deceased the supernatural being they've helped during the season elect to make the sisters the new ones.

Hozier played at the Hangout Music Festival in Alabama yesterday and had some strong words re: the state’s recent anti-choice policies.

@Hozier at Hangout Fest, absolutely amazing! Thank you! So much respect! pic.twitter.com/RCvkLo9WwZ

[transcript here]
"…And I know what happens when they act, and they act directly. I also know what happens when old pious men make laws about what women should and shouldn’t do with their bodies. I know this ‘cause I’ve seen direct action form the very state that I hail from, the nation state which was created 100 years ago. And what I would say also, remember where power lies and remind politicians where power lies.The biggest thing they fear is losing their fucking jobs.

And to men, also: just be wary of any mentality that would make cattle or vessels of women. Because that same mentality will make machines and tools of you. And make monsters of you. Just remember where power is, just remember what the electorate can do."

Hozier has long been an outspoken advocate for reproductive rights, and in 2018 released a video urging his Irish fanbase to vote in the referendum to terminate the Irish 8th amendment, which gave a mother and their unborn child "equal right to life," effectively banning abortions and forcing some 170.000 women to travel to other nations to seek termination since 1980. Abortion up to 12 weeks of pregnancy has been legal in Ireland as of January 1, 2019.

The music video for his song ‘Nina Cried Power” features several Irish activists, among them Anna Cosgrave and Saoirse Long, whose work has been instrumental in the fight for reproductive rights in the country.

He is also donating a portion of his fee from the festival to The Yellowhammer Fund and the Abortion Support Network.

In a new IG post this morning she states that her boyfriend, Been Shattuck, is announcing a new music residency for Celtic musicians in August, at which she may be hanging out. In addition to music, Shattuck also appears to be a writer and art curator.

Shattuck confirmed the relationship on his own IG yesterday with a picture of Slate captioned, "Dream date at the record store."

Are you a Celtic musicians, ONTD?

Apologies for any errors mods, I'm doing this on my phone at work at it's been 84 years since I've made a post.

Joshua Jackson, fresh off 'The Affair' and appearing in this month's 'When They See Us' on Netflix has signed on to the Hulu adaptation of Celeste Ng's bestseller 'Little Fires Everywhere.' He will play the husband to Reese Witherspoon's Elena. Kerry Washington also will star.

The Witherspoon/Washington executive-produced drama will be an eight-episode limited series about two families amid a custody battle. The series will explore "the weight of secrets, the nature of art and identity, the ferocious pull of motherhood — and the danger in believing that following the rules can avert disaster."

#GameOfThrones ends not with a bang but a whimper https://t.co/DVWu04KIEl


So how are you feeling ontd? Share some memes to make it better!

After the infamous Starbucks cup incident the 'Game of Thrones' finale featured a visible water bottle on set during one of the final scenes.

a water bottle in King’s Landing!! #got #gameofthrones pic.twitter.com/mwGQlsLwnh

The co-hosts discuss the series finale of Game of Thrones. Meghan spoils the ending because she's the worst. She gets super defensive ("I'm sorry you guys are so triggered") and says she watched the episode last night ~like everyone's supposed to. Sunny says she's only on Season 4, Whoopi stopped watching after the Red Wedding, and Joy has never watched the show.

Open to: All, detailed results viewable to: All. Participants: 313

Who would you have voted for?

In the season finale of #Charmed, the sisters were forced to contend with a power-hungry Macy. We have several questions for season 2 of the series. https://t.co/0qik0BwY2U


what did you think about the finale?

Hey, Jack In The Box I have a serious complaint but I won’t fully put you on blast, check your corporate email inbox or send me a DM with direct person for my team to contact. Pronto!

On Monday, Kim Kardashian took to Twitter and urged Jack in the Box to contact her immediately. "Hey, Jack In The Box I have a serious complaint but I won’t fully put you on blast," tweeted Kim. "Check your corporate email inbox or send me a DM with direct person for my team to contact. Pronto!"

ONTD, have you ever asked to speak to a manager?

They say you can't believe your eyes but turns out you shouldn't trust your ears either.

Madonna's official VEVO upload of her controversial Eurovision performance features significantly better vocals than the ones broadcast live to 200 million on Saturday night, as it appears that most of the audio has been smoothed over in post. Maybe now people can notice the performance's messages rather than having to deal with the second-hand embarrassment of Madge's dodgy vocals? Who can say.

Madonna performed her iconic hit Like A Prayer and Future, a new collab with Quavo off her forthcoming album Madame X.

His thoughts on Jaime having sex with Brienne:

"I was shocked. I never thought it was going to happen. They survived. There’s this party. They buried the dead. There’s this enormous relief. We did it. There’s drinking and happiness. And there’s flirting and she leaves and he goes to see her in her quarters, and suddenly it happens. There’s the classic moment after where he’s like, “Oh no,” and reality sets in not long after. The battle for King’s Landing is looming. He hears this very specific talk between Sansa and Brienne, and you know Daenerys is going to torch the place. So he decides he has to go back to his sister".
( Collapse )
Read full interview at SOURCE
SOURCE

Well, we made it through the first night, now the dates begin.

Adrianne and Scott married yesterday (May 19th) in Austin, Texas. Ming-Na Wen was among those in attendance and posted some pictures from the ceremony. This is his third marriage.

Rita just purchased a house for her parents in their home country of Kosovo.

She reportedly spent 1.5 million pounds on the home.

She also explained her career which she says is different from other people's.

When she was younger she'd go into meetings like "hey, this is me" and they'd tell her "this isn't working".

She's done many albums that no one will ever hear.

"I did everything I could possibly do to be in everyone's faces at all times cause I was like, you ain't fucking getting rid of me. That's not happening. I did Adidas clothes, I designed clothes, I did TV shows, I did films, I do music for the films, I did anything! So people could be like 'oh, alright well, I guess this bitch is staying'".

She rented a gorgeous, $6.5 million Chelsea apartment for a few months while filming “Hustlers”

The owner was appalled when Wu moved in and brought her pet bunny, Lida Rose, without permission.
Wu allowed the animal to hop, defecate and pee freely all over the place.
The housekeeper raised the alarm after being forced to clean up the revolting rabbit mess.
Wu was warned a number of times to keep her fluffy beast in its luxe hutch.
She ignored the warnings, and let it repeatedly hop around.
The fed-up owner eventually called the actress’ management and threatened to throw her out.

- Ed Sheeran and Justin Beiber debut at No. 2 (which isn't a surprise). Callback scores are high on "I Don't Care" and it isn't a flop yet.

- Fading Pop Princess Taylor Swift drops to No. 8. ME! is her worse performing lead single since her Speak Now album. Callback scores are low and the general public isn't into it.

In "Damn, what happened." news, Jason Mitchell (Straight Outta Compton, Kong: Skull Island), was dropped from Season 3 of The Chi, a Netflix romantic comedy Desperadoes, and is no longer represented by UTA or Authentic Talent and Literary Management.

There was an alleged 'off-set incident' while filming Desperadoes, but no parties would comment with further details, though rumors on other sites suggest inappropriate behavior.

From award-winning writer Russell T Davies, Years And Years is a brand new six-part drama which follows the lives of a single family, the Lyons, over a period of fifteen years in a Britain rocked by unstable political, economic and technological change.

Clip is for the preview next week, written below is the recap

- now that the wedding shit is out of the way, let's get to the real mess
- Karen and Ray go to get headstones made for Karen's parents who tragically succumbed to their battles with Alzheimer's
- Her Brokeness is still behind on flipping this raggedy ass house
- Gizelle goes to couples therapy without Sherman and sis realizes she never gives people chances and she needs to (shit me too, LightBright!)
- former cast member Katie makes an appearance
- Kurn sages her home and Gizelle so the former first lady's hate ration doesn't corrupt her staged home
- Ashley and Michael hold a birthday party for her uncle where Gizelle looked fabulous, Candiance was complaining again and Mike was complementing some guy's musculature. Michael misses Juan (shit me too!)
- Robyn then says that Michael alledgedly says, "Yeah, I'd suck his dick" meaning we are heading full force into this storyline
- Monique makes a two second appearance and she looked fabulous and her Bentley repaired

This episode has been brought to you by the excessive amount of Coronas in the fucking episode. 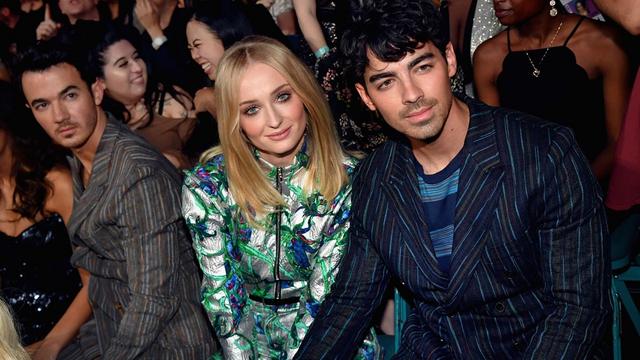 In an interview with The Sunday Times, Sophie Turner said that she and Joe Jonas actually broke up for a day before the wedding, noting, “It was the worst day of our lives. For a second we both had cold feet, then 24 hours later we were both, like, ‘Nevermind.’ “

Turner and Jonas married in early May in Las Vegas after the Billboard Music Awards.

Sophie also got super honest about the public nature of her relationship with Joe, saying the love they share makes it all worth it:

"Happiness has just trumped it all," she said . "You want to be normal, go out without the fear of people hounding you, but if I'm happy then I'm not going to give that up to be private."

Did you get cold feet before your wedding, ONTD?

Taron with his girlfriend Emily Thomas