The Good Fight season 3 airs/drops on Thursdays on CBS All Access.

Did you watch the premiere yet, ONTD?

From Hawkeye's hair to the new space suits. https://t.co/WpnvmdqINu

Including things several ONTD-ers have speculated about.

- Season 3 takes that feel-good sensation to new levels with the first makeovers to a duo and a lesbian.
- Karamo is the MVP this season. Every moment he went into the spotlight, he shined.
- People are criticizing them a bit for spending too much on the renovations.
- Season 3 is streaming now on Netflix.

ONTD, have you started season 3? Los Angeles Times writer Lucas Kwan Peterson is back at it again and returns to rank the sweeter side of breakfast cereals. As some may remember, last month Peterson ranked most fast food french fries and people weren’t having it. In his latest article titled The official breakfast cereal power rankings: Part I, a highly confident and bold Peterson explains his ranking style and writes, “I am, therefore, thrilled to present to you the highly scientific, unimpeachable and 100% correct L.A. Times Breakfast Cereal Power Rankings. These rankings deal solely with cereals on the sweet side of the spectrum, as comparing Lucky Charms to, say, Fiber One wouldn’t make a whole lot of sense. Non-sweet cereals will be judged in a future ranking.” Fiber One fans everywhere are upset and shout “y’all lack taste AND fiber.” So grab your breakfast (cereal perhaps?) this morning and let’s proceed.

ONTD, do you agree or disagree with these rankings?

Firstly, @MarkRuffalo if it’s for charity then I’ll forgive you. Secondly, you also stole my pillow...which was kinda weird. Are you auctioning that off as well or just for your personal use? https://t.co/QfpzJtKZjF


So Mark Ruffalo stole Mjolnir from his drawer-bed in Thor's nightstand. Donate here to enter for a chance to be flown out to the premiere and the chance to take home Mjolnir, signed by the whole cast while supporting Stella Adler Academy of Acting & Theatre. CHemsworth then accuses Ruffalo of stealing his pillow as well...

ONTD, what creepy item would you want to steal from your fav?

@jess_hilarious you are racist af & sound so damn ignorant. The Sikh man was minding his business, is that what you felt THREATENED about?! #JessHilarious pic.twitter.com/b2DdZJYvU5

One day after 51 Muslims were massacre’d in New Zealand, Jess Hilarious, Instagram “comedian” and cast member of Fox’s Rel, jumped on her Instagram story to brag about 4 Sikh Men in turbans being removed from her flight. She says their presence made her “scared. When fans began calling her out for her Islamophobia on her Instagram Live, she began cussing them and calling them names.

This isn’t the first time Jess has showed that she is truly a despicable human being. She came under fire a few months back for calling her gay fans faggots in her Instagram comments.

.@elizadushku opens up about her brave decision to speak out against #MichaelWeatherly and #Bull https://t.co/F7Huj1Odor

For those who don't know (follow-up to this post):
- [Jan. 2018] She reached a $9.5 million settlement with CBS after being fired from 'Bull' after informing the producers of Michael Weatherly's sexual harrassment on set.
- She signed a non-disclosure agreement, but she spoke out about it anyway like a fucking boss.

On ignoring the confidentiality clause:
"We need the right to stand in our power and in our truth. When you rob somebody of that or when you threaten somebody, it’s really damaging."
- She says it was more important to her to tell the truth and face the consequenses.
- Was not comfortable with the "false narrative that had been propagated".

On being stepped on, even late in her career:
"I’ll say this, in my case what made me feel a responsibility was the fact that I had been around for so many years. I have been around for almost 30 years. I had worked and built myself up to a place where you know I wasn’t off the bus and yet on a set I didn’t have a voice."
**Note: her first professional film credit dates back to 1992

The new adaptation of Pet Sematary closed out SXSW and has been getting great reviews. OP is officially excited!

To everyone who are like “the trailer to #PetSematary gave everything away”, I’m just gonna sit here and LOL cause you have no idea what you are going to experience

There are a ton more reviews if you search the hashtag on Twitter!

Some pics at the premiere.
( Collapse )

Lastly: I'm jealous of anyone who got this poster.

What did you watch this weekend, ONTD?</div> 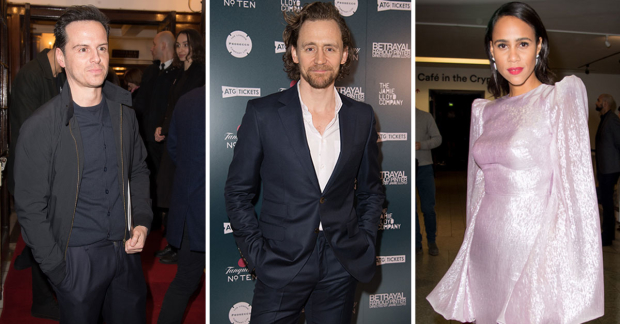 Tom Hiddleston made a rare public appearance to celebrate the debut of Betrayal, the Harold Pinter play that he's starring in. His next big project is the Loki TV series for Disney's streaming service. He will apparently not (?) appear in the next Avengers movie.

The play follows a man and woman as they have an affair over several years. Zawe Ashton plays the starring female role, and Charlie Cox Andrew Scott (aka Moriarty from "Sherlock") plays the other male role. (Moriarty was just as the premiere.)

ONTD, do you have any plans for today? Do your friends still try it and pinch you if you aren’t wearing green?

-Previously, there have been many Harley Quinn leaks. The A-list supervillian will have numerous iconic costume changes.

Margot Robbie on set of ‘Birds of Prey’ as Harley Quinn pic.twitter.com/94YcirPW0w

THE CURSE OF LA LLORONA Confirmed as a THE CONJURING Spinoffhttps://t.co/0xLck9t8MY pic.twitter.com/5mIXcinMNS

-After the film's premiere at the South by Southwest festival in Austin, Texas, the film is confirmed as the latest spinoff to follow films like Annabelle and The Nun.

-It's unclear if this was always planned to be a spinoff of The Conjuring, or if the producers found an opportunity to tie an original film to the franchise and increase its box office.

-It is speculated this was a last-minute decision because the director of this movie will be directing The Conjuring 3.

-This means there are 2 Conjuring Universe films coming out this year. Annabelle 3 comes out in June.

-Warner Bros. already has 3 Conjuring Universe films scheduled for 2020 with Conjuring 3, a spinoff of Annabelle 3 featuring a cursed monkey toy, and a new demon.

She’s coming for your children. Check out exclusive art by @GrecoFlavio. The Curse of #LaLlorona in theaters April 19. pic.twitter.com/82Xnyy6W2D

I knew what was gonna happen and it still wrecked me 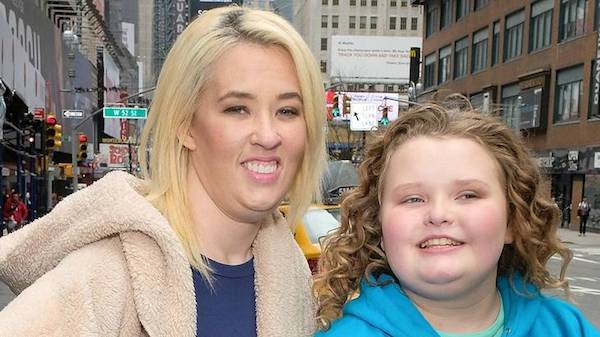 "Mama" June Shannon, mother of Honey Boo Boo aka Alana, was arrested on suspicion of felony possession of a controlled substance and drug paraphernalia at an Alabama gas station.

Mama June and her brood have had a rocky history in the limelight. They had a reality show called Here Comes Honey Boo Boo for four seasons, until it was revealed that June's boyfriend had spent 10 years in jail for molesting June's then 8-year-old daughter, Anna. But Mama June soon got another reality show where she lost 300 pounds and dropped to a size 4. She is divorced from "Sugar Bear," Alana's toothless father who is apparently not in her life.

A day after the terrorist attacks in New Zealand where 50 Muslims passed away and more than 40 were injured, Kathy Griffin tells a Palestinian Muslim woman she doesn't know what bullying is. She also calls her a pussy.

OP Note: This is peak white feminism. Use minorities as props when it helps them. Tear us down when we dare speak for ourselves.

Kate Winslet & Saoirse Ronan were spotted this past week around England filming scenes for their upcoming period romance/drama "Ammonite", set for release sometime next year (no doubt around awards time). Here's a summary:

The story is set in 1840s England, when real-life fossil hunter Mary Anning (Winslet) and a young woman sent to convalesce by the sea develop an intense relationship, altering both of their lives forever. Anning is credited with making key scientific discoveries in the Jurassic marine fossil beds in the cliffs along the English Channel.

This is directed by Francis Lee, whose last movie was the critically-acclaimed 'God's Own Country'.

The story is focusing on new characters but taking place in the same story universe https://t.co/yr29SLnEok

- According to The Hollywood Reporter, development is in the very early stages.
- AMC will take over the broadcast from BBC America.
- The story will focus on new characters but it will take place in the same universe.
- After The Walking Dead ratings took a hit recently, AMC believes that a name brand with a built-in fan base is a good business proposition.

won't get my hopes up, but it could work

-American Gods 2x03 "Muninn" Season 2 Episode 3 Promo - As he is tracked by Mr. World, Shadow makes his way to Cairo, thanks to a ride from Sam Black Crow; Mr. Wednesday slyly gains Laura's help in forging an alliance with a powerful god.

-AG has also been picked up for a 3rd season!

Fans have pulled up clips from his podcast in which Shane Dawson admits to sexually abusing his cat.

can we just stop supporting shane dawson? to me black face pedophila or BEASTIALITY is never a joke. pic.twitter.com/xeDJUIwkjd

-At a recent concert at the Houston Rodeo, Camila Cabello covered Selena's Dreaming of You.

-Charmed 1x16 "Memento Mori" Season 1 Episode 16 Promo - VISIONS — Macy (Madeleine Mantock) is not able to trust herself due to her memory lapses, so she asks Harry (Rupert Evans) and Charity (guest star Virginia Williams) for help. Stronger than she thought she was, Macy starts to piece things together and is eager to share her vision with her sisters. Meanwhile, Mel (Melonie Diaz) and Maggie (Sarah Jeffery) are worried about Macy and turn to an unexpected source for help. Nick Hargrove also stars. Norman Buckley directed the episode written by Emmylou Diaz (#116). Original airdate 3/24/2019.

Rio’s new business opportunity for Beth leads to a fracture in her relationship with Annie.