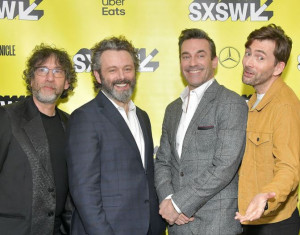 The Daily Mail published a story late Friday about the SXSW panel for the upcoming Amazon Prime miniseries 'Good Omens', based on Neil Gaiman's book of the same name.

Gaiman acted as showrunner for the one-off series, in which David Tennant and Michael Sheen star as a demon and an angel out to sabotage the coming End of Times. Gaiman, Tennant and Sheen were all present at the panel, along with Jon Hamm, who plays God.

Gaiman took to his twitter account (on which he is very active) to blast the Mail's typically stellar journalism. The anonymous Mail writer focused almost exclusively on the outfits worn by the four men in an article which was full of grammatical errors and mistakenly identified the panel as a premiere.

Completely bizarre Daily Mail article, possibly written by something not human, like an elk. My favourite line is, "Good Omens is based on a fictional book of the same name."https://t.co/ofwJX6Pgzr

"Men of the hour: Joining the Mad Men actor was co-stars Michael Sheen, 50 and David Tennant, 47"

Possibly copyedited by an elk. https://t.co/OzBuUnq5mB

Ariana Grande's pre-recorded performance of 'Needy' at The iHeart Radio Music Awards 2019 (she won Artist of the Year). She wasn't there because she's gearing up for tour.

.@Pharrell presented @ArianaGrande with her iHeart Radio Music Award for Artist of the Year! 🖖 #iHeartAwards2019 pic.twitter.com/TmCwEoHCb9

"Thank you! It feels amazing, I am so honored. I will sleep with this [award] tonight."

One • Two
Are you needy?

It's Been 25 Years Since Selena's Grammy-Winning "Amor Prohibido" Debut https://t.co/VTacQHXXXr

The album included same named hit single, along Bidi Bidi Bom Bom and techno cumbia. The Grammy-nominated album became the first Tejano record to peak at number one on the Billboard Top Latin Albums chart, remaining in the top five for 98 consecutive weeks!

The Tex-Mex queen untimely passed away on March of 1995

Can you do the famous Selena pirouette while singing amor prohibido, ONTD?

ONTD, are you gonna stay with Tumblr until the bitter end? i mean, you're in Livejournal after all...

Comic Relief’s annual “Red Nose Day” in the UK featured a “sequel” short film to “Four Weddings and a Funeral” based around the marriage of Charles and Carrie’s daughter and her new bride, played by Lily James and Alicia Vikander.

SPOILER ALERT: SEASON 3 IS 🔥🔥🔥 Do you have a favorite part yet? 😜 pic.twitter.com/ElM3JyBYEd

I literally don't understand how Bobby does it, everyfuckingtime

Chris Hemsworth made a new friend while on vacation at Australia's Rottnest Island. As part of his contract with Tourism Australia, Chris and his family spent a week camping in Western Australia.

This morning, Kim, who has been an advocate for gun control, praised the government’s swift response to the tragedy.

A teen cracks an egg over Australian lawmaker Fraser Anning's head over anti-immigration remarks he made hours after the New Zealand mosque attacks. https://t.co/3aKgHn5ACk pic.twitter.com/dUDiemY3ul

A teen egged a far-right Australian lawmaker for his comments over the New Zealand attacks. The lawmaker then punched the teen in the face.

This is more an excuse to talk about the last episode since this promo shows nothing but man what a trip! :O

They're ah-ma-zing. Special props to Joel for dealing with his zombie wife and not freaking out (much).

Source: Me and yt

YouTubers Shane Burcaw and Hannah Aylward have started an online campaign called #100outof100 after Dr. Phil stated on his show "100 out of 100 relationships that involve caregiving fail."

Shane and Hannah, an interabled couple, have been together for 3 years. Shane has spinal muscular atrophy (SMA), a condition that causes cells in the spinal cord and brainstem to die, causing progressive muscle weakness. Since they live together, Hannah is Shane's sole caregiver.

Here's the full #TheFlash scoop from @Borys_Kit . Ezra Miller would like to see the movie take a darker tone, while the studio sees it as more of a fun, lighthearted play https://t.co/IjKVnviAgV

John Francis Daley and Jonathan Goldstein have been on board the project since January 2018.
They have a light-hearted approach to the material.
Miller is said to want a darker take on the material.

The two sides have been working on compromises but Miller took the initiative to tackle the story himself.
He has teamed up with Grant Morrison, the comics author, to pen a draft.
Miller sees himself as deeply committed to the character.

If Warners chooses against Miller's take on the hero, the actor could part ways with the project.
Miller’s holding deal on Flash expires May.

Former #DisneyChannel star #KyleMassey is being sued for allegedly attempting a lewd act with a minor https://t.co/N01KzrOihL

Kyle Massey, 27, best known for “That’s So Raven” and “Cory in the House”, has been sued for allegedly attempting to commit a lewd act with a minor, among other things.

He is being sued by a 13-year-old girl for intentional infliction of emotional distress; negligence per se : harmful matter sent with intent of seduction of a minor, attempting to commit a lewd act with a minor, and annoying or molesting a minor.

The lawsuit claims :
The anonymous girl claims that she and her mom met Massey in 2009, when she was just 4.
Massey maintained contact with her over the following years.
He contacted the girl’s mother to invite the girl to stay with him and his girlfriend in Los Angeles, so he could help her find an agent.
He started to send her sexually explicit texts, images and videos.

The girl is seeking damages of at least $1.5 million.

-People are confused why the teaser trailer is so cheap.

-Previously, James Wan confirmed Annabelle 3 stars Patrick Wilson and Vera Fermiga and is gonna be like a Conjuring movie. (But he's not directing it or the actual Conjuring 3)

‘Annabelle 3’ Feels More Like a ‘Conjuring’ Film Than the Other Spinoffs, Says James Wan https://t.co/GDXPgOrdyD

James Wan:
“I think by the very nature of Patrick and Vera being in it, I would say somewhat, yes, because in Annabelle 3 the doll comes back to the Warren’s home,” producer James Wan told us, when we asked him if the new Annabelle film would feel more like a new Conjuring film.

-Annabelle Comes Home is the sixth title in The Conjuring Universe. It picks up following the events in The Conjuring 2. It is speculated that Annabelle 3 introduces a new ghost and a new cursed monkey toy that already have movies in pre-production.

How do you rank the films in the Conjuring Universe?

-This year's lineup includes faves like The Killers and The Cure
-42% of the acts are female
-Many more acts are to be announced
-OP speculates that Brandon Flowers must be jizzing his pants to have The Cure there, AND be reunited with his king, Liam Gallagher (If so, expect a follow-up post.)

-One music fan snob tweeted, “The Killers headlined when I went to Leeds ‘08. And isn’t George Ezra more Latitide than Glastonbury? Also SNOW PATROL in 2019?”
-Someone else called the lineup "boring and predictable"

Fans are split over the Glastonbury 2019 line-up announcement https://t.co/bcQ2qhQlqO pic.twitter.com/Yu9YJW0gi6

This is probably the best set of festival headliners I've seen in awhile. How about you, ONTD?

After having mostly blonde hair for the past few years, Hayley has finally returned to her iconic red/orange locks.

She has previously stated in a an interview with Entertainment Weekly:

"The hair thing is so emotional for me. About a year ago, I called my colorist and was like, 'I’m going through so much emotionally. I need a reset. I need you to bleach my hair,'" she said. "This has been really important for me, as a 27- and 28-year-old, to show myself every morning when I get up that I’m not someone who is going to live in the past. When it’s time for Neon Hayley to come back to life, she will. But right now, this is me."

fuck you you fucking liars

John Ottman won an Academy Award for his editing work on the biopic Bohemian Rhapsody. This has been puzzling fans since the movie contains some horrible editing.

He wishes he could go back and recut a scene that has since gone viral:

Oh my God! Wow. I didn’t know about that, but I know why that’s out there. Whenever I see [the scene], I want to put a bag over my head. Because that’s not my aesthetic. If there’s ever an extended version of the film where I can put a couple scenes back, I will recut that scene!

“I have been working so hard to get here, especially for the transgender people, they need to work harder than other people,” Tao says. “I’m so glad I’m here. I’m the first transgender model in Project Runway", says MiMi Tao. “I want to change the industry. I want to inspire all the transgender young generation who have a dream. Keep knocking the door. If they don’t open, the door is going to break one day.”

About the season, PR veteran Nina Garcia comments: “The most surprising part about this season was the fact that we had so much access to the designers, whereas seasons past we really didn’t have much accesss to them. We didn’t get to hear their background stories, our time with them was very limited. This time around we had so much more time to get to know them to know their backgrounds to know their story, to really understand where they’re coming from and where their creative process starts.”