The new fanmade album of unreleased Rihanna songs/old leaks released under a random name has debuted at #67 on the Worldwide iTunes Albums Chart. pic.twitter.com/1mHecngU9U

A fan made album named "Angel" with unreleased Rihanna music has been uploaded to iTunes and Apple Music under the name Fenty Fantasia. The album is currently #67 on the iTunes worldwide chart. It is also available to stream on Apple Music.

Fenty Fantasia DID THAT! 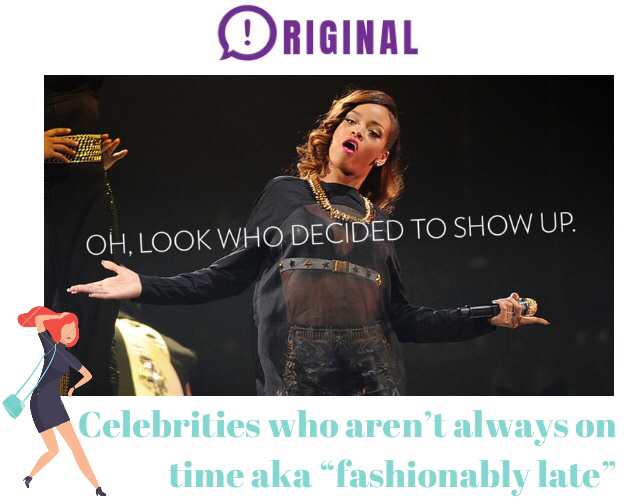 Celebrities are known for sometimes running late or being “fashionably late.” Since it isn’t your friends pulling these things, most of us don’t really pay a whole lot of attention to these “diva like” antics. That is until you’re buying tickets or attending events to see these celebrities and they pull that nonsense on your own time. Then it’s like, “oh hell no.” Here are some celebrities who are known for it or have slipped up a few times before.

Rihanna
We’ll start off with lategalriri since she’s featured on the main graphic already. The Bajan beauty has a pretty long list of instances she’s been late to several shows and concerts that Jezebel documented. Fifteen in total. She even angered journalists for her late antics during the 777 Tour which they described as “unbelievably long delays that wasted time by the bucketload.” No bueno Ri.

ONTD, are you punctual or are you always running late?

The series stars Michelle Williams and Sam Rockwell and chronicles the romantic and creative relationship between Bob Fosse and Gwen Verdon, two of the most influential choreographers and dancers of all time.

The series is produced by Lin Manuel Miranda and Tommy Kail (Hamilton). It premieres on FX April 9, 2019.

Kristen Cavallari of Laguna Beach fame was asked about the worst celebrity she ever interacted with. She answered without hesitation: Lindsay Lohan.

Back in the early/mid 2000s (a golden age of gossip), Lindsay *allegedly* broke into a house where Kristen and Talan (remember him?) were staying.

Do you know any crazy bitches? Fav gossip moment from the 2000s? Worst celebrity you've ever interacted with? 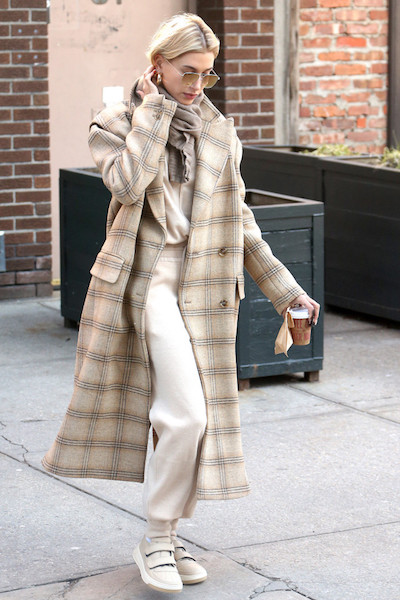 Fuck The Color Purple. Celebrities are apparently into... beige.

Florals beige, for spring? How groundbreaking.

ONTD are you streaming Butterfly?

Lady Gaga & Bradley Cooper's 'A Star Is Born' soundtrack back at No. 1 on Billboard 200 post-#Oscars https://t.co/dwid9b2YtE pic.twitter.com/kGooiUF6jP

Lady Gaga and Bradley Cooper spend their fourth non-consecutive week at #1 atop the Billboard 200 Album Charts. The soundtrack previously ruled the top of the charts after its release in October. The soundtrack moved 128K units the past week fueled by its win at the Oscars.

Ariana's album was vying for the top spot for the third straight week but came up short with 116K units.

The rest of the entries at Source

-The most 90s series of them all has gotten the HD treatment and can now be viewed on Amazon Prime!

-All 242 episodes were converted. While they havent seem to have gone back and restored the original music, they did create 350 original scores to best take the original songs place.

-In true Baywatch release fashion, there are some episodes that featured characters singing popular songs and instead of getting the rights to said songs they just cut the scenes completely or removed all the audio and put an original score on top of it.

-Piggy.co.uk was commissioned to create new art for Amazon Prime to use to entice watchers to rewatch the series.

• #SimonPegg 6 month body transformation for #InheritanceMovie
• The brief for this role was lean, VERY lean. It required a specific body shape & look pic.twitter.com/ihjL23HTPt

-Simon Pegg has gone from 78kg to 69kg for a movie role in "Inheritance"
-In the thriller Simon will play Morgan
-The movie will star also Lily Collins, Connie Nielson and Chace Crawford

Things look like they are getting serious for #KateBeckinsale and #PeteDavidson as they are spotted out together againhttps://t.co/l7BDBWCYAe pic.twitter.com/s9DHGqkNni

Kate Beckinsale, 45, and Pete Davidson, 25, were spotted together again this weekend. The pair met up last night after Saturday Night Live finished taping. On Sunday the two attended a hockey game at Madison Square Garden, where they saw the New York Rangers play against the Washington Capitals. No word yet on a double date with Liam Payne and Naomi Campbell.

With the popularity of a current music-themed film that has an Oscar winning song that may or might not have been a remake, it got me to thinking about musical moments in film that aren't musicals/music related. Did I say the word music yet? Inspired (but not really, this has been an old draft) by Entertainment Weekly's dance breakouts, here's a look back to 10 unexpected singing/dance moments from movies.

What other movies have performances that might've stuck out to you?

-Fiona moves on. Her ending is quite emotional.
-Emmy thinks the show does right by Fiona. (better late than never I guess)

Zendaya just showed her #TommyXZendaya collection and had the one and only Grace Jones return to the runway to close the show #PFW pic.twitter.com/lclom9jig9

Zendaya just showed her TommyXZendaya collection and had the one and only Grace Jones return to the runway to close the show. 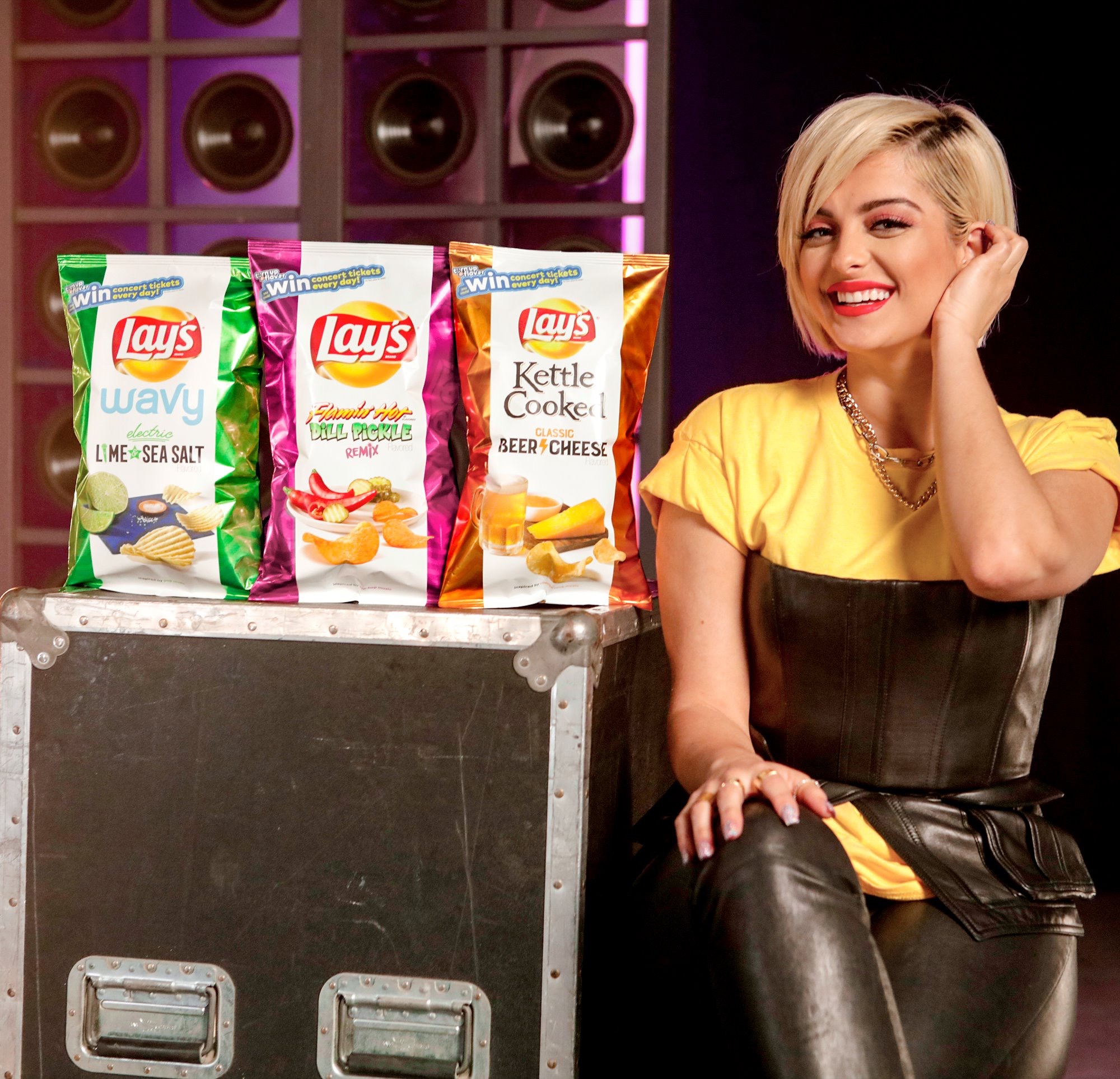 Grammy© Nominated Attendee Bebe Rexha teams up with Lay’s® Potato Chips for their new “Turn Up the Flavor” campaign. The Frito-Lay brand is releasing three new flavors inspired by three music genres – Pop (Electric Lime and Sea Salt), Hip Hop (Flamin’ Hot Dill Pickle) and Rock (Beer Cheese). Rexha wrote and co-produced a new original song, “Right Here, Right Now,” which was then remixed across the different genres. After purchasing one of the limited-edition flavors, fans can apply a code from the package online right here to download the corresponding track. The new flavors are in stores March 3rd. What a time to be alive for Rexhars.

Stormy Daniels will be performing a Wednesday night stand-up comedy show in Texas later this month.

For some reason, this is very distressing to a Conan O'Brien writer in Los Angeles.

Doing standup is not a reward for being famous. Please leave the weekend gigs for actual female comics. https://t.co/nR6YExAZ5d

Wow!So supportive. I AM an "actual female" but I'll never get women who just tear other women down& I know it's not a "reward". I've been writing comedy material for over 10yrs.Would you like me to critique your bj skills?Your whole foot fits in your mouth so you'll prob do great https://t.co/HQt2FCu3sE

The writer has not responded, instead choosing to mock Daniels's fans and post a list of "deserving" female comics.

ONTD, do you vow to uphold the sanctity of Joke Joint Comedy Showcase?

-Charmed 1x14 "Touched By A Demon" Season 1 Episode 14 Promo - FINDING YOUR CONFIDENCE — Macy (Madeleine Mantock) is trying to cope with new her new demon situation by watching a lot of her favorite TV shows, but things take a weird and dangerous turn. Mel (Melonie Diaz) and Jada (guest star Aleyse Shannon) enlist Niko’s (Ellen Tamaki) help to learn who might be after Jada. Maggie (Sarah Jeffery) and Parker (Nick Hargrove) decide it is time to take their relationship to the next level, which leads them to make an unusual discovery. Meanwhile, Mel’s powers seem to be expanding with the guidance of Jada leaving her to question The Elders intentions. Rupert Evans also stars. Stuart Gillard directed the episode written by Joey Falco (#114). Original airdate 3/10/2019.