Thomasin Harcourt McKenzie and Matt Smith have joined the cast of 'Last Night in Soho' https://t.co/m2kGyg9ocg

Do you feel old?

We're celebrating the 20th anniversary of @OfficialTLC's 'FanMail,' the group's Grammy-winning smash that gave us "No Scrubs," "Unpretty," and forever gave their fans something incredibly personal and special pic.twitter.com/MTAGCAMw3O

Short clip (it's captioned throughout) shows group members Tionne "T-Boz" Watkins, Lisa "Left Eye" Lopes and Rozonda "Chilli" Thomas in interviews and concert footage following the release of the album. Left Eye talks about the meaning of the album title and how fans supported them. The group discusses their 8 Grammy nominations, including Album of the Year, Record of the Year and Song of the Year.

At the 2000 Grammy Awards, FanMail went on to win Best R&B Album, and No Scrubs won for both Best R&B Performance by a Duo or Group with Vocals and Best R&B Song.

An album retrospective was just published on Billboard:
( Collapse )

Ja Rule had the greatest halftime performance ever 🔥🔥🔥 pic.twitter.com/c7kCR8JMx6

On Saturday’s Milwaukee Bucks game, Ja Rule was the guest performer for their 90's themed half-time show. Ja Rule proceeded to pump up the crowd asking, "Are we ready?!". The crowd was lackluster and generally unresponsive. Ja Rule responded with "I guess not." and began his performance.
( Collapse )

The memo line on the $3,500 check that Jussie Smollett wrote to Abel Osundairo reads, "5 week Nutrition/Workout program Don't Go." There are text messages detailing workouts and grocery lists. Abel and his brother Ola also told the grand jury that the payment was for training.

- Kelly Rowland stopped by The Real (looking stunning), and Jeannie brought up (@ 2:55) how she was caught texting Nelly using Microsoft Excel in the 2002 hit "Dilemma" music video

- She also shared she celebrated her birthday for 48 hours - on the first day going to Australia, and came back to the US when it was still the 11th

- Will put new music out soon

- Plays Gladys Knight in American Soul, a BET drama based on Soul Train

- Would be down to play Donna Summers one day

Are you proficient in Microsoft Excel spreadsheets ONTD?

Friends With Benefit partnered with the Stars of One Tree Hill to hold a charity fundraiser at the warehouse that was Club Tric in the show. The event was held for The Girl Project and St. Jude Children's Research Hospital. 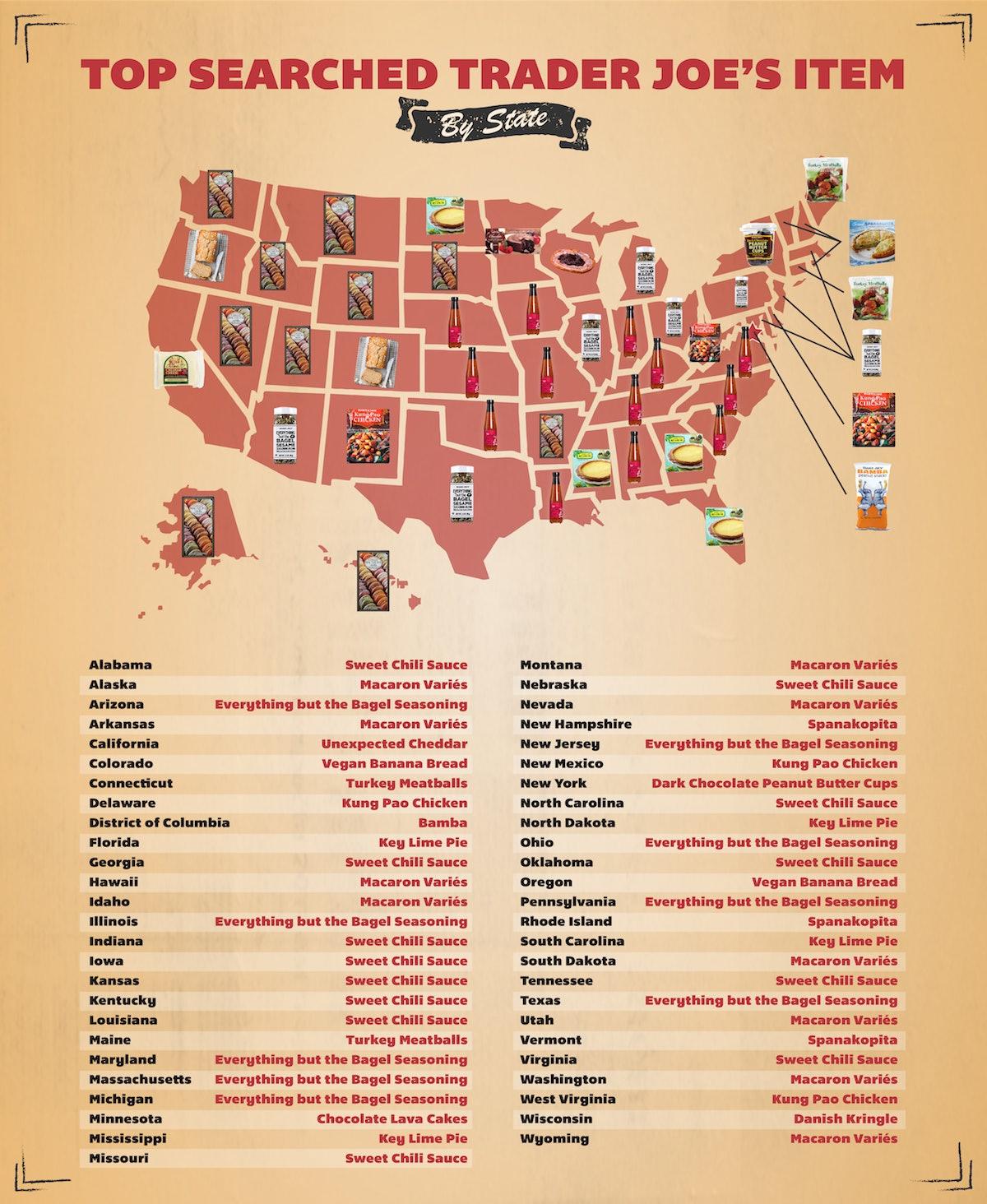 Have you ever asked yourself: what’s the most popular Trader Joe’s item in my state? 🤔 No? Me neither. But here it is anyways. The list was compiled by WorkWise who gathered data from Google searches done state-by-state to determine what products came out on top for each state and some regions.

After a year of avoiding the media and press, Taylor Swift has been spotted out in public more and more lately. After attending the BAFTAs a few weeks ago, she was photographed again last night with her boyfriend, Joe Alwyn, at a pre-Oscars party together in West Hollywood.

📷 | Taylor Swift and Joe Alwyn spotted at an #Oscars pre-party in LA pic.twitter.com/3cPv6Fo7cf

She was also photographed at the engagement party of several fans the other day. Her fan, Alexander Goldschmidt, invited her to play "King of my Heart" to friends and family. He posted, "I decided to propose to Ross listening to this song in my car. I can’t thank Taylor enough for wanting to help make this day so special #RossAndAlexForever." He has also been in her music video for "Shake It Off."

Finally, Taylor posted a mysterious photograph of palm trees and stars today. Its filter and colors sort of match other photos she has been posting lately, and it is captioned with seven palm tree emojis. Naturally, her fans are dissecting the entire thing online, suspecting that the seven palm trees hint at her 7th album. (However, it could just be a hint that she's attending the Oscars tonight in LA.)

ONTD, what do you think? What do you predict her next album be like?

- As a statue with a rainbow flag, that is. No news about it being true to size

- No word from Kevin, yet

ONTD, would you like to be turned into an award and in which category?

My dad still isn’t talking to me after he saw my last hurrah music video. 😑🤦🏼‍♀️

Bebe tweeted a few days ago about how her father didn't approve of her music video for "Last Hurrah". On her Instagram stories, she gave her followers an update on how things are going with her dad.

- Lee Pace played a role in Angels in America for a while last year, and he had a few nude scenes in which he showed his Ronan The Accuser.
- Somebody caugh a pic of his Pushing Daisie and has leaked online.

You can see the pics at the source.

This episode was filler but fabulous filler, unlike the type received by Kardashian ilk. Clint’s dumbass didn’t realize he could’ve have called Tracie’s lawyer to find out whether he could see her or not. His cousin says what we’re all thinking. Scott who can now bite and apple through a picket fence still has not told Lizzie his sorry ass is in debt. Meanwhile, Lizzie and her heavenly bosom drops nearly two grand on some clothes with no intention of paying Scott back or saying no to his help. This of course angers Jazmyne who is finally realizing that her mother is not going to try and get a job or be independent and she calls her mother a “greedy bitch”. Trailer Park Royalty Matt and Caitlin get ignant in the funeral home, but the funeral director’s braids was on point! Megan and her one way ticket meet up with Michael. He still doesn’t have it in his heartset to tell Megan about his “daughter mom”. THE WORD YOU’RE LOOKING FOR IS WIFE, IMBECILE! They rush to see his PO and end up getting there ten minutes late with Michael getting arrested. Mother Michael meets Megan but doesn’t reveal her son is a deadbeat. Ebony and Ivory still haven’t met. Here are some clips under the cut with that damned preview for "next" week.

ONTD, how are GPS skills in the car with your convicted felon bae? Also, OP might petition for a "trash tv" tag - reality show just doesn't capture its essence.

[Spoiler (click to open)]
* Movie fan Adam Sacks launched a Kickstarter campaign to digitally remove the rat that runs in front of the Massachusetts State House in final shot of Martin Scorsese’s 2006 Oscar Winner for Best Picture “The Departed.”

* Sack's alleges that the rat RUINED the end of the movie."That rat was a bad idea and we can fix it." (yeah ok bra)

* Sack's goal was met in less than 24 hours, but the rat was actually exterminated when somebody did it for free!

Here's the scene with the rat


And here's the scene without.

Read more of the story of the implications of fan culture at this Source.
Rat-infested video source
Rat-less video source
Happy Academy Awards Sunday! Which movie do you hate the creative decisions of and would digitally edit for your own entitled feelings?

This is very respectable. It's cute or whatever. Loving the hair more than anything.

The RED CARPET has opened at the Oscars. Tune in Sunday, February 24, 2019 on ABC for the show. 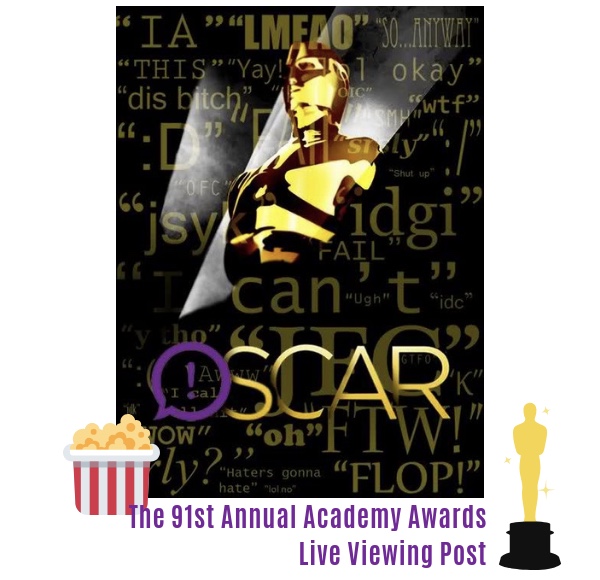 Original ONTD graphic credit thanks to this 2017 live viewing post. :)
Watch the biggest stars in Hollywood come together for The 91st Annual Academy Awards. The show will have no host this year and starts at 8 p.m. ET / 5 p.m. PT. You can watch the show online on ABC.Com and the ABC app. Check here for other official ways to stream the show online. Feel free to share alternative streaming links with others in the comments.

[List of Winners]Awards Presented and Won in this Order

Actress in a Leading Role
WINNER
OLIVIA COLMAN
The Favourite

It's been 30 years since Agent Cooper entered the town of Twin Peaks. #TwinPeaksDay pic.twitter.com/18yHKuKtq4

On February 24th at 11:30 am, Special Agent Dale Cooper entered the town of Twin Peaks to help solve the mystery around the murder of Laura Palmer. (He'd never seen so many trees in his life!) Today marks the 30th anniversary of that iconic event.

Jessica Jones makes an appearance at the #Oscars https://t.co/Sa18HSCDi2 pic.twitter.com/Z33r3V4WHD

Krysten arrived at the Oscars tonight with a surprise announcement - she's pregnant! Krysten and boyfriend Adam Granduciel have been together for four years.

#Meghan was very pleased with her henna tattoo, when one overly-concerned official asked if she wanted to wash it off immediately, she laughed: “It will dry as we walk round”. She told Samira “How lovely. Merci”. pic.twitter.com/iEkVE5EMCv