The video is really well put together: if you haven't seen all the films the music video references, it's a quick and direct way to catch up. Who knew that WaPo is as good at reporting on pop culture as they are at unearthing the latest malfeasance of the world's despotic regimes? Of course, whatever they do report on, we can't actually post here, as the newspaper is a banned source. But their social media posts aren't! So here goes:

And speaking of the intersection of journalism and pop culture, CNN senior media reporter Oliver Darcy was aghast that buzzfeednews.com had Ari's new video as a headline for a while when it first dropped:

BuzzFeed does a lot of great journalism -- so how is this the lead story on BuzzFeed NEWS dot com? pic.twitter.com/xQgfOyoxlD

Buzzfeednews reporter Ellie Hall clapped back with the greatest of ease:

CNN does a lot of great journalism — so how have these all been lead stories on CNN THE NEWS WEBSITE dot com?!?! pic.twitter.com/z7oI9Yg5fE

Another Buzzfeed reporter has a pretty reasonable explanation:

because it's newsworthy? Did you see just how many people watched the video drop live?? It's been one of the biggest pop culture events of the year!

Sources: WaPo video, Oliver's tweet, Ellie's tweet, Alp's tweet
When I'm on the move, I periodically glance at Buzzfeednews to make sure the world hasn't ended yet (I find Buzzfeednews' headlines less clickbaity than those on CNN and other sources. Really!). So that's how I learned the vid had dropped (it's important news to me, OK). So thank u, Buzzfeed!

Jessica Rothe is back in the lead role for this sequel to the 2017 film "Happy Death Day." Also starring Israel Broussard, Suraj Sharma, and Sarah Yarkin, the film is again directed by Christopher Landon. The film opens on February 14, 2019.
source

Curtis Jackson (aka 50 cent) commented on the photo:

Kenneth McGriff, 58, is a longtime rival of 50 Cent. He was reportedly accused of plotting to murder 50 Cent. McGriff is serving a life sentence for murder conspiracy and drug trafficking.
source
source 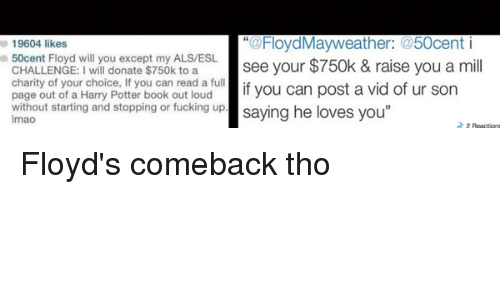 'VISION AND THE SCARLET WITCH' reportedly set to premiere in 2019:https://t.co/UUFkmA0qCx pic.twitter.com/pudftB3qG3

- Deadline is reporting an update on Scarlet Witch's limited series, starring Elizabeth Olsen.
- The show has been titled "Vision and The Scarlet Witch" but i've chosen to call it "The Scarlett Witch and Vision" because fuck it. Lizzie Olsen deserves it. So there.
- The series will also star Paul Bettany as Vision.
- It's unclear if the show will be set before or after Avengers: Infinity War/Avengers: Annhilation.

ONTD, which other Marvel show do you wanna see on the streaming service?

Cross Your Legs and Think of Good Books: The Bad Sex in Fiction Nominees Are Here! https://t.co/9KlnklJwmq

Each year since 1993, the Bad Sex in Fiction Award has honoured an author who has produced an outstandingly bad scene of sexual description in an otherwise good novel.

Here are some excerpts from this year's nominees:

“Empty my tanks,” I’d begged breathlessly, as once more she began drawing me deep inside her pleasure cave. Her vaginal ratchet moved in concertina-like waves, slowly chugging my organ as a boa constrictor swallows its prey. Soon I was locked in, balls deep, ready to be ground down by the enamelled pepper mill within her.
( Collapse )
The rest at the source

Part two of the Chilling Adventures of Sabrina will drop on April 5, 2019 on Netflix

GINA GERSHON GUEST STARS AS JUGHEAD’S MOTHER GLADYS JONES — On the road and running out of places to stay, Jughead and Archie head to Toledo to visit Jughead’s mother Gladys and sister Forsythia Jellybean.

Back in Riverdale, Betty inches closer to uncovering the truth about Gryphons & Gargoyles, while Veronica and Cheryl take on Hiram, Hermoine, and Penelope after more students fall victim to seizures.

Directed by John Kretchmer and written by James DeWille. Original airdate 12/12/2018. This will be the midseason finale.

Meek Mill previously defended Rick Ross when he received criticism in 2013 for lyrics referencing rape:
"Put Molly all in her champagne, she ain't even know it
I took her home and I enjoyed that, she ain't even know it.”
At the time Meek said: "I don't even care about nobody criticizing no lyrics. People rap about killing stuff all day. Biggie said, 'Rape your kid, throw her over the bridge' back then, it was nothing, it was just hip-hop. Now you got all these weirdos on these social sites voicing their opinion about something anybody say,"
( Collapse )
SOURCE
SOURCE
SOURCE

The Real panel discuss the recent controversy of social media influencer & Instagram model Emma Hallberg who has been accused of “blackfishing” in order to gain followers and endorsements. Some may ask, what does that exactly mean? A quick online search summarized it like this, “The general point of blackfishing is for a female of European descent to appear of African, Arab, or Hispanic ancestry.”

Hallberg responded to the online criticism saying, “I haven't done anything to make myself look darker. I get the tan naturally when I've been in the sun. I cannot change the way I was born because the things I've been accused of and the things people are mad about are things that are natural on me like my hair, my lips, my nose, my face. I've never claimed to be black or biracial or anything else than white,” said Hallberg to “Good Morning America.”

Andy Serkis "vehemently disagrees" with the backlash Scarlett Johansson faced for planning to play a trans person in "Rub and Tug": “Actors should be able to play anything" https://t.co/K330fC7oKQ

I bet you remember that time when Scarlett Johansson was attached to star in the ‘Rub and Tug’ movie, portraying a real-life transgender massage parlor owner Dante "Tex" Gill. I mean she had no problems playing Asian characters on film, so of course this was a no-brainer for ScarJo. She's that versatile! Once the backlash hit, the proud Yummy Pop owner issued a ridiculous statement, basically telling the people who criticized her for wanting to play the role that “they can be directed to Jeffrey Tambor, Jared Leto, and Felicity Huffman's reps for comment”. Once the popcorn machine pop-pop-pop sound faded, she finally came to her senses and dropped out of the project. That was in July this year.

5 months later somebody still thinks Scarlett shouldn't have had to drop out of the ‘Rub and Tug’ movie. That somebody is a renowned performance capture actor and now a director of such films as ‘Breathe’ and ‘Mowgli: Legend of the Jungle’. Speaking to Variety Serkis while on the topic of Hollywood’s ongoing conversation about actors and representation, namely Scarlett Johansson’s involvement in ‘Rub and Tug’, had this to say about the backlash ScarJo received that eventually forced her to drop out of the project: “I absolutely disagree. I really, vehemently disagree". Wait for it... "Actors should be able to play anything, and that’s why I love this [performance capture] technology. What should be the point is that whatever color your skin is, whatever shape you are, whatever height you are, whatever your makeup is as an actor, you should have the ability to play anything”.

On Monday’s episode of Teen Mom, Catelynn and Tyler reveal they are doing a month of living apart from one another and also announce on camera that Catelynn is pregnant.

Been keeping up with this season and lord... I wish for Tyler to just take his Mom and daughter and get away for his sanity.

The couple tied the knot during a Western wedding in Chopra’s home country of India on Saturday. The nuptials were held at the Umaid Bhawan Palace in Jodhpur, Rajasthan. Everybody wore Ralph Lauren.

“It was Nick who sent the first message,” @priyankachopra confirms. https://t.co/X9uK6wYQjV

He met her at Vanity Fair Oscar party and this happened: “And I put my drink down,” Jonas says, “get on one knee—this is in front of a bunch of people—and I say, ‘You’re real. Where have you been all my life?’ Like, loud.”

-Michael B Jordan's body caused a girl to break her retainer after seeing him shirtless... He found out about it and sent her a pm saying he'd pay for the retainer and she said for him not to worry about it, her insurance will cover it but she'd like a picture with him if he's ever in her town
-Graham shared more thirsty tweets about Michael including one where a woman said Mike set her uterus on fire
-Dawn named her breasts Ant and Dec because one is smaller than the other
-Michael said he only has 4 or 5 chest hairs and he gives them names too, Dawn said she has plenty of hair to donate lmao
-Dawn got food poisoning once and her mom thought she was sick because of RIMMING, Steve and Michael died laughing
-Steve once got knocked out during a hockey game and a guy asked him "What's my name Steve???" and Steve didn't actually know so he said "I don't know" and everyone panicked and thought he had a concussion
-Michael got knocked out for real during filming of Creed 1
-Michael said he wasn't funny enough to be on that couch

-Cheryl was slow and weird, but at least her plastic surgery settled and she looks like herself again, she seems to have hots for Michael

Whose body makes you weak in the knees, ONTD? PROVIDE PICS.

Should Rebecca be dating again? Will the Pitch Perfect guy do a good job as Greg? Am I the last person watching this show?

Ice-T doesn't understand why everyone cared he had never eaten a bagel, he's since eaten on (his opinion in the interview!). Mariska was scared to meet Ice-T originally because they told her he was "OG" and serious (and she didn't know what it meant). They're now bff and Ice-T will stay on SVU as long as Mariska stays.

dedicated to my svu fav

On Friday morning, the singer used an expletive to describe Joy Behar during an interview on 'Fox & Friends.' https://t.co/7bgJhHIMXo

-The joy of the holiday spirit has come early for Kid Rock as he has been fired from leading the annual Nashville Christmas parade after he called Joy Behar a bitch on live tv while being interviewed by Fox & Friends.

*This is your reminder to watch #SNL tonight with Claire Foy and musical guest @AndersonPaak* pic.twitter.com/y9M2hoyW2N

Emmy winning actress Claire Foy is... promoting one of her many movie bombs this year by hosting tonight's SNL, with musical guest Anderson Paak.

Rania Youssef could face up to five years in prison after being charged with public obscenity for wearing a see-through dress which revealed the entirety of her legs.

She is set to stand trial on 12 January after a group of lawyers filed a complaint to the chief prosecutor.

Kevin originally had this solo demo titled “Illusion”, that evolved into Gaga’s version, which you can hear a snippet of below pic.twitter.com/hc1FSMNlUh

Unsure of the date and location, but a Tame Impala fan account recorded a clip of the demo at a live DJ set. It's very similar to the final released song with different filtered KP vocal effects and the lyrics 'it wasn't love, it must've been an illusion'.

Could this be better than the Joanne'd version?

i think i prefer this style over Gaga's dramatic singing tbh

Hi! This time, instead of only doing the usual post-eurovision releases, I'll also comment about what we know so far about the 2019 edition.

Srbuk is a finalist of both The X Factor Armenia and The Voice Ukraine, finishing 2nd and 4th, respectively. Other than that, she has released two BOPs so far.

The song was not revealed yet.

And now, to the releases from November 16th to November 30th!