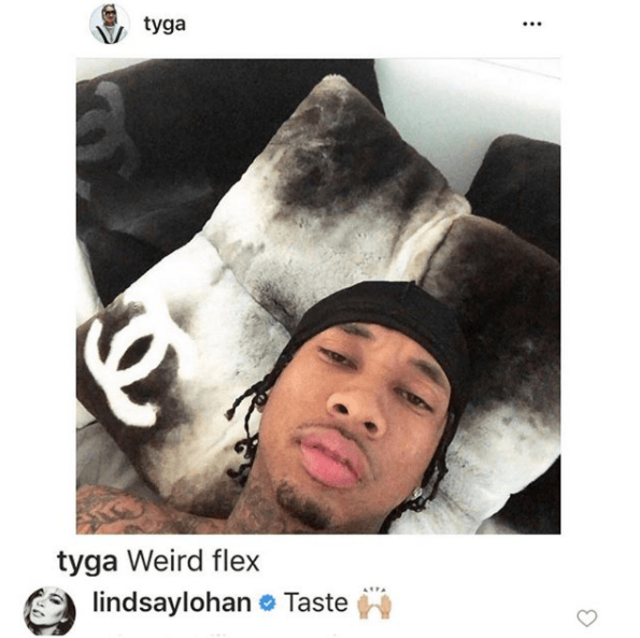 Tyga posted a selfie of himself in bed, lying on a Chanel pillow.

Lindsay simply wrote, “Taste.” One fan commented, “shoot your shot, sis” while another echoed, “lol same, girl” and “go get him, girl.”

The two are following each other on Instagram, but according to a Hollywood Life source, Tyga is not really interested in Lindsay:

“Tyga has a very specific type, and he’s just not interested in Lindsay in any romantic way.”

Well I’ll be damned, Rita Ora did it. After a long six year battle to release her second studio album under her previous record label, Roc Nation, and her current label, Atlantic Records; she’s managed to finally release her sophomore follow up to 2012’s “Ora.” And it isn’t half bad? Now, the album is hardly groundbreaking, nor will it top best albums of the year lists. The album however is a decent effort after the British songstress has recorded and scrapped at least 3-4 different versions of what would end up being “Phoenix.” And if you thought singles “Anywhere” and “Your Song” were catchy, the album cuts are as well.

Kim Kardashian made an appearance on Ellen a few days ago and addressed her and Kanye’s decision to hire private firefighters to save their home from the wildfires in California. Kim and Kanye West have also donated $400,000 to the California wildfire relief efforts and another $100,000 to a firefighter and his wife who lost their home to the wildfires.

The Golden Horse Awards (the Chinese-language film industry’s version of the Oscars) hosted in Taiwan got overshadowed by controversy.
Fu Yue, the director of Best Documentary winner “Our Youth in Taiwan,” used her acceptance speech to advocate for Taiwan’s independence.
The audience at the Golden Horse Awards reacted awkwardly to Fu’s speech.
Television and streaming coverage of the awards ceremony went black.
Fu’s speech was censored in China for her remarks.
The controversy was amplified by Tu Men, a former Best Actor winner at the Golden Horse Awards. He referred to Taiwan as “Taiwan, China”.
Gong Li reportedly declined to go on stage to announce the evening’s final winner.
Filmmakers skipped the post-ceremony dinner because of Fu.
Some of the celebrity parties planned for afterwards were cancelled.

They got Cardi B on the laxative nonsense “detox” tea. GOD I hope all these celebrities all shit their pants in public, the way the poor women who buy this nonsense upon their recommendation do. Not that they actually take this shit. They just flog it because they need MORE MONEY pic.twitter.com/OhmTjjWVOp

Jameela Jamil is done with celebrities flogging detox teas, which, according to her tweets, are just diarrhea water.

Generally just don’t ever take diet advice from women who know nothing about nutrition/basic advertising ethics. IF you want to get healthier, talk to a trainer/doctor. 🙏🏽

My thoughts on this @FlatTummyCo poisonous rhetoric (that is pink and always marketed at young girls) pic.twitter.com/zSvNpm1kaK

The famous make-up artist just launched her first makeup products.
The 3 shades are beautiful, cruelty free, and on my Christmas list. 💋

Based on the acclaimed podcast, Dirty John follows John Meehan [Bana] and his relationship with Debra Newell [Britton] and an unbelievable story of deception, love and survival. 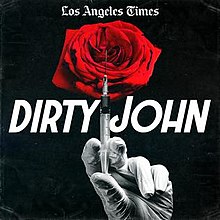 Did you listen to teh podcast? Are you going to watch the show!?

This year is the 10th anniversary of the Twilight movies. The books/movies had millions of fans worldwide, but two very famous haters: The film's stars, Robert Pattinson and Kristen Stewart.

They were cast in the movie when Kstew was 17 and RPatz was 22, and they thought they were making a campy, B-list vampire movie.

They have had some... interesting things to say about the book, movies, and fans.

Open to: All, detailed results viewable to: All. Participants: 492

Were you into Twilight when it was big?

The Morning Joe co-hosts made it official in front of the Constitution and the Bill of Rights. “It makes sense now more than ever, given what we stand for as a couple,” says Mika Brzezinski, “and what we’re worried about as a country” https://t.co/BEK6QlSpOk

Do you love apple bobbing and witchcraft, ONTD Gallifreyans? 🍏
(And are you allowed to just get on with your job without having to defend yourself?) Charles Harrelson killed multiple people, including a judge who was about to preside over a court case with a drug dealer. When Woody discovered the truth about his father, he spent millions of dollars trying to get him a retrial. Charles died in prison in 2007.

What's the single most unusual fact about your family, ONTD?

It’s Christmas Eve and Johnny Rose has an idea to throw a family Christmas party like they had done so before they lost all of their millions of dollars. Naturally, Alexis and David are reluctant to the idea. Will the holiday spirit win over everyone and save their holiday party thus bringing the Rose family closer? Find out next month on December 18th on CBC in Canada and December 19th on Pop in the United States. 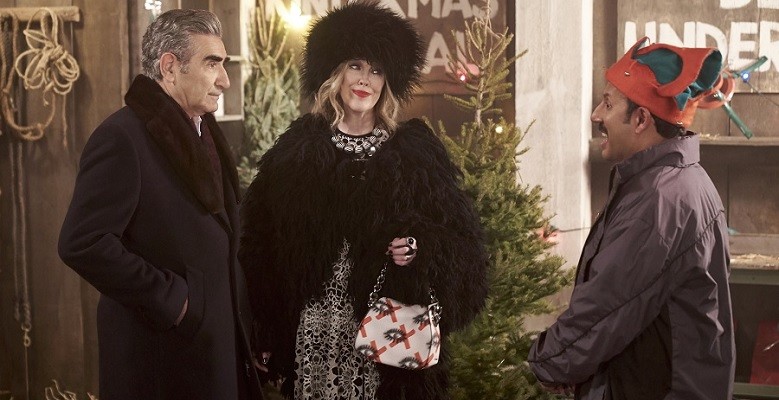 ONTD, are you feeling festive yet?

Charmed 1x08 "Bug A Boo" Season 1 Episode 8 Promo - A STICKY SITUATION — While on the hunt for Jada (guest star Aleyse Shannon), Mel (Melonie Diaz) scours The Book of Shadows as Harry (Rupert Evans) and Charity (guest star Virginia Williams) cross reference them to find any clues that might lead them to this new demon. As if that isn’t enough, they discover that there is a Changeling Demon on the loose that puts one of the sisters in danger. Elsewhere, Maggie (Sarah Jeffery) signs up for a job helping to market a new dating app which could land her a summer internship. Macy (Madeleine Mantock) decides to go outside her comfort zone after a little encouragement from Maggie. Meanwhile, Mel is given a task by The Elders that she was not expecting. Ser’Darius Blain and Nick Hargrove also star. Vanessa Parise directed the episode written by Zoe Marshall (#108). Original airdate 12/2/2018. S

Lena Dunham is the subject of a recent long profile where she talks about her life in the way only Lena can.

She was worried that people would get mad at her for naming the black puppy she was considering adopting "Rosa" because of Rosa Parks.

She insists that she's still close with her ex-boyfriend Jack Antonoff and said it's hard to convince Jack to come over because he hates her cats.

She says she's a very committed pet owner and she expresses regret that she couldn't drag the pet shelter employee who said Lamby was perfectly fine until he was adopted by Dunham for being fame-hungry because it wouldn't go over well.

She says race is a blind spot for her because she didn't grow up with much diversity.
( Collapse )
SOURCE

Maddie Ziegler (of Dance Moms fame) attempts to recreate iconic choreography moments (from videos such as Britney's Oops I Did it Again, Missy Elliot's Work it, and Michael Jackson's Bad & more!) in a video for Teen Vogue.

Fave iconic choreography from a music video? Does ur fave have any iconic dance moments?

Something is happening with today's villains. In this Wisecrack Edition, we argue that a shift is occurring in how villains are made. To understand what the shift means, we survey cinematic villains from the 1950s to today.

What type of movie villain do you like the most??
Collapse