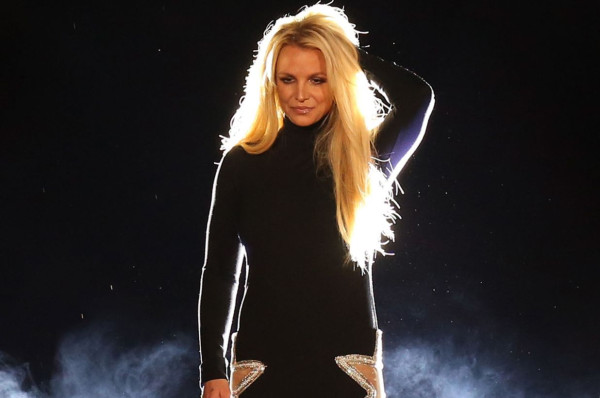 The NY Post reports that ticket sales are rough for the new Britney Spears residency, “Domination”.

In fact, Lady GaGa is outselling Britney 2-1 at The Park MGM. Britney’s first month of shows remains more than half unsold, sources told The Post. As for Lady GaGa, a 27-show stint for Lady Gaga that begins Dec. 28 at the same venue nearly sold out in the first week tickets were available. An Aerosmith residency that starts April 6 was 85 percent sold out in a week, according to sources.

Poor Britney ... Do you think “Domination” was a bad idea?

-New study reveals Kylie Cosmetics is 2018's brand that people engage with the most in social media.

-This is not measuring sales but how many people interact with their platforms.

To celebrate the official touring version of the hit Tony Award Winning Broadway Musical Dear Evan Hansen, a deluxe version of the cast recording has been released. One of the extra songs is a version of "Waving Through a Window" sung by pop star Katy Perry.

Katy took to her instagram on Thursday to announce she had recorded a version of the song and her own person experience with the musical and how it affected her:

I love her voice on this.

-WWHL has had its awkward moments before with certain guests but things got down right cringe worthy on Tuesday.

-WWHL guests included Debra Winger & Amanda Peet, neither of which seemed that interested to be there or wanted to play along with Cohens usual antics.

-Andy tried to pry some Game of Thrones spoilers from Amanda's facial features to which the actress just turned to Debra Winger the entire time and just praised her.

-Debra Winger played the shows staple 'Plead The Fifth' but she was not having it, especially when Cohen mistakenly thought she wrote about Shirley MacLaine in her book and Winger corrected him.
( Collapse )

-When asked to rank her best on screen kisser between John Travolta, Richard Gere, Robert Redford and Anthony Hopkins, Winger replied "Oh God, what were you doing 40 years ago? Ok, so you remember somebody you kissed 30 years ago?" to which Andy replied "If it was in an iconic film, I probably would." and Winger took it home "You don't think that you sort of are busy investigating a character, which puts you in another self state? Right now it's pretty hard to be authentically a person."

Have you ever had an awkward interview?

Luca Guadagnino is a "no bullsh*t" director and that's how he broke down this ЩIƬᄃΉY scene in #𝙎𝙪𝙨𝙥𝙞𝙧𝙞𝙖: no bs. pic.twitter.com/6U1LRkfmmP

Some stuff from the clip:

please use spoiler cuts if discussing the film :)

After her break up with ex Pete Davidson, Ariana has been actively working in the studio on a new album just a few months after the release of her last album Sweetener

The ponytailed singer also has been working overtime on her social media accounts tweeting at fans and teasing a new single that is said to be an "empowering" song on her new album.

Are you guys ready for a song about how hot Ariana is being disguised as a female empowerment anthem?

Prime Minister of Pop™ Carly Rae Jepsen had an Instagram Live session with fans to celebrate the release of “Party For One” (available now).

• A gay sends “popper party” in her chat messages and Carly reads it out loud and laughs.

• Jepsen discussed the three year recording process it took to get to this single.

• Says she has enough material for 4 albums and wishes she could release it all. Justice for E•MO•TION Side C — Z.

• Throughout her live chat friends stop by to visit and leave her gifts for one: a giant teddy bear, a companion pillow, “Party For One” embroidered Calvin Klein underwear (Jepsen makes it clear they are not paying her, but that they should), self pleasuring books, a loaf of bread, and albums by Celine Dion, Alanis Morissette & Gloria Gaynor. 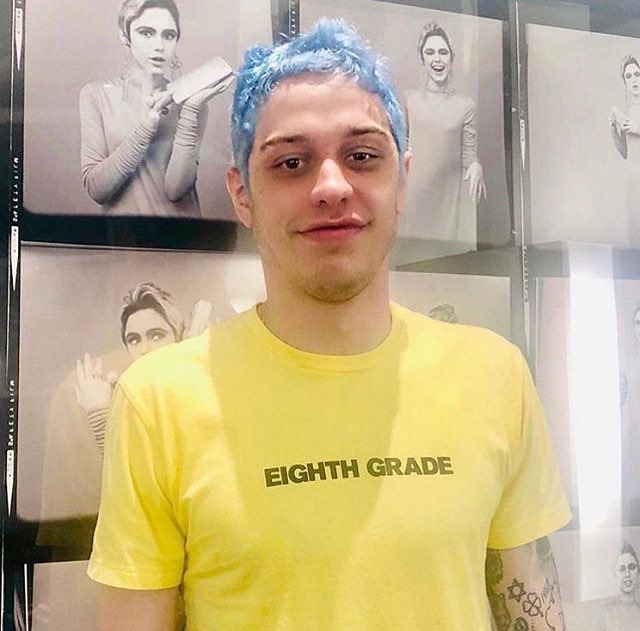 Pete Davidson's Not Blue Anymore Except for His Hair https://t.co/WLwwOJ2yZx

Butthole eyes went from blonde to blue, dying his hair once again. The color was first seen in his SNL promo clip with Maggie Rogers that did not sit well with Ariana Grande.

A colorist at Sally Hershberger Salon took credit for doing the dye job. “Had the pleasure of doing this funny guy's hair,” said Aura. Why she would want to acknowledge this I do not know.

- The first time Zoë was starstruck was when she was 11 at an awards show and sat by the Spice Girls. Scary Spice let Zoë sit on her lap.
- She first smoked pot at 14, and she smoked with her mom when she was 15.
- To embarrass Zoë, her mom would often sing from "The Sound of Music" in public. Zoë would also get embarrassed when her dad wore netted shirts.

Be kind to your community and recruit a #votingsquad 💪 Sign up at https://t.co/XgRj4MUNjO #WhenWeAllVote

It’s #thelastweekend before midterm elections... find out what you can do to help people vote on Tuesday! #vote #midterms @swingleft pic.twitter.com/lYiWCED5L6

have you voted yet ONTD? or plan on voting Tuesday?

'Isn't It Romantic' starring Rebel Wilson stole the plot and ideas from short film 'Love Handles'
The team behind the short film protested on twitter against the support for this new film.

-Julian McMahon who spent 2 1/2 seasons playing resident bad boy demon Cole Turner on the original Charmed has stated that he is open to appearing on the reboot should they ask him.

-While he hasnt seen the new show he is excited that they are revamping the show for a new audience and from he has heard it sounds interesting.

-He still gets recognized for his role on the show every day and Cole has been one of his favorite characters.

-Julian joins another star of the OG, Brian Kruse who is open to appearing on the show. None of the actual original Charmed Ones are interested.

Ariana Grande just surprise released her new single “thank you, next” 30 minutes before SNL began. It’s a break up anthem.

it's their second single from their upcoming album. leigh-anne(?) raps on it

some lyrics:
"Fan of myself, I'm stanning myself,
I love me so much I put my hands on myself"

Robin Wright on speaking to the camera in #HouseofCards: "We just decided, wouldn’t it be great if Claire was brutally honest and she shared her vulnerability and her insecurities — and her lies — with the audience?" https://t.co/1cTH1blSrO

- Wright talks about how Frank's trademark direct address becomes a tool for President Claire Underwood.
- "We just decided, wouldn’t it be great if Claire was brutally honest and she shared her vulnerability and her insecurities — and her lies — with the audience?"
- ICYMI: Kevin Spacey (Frank) was fired from the series over sexual assault allegations at the height of the #MeToo movement.
- The new season of House of Cards wastes no time tackling Frank's fate. [Spoiler (click to open)]He dead
- "The show has always been a meditation on and an exploration of complicity" said Frank Pugliese, writer and producer.
- Wright says: "I felt like I was not allowed to be looking into the camera at the end of season five. I was like, 'That’s not my place. I can’t do that.' Then, once you own it, you feel like you’re in the room with all of you. You really are complicit with me. And then it’s very freeing — the feeling of powerfulness."
- Final season is available now on Netflix.

"Am I flying, Jack?" pic.twitter.com/SAZsakXnHd

Hopefully this one gets put up before 1am, but tonight's episode of Saturday Night Live will be hosted by Jonah Hill (his fifth hosting gig) with musical guest Maggie Rogers. Enjoy, I guess.

(No, I don't think Leo will make another surprise appearance.)

So this famous online game called League Of Legends released popstar-inspired skins for 4 of their female characters (Ahri, Evellyn, Kai'Sa and Akali).
To complete the concept, they gave the girlgroup a name, K/DA, and dropped a song sung by Madison Beer, Jaira Burns and k-pop group (G)I-DLE's Soyeon and Miyeon + a music video featuring the characters.

Today the game had it's world championship finals at the Incheon Munhak Stadium, in South Korea, and the song was performed by the singers, plus holograms of the characters, during the opening ceremony.

Drake is not happy with the treatment he received at a Vancouver casino, and took to Instagram story to blast the city’s Parq Vancouver casino, alleging he was racially profiled.
Some of Champagne Papi’s followers came to his defence, lambasting the casino for its alleged treatment of the rapper by leaving terrible reviews on Yelp and TripAdvisor.

The casino responded to Drake’s allegations :
“Parq Vancouver is sorry to hear about this experience and takes these matters very seriously. We are required to adhere to strict regulations with respect to gaming in British Columbia. We are actively investigating this matter and have made several efforts to reach out to the customer and his team to discuss the issue. We are committed to having a productive conversation to resolve this issue.”