-He shares a deep appreciation for the Ocean like his character does which is something that drew him to the role.

-Enjoys that their version of Mermaids isn't like Ariel and co. since it makes sense that they'd be more predatory.

-Went to a marine mammal rescue center in Long Beach to help get ready for his role due to his character is into marine biology.

-Believes that Mermaids due to exist since there is still so much we don't know about our oceans.

-Is happy that the mermaids are non-binary and the diversity in the cast.

-Hopes they explore more of the siren song.

Just binged the first 4 episodes and love it. 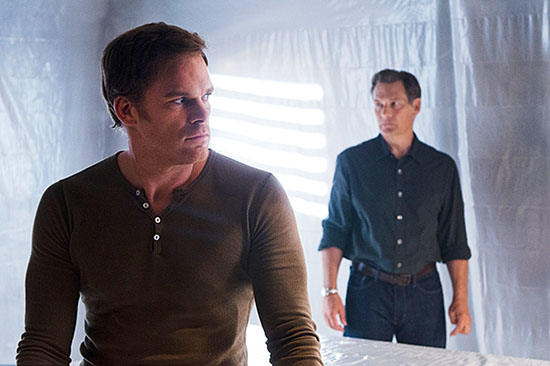 The series finale of Dexter left many, um, a little unsatisfied. It ranks up there with How I Met Your Mother as far as fan reaction to finales go (it was no Six Feet Under...isn't it something how Michael was a part of that also?) With so many reboots happening on tv, many are in talks or actors are being asked around in interviews, so it was Michael's turn talking to Variety.

"Maybe. It's a possibility given how the show ended that we could revisit Dexter. I have just yet to, for my part, imagine or hear someone else's idea that makes it feel worth doing. But never say never."

Hall is playing a Brit in his new Netflix mystery series, Safe and likes being in the U.K. “I just was enjoying my time there, I was in London when the U.S. election happened – I can’t say that has nothing to do with my desire not to return to the U.S.,” he said.

MOST of the 1/2mill ppl killed by #Assad in #Syria were not killed by chemical weapons. If ppl want to STOP the killing they have to destroy his planes & helicopters. Ystrdy will not stop the killing.


- the air strikes were targeted on suspected chemical weapons facilities in syria, occurring after the alleged chemical weapons attack on douma. the strikes were directed at military bases near damascus and homs
- opponents, like jeremy corbyn in the uk, have questioned the legality of the strike. may did not obtain parliamentary approval for it.
- trump tweeted that it was "perfectly executed" and "mission accomplished"

We are profoundly saddened with the news that the creator and original host of Coast to Coast AM, Art Bell, has passed away at the age of 72 at his home in Pahrump, Nevada. A full obituary will be posted soon on https://t.co/sARKKatlR3

for the newbies... Who Was Art Bell? -Post Malone’s Coachella set ran over 10 minutes past its allotted time.
-Viewers who tuned in for Beychella had to sit through 3 of his songs.
-At one point, he launched into a speech about all he had accomplished at only 22 years of age.

-It seems everyone on Twitter (and in the world lbr) had the same thought, because “He’s 22” trended for the rest of his performance.
-Wikipedia lists his birth date as July 4, 1975 1995. (🗣 WE DON’T BELIEVE YOU, YOU NEED MORE PEOPLE)
-As you can see, people were so fed up with him still being on stage that “ANOTHER SONG”, in caps, trended as well. If gifs could trend, this one would’ve been attached to it

ONTD, are you aging well? Will you allow yourself to age naturally or nah?

Sofi Tukker's debut album 'Treehouse' is a gorgeous, thumping mess of a record, thrown out without an ounce of pretence. https://t.co/UFqzg7nQdh @sofitukker pic.twitter.com/JyRQTEUDdb

-Received 4 stars by DIY
-Says the record revels in the absurd
-Lots of sass, versatility, slinkiness, fun, and some Portuguese singing too
-Now on Spotify!

-Sky Ferreira has been playing the song 'Guardian' live since 2014, but has never released it
-She recently took to Instagram to say she's in the process of mixing it
-She has blessed our ears with a 44-second clip

ONTD, have you ever put off doing something for 4+ years?

Anna Faris and ex-husband Chris Pratt were applying for their son's admission to competitive private pre-schools in L.A., but they got rejected from one. It had a weird admission ritual: The parents had to sit in a circle, hold a toy, and talk about the weather.

On The Ellen Degeners Show, Anna seemed a little... off?

Was your school weird, ONTD? 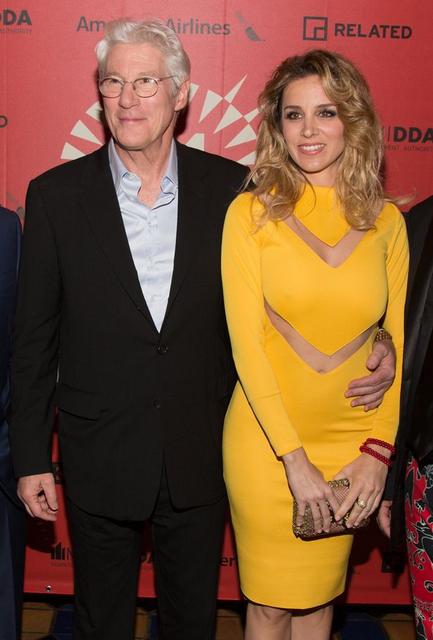 Alejandra Silva, 33 years his junior, has been dating the star of Pretty Woman and Chicago for three years. She is the daughter of a former vice president of Real Madrid.

She met Gere while she was divorcing her first husband Govind Friedland, the son of American mining magnate Robert Friedland.

Gere has been married twice before, to supermodel Cindy Crawford from 1991 until 1995 and model Carey Lowell from 2002 until 2016.

When a mission goes awry, Wyatt (Matt Lanter) and Rufus (Malcolm Barrett) are forced to bring a 17-year-old John F. Kennedy (guest star Grant Jordan) with them to the present. But while the Lifeboat is recharging for the return trip, Kennedy escapes from the bunker… into modern day San Francisco. Anxious to return the future president to history, the team must find a way to work together to rescue JFK and return him to the past before Rittenhouse assassinates him in 2018.

Disobedience, based on the Naomi Alderman novel about a rabbi's lesbian daughter, comes out in the US on April 27.

i'm ready for the gayngst

Eminem' show will not be streamed. oop

Frank Turner took to the streets of America to ask americans what they love the most about the country.

ONTD, do you think America can be great? do you agree with the people in the video?

Ready to watch the completely idiotic reason why Carl was killed off at the end of this episode, ontd?

Celebrities, they're just like us! Sometimes, they just want a day out and about without having to be hounded by the general public, fans, and chased by paparazzi when they don't call them on themselves. But such is the price to pay for fame. Today, we'll be rating five celebrities that snapped at the general public. Sometimes to fans, the paparazzi or even mouthy residents of a city to defend their big sister! I'm temporarily reviving MTV's Boiling Points here to measure just how red these celebs get - but we're not setting a time limit. We'll spin the concept into a BP thermometer and rate it. Shall we proceed?

Ian Somerhalder: “You guys, listen. No no, stop! Everybody listen! I love you guys, I'm not taking a single photo today. It's my day. Don't follow us. Please! I love you guys, you're so good to us. You're so awesome. Do not follow us okay? This is too much.”

Jessie J declared winner of Singer 2018 (sixth season of the Chinese I Am Singer) after receiving 47.49% of votes. She performed Dolly Parton's I Will Always Love You which was popularized by Whitney Houston.

She performed a version of Bang Bang with Coco Lee (winner of the fourth season of Chinese I Am Singer) and KZ Tandigan (contestant from Singer 2018).

- in an interview with ryan seacrest about his new song, "let me", zayn talks about his inspiration behind the song
- he says: "I was aspiring to be in love with someone for the rest of my life and the rest of theirs, as we all do" and "Things change and we move forward in life. And times change, but that’s what I was thinking when I wrote it... That’s the whole point of life." Tom HiddleSudan is making the rounds for Avengers: Infinity War and he talked about-- and possibly spoiled?-- Loki's role in the upcoming movie.

Lots of characters are rumoured to ( Collapse ) in this movie, with Loki being a popular guess.

Open to: All, detailed results viewable to: All. Participants: 288

Are you going to see Infinity War?

What are your predictions for Infinity War?

In case you care (I know you don't), there have been some rumors flying that Iggy "Eggy Eggs" Azalea and Chicken of the Sea are dating. Expired Tuna was seen with his arm around her during The Weeknd's Coachella set. Unclear if they snuck in or someone paid for them. There's even subtle Instagram posts of the two having matching sneakers (that's dope) that has now been deleted by Toga. Here's some evidence.

Tyga previously "dated" Kylie Jenner while Clueless Culture Vulture Copycat broke off a relationship with Nick Young after catching him cheating. Both couples have already lots in common as they struggle to make singles sell, maintain relevancy and have amounted some serious debt (him with just about everyone, and her with American Express).


ONTD, do two negative credit scores equal a positive one?

The Weeknd and ex-girlfriend Bella Hadid were spotted kissing at Coachella https://t.co/8u606afwrM

On Friday:
They were canoodling and being affectionate as she sat on his lap.
They were completely all over each other.

He was spotted with Chantel Jeffries the next day.

The Weeknd Shows Off PDA with Bieber's Ex, Chantel Jeffries, at Coachella https://t.co/5OCodiT2Kd

Bella unfollowed Chantel on Instagram.
They were rumous in 2016 that Morgan Osman implied on Snapchat that Abel cheated on Bella with Chantel.


are you ready for the return of enlightened Kanye, ONTD?

John Krasinki made his studio directorial debut with the recently released horror film, A Quiet Place. In the scene, the children are playing Monopoly and accidentally knock over a lantern.


SOURCE
Have you seen one of the best movies of the year yet, ONTD? Please use spoiler cuts when discussing the film!

Exclusive: John Cena and Nikki Bella have ended their relationship after 6 years https://t.co/5TN81tw5B7

-WWE wrestlers John Cena & Nikki Bella ended their relationship. They had been engaged for a little over a year.
-The issues in their relationship were televised on their reality show, Total Divas. Cena had been previously divorced and did not want to get married or have kids. Nikki wanted both.
-After 5 years together, he proposed at last year's Wrestlemania.

They released a joint statement today about their breakup:

“While this decision was a difficult one, we continue to have a great deal of love and respect for one another. We ask that you respect our privacy during this time in our lives.”

ONTD, would you sacrifice not having kids/marriage (or vice versa) for a partner?

She is boycotting the festival due to the political views of Philip Anschutz (owner of the parent company that hosts the festival) due to reports the controversial billionaire made financial contributions to conservative political groups with aggressive anti-LGBT agendas.

Delevingne left her Instagram followers somewhat confused.
Fans called her out for seemingly flip-flopping over Coachella, first protesting it and then apparently supporting it.