They've finally announced Kiernan Shipka in the role of Sabrina, but there's still other roles to fill.

bye whore. this is so awesome!

I deeply regret working with Woody Allen on Wonder Wheel. It's one of my most heartbreaking mistakes. We can no longer let these men represent us in entertainment, politics, or any other realm. They are beneath real men.

thanks for telling me how i feel. I DO regret it. He WAS a great filmmaker and while he WAS, he was also being a lecherous freak. I took the job because it was a fream come true to work with the artists, but i knew what he was accused of and that should have stopped me.

I loved Woody Allen’s films. In 2006 I was offered the lead in Midnight in Paris. When it fell apart, I became desperate to work with him. As time passed, the accusations reared their ugly heads again & as more deets came out, I felt conflicted & yet, I chased. Thus the regret.

During FX's Television Critics Association Press Tour, Ryan Murphy revealed that the next installment of American Horror Story will be set in the future, though it won't be in space.

After two and a half years with my beautiful lady, she’s officially my feyoncé. ❤️❤️❤️ pic.twitter.com/5L8mk8qQjD

Actress and comedian Fortune Feimster has announced she's engaged to her girlfriend, Jacquelyn Smith, a teacher.

Dylan O'Brien took to Twitter to express his disgust for Logan Paul's actions in Japan. Many of O'Briens fans are praising the star for his disapproval over Paul's actions.

Although O'Brien tweeted his distain for Paul, he is no stranger to this type of behavior. In 2015, O'Brien bragged on Live! With Kelly and Michael about how he and other cast members disrespected Native American artifacts while filming Maze Runner: Scorch Trials in New Mexico. He blamed it on several unexplained events and sicknesses during the filming.

20th Century Fox claimed that even though O'Brien publicly admitted to, he and the others did not desecrate any artificats. Despite a highly publicized online petition, O'Brien has yet to publicly apologize for his actions.

Meanwhile, friend and Teen Wolf co-star, Tyler Posey posted a video on Instagram saying he and his celebrity friends should be called out and held accountable for their actions.

.@LadyGaga pushed the envelope, was fueled by every headline, and never settled for ordinary.

No matter the odds, she found a way to rise above, and because of it music has been changed forever.

In case you didn't hear, Gagalita is performing at the 2018 Grammys on January 28. The Recording Academy took to Twitter to remind us of that and officially cement her name in music history. "She found a way to rise above," their tweet reads, "and because of it music has been changed forever."

Where is the lie? Remember when all your favs were looking CHEAP and WRECKED in those colored wigs, trying desperately to keep up?

ONTD: What is your fav Gaga vid/non-single?

Last night, The Killers kicked off their Wonderful Wonderful tour in Toronto. As they were about to start playing For Reasons Unknown, Brandon Flowers spotted a fan on the floor holding up a sign asking if he could play drums for this song. He invited him up, and "Brandon from Toronto" did an amazing job!!!

stewie_e for your inspirational posts and making me want to see them live!

ONTD, who would you want to get up onstage with?

Flight of the Conchords is allegedly returning for a new hour-long special later this year https://t.co/VXK6hBT3ic pic.twitter.com/tbWLm1kNNu

-Although nothing has been officially confirmed, Jemaine Clement told a reporter that they are filming something.
-HBO has not confirmed but says they'll hopefully have news soon.

2018 is blessing us in so many ways. Favourite Flight of the Conchords song?

Morena won, her ex-husband's agreed to move to New York rather than fight to keep their child in L.A.
She can stay in New York with their son and Austin will move there. They will share custody.
She agreed to pay 1 more year of support to Austin at a rate of $5,000 a month.  She'll also pay him $3,500 a month in child support.

More @nathanwchen: He was thrilled to work with @VeraWangGang and on new costumes for #USChamps18 & #PyeongChang2018: "Costumes were the missing link all season .... I'm so grateful for the opportunity to work with her." @EvanLysacek was involved as well.


Nathan joins Nancy Kerrigan, Michelle Kwan, and original OrangeBro/Queen of Snakes Evan Lysacek as the anointed ones to be outfitted by Vera Wang.

What are your favorite (and least favorite) figure skating costumes?

I haven't gone through his personal journals and I knew that... shocked the people that work with this man #ambition is kind https://t.co/HHVQwnxiXF

No autocorrect .....Ambition is blind

A whole group of black women accused Bill Cosby of horrendous crimes..there was no hashtags no movement

The gritty reboot, with a script for which has been likened to Christopher Nolan's The Dark Knight, stars Taron Egerton as Robin Hood, Jamie Foxx as Little John, Eve Hewson as Maid Marian, Ben Mendelsohn as Sheriff of Notingham, and Jamie Dornan as Robin's brother, Will Scarlet.

Last year, Foxx described the film in a way that only raised more questions: "The way they shot it was crazy, it looks like you're watching Zero Dark Thirty. We're shooting with our bows, but they computer-generated it so it's rapid-fire, almost like an AK. I saw that and was like 'Oh, they ain't ready for this.'"

Robin Hood is slated for greatness a September 21, 2018 release.

Do you like Ben Mendelsohn's eyeliner and fancy coat?

Mementos from Justin Bieber’s formative years as an aspiring singer will go on display next month at a museum in his Canadian hometown https://t.co/YVF2aqwZrx pic.twitter.com/7iF4FuMKTE

On February 18, the Stratford Perth Museum will launch their “Steps to Stardom” exhibit, featuring items from Bustin Jieber's explosively successful career. The museum is in Stratford, Ontario, Biebs' hometown.

The exhibit will display Biebs' microphones, his Grammy award, some of his sweaty hockey gear, and some personal letters including one he received from best First Lady Michelle Obama.

Okay but.....they should just restart it from scratch..with people the same age as the Avengers imo. Also the female characters need to be much more prominent or this will fail. No more Xavier/Magneto/Wolvie manpain. Also no tie-ins like below.

This post is a follow-up to my post about getting cheated on. 3 years later, we will be discussing our favourite songs that are a little bit more...morally ambiguous. From telling off a potential "homewrecker", to being the "homewrecker" trying to tempt someone from a relationship, the 90s had no shortage of songs that will make you feel brave, no matter what you are attempting to accomplish.


You can pout your cherry lips / Try to tempt with a sweet kiss / You can flutt your pretty eyes / He ain't got his hands tied.
No chains to unlock / So free to do what he wants / He's into what he's got / He loves me, he loves you not

ONTD, what are your favourite questionable songs?

“Thank you for courageously telling your stories and signaling this moment. Time’s up. “Please join us on blacking out Sunday. Post your videos and pictures of yourself in all black whether you watch or don’t watch, go or don’t do. Sign our solidarity letter and donate to the fund.”

“Yaaas @rosariodawson! This is why we wear black! Everyone can join in tomorrow and post a pic of yourself in Black standing in solidarity with women everywhere trying to fight the imbalance of power! #TIMESUP on abuses of power! Today is a new day!” Longoria, 42, wrote alongside a copy of Dawson’s video.

Kyle and Taylor were seen eating lunch together today in Texas and earlier this week they showed their support for Taylor and his annual NYE charity event to raise money for the African Children's Choir. Derek Phillips, Taylor's on screen brother, Billy Riggins, was there as well.

While Connie Britton is in the new FOX series, 911, Kyle is taking a break from filming 'First Man' with Ryan Gosling in Atlanta. Meanwhile, Taylor Kitsch can be seen as David Koresh in the six part mini-series 'Waco', which premieres later this month.

There's no need to be scared of @courtneyact! 😂 #CBB pic.twitter.com/MyITTv3Q4o

-The women are asked if they would like men in the house with half of them split between retaining the dynamic they have and the other half wanting to bring in change.

-The women are asked to assign jobs to the incoming males which pisses off Ann as she thinks both sexes should be treated as equals. India is not happy as has a fear of Drag Queens.

-India is not happy about having to give up her single bed and complains to BB who informs her that the bed was intended for Ann from the beginning which leads to India to lag on Ann.

-The men are all good sports about the jobs they are assigned.

-Courtney reveals that majority of her relationships have been with straight/bi/pan-sexual men.

-India asks Genuwine and Andrew if they would date a Trans-Woman. Genuwine reveals that he would not. Andrew seemed to get off the hook of answering due to all the voices in the mix. Kim Ks friend Malika says "its a preference" and goes on to call India a glorified victim "if he doesnt want you, he doesnt want you" after India storms off. Malika would not be mad if someone did not want to date her due to her color.

-Shane makes his grand entrance after his shower.

In this "Screen Tests" interview, Nicole Kidman talks about how much her violent scenes in Big Little Lies disturb her husband Keith Urban. Her first Halloween memory was of dressing up as a ghost. Her favorite toy growing up was a Barbie doll, so her mother and grandmother would make her Barbie clothes. The most legendary New Year's Eve party was in 1999, during the filming of 'Moulin Rouge,' when Baz Luhrmann invited "all of Sydney" and Kidman shimmied with a snake. Nicole reminisces about the black velvet Valentino mini-dress she wore on the red carpet of the Academy Awards with Tom Cruise.

Charli XCX on the cover of NYLON China January 2018 ✨💙🌺💚 pic.twitter.com/7etaMGvp8h

Are you still bopping to Pop2, ONTD?

The Florida Project star, 7, and Wonder Woman actress, 32, have become fast friends while doing the rounds for awards season this year. They are photographed here at the AFI Luncheon and the W Party. Brooklynn previously said it was her 'dream' to meet Gal.

Based on these photos I think Gal Gadot adopted Brooklynn Prince pic.twitter.com/YP16NEe9pi 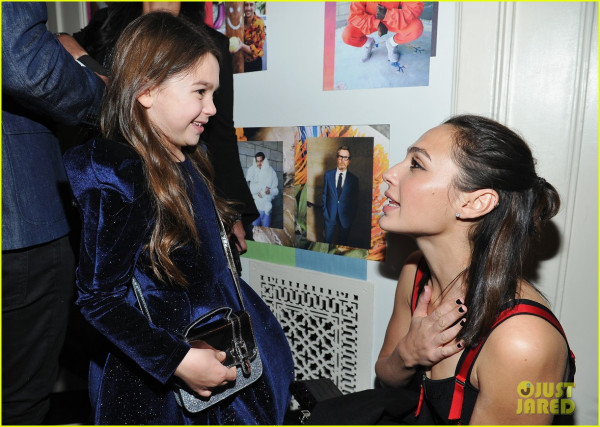 "Together or Not At All" - Just as the team reunites, they become prey to an undefeated Kree warrior who is bent on killing them all, on “Marvel’s Agents of S.H.I.E.L.D.