Their new EP, 'Ten Years' is available on November 17th.

this is a BOP

-Taika describes how he got the job directing Thor: Ragnarok.
-Elaborates on why he wanted to film this kind of movie since it differs so greatly from his previous work.
-Explains the ways in which his past movies are creatively similar to Thor.
-Discusses accents and humour.
-Reacts to the positive critical reception the film has received so far.
-Says he plans to go back to making some smaller films and that he has some screenplays that he's been holding on to.

“The reason I’m so angry is I’m so shocked that we’d got to this point and we’d all accepted it. We all knew about it! We. All. Knew. (...) I knew that pretty much every single woman I know had suffered sexual harassment in her life. I knew that, and I’d just accepted that. I’m hardwired to accept it. I’m a feminist, and when I talk about it, it shocks me. But I had literally accepted it, like I accept that we have a class system. I’d accepted it like I accept that there are homeless people. And that’s just bizarre – but it’s what we’ve done. And then suddenly someone speaks out, and you start to think, why are we as a society accepting of this situation?”

The Royal Court’s Vicky Featherstone: ‘We all knew about sexual harassment. We. All. Knew’ https://t.co/M89KFYyQBy

I'm glad some positive things are happening. ONTD, have you ever been harassed at work?

Everyone wants to work with director @TaikaWaititi https://t.co/dHpR7cUsn3

Taika Waititi, a beautiful person with style, was featured in GQ as he continues to promote Thor: Ragnarok. Highlights include:

"I love dressing up, and I think part of it is just obviously wanting some attention, but it also makes me feel very good. It makes me feel happy wearing something that's, like, just got a bit more personality, I think."

Growing up, my biggest dream was to be photographed for GQ. Hahahahahhaaaa NOT. I stole someone else's dream Lolz! #GQ #ThorRagnarok pic.twitter.com/GSBGnkQE6T

- Jimmy knows why Britney and Justin broke up, but doesn't say why
- Says it's "top secret" when asked whether Janet Jackson will perform with Justin at the Super Bowl halftime show
- Talks about how talented and generous Miley Cyrus is
- Jimmy hasn't blacklisted anyone from his show, and says anyone is welcome
- Talks a lot about his time on 'SNL' and how much he loves the show

If you paint every man w the same brush, you’re gonna run out of paint or men.@AsiaArgento

So many self-seeking liars to block, so little time....@Bourdain

Self-confessed sexist and friend to serial sexual predator, Alec Baldwin vowed to take a twitter break yesterday, though that didn't stop him from attacking actress/director Asia Argento and her boyfriend Anthony Bourdain who have both been critical of some of his victim blaming contacts.

He is now tweeting pro-Rose McGowan and anti-James Toback, anti-Alec Baldwin tweets which leads me to believe he was hacked.

This legend. @KVSwitzer you’re an inspiration to all of us ladies on marathon day. #261fearless #tcsnycmarathon pic.twitter.com/9YnCwLLSzR

Ignore the other one mods, I submitted to soon - sorry! Anyone else cry watching Shalane Flanagan cross the finish line?

Oswalt's first wife, Michelle McNamara, passed in her sleep on April 21, 2016. Oswalt announced his engagement to Salenger in July 2017.

😍 at Tiler, 😭 at Robbie, and chat about other companies, and about ballet gossip (there's a lot lol) in the post!!

Joe Jonas and Sophie Turner celebrated their engagement last night at a dinner in NYC with family and friends.

The former Disney starlet and iconic pop star has had a long herstory of political activity: she campaigned against Brexit, defended Tr*mp, supported Turkish Dictator Erdogan, and recently defended Harvey Weinstein. Today she was inspired to negotiate directly with the orange oppressor himself since they are both somewhere in Asia (Tr*mp is in Japan, Lindsay in Bangkok).

@POTUS I'm in Asia ... let's meet before you head to Moscow #russia #putin

do you have friends on the same continent as you ONTD?


Sources: 1 2 3 4
How many guys did you see dressed up as Eleven for Halloween? I saw... a lot. Also, Joe Keery is very charismatic.

Obligatory "lol who watches this show still?", "I hope ratings go down so this show can finally get cancelled", "this show is boring", etc.

Curious about the show and why it has so many posts on ONTD but don't know where to start? Check out the Halloween guide to watching The Exorcist. (You can watch the second season on Hulu, Fox's Website, Amazon Video, and Yahoo View)

Thoughts on next week?

Which is your fave ONTD?

Budget Zefron, Dacre Montgomery, was so committed to playing the role of Billy on the second season of Netflix's Stranger Things, that he sent in a wild audition tape.

"I just kind of wanted to make a bit of a splash with the Duffers, because I assumed they would be getting so many tapes," the Red Ranger spills to @GQ.

"So I got up, kinda went crazy, shaved all my hair off around my face except for my mustache," he continues. "And then rang two friends who are still studying at the acting university that I went to here in Perth. Then during the day I made everything else happen—the dancing and the rest, going out in the G-string and just playing around with it, and putting it together on iMovie and doing all that sort of stuff. And then my two friends came around in the evening, and they had no idea."

This is in my top five favorite things I've ever seen. @FinnSkata pic.twitter.com/anoaL8dGPn

Speaking of Dacre Zefron, Stranger Things star Finn Wolfhard appeared on Jimmy Fallon and let it slip that the only reason he plays basketball is because of the IRL Disney Prince's portrayal of Troy Bolton in HSM.

Did he just steal another gig out from under Zachary? #ZefronRanger

- the American claimed his first Masters 1000 title by defeating Serbian Filip Krajinovic 5-7, 6-4, 6-1
- secured the last spot in the ATP finals (with Pablo Carreno Busta being the alternate in case a certain someone withdraws)
- will make his Top 10 debut on Monday
- has won a M1000 title before Delpo (he's got the Slam tho), Thiem, Raonic, Nishikori & Goffin

source
What a crazy tournament lmao.


Frank re-lives his 20s and joins the workforce for the first time! Meanwhile, Fiona grapples with evicting someone from her building; Lip works out a plan to sabotage Charlie's chances with Sierra; Ian and Carl make a troubling discovery about Monica; and Kev says his goodbyes as he prepares to go under the knife. (Air date: Nov. 12, 2017)

selena has had a busy week - breaking up with the weeknd, getting back together with justin bieber, running away from a gang member and riding bikes around los angeles. just recently, she was spotted in a park reading to kids.

she also spent time with her cult church, speaking on stage at the Hillsong Conference. she read an emotional letter she wrote to her younger self

Imagine being 14 and heartless that you can't even stop for your fans who made you famous in the first place! WOW. @FinnSkata #FinnWolfhard pic.twitter.com/gGLVyQYdIZ

this is what he looks like when finn said no. pic.twitter.com/yTB3NMZi6E

-Updated (He put his twitter on private for a bit, and now is bashing on Finn like wtf dude?) I hope Finn is well, and isn't bothered by this.
-As Finn was walking out of his car, a fan who is a 21 supposedly but lets be real he looks 30 plus year old man who got upset with Finn who politely said "Hi" as he couldn't take a pic
-Fan got super pissed that Finn declined his picture with him, posted the video on twitter and immediately got backlash for it
-Finn's brother has been liking some tweets that state that FInn is a 14 year old child who doesn't owe anyone a fan request every time and etc.
-Zelda Williams was one of the tweets that his brother liked on Twitter

At any age, celebrities do not owe you their existence or privacy. You’re entitled to the performance you paid for as a consumer, not them. https://t.co/fssfallESR

-His costar Noah Schnapp defends him, like can't believe that kids can't be their age smh :(

So true. we really love the fans. Finn is the nicest guy u will ever know. we all work so hard, and need a break sometimes. #Compassion ❤️❤️ https://t.co/On3Fo8NeB8 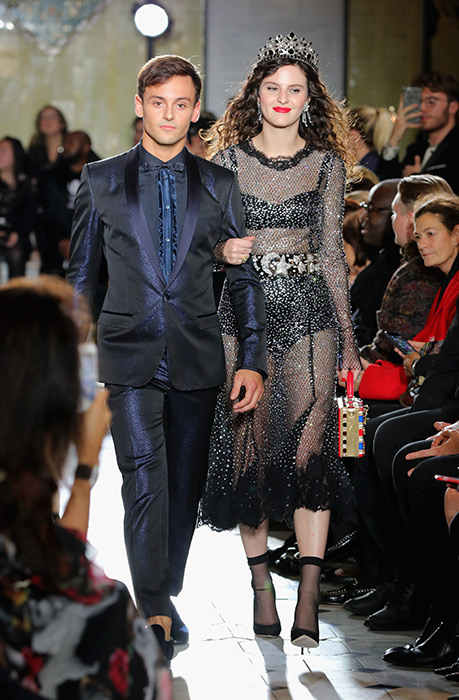 Hello yes, it is the best time of the week again. Good Behavior time! Let us discuss the most recent episode of the best TV show about a con-artist/thief and her hitman boyfriend!

If you are not watching this show yet, please engage in some self-care and start watching ASAP!

Claire and Jamie leave Scotland, sailing to the West Indies on an urgent quest. When the superstitious crew looks for someone to blame after a string of bad luck, rescue comes from an unlikely source.

Outlander airs on Starz at 8pm, Sundays (and is made available OnDemand at midnight on the day of airing)

I've been spoiler free and not read the books so I did NOT realise they was in this episode. Hf Jenny reading Claire the riot act. Also glad for Jenny and her water pitcher. I'm so over the hate sex that always flirts with the line of consent...and not in a good way. I did like this one better than ep7...but it still felt really plot device-y to move the story forwards instead of a natural progression!

He wrote the Sharon Tate role with Margot Robbie in mind

Three of the other lead roles were written for Brad Pitt, Leonardo DiCaprio and Samuel L. Jackson.

Who would you like to see in a Tarantino movie, ONTD?

favorite song from the 90s??
Collapse