In the latest episode of W&G Jack meets his grandson, and finds out he's a gay kid being sent to a pray-the-gay-away camp.

I see you going for that Will/Jack ship, NBC...

Selena Gomez collaborated with electronic dance music producer and DJ marshmello. Their song WOLVES whispers to an ASMR forum near you (Wednesday, October 25).

Cute little Christmas bop, it's a song to go along with her second children's book "river rose and the magical Christmas"

Well hot damn! Keeping this a secret the past few months has been sooo haaard! SURPRISE Y'ALL! #DreamJob #PinchMe #Actor #Producer #Director https://t.co/40ygLHjOLM

- She'll star in a comedy or drama for the studio this pilot season
- Will also develop additional projects as an executive producer
- She believes that now, more than ever, female voices need to be heard

yas queen! so happy for her after the mess that went down on chicago P.D.


This morning Rita released the official music video to her only good song besides 'I Will Never Let You Down'.

American football team the Seattle Seahawks are trying to start a "movement" to bring back short shorts during Thursday workouts. Currently only 10 players are doing it, including Ciara's husband Russell Wilson, but they want to have the whole team get on board.

It started with rookie offensive lineman Jordan Roos. He lifts in shorter shorts because he finds it more comfortable. Being a rookie he didn't immediately start wearing them during practice with the Seahawks, but worked up the courage to do so eventually. Others joined in.

Thursday practices are also "Techno Thursday" because teammate Luke Willson is a fan. "So it’s kind of like the Techno Thursday ensemble for us is now short shorts,” according to Willson.

Happy Friday ONTD! Work in a leg day this weekend!

- Fox is airing an hour-long documentary in honor of the greatest episode of television ever, "Homer at the Bat." Homer was previously inducted in the Baseball Hall of Fame back in May.

thank you, LA Dodgers, for ending our long national nightmare

This video is from his high school days at LaGuardia in New York. He's rapping about statistics. Probably for extra credit

source
how far have you gone for extra credit?

Today on The View the panel interviews Democratic Congresswoman Nancy Pelosi about the lack of response in helping the citizens of Puerto Rico from the current embarrassment occupying the oval office, General Kelly's statement defending Trump's behavior and more.

Sheila E. performs two songs off her new album including 'Funky National Anthem' (where Sheila takes a knee during the saxophone solo in the middle) and talks about Prince's death and her message for America on her new album. 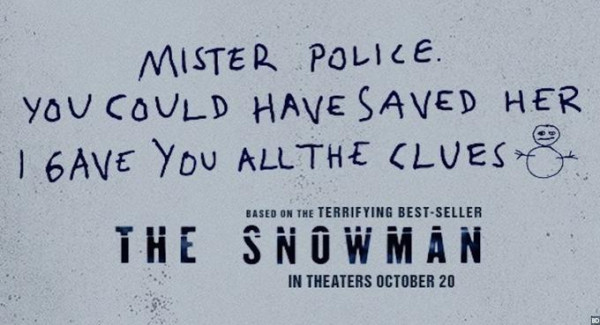 I spoke to @charlyne_yi and her feelings/safety are all that matter to me. We’re good. I owe you nothing, Twitter. You’re lucky to have me.

I’ll say it again. I spoke to Charlyne. I believe her. I’m about HER feelings/emotional health right now, not Twitter’s. That okay with you? https://t.co/aQU5dGqKuY

I will say this for the last time. Do not hold women accountable for the actions, decisions or words of their partners. Don’t. Do it.

- Follow-up to this post
- Amber's husband David Cross was called out by comedian Charlyne Yi for racist comments he made to her ten years ago.
- David issued a weird non-apology defending his playing "an asshole racist southern character." Amber said since David apologized, she doesn't want her name dragged into this mess.
- She now says she believes Charlyne's version of events.

#FamkeJanssen on why she exited the #XMen franchise: "They gave up on me" https://t.co/UGhByIs6wM pic.twitter.com/bfPOWvxtfS

CLAP BACK JEAN ! She didn't lie. Let's examine: If you aren't Wolverine, Magneto, Professor X, or a horribly recast Mystique, you don't get to do shit. (Or if you're Psylocke, you get three lines total) Also you get recast terribly (Mystique & Jean). Anna Paquin and Halle Berry got blamed for "terrible" performances, but really now...Anna said she wanted to fly, and Halle had to literally fight to get screentime in X3, and got blasted for being difficult.

officialjld Chemo #2: finito. We are NOT fucking around here. “I’ve got the eye of the tiger. The Fighter dancing through the fire cuz I am a champion and your’re going to hear me ROAR.” Thanks to @mrtonyhale & @timothycsimons & @katyperry for their hilarious and loving inspiration.

How lucky am I that these bozos have my back? What a moving inspiration to my day. Thanks to @MrTonyHale & @timothycsimons & @katyperry pic.twitter.com/kjFxOnxI0I

And GUESS WHAT!!? THE CON X : COVERS is OUT!!!! Go, stream, download, buy, listen over someones shoulder at work or school! pic.twitter.com/wjDQdccmSN

You can stream the rest via spotify or via their youtube channel.

ONTD, which cover is your favourite?

Have you ever passed out for seeing blood, ONTD? Y'all taking care of those bods? TYFYA!

( Collapse )
· Paris is in Aguadilla, PR helping distribute water provided by Bethenny Frankel's organization (??) B Strong
· Bethenny was on the ground in the aftermath of Hurricane Harvey in TX and made headlines during her visit to Puerto Rico after Hurricane Maria struck the island, wiping out power & roads and killing at least 49 people (it's difficult to know how many people were killed - & the tally will probably be much higher - because of the damage and how poorly relief efforts have been handled by the Trump admin)
· 29 days after the hurricane struck PR, almost 80% of people have no power and 1 million are without water. There has been concern about contaminated water (although water from 3 wells in Dorado were recently tested & determined to be safe) while Puerto Rico's state epidemiologist Carmen Deseda says there were 74 suspected case of leptospirosis in October (PR usually sees about 60 per year) because of standing water

I love this!
SOURCE

.@JessieJ talks new album R.O.S.E.: "I need to nurture the side of me that is why I did this in the first place" https://t.co/I75VbhNVrv pic.twitter.com/UecALW5Hpr

Former bisexual and current heterosexual who discovered herself after finding God and rom-coms Jessie J is coming out with a new album.

When asked about whether or not there where going to be sex songs she said:
"There are definitely songs on this record about the physical form of penetrational sex"

In other Jessie J news, she has a couple new songs out

Weinstein's people put out a statement refuting Lupita Nyong'o's claims that Harvey harassed her, saying Harvey has "a different recollection of events" and that Lupita supposedly invited him to see her in "Eclipsed" on Broadway.

15. I Saw The Devil (dir. Kim Jee-woon, 2010)
On a dark road, taxi driver Kyung-chul comes across a scared female motorist stranded in a broken-down vehicle. He pulls over - but not to help her. When the woman's head is discovered in a local river, her devastated fiancé, Kim Soo-hyeon, a trained secret agent, becomes obsessed with hunting down her killer. Once he finds Kyung-chul, things get twisted and a demented game of cat and mouse begins.

Shay on the Spin-Off News: “I was super excited for everybody when I first heard about it — I think it’s amazing. It’s going to be so much fun for Sasha and Janel. And why not? The fans love it. For me, it was like hearing that Sex and the City was getting a movie. I was such a huge fan of that show, and that just extended my enjoyment of it. So I think it’s great. Some of the fans may have grown up and moved on, but other fans want more. They want to find out what happens to certain characters. This show will really get into the aftermath of what happened in Rosewood.”

Other than Instagram vacationing, Mitchell is busy and has several projects on the way: She’s set to star in The Heiresses by PLL Troll I. Marlene King. She has an upcoming horror flick titled Cadaver and is also filming her Lifetime drama television show You. All while teaching dance classes at 8pm in Studio City at the Millennium Dance Complex.

ONTD, will you be supporting Mitchell and her upcoming projects?

Director Gulliermo Del Toro shared the poster for his movie, Shape of Water, on reddit.

Hey everyone, Guillermo here. I wanted the Reddit community to be the first to see the official artwork for my new film, The Shape of Water. Enjoy! from movies

From master story teller, Guillermo del Toro, comes THE SHAPE OF WATER – an other-worldly fairy tale, set against the backdrop of Cold War era America circa 1962. In the hidden high-security government laboratory where she works, lonely Elisa (Sally Hawkins) is trapped in a life of isolation. Elisa’s life is changed forever when she and co-worker Zelda (Octavia Spencer) discover a secret classified experiment.

Shape of Water will be released on December 8th, 2017.

Mods, I hope it is all right now.

The demon finally makes its presence known; Andy, Rose and the children are set on a collision course with the supernatural presence; Disturbing new information about the conspiracy comes to light. (Air date: November 3, 2017)

Everyone should be watching this brilliant show, tbh! Human Disaster Rebecca Bunch is a gift.

The musical numbers were great tonight and were such great homages.

Niall Horan is out promoting On the Loose Flicker.

During the interview, "Harry Styles" pops out and scares Nail.

A real picture displayed on the screen behind them would have sufficed.

Speaking of frightening things, ONTD what are you going to be for Halloween?

she attended a match between los angeles lakers and los angeles clippers at the staples center on thursday. she was sitting courtside. she's rumoured to be dating blake griffin who plays for the l.a. clippers.

Kate del Castillo is a Mexican actress and telenovela star.

She says she and Penn had sex while filming her three-part documentary on the drug lord.

“I never fell for him. We had sex. We’re both adults, single, and something was going on, but that was it. It was business.”

In other news, Penn is trying to block the documentary because that he believes the documentary implies he had a hand in helping the U.S. Department of Justice (DoJ) in their apprehension of the infamous drug lord.

who are you rooting for, ontd?