One of Demi's songs off her newest album Tell Me You Love Me has fans wondering if she secretly has feelings for Nick Jonas. The song in question is called "Ruin the Friendship," and in a recent interview, Demi said the following:

"I was frustrated with a certain situation and I was like, 'You know what, I'm just going to write about it.' And so I did, and sent [the songs] to that person, and that was...Interesting. Any time you send a song about the person, to the person—it's ballsy. It's like, 'Hey! Here's my feelings for you!'…They knew [about my feelings], but neither of us had acknowledged [them] before. And then it turned out that person had written a song about me, and we exchanged songs."

The song opens with the line "Put down your cigar and pick me up," and Nick is known for his love of cigars. Other lyrical clues include mention of a guitar, another songwriter, and a long-lasting friendship full of history.

Listen and decide for yourself...

#StrangerThings2 returns to the Upside Down with new monsters and mysteries! Get exclusive scoop from the set: https://t.co/mg8UYM58f7 pic.twitter.com/IxjTXee6qY

Exclusive: Get a sneak peek of #StrangerThings2 with these new images: https://t.co/rfCCIjXlrJ @Stranger_Things pic.twitter.com/PFpfwg3Hqe

- They were some of his first auditions
- He didn't audition to be Pacey, as it was after the show had already started
- Is asked about an O.C reunion and responds 'For the right amount of money, I'd do Blues Clues' (lol)
- Talks about his show StartUp

FWIW... Adam Brody also said during our interview that the reason he wasn't in the #GilmoreGirls Netflix revival is: he wasn't asked 😭

ONTD, what kids/teen tv show did you want to be on?

Is anyone watching the new season?

Christine Sydelko is being called out for white privilege after a problematic tweet, but what do you think? 🤔https://t.co/KTIFsQff9I pic.twitter.com/9odKixM9pj

Christine Sydelko, the Vine and YouTube star who feuded with Halsey earlier this year, is getting called out for white privilege after she bragged about not getting arrested when she was pulled over with weed, no license, and a dried bloody nose. Christine tweeted "I got pulled over with a dried bloody nose on my face, a lit joint, and no license and didn’t get arrested it’s amazing what crying will do" and fans immediately called her out. Christine's tweet hasn't been deleted.

I got pulled over with a dried bloody nose on my face, a lit joint, and no license and didn’t get arrested it’s amazing what crying will do

To celebrate the RMX/RBN vinyl, which obviously I didn't ask for, here's a throwback to the Body Talk Tour. The film mixes live footage, behind-the-scenes shots, and interviews with Robyn from her 2012 tour around Europe.

The Queen of Pop also confirmed a reissue of Body Talk on vinyl.

Have you given up on Robyn yet?

ONTD, did you watch Will & Grace? Are you ready to make America Gay Again? do you want more scary orange balls?

Camila Cabello performed her new single 'Havana' (and 2 other songs) on The Today Show this morning. She dedicated the performance to Dreamers (and her band wore 'I Stand With Dreamers' shirts).

The song is currently #6 on US iTunes and #2 on UK iTunes.

Lmao how you gonna go and give us ANOTHER new Liam 8 seasons into this shit?

Kimbra of the smash 2012 hit "Somebody I That I Used To Know" releases her lead single for her new album "Primal Heart" coming in 2018.

What albums are you exited for ONTD?

Sarah Jessica Parker also confirmed there are no plans for a third movie:

'We're Not Doing It:' Sarah Jessica Parker Confirms There Will Be No Sex and the City 3 https://t.co/L8l5V7tOQ5

“I’m disappointed. We had this beautiful, funny, heartbreaking, joyful, very relatable script and story. It’s not just disappointing that we don’t get to tell the story and have that experience, but more so for that audience that has been so vocal in wanting another movie.”

Up-n-coming megastar Austin Mahone had an unfortunate run in with a bird in Venice while on location for a new ad campaign with his friend Cameron Dallas. Dress from head to toe in the latest, expensive 'fits and fashions from D&G, the singer was strutting his stuff when a pigeon viciously assaulted him, trying to get into his mouth.

Neither Austin or the pigeon could be reached for comment.

ONTD: What is your craziest run in with an animal?

The View talks about Stephen Colbert's #PuberMe campaign which encourages celebrities to post awkward puberty photos on Twitter with the hashtags #PuberMe and #PuertoRicoRelief. He would donate $1,000 for each celebrity who posts from his Ben & Jerry's AmeriCone Dream ice flavor to the One America Appeal (the hurricane relief effort that is being done by the five ex-presidents of the US).

They talk about Reese Witherspoon commenting about marrying at 23 and having two children by 27. Reese comments that she didn't even know herself. The panel talks about their own experiences.

The panel then talks about the four cabinet members who are in hot doo doo for using chartered flights. Sunny argues you could've taken a commercial flight or even gotten on Amtrak. Sara then finds contradicting quotes from Tom Price during his time in Congress. There is a timer on Tom Price's position in Trump's cabinet.

The days are numbered to the arrival of Meghan McCain on the View. This is my first time watching the show this week.
SOURCE: 1, 2, 3 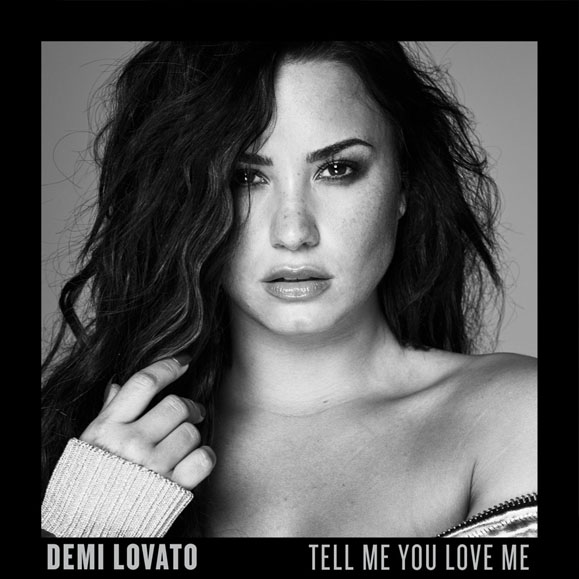 Demi's album just came out and everyone is shook

"On Tell Me You Love Me, she channels the drama (mostly breakups and matters of the heart) that once consumed her life, making for the strongest, most enduring body of work the singer/songwriter has ever created. (...)There's a stark contrast between the past five albums Lovato has released and Tell Me You Love Me. It's more savory and soulful, and influenced by commanding voices like Aretha Franklin, Christina Aguilera and Kehlani. "I don't have much fun singing the pop songs," she reveals. But while the album leans towards more of a slick, modern R&B sound with the help of super producer DJ Mustard, among others, she hasn't abandoned the pop tendencies that brought her this far(...) On Tell Me You Love Me, it seems Lovato has finally found her voice: fresh, fierce, and unapologetic." - Grammy Academy

Tell Me You Love Me, aka Demi's Dangerous Woman, is out now on spotify and itunes. The target version contains two extra songs called Smoke & Mirrors and Ready For Ya.

ONTD, what are your favorite tracks so far?

Idris Elba was somehow passed over for the role of Gaston in #BeautyandtheBeast https://t.co/wlkwLGVibS

"I honestly love musicals. I auditioned for Beauty and the Beast. I really did, for Gaston. I called and said, ‘Listen, I want in!’ So somewhere they have a tape of me singing.”

He lost out to Luke Evans

source
I want to hear that tape

#BladeRunner2049 Reviews Make it Clear the Sequel is One of Roger Deakins’ Major Achievements: https://t.co/ATAhnmOwFP pic.twitter.com/j5PsiVUhsw

Reviews for Blade Runner 2049 are now starting to pour in and one thing is clear: critics can't stop gushing over Roger Deakins. The iconic cinematographer has amassed 13 Oscar nominations throughout his career yet has never won (or had an award sweep). It's looking more and more likely that will finally change.

A roundup of what several critics had to say about his work behind the cut:
( Collapse )

He just really liked this movie, which came out this past June and only made 8.9 million at the box office, and couldn't understand why it got panned so much. In the end, he says not to take him too seriously but that he still liked "The House".


He does sound fired up though once he looked up the score for a film that he apprently hates, the 1998 film "Bulworth", written/directed/starring Warren Beatty

Nah but y'all gave this shitty racist unfunny fucked up ego trip of a movie a SEVENTY FIVE?!?! Ittfn https://t.co/LDmR8wtvbw


source:1/2/3/4/5/6
What's your favorite movie that was critically panned?
What's a lauded film that you absolutely hate?

-The Heiresses is based on a book by the PLL author Sara Shepard, and PLL showrunner Marlene King will serve as executive producer and writer of the pilot episode

-It'll be a family soap opera set in the diamond world. The Saybrooks are a household name, but all the shit surrounding a car crash that killed someone one year ago drove a wedge between two of the heiress cousins. But they end up coming together again when some other tragic shit happens ,and they bond all over again. They have to solve the mystery of who's trying to kill them!

-ABC has given it a pilot commitment

-It's not known what role Mitchell will be playing yet, but she is starring

"Today, we end this war between us."

The new series of #PeakyBlinders.

Includes songs by bffs Selena Gomez and Haim, as well as other pop/alternative songs.

What songs are you currently listening to, ONTD?

Miley Cyrus sang The Climb from the Hannah Montana movie on instagram live.

Source: Instagram
ONTD, what were your favorite shows, movies, and songs from the Miley, JoBros, Selena, and Demi Disney era?

Simon opened up about American Idol recently in a new interview and he had a few things to say...

- Doesn't think singers should judge cause they're not gonna be looking for the next star they want to stay the star themselves/dont want their replacement, 'Do you think Madonna wants to find the next Madonna? No she wants Madonna to be more successful."
- When asked what he thinks of katy perry doing idol he says "Good luck"
- Thinks they're wasting time and money on judges and not talent, "it doesn't matter about the judges, it is about the contestants and that is why everything has gone the wrong way right now. You know when we cast ‘Idol,’ it was done so quickly but the only thing that mattered was, 'Do you have the right people to help you find the stars?'”

SourceSource
Do you think Katy's gonna try and sabotage the contestants to keep her career ONTD?

"Go Big or Go Home" - Harper Avery arrives at Grey Sloan, putting Bailey on edge. A familiar face from Meredith’s past returns as a patient, and Amelia tries to manage a secret [Spoiler (click to open)](she has a brain tumor), on “Grey’s Anatomy,” Thursday, October 5th on ABC.

welcome back grey's fans! what did you think of the double-episode premiere?

ABC has finally found their third judge for American Idol in Lionel Richie.
Lionel had originally passed over monetary issues (the offered him less money than he asked) but ABC went back to him after rapper Common passed on the offer to come aboard to judge the show.
Luke Bryan who signed on earlier this week came aboard with a deal worth $13 million. Lionel Richie agreed on $10 million.
Because of this, the show has gone way over budget. The intended budget for the talent was reported to be $50 million but has no gone over $60 million with Katy's $25 million and Ryan Seacrest's $15 million dollars deals.
Production is set to began next week.
source

Synopsis: When a young Latina woman is brutally murdered, Intelligence suspects she may have been working as a drug mule. With Antonio (Jon Seda) leading the case, the team's investigation takes them into the grim world of meat processing, and the discovery that there may be a different motive behind her death.

Thoughts on the premiers? Personally I found PD really underwhelming (as expected). I'm glad Antonio's back but wth @ that undercover scene?? Fire was ok though, so happy to see Donna back again. Also they weren't exactly subtle with Justice got cancelled lmao
Collapse