Alex & Sierra, who won The X Factor USA in 2013, announced they broke up and have decided to stop making music together:

Crying reading your responses. Didn't expect such understanding and kindness. Truly love you ALL. Always.

thats sad, i really liked their album but things did seem quiet. hopefully they can still succeed on their own.

Like a lot of fans, Julee Cruise wasn't happy about the finale. On her Facebook, she sounds insulted by the experience she had with David Lynch (the "Emperor") and executive producer Sabrina Sutherland (who she calls a "bitch") this time around whereas in previous posts she seemed excited and spoke positively about Lynch. She now even goes so far as to say that she was "bummed" when she heard the show was coming back and tried to avoid contact with them.


source
how many emotions do you feel about the finale?

Duchess of Cambridge is suffering from severe morning sickness, as with her previous two pregnancies https://t.co/KatVoa29ud

-Kensington Palace has announced that the Duke and Duchess of Cambridge are expecting their third child.

-Kate Middleton is apparently suffering from severe morning sickness as she did with her previous pregnancies.

-Their son, George, is four-years-old and their daughter, Charlotte, is two.

-This will be the Queen's sixth great-grandchild.

-Lil' Wayne was apparently found unconscious in his hotel room in Chicago and was taken to the hospital where he suffered another epileptic seizure.

-He has previously been hospitalized for seizures both in 2013 and in 2016.

-Currently on tour with Rae Sremmurd and there is no word yet on when he is expected to be released.

Caitlyn Jenner Reveals She's Still Not Speaking to Kim Kardashian: 'It's a Big Loss in My Life' https://t.co/QpzGqaTEcD

"Though not confirmed, many believe it could have something to do with the premiere of the new movie It."

that house is goals... Girls Made of Snow and Glass, by Melissa Bashardoust (September 5)
At sixteen, Mina's mother is dead, her magician father is vicious, and her silent heart has never beat with love for anyone—has never beat at all, in fact, but she’d always thought that fact normal. She never guessed that her father cut out her heart and replaced it with one of glass. When she moves to Whitespring Castle and sees its king for the first time, Mina forms a plan: win the king’s heart with her beauty, become queen, and finally know love. The only catch is that she’ll have to become a stepmother.

Fifteen-year-old Lynet looks just like her late mother, and one day she discovers why: a magician created her out of snow in the dead queen’s image, at her father’s order. But despite being the dead queen made flesh, Lynet would rather be like her fierce and regal stepmother, Mina. She gets her wish when her father makes Lynet queen of the southern territories, displacing Mina. Now Mina is starting to look at Lynet with something like hatred, and Lynet must decide what to do—and who to be—to win back the only mother she’s ever known…or else defeat her once and for all.

Nooo why is this season so short

Steve Aoki wants to collab with Little Mix and introduce them to EDMhttps://t.co/zsjt55gcdJ pic.twitter.com/V86POBIKTz

- He says they are a great group and also incredible singers, he loves all of their songs and knows all the words.

Glory Days era is almost over! Get ready for LM5!

“Two federal agents fight their way through nine levels of Hell inside a secret prison known as the Death House. A facility-wide prison break turns their flight into a tour of horrors as they push toward the ultimate evil housed in the lowest depths of the earth.”

In the Video( Collapse )

I feel like the first one to go solo will be Brandon tbh. Anyways, the way they are being marketed and sold is very kpop like. THE ERA OF NEW BOYBANDS IS UPON US and THIS ONE HAS MULTIPLE POC!!!

- ‘He’s splashing out big time and it’s going to be the party of the year. ‘Guests have been told to arrive in Ibiza on a certain date and they will then be collected and taken to the hotel.’

In an interview promoting his latest album, Alex Syntek spends 3.5 minutes shitting on reggaeton and blathering on and on about reggaeton artists' "plucked eyebrows and jewelry".

The whole rant was very "those thugs and their baggy jeans"

He later issued an apology via Twitter:
I admit I made a mistake in the way I spoke. I respect everyone who listens to reggaeton or does it for a living. It isn’t a genre I’m particularly attracted to, but I reaffirm my commitment to musical diversity and respect for everyone’s taste.

For those who don't know, reggaeton is a Latino musical genre which originated in the Afro-Panamanian community in Panama and made popular by artists like El General. In the 90s, it experienced a boom once it made its way to Puerto Rico and was further popularized throughout the world by mixtapes like The Noise series and artists like Baby Rasta y Gringo, Ivy Queen, Daddy Yankee and others. The genre is heavily influenced by Jamaican reggae and dancehall and is now dominated by Dominican and Puerto Rican artists.

Background: DACA is a program created by then President Obama that protects young people—who were brought to the US as kids without papers—from being deported. Nearly 1 million have signed up for it. Politico reports that Trump will end the program in 6 months. At that point, all the people who signed up for DACA will be in grave danger of being deported—they're already registered with the government—back to countries where they will be total strangers. FYI, you'll often hear DACA-recipients referred to as DREAMers, that refers to the DREAM act, a proposed law that would grant all DACA-eligible people a pathway to citizenship.

(Please, please do like the wonderful Alyssa suggests and visit that website. You can also text DACACall to 877-877 to get updates from United We Dream, one of the leading groups in this fight.)

Nearly 1 million young immigrant #DREAMers will be at risk of deportation if @realDonaldTrump ends #DACA. We demand #DefendDACA! #HereToStay

Read and learn what it is to be in someone else's shoes. Then use empathy. #DefendDACA https://t.co/i2ZFleOPFB

( Collapse )
Please call your member of congress (use this site to find out who they are and what their #s are) and tell them to #DefendDACA! There is actually a great deal of bipartisan support for DREAMers and DACA (the two biggest champions of the DREAM Act are Republican Senators Orrin Hatch and Lindsey Graham). So call your 3 members of congress regardless of party!

.@FifthHarmony's He Like That to impact pop radio on September 19. https://t.co/GRiIontzxx


STREAM ON SPOTIFY | BUY ON iTUNES | STREAM ON APPLEMUSIC

With three episodes left, what couples have a chance for a Neil Lane monstrosity ring?

Gigi apologized in Chinese social media Weibo， but she didn't apologize in facebook and instagram, because she don't want you guys know it pic.twitter.com/CHGoRj0nSB

'Don't give up': Dame Judi Dench on the sex lives of older people https://t.co/2xlaM09lIW

ONTD will you still be sexy when you're an octogenarian?

She did so by expanding her brand and business into the US market by giving up her large X-Factor U.K. salary to begin hosting America's Next Top Model and performing for the pope.

She earned money from her Adidas endorsements and reportedly she had an endorsement deal with Coca Cola too.

Sources explained: “Rita is one of the hardest working stars in the business and has money coming in from a variety of sources."
And:
"She is now so big she doesn’t need an endless stream of singles to keep the cash coming in.”

She also spent time filming her role in the final two movies of the hit 50 Shades series.
SOURCE

Hidetaka "Swery" Suehiro, best known for Deadly Premonition and D4: Dark Dreams Don't Die, is developing a new game, The Good Life, where you play as a photographer stuck in a backwoods town trying to pay off your massive debts. And also all the villagers in this town turn into cats at night as well as your player character. And the pastor's daughter gets murdered with an ancient sword

The game is still in the fundraising phase (for $1,500,000 so good luck with that), but Swery has recently tweeted thoughts about having Britney Spears in his game. As either the killer or maybe a joke mode where everyone turns into Britney at night

I'm wondering if anybody would be interested in giving me money to hire Britney Spears for The Good Life... ( ´Д｀★)#TheGoodLife pic.twitter.com/dFl9S3eIQP

''KIM KARDASHIAN WEST 2.0 Mommmy Glam to Date Night Glam Highlight to the Gods MAKEUP! Check out KKW Beauty NOW! Thank you KIM Kardashian West for coming back on my channel! Love you so much! 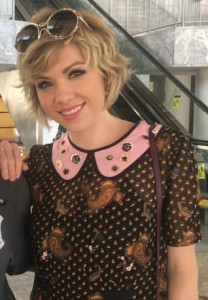 Japan continues to honor and give Carly Rae Jepsen the recognition she deserves by using her smash hit song Cut To The Feeling in a commercial promoting Biore's  new makeup removal line. Carly Rae, who is not a stranger to Japan, will also be paying a visit to the Land of the Rising Sun later this month to promote the release of E•MO•TION Side B+. (preorder here! link)

Finally, Carly Rae will being sitting down to talk to The New Yorker and to perform this October in New York City! Tickets go on sale this Friday here: link

The question since the beginning of mankind: short-hair Carly or long-hair Carly? I used to hate her short hair but she's been looking so good with short blonde hair that I can't imagine her going back to her signature dark fringe and long locks. According to producer Jerry Bruckheimer...

I think it did phenomenal. I mean, you're talking about the fifth [film] in the series in a down market, and the American dollar is so strong that we're getting less returns from foreign. This movie would've [made] a billion dollars had it been back in the same financial [situation as On Stranger Tides], but we lost 27 percent of our money just by the conversion rate... But god it's at what, $790 [million] now? It's amazing.

As to whether there will be a sixth Pirates movie: “Well, I hope we can continue to make it,” he said, “but you know we’ve been having so much fun just promoting this one right now that we’ll just have to wait and see. Hopefully it’s very successful on DVD as the other ones have been. Then hopefully we’ll sit down and see where we go.”

Mario's character profile on the Nintendo website was recently updated, in which he is described as:

"All around sporty, whether it’s tennis or baseball, soccer or car racing, he [Mario] does everything cool. As a matter of fact, he also seems to have worked as a plumber a long time ago..."

The news that Mario is no longer a plumber became a "Twitter moment" with many fans shocked. Source article points out that back in 2010, Shigeru Miyamoto, who created games like Donkey Kong and Zelda, reminded people that Mario was actually 'basically a carpenter' in Donkey Kong . Mario became a plumber in 1983's Mario Bros.

John Legend reveals he once tried to DUMP wife Chrissy Teigen... but she wouldn't let him end the relationship https://t.co/V7kXNiBj8J

John Legend reveals he once tried to DUMP wife Chrissy Teigen... but she wouldn't let him end the relationship.