"Black don't crack, except if you're a crackhead. There's no such thing as a young crackhead."-Marlon Wayans
Marlon Wayans walks the idiot interviewer through his daily 150 vitamins regimen, which he takes to live long enough to go clubbing with his kids, and he explains how his mom predicts his movies' success.

Which celebrities do you think look even better with age? Did you watch "Naked"?

During his time off, Biebs has been surfin' Insta, coming to the page of a small gym in Georgia which had only about 1000 followers, DMing them wondering who one employee was that was posted in their latest video. That girl, 22 year old Jessica Gober, has since turned him down because she has a boyfriend and good taste/standards.

Did this actually just happen... lmao
Justin Bieber just messaged the gym that I work at and asked who I was hahahaha WTF pic.twitter.com/mktcdB1iDP

( Collapse )
SourceSource
Have you ever slid in the DMs to be rejected, ONTD?

Jeremy Renner is asked about Elizabeth Olsen's claim that he resembles Grumpy Cat, as he's sitting next to the voice of Grumpy Cat, Aubrey Plaza.

On the same night that racists are carrying torches in Charlottesville I see this tweet. Choose well what kind of human you're going to be. https://t.co/v3FriFsdRC

- A bunch of angry white men, also known as the "Alt-Right" and white supremacists, held a rally last night with torches and what not. They were chanting "white lives matter" and also chanting nazi slogans. A group of opposing students with NO police protection protested against the Alt-Right at the rally.

- An Indian diplomat said they treat Ivanka, who tries to stay out of politics, as they treat "half-wit Saudi Princes" (!!!!) ahead of a summit where she will lead U.S. delegation.

- Trump said they are thinking of military intervention in Venezuela. The Pentagon has refuted those claims. Ben Sasse, member of the Senate Armed Services Committee, spoke out against Trump and said "Congress doesn't vote to spill Nebraskans' blood based on who the executive lashes out at today".

update on the DaddyOFive stuff -
Mike & Heather Martin were recently charged w/ 2 counts of neglect of a minor, according to court filings. pic.twitter.com/JsXocGXMCq

Kylie Jenner's Plastic Surgeon Credits Her for an Uptick in Copycat Procedures Among Young Women https://t.co/OwlsoWLcNW

· The Karjenner's plastic surgeon Dr Ourian says Kylie's confession that she got lip injections have "empowered" her young fans to get procedures
· Says his patients use their visits to his office as a social media bragging right (remember when we thought Juicy tracksuits & going to Kitson was sad?? lol)
· Refers to Kylie's work as "minimal"

Have you ever voluntoured, ONTD?

.@MarcJacobs is bringing back that coveted '90s style with some help from your favorite hip hop legends: https://t.co/RpmyEqPI7m

In an interview with InStyle magazine about his hip hop-inspired fall collection, and touched on criticism stemming from last year's show in which he was criticized for cultural appropriation after sending mostly white models down the runway with multi-colored dreadlocks (inspired by Lana Wachowski). Here are some choice quotes:
“It’s a very weird time,” Jacobs says. “I feel disconnected, like I don’t see anything in this day other than the Internet as being a thing. I feel out of touch with what today really looks like. But that’s the thing. You walk in here and see Hype and all this, and how happy people are, and it’s worth it.”
...
“What I learned from that whole thing, what caused me to pause after it died down a little bit, was that maybe I just don’t have the language for this, or maybe I’ve been insensitive because I operate so inside my little bubble of fashion,” Jacobs says.
( Collapse ) 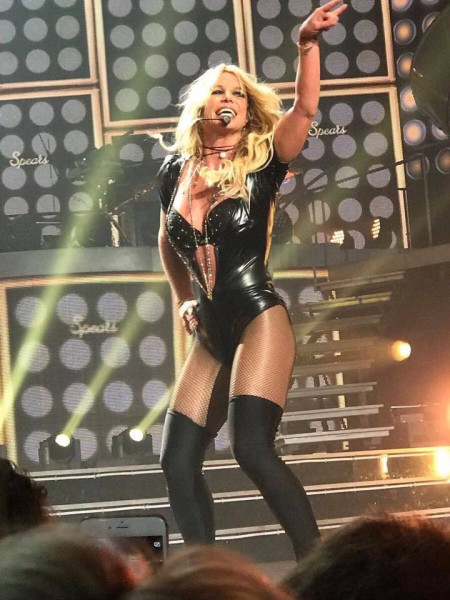 Wanna go see Britney live in Vegas? Well you better work bitch go soon as the star has only 30 remaining shows until she wraps her residency on the 31st of December. Info and tickets here: https://www.britneyspears.com/events

The season has already been extended from 12 episodes to 16 and renewed for a second 13 episode season! The show returns on September 28th!

starts at 7 minutes into the video

They grew up so fast in #Smallville. https://t.co/7tJyFLH833

It's been almost 16 years since Smallville premiered on the WB. While the CW has tried (and failed) to rekindle some of the television magic of the first four seasons, Tom Welling's portrayal of a young Clark Kent still resonates with fans and casual viewers.

Tom Welling is finally opening up about why he never wore the Superman suit on #Smallville https://t.co/9OC9ZvW2cN

While promoting his new Fox series Lucifer, Welling finally addressed the Smallville series finale in which Clark ripped open his button-down shirt for the only time.

ONTD: What is your go-to easy cosplay?

"The truth is: we are living at this time. And we are tolerating it." #Charlottesville pic.twitter.com/U4qBQl93qV

+ Neo Nazi's in Charlottesville continued their tiki torch fuckery from last night into today morning and afternoon. Neo Nazi's want to take back this country and were protesting in the name of the president. While everyone reacted to this with horror, the Urinator-In-Chief took a long time to tweet out 140 characters. The president called it "sad!" (literally) and blamed violence from many sides.

+ A car plowed into counter protestors and over 10 are injured. One victim of the crash passed away some time after. The driver reversed away from the scene of the crime but they eventually caught him. The driver did not shout "allahu akbhar" so we have no way of knowing intent.

Drake and Future Sued for $25 Million By Woman Who Was Allegedly Raped at Their Concert https://t.co/bjKo90trEH

A woman was allegedly raped at a Drake and Future concert (on August 14, 2016 at the Bridgestone Arena in Nashville, Tennessee), is suing the rappers — among others — for $25 million, claiming their negligence led to her attack.

The woman claims Leavy Johnson had outstanding warrants for assault at the time of the alleged rape and claims the arena, the touring companies, the company that provided the security and the rappers all should have known that employing Johnson would “pose an unreasonable risk to others.”

Johnson has since been arrested and charged with rape.

The woman is seeking no less than $25 million in damages, plus court costs.

Synopsis for 2X11, "Gone as a Girl can Get”: [Spoiler (click to open)]'Allies become enemies when a vengeful wish goes awry.'


I won't see the episode till tomorrow, post-ep interviews are HERE and HERE, feel free to discuss.

She stayed so calm, I would've freaked out tbh pic.twitter.com/C9vUD5x1pL

For the second time this week an uninvited fan went on stage in a very misguided move to get closer to their idols. Lana handled it like a pro, laughing it off and saying 'you know I don't mind hugs but...'

The actress slammed an airport employee for referring to her by the pet name “sweetheart.”, as well as putting his hands on her.

“This is the kind of thing to me that happens which I categorize as everyday sexism. And it is so easy to let it go and not to speak up, particularly when it is so easy for someone to push back and say, ‘Oh, I was just being polite.’"

“I’m very happy to report that the manager with which I spoke immediately apologized. … He had a very long conversation with the employee and he also assured me that their training … is to call people ‘sir’ and ‘madam,’ and that touching someone is totally inappropriate.”

#YoungerTV: Creator Darren Star shuts the door on one of the show's scandalous couplings https://t.co/tAi5p4Y1dK pic.twitter.com/LLI29LAn9G

What is the dirtiest thing you've written to a celeb?

Above is the first real look at JK Rowling's new TV series, "Strike" -- formerly Cormoran Strike, based on Rowling's series of detective novels under the pseudonym "Robert Galbraith" which include Cuckoo's Calling, The Silkworm, and that confusing third one with a lot of unnecessary casual racism and no real plot.

BFI Southbank debuted the first episode of the series a few nights back, followed by a Q&A with the cast including stars Holliday Grainger and light of my life Tom Burke.

Are you going to watch, ONTD? Are you still concerned that Tom Burke is too sexy-ugly for the role?

The show premieres on BBC One on August 27th, 9pm. The show was supposed to have been picked up by HBO as well, though there's been no formal announcement of when/if they'll premiere it for North American audiences.

One final Turn: With Simcoe, Samuel Roukin mastered the art of evil https://t.co/hEOzKsskBT

watch post? I'm not ready. I'll miss Robert so much

Actor James Cromwell served a brief prison sentence for refusing to pay a fine after a protest (ONTD post) and the Huffington Post caught up with him after.

i wrote a little feature about james cromwell, who won’t stop getting arrested: 77 Years Old And Raising All Hell https://t.co/Z3JNWdyCrE pic.twitter.com/QltGKLrKPi

I rec reading the full interview, it's got great photos too.

- A source close to the family says Kylie Jenner‘s family “loves Travis” after the two celebrated her 20th birthday
- The source says: “Kylie and Travis are doing great. Things are so different from Tyga. There is no drama with Travis. He is a cool guy. He treats Kylie with a lot of respect and love. Kylie is very happy.”
- Travis (25, rapper) gave Kylie a diamond necklace for her birthday

Joanne thought it'd be a good idea to make a feel-good hashtag #ThisIsNotUs in response to the events in Charlottesville. She also encouraged her people to send tweets to Donald Trump telling him to #BeKind. She quickly got dragged by people pointing out that this has always been the US and specifically white people.

I pray a true leader will rise to expel hatred from America. This is not US! This is Anti-American #ThisIsNotUS #Charlottesville #BeKind

I know we are not created to hate each other, but to help & love. Use hashtag #BeKind #ThisIsNotUS to tweet positive messages. #Charlotte

Tweet @realDonaldTrump & tell him how you think he could #BeKind and be a better leader. #ThisIsNotUS #BeKind #Charlottesville #POTUS pic.twitter.com/9tewk6rccf