Debra Tate owns the rights to Sharon's image (huh?) and Tarantino hasn't contacted her yet

What is the most embarrassing thing you did while drunk, ONTD?


Has your boob ever randomly popped out when you least expected it, ONTD? 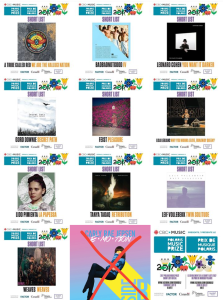 The short list for this year's Polaris Music Prize was revealed yesterday morning. Unfortunately, ONTD's fave Carly Rae Jepsen did not make the list. The winner will receive $50,000, while the other 9 finalists will receive $3000 each. The winner will be announced at a special gala in Toronto in September. Here are the 10 albums that made the list:

In more uplifting news, Carly performed Cut To The Feeling live for the first time in Chicago on Tuesday. The show was sponsored by M&Ms Chocolate so sis probably got paid $50,000 anyway!

Go Feist! Get that second win!

Today's hosts: Sunny Hostin, Sara Haines, Jedediah Bila and Paula Faris
Today's 🔥 topics:
It's Friday. We hopefully got our last day of Caitlyn Jenner with the panel for a long time. Whoopi was sacrificed so that we could get Paula. Think about this a panel with Caitlyn, Paula and Jed. That's today's panel folks.

The panel talks about 45's comments to Macron's wife during their first meeting. Sunny is livid that you shouldn't comment like that on a first meeting. Jed is livid for other reasons. Why the fuck is the media covering this instead of the healthcare bill? What have they done to Jed? 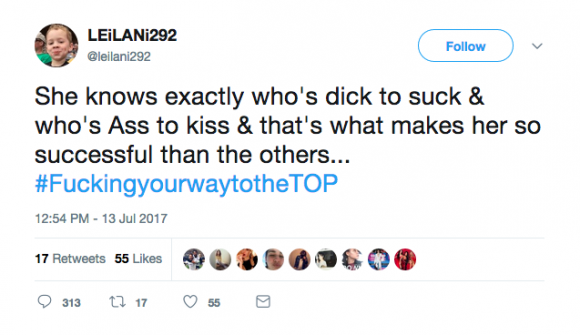 Dinah Jane Hansen's aunt Leilani has called out Camila before, but this is by far the most savage thing she's said. The tweet has since been deleted.

do you know whose dick to suck??

- The marching band spelled out the names of French cities along the parade route, and performed a medley that included "Digital Love," "Get Lucky," "One More Time," and "Harder, Better, Faster, Stronger" to the delighted French president and confused American president, who had probably been extremely excited for his very first military parade when he woke up that morning.

- The presidents' meeting concluded with an incredibly awkward handshake, confirming that, yep, Trump is still red-assed about the first one.
( Collapse )

Turns out they had money for the for the girls. They were even going to fly girls in. It was Jason King, Valentina's manager, lying.

Thing is, it took me saying something to get the truth. I'm sorry it had anything to do with @katyperry https://t.co/sMtWJzfQtN

I said Yes to the @katyperry vid too cuz she knew every word to Boy Is A Bottom and I watched her sing along when DWV performed it. I 💙her

"FULLMETAL ALCHEMIST" is in theaters December 1, 2017.

Two brothers set out on a journey in order to take back everything they have lost. Fullmetal Alchemist is a legendary comic by Hiromu ARAKAWA that has sold over 70 million books worldwide. This emotional adventure finally gets a live-action version! An epic, highly-awaited fantasy action movie has begun to move!

Liam Payne gets fans excited after stripping off on stage – watch 🔥https://t.co/q63JWgJfCI pic.twitter.com/zIZcdljTfa

After weeks of teasing and performing Strip That Down all over the globe, Bear's father finally did just that. Lime performed at the VirginRadio Officiel Showcase in France, kicking off his set in a track jacket before showing off his post-pregnancy body.

Payne is currently working on his debut solo album, while promoting STD and his bop with Zedd.

Taylor Swift broke her instagram silence yesterday to promote Selena Gomez's new single "Fetish."  She did this previously for the band HAIM and her friend Lorde.

US Weekly reports that she's staying undercover on purpose.

US Weekly writes that a source said, "Taylor and Joe are the real deal.  This is a very serious relationship, but after what happened with Tom Hiddleston, they were determined to keep it quiet."

- he submitted an audition tape to Guy and producers in London for the starring role.
- the tape included Avan singing a song from the musical.
- he's now in the mix to land the lead.

The perks of having an extensive catalogue that spans two decades? Material always finds its way to the web! This week we were #blessed with a collection of Britney's unedited vocal takes from the recording sessions of her critically acclaimed album Glory #buyGloryoniTunes as well as yet another Toxic recording session. Enjoy!

.@iamcardib, @kflay and @carlypearce are on our list of ladies we want to see crash the charts' sausage party https://t.co/cqgeRPiuqX pic.twitter.com/Ztlh5envny

With just-released tracks from Kesha, Demi Lovato and Selena Gomez, perhaps the pendulum could swing back toward women residing in top of the Hot 100, but probably not lbr. While it’s impossible to predict, here are 13 5 ladies Billboard would like to see crash the Hot 100 sausage party.

Zendaya and Tom Holland took to Twitter to mock the People/Teen article about them dating. @Zendaya Tweets:

Wait wait...my favorite is when it says we go on vacations together HA! I haven't been on a vacation in years!😂😭🤣hbu @TomHolland1996 ??? https://t.co/zSkvcfzzTa

To which @TomHolland1996 replied:

somewhere in prison, quizblorg is breathing a sigh of relief.

ONTD, have you gone on vacation this Summer?

- They have opened investigations into the death of John Bernecker (the stuntman who died after a fall on the set of The Walking Dead)
- the investigation (opened today) could take up to six months to complete.
- It's the first stunt-related death in the United States in more than 17 years.

Announcement of the 13th Doctor will take place on Sunday (yes, THIS Sunday) after the Wimbledon Men's Final.

Are you as bitter and pressed about Capaldi leaving as this OP, ONTD Gallifreyans?

Synopsis: The DEA turns its attention to the richest drug trafficking organization in the world: the Cali Cartel. Led by four powerful godfathers, this cartel operates much differently than Escobar's, preferring to bribe government officials and keep its violent actions out of the headlines.

kelelam TO ALL MY RIDE-OR-DIEs...

The album is called "Take Me Apart".

Michael Mailer, director of the Alec Baldwin-starring film Blind, was criticized by the Ruderman Family Foundation, a disabled advocacy organization.

- He says the statement is unhelpful to disabled advocacy, and discredits Academy Award-winning performances (Daniel Day-Lewis in My Left Foot, Jamie Foxx in Ray, Jon Voight in Coming Home, Al Pacino in Scent Of A Woman, and Eddie Redmayne in The Theory Of Everything)
- He says in order to greenlight an independent film, they need a “name” actor so the film can be financed. He does not know any vision-impaired actors out there who have the marquee appeal needed.
- He says instead of coming after Alec Baldwin in the media, the Foundation should focus on creating constructive dialogue and programs to advance actors who suffer from disabilities.

In fact, a number of disabled people were cast in speaking and background roles in Blind.

It hits Netflix on July 28

New #BlindItem: Which Drama Series Is Poised to Whack a Fan Fave — In Its Season Premiere?! https://t.co/x5YgzWrhFw

Though I am flattered by all the support, there is something to be said about not believing everything you can read.

A few days ago when the story first broke that Disney was having trouble casting the role, he also tweeted this:

Table scraps aren't enough, and until there is enough work for POC's of all backgrounds to eat, I refuse to be pitted against my brothers. https://t.co/GxOrFNFuEC

My mom waited tables, and my dad tended bars-- for years! So, when I walk into a #WaffleHouse, and the staff treats me like a king, you better believe I treat them like queens! Thanks to the team at @wafflehouseofficial Charlotte, NC! ❤️

Ariel Winter was once again compelled to defend her clothing choices, going on a Twitter “rant” in which the “Modern Family” actress declared, among other things, “I am not a whore.”

David Strathairn has been tapped for a major recurring role in the upcoming third season of @ExpanseSYFY https://t.co/7dTQKsOgZD

David Strathairn has been cast in a major recurring role in S3, though the actual role is being kept a secret. Popular theory seems to be [Spoiler (click to open)] Captain Ashford , but we don't know for sure yet.

Floating amongst the stars in the VR set. SO PUMPED TO BE BACK!!!!! @TheExpansePO #TheExpanse pic.twitter.com/58PTV3knHv

He's such a great actor, can't wait. Are you all ready for more queen Drummer in your life?