Proving that she's much more than a Vegas legacy act, international pop sensation Britney Spears is preparing to launch her 11-date Asian tour, starting from Tokyo Japan. Brit will perform two sold-out shows there before moving to Osaka and other Asian territories. So how does the Princess of Pop prepare for a world tour? Her instagram has the answers.

Tom Cruise has revealed the title to the sequel of his 1986 film Top Gun.
[Spoiler (click to open)]It's "Top Gun: Maverick"

Home is where the heart is, and there is a whole lot of heart at Raven’s Home.
Friday, July 21st on Disney Channel, after the premiere of Descendants 2!

Does everything you make look like a costume in a bag ONTD?

-There are NO CUT SCENES. They followed the script very closely as she did with Monster (who also had no cut scenes) WB really wants to try to put cut scenes in there (trying to get that Extended Edition I see)

-There is a slightly different No Mans Land walk scene.

-Wonder Woman killing wasn't a hot topic, she kills if she absolutely has to and agrees that when push comes to shove sometimes you have to (when talking about Superman/Batman letting their bad guys constantly get locked up only to break out again and kill more people)

-Already has ideas forming in her head for a sequel

Into The Water
mindykaling: 👒☀️💁🏾

-One of them state “Nowadays, sadly, money trumps patriotism” and how it has become cool to hate America these days

Are you mad that WW and Capt.America are losing their American touch?

Rita Ora took a naked wee in a bin in front of a horrified Nick Grimshaw at Radio 1’s Big Weekend https://t.co/v9ZTiymNE1


Rita is continuing to work hard on revolutionizing the way we pee.

Rita needed to use the restroom before her Big Weekend set but she didn't want anyone to see her outfit before she went onstage so she made the sensible decision and peed in a trash can in her dressing room in front of radio personality Nick Grimshaw.

Grimshaw says she was fully naked and she had to have two of her people holding up her hair up so she wouldn't pee on it before her performance.

Nick Grimshaw:
‘And she just took a wee whilst talking to me, and it was as if everyone in there was like “this is what happens, she just wees in a bin”.

‘She’s taking a squat, naked by the way, like full on naked! And everyone’s holding her hair and she’s squatting going “So Grim what time am I on stage then?”‘

"Despacito" by Luis Fonsi and Daddy Yankee ft. Justin Bieber is now officially the longest reigning foreign language number 1 in UK's chart history. The record was previously held by Manhattan Transfer with Chanson D’Amour in 1977 (three weeks at the top).

Despacito holds onto the No. 1 spot on the british official charts for a fourth week with 129,000 combined sales.

While talking to ScreenSlam during WW's press tour, Pine mentions that it's difficult to do anything new in the superhero genre since you usually see people kill each other "in the outfits" and blow up cities from beginning to end.

"Like I know there's a thing called Infinity War coming out, which I like... I don't... Really? Infinity War?"

are you already over it as well, ontd??

I find it funny when bullies play the victims. 🤔

After Kathy Griffin's weird press conference yesterday, Demi Lovato tweeted out her take on the situation.

She also liked this tweet her Trump-supporting mom made that quotes a video where Kathy said she'll continue making fun of the president:

So @kathygriffin states she will continue making fun of people, kinda like she made fun of my daughter @ddlovato for going into treatment 😱 https://t.co/KCelYFH8W3 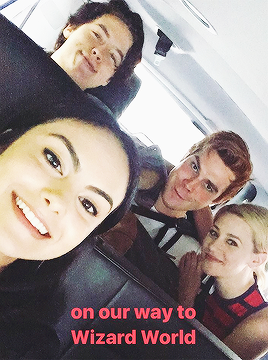 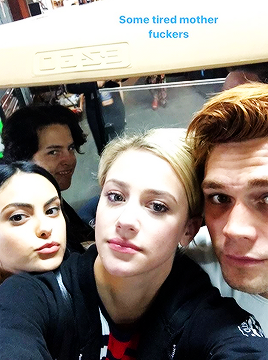 It was just the core four as they answered questions from the moderator and audience. The following is a paraphrase of their answers. No real scoops since the writers are still writing

----
And also, a week ago Madchen posted a behind the scenes of some of the cast filming promos for season two. Unfortunately, they're just walking through dramatic mist rather than wading through real water, but I'm sure the CW will slap some neon colors or do something overly dramatic in post.

beauty post? ontd, what are you loving or coveting?

- Tech Youtuber Jonathan Morrison has a series in which he creates dream desks and workspaces.
- He wanted to make an Ed Sheeran tribute desk.
- He noticed a tweet to Ed Sheeran of a mother who wanted Ed to dedicate a song to her son, Baby Thomas, who had terminal cancer.
- Jonathan managed to get a lot of other youtubers involved trying to reach Ed Sheeran.
- Baby Thomas died. 😢
- They made the video a Baby Thomas/Ed Sheeran tribute.

There have been plenty of unofficial butthurt complaints registered against the Alamo Drafthouse chain via twitter, but now it's official: Seven official complaints have been filed against the theater in Austin. One of them was filed by Stephen Clark, a gay lawyer who doesn't even live in Texas. A civil rights complaint was also filed by a former grassroots coordinator for Tr**p's campaign.

The complaints may have some merit because Austin city codes do forbid public accommodations from limiting services based on gender, sex, race, sexual orientation, etc. It even bans advertising any services limited to a certain group. However, city code doesn't indicate how establishments should be punished if they violate the code. So the city may try to deal w/ the matter informally OR they may pass off the matter to a city attorney for prosecution.

That being said, Clark felt compelled to take action largely because of the Alamo Drafthouse's "snarky" responses on social media. When asked if they ever hosted a men only screening, they responded: "we *did* show the Entourage movie a few years ago." Clark didn't like this one bit: "Their attitude was really off-putting to me … the suggestion that anybody who pointed out to them that this was illegal was misogynistic or insecure."

He must be fun at parties.

Nick Jonas’s gay kiss in the latest episode of Kingdom was too adorable 👨‍❤️‍👨https://t.co/LbYxBraqBy pic.twitter.com/RdJZvzFiZd

After three seasons of teasing, his character Nate is finally exploring his first same sex relationship and kissing other boys.

The next episode airs Wednesday at 8:00 PM on AUDIENCE.

Zach and Tori Roloff — of the TLC network reality series Little People, Big World — have revealed that their newborn, Jackson Kyle Roloff, was born with achondroplasia, the most common form of dwarfism. Jackson was born on May 12, not long before Mother's Day, but the revelation earlier this week is the first time the new parents have talked about their son and his condition publicly.

When Jackson Roloff was born, he weighed 9 pounds and 1 ounce, and was 20.5 inches long. That's right within an average range for most newborns, and someone casually reading about his birth might not have assumed or questioned anything about his health. But fans of Little People, Big World have been curious whether Jackson has the same condition as his father, Zach.

Zach and his wife Tori knew that their child had a 50 percent chance of inheriting the condition. When their son was diagnosed during an ultrasound at 34 weeks, the couple reportedly told their family, but waited until after Jackson's birth to discuss the diagnosis with the public.

I don't even care, I watch this show shamelessly. Matt and Amy's marriage was a MESS. ONTD, what is your favorite TLC reality TV trainwreck?

Multiple celebrities are tweeting about the awful attack on London today. But leave it to the Oompa Loompa Supreme himself (45) to take this opportunity to plug a travel ban while people are suffering and dying.

My heart goes out to everyone in London tonight. Absolutely Heartbreaking.

❤️🇬🇧❤️ My heart is with you London. Please can everyone stay safe. This is beyond tragic but we… https://t.co/Mi8hPeE9tj

Andddd... drum roll...
The Orange Ape himself used this as an opportunity to plug the travel ban BEFORE offering condolences or any sort of prayers/support:
4:24pm:

We need to be smart, vigilant and tough. We need the courts to give us back our rights. We need the Travel Ban as an extra level of safety!

Whatever the United States can do to help out in London and the U. K., we will be there - WE ARE WITH YOU. GOD BLESS!

What do you think, ONTD? Do you think we need a travel ban?

Taylor and Joe Alwyn were spotted in Nashville! pic.twitter.com/z2VQJlas14

After disappearing from the public eye for a while and reemerging a couple weeks ago as she announced her relationship with actor Joe Alwyn to People and was captured in blurry pap photos for the first time in four months, she appears to really be back. A couple days ago blurry pap photos came out of Taylor and Joe boarding her private jet.
Today we have brand new blurry pap photos of everyone's new favorite couple sitting on a balcony in Nashville together.

SOURCE
ONTD, how much do you love blurry Toe pics?

-Anderson is 50
-He was given a cake, a candle and a bunch of packets of his new favorite food, Mott's Applesauce
-Kelly Ripa & Andy Cohen called in as part of the surprise. Andy's and Kelly's son Michael's birthdays are the day before Anderson's. Kelly loves that there are so many Geminis in her life.
-Anderson decided to see what would happen when you put a balloon over open flame. It popped and blew out the candles.

Godney opened her first night on her short World Tour, in Tokyo. Below are some videos, and it looks like a pretty good show minus a slight hiccup...
...during "Slave 4 U" her mic sort of came off... but, being a Deity, her powerful vocals could still be heard through the giant arena. No harm done, obvz.
Check out the spearitual awakening show below!

[MORE VIDEOS - AND THE BLOOPER!]

Has your headset mic ever been snatched by your mask mid-song, ONTD?