- In Bill O'Reilly's 1998 novel 'Those Who Trespass: A Novel of Television and Murder', you read about a television journalist who gets fired from his comfy network gig, foreshadowing what may happen in real life

- Anthony Atamanuik does a great impersonation of Trump, starting @ 2:48
( Collapse )

-The new series debuts on Hulu on April 26th

-If you fell asleep or were high during English class in high school, Margaret Atwood's classic feminist dystopia The Handmaid's Tale imagines a future U.S. society that's been taken over by a right-wing theocracy (lbr this is actually the present now) and women are forbidden to read, cannot control money and everyone spies on each other. Pollution has also caused widespread infertility and a shrinking population, so "handmaids" are assigned to rich couples to be their surrogates and slaves.

-Star of the new Hulu series, Elisabeth Moss, had this to say: "For me, it's not a feminist story. It is a human story because women's rights are human rights...I never approach anything with any sort of political agenda. I approach it from a very human place."

What pop culture musical do you want to see ONTD?

.@netflix’s #13ReasonsWhy is the most tweeted about show of 2017 so far (EXCLUSIVE) https://t.co/Kcbclu7DjQ pic.twitter.com/cuuDKuaRKx

• more than 11 million tweets since its launch on Mar. 30.
• the Netflix series is trailed behind by “The Vampire Diaries” at No. 2 and “The Walking Dead” at No. 3.
• the most tweeted about characters are Hannah, Clay, Jeff, Alex and Justin.
• drastic growth for the cast members’ personal twitter accounts.
• Langford has also attracted a giant Instagram following with 2.9 million followers.

"So, I saw some pictures of myself. Really fat, on a boat. I have to tell you all I did was eat cheese. I ate cheese! So that's the news of the day. Not pregnant, just eating a lot of cheese, a lot of wine, a lot of pancakes.”
"Everybody's saying I'm pregnant and I'm not. I was just lactose intolerant apparently. Today no belly. I just had to share, because my whole family's calling me, asking me if I'm pregnant. Yes, I looked pregnant. But that was just a ball of cheese. Ball of cheese in my stomach. But seriously, I looked so fat but you know what, that happens to people. Everybody gets bloated. I’m not bloated today but this is pre-pancake. I’m about to go eat a pancake."

So cute! Chris Pratt brought his family to the Hollywood Walk of Fame today to help unveil his new star! https://t.co/6BGrxqfO8q

Chris Pratt received his star on the Hollywood Walk of Fame this afternoon! Star-Lord celebrated the honor with his wife, Anna Faris, who lived-tweeted the entire adventure.

Patton Oswalt pens a moving letter about being a widower and father https://t.co/eSXMPXl4c4

Comedian Patton Oswalt, whose wife, true crime writer Michelle McNamara, died suddenly last year, has been open and brutally honest about discussing his grief and sudden label as a widower and single father. On the one year anniversary of Michelle's death, he's written an open letter to fans about his and his daughter's well-being.

He states he's finally had the strength to remove his wedding ring and put it in a box with his and Michelle's other "happy stuff" and it was the final step of removing the denial of his new life. He and their daughter will not be visiting her grave unless they have news to tell her. He said he has made friends with other people who have suffered losses and called the year without his wife as "awful" but "not fatal."

You can read the entirety of Patton's letter on his Facebook page.

Continued well wishes to Patton, his daughter and family.

Earlier this week Rita attended the China Music Awards where she performed, dazzled on the red carpet, and received her award for being the most popular and influential international artist in China. Her sister Elena snapchatted a photo of it:

Travis Scott... the two The photographed and videod holding hands.

Do you make lateral moves?

Take a few minutes this #EarthDay to admire our breathtaking planet in all its glory through the eyes of @Astro_Jeff aboard space station. pic.twitter.com/axiUekmdly

NASA has been tweeting amazing stuff about Earth Day all day today - definitely check it out!

Are you marching ONTD? How are you celebrating Earth Day?

Which are you, ONTD? Club, legend, art, or theatre?

Ilie Nastase is the subject of an ITF investigation over a comment about Serena Williams' pregnancy: https://t.co/QjoMNcRb2H pic.twitter.com/lqh7dWEYDD

• Nastase was heard saying: "Let's see what colour it has. Chocolate with milk?"
An ITF statement issued in response read:
"The ITF does not tolerate discriminatory and offensive language and behaviour of any kind. We are aware of alleged comments made by Romanian captain Ilie Nastase and have begun an immediate investigation so that we have the full facts of the situation before taking further and appropriate action."

• The 70-year-old then jokily asked for GB captain Anne Keothavong's (who is married and 18 weeks pregnant) room number, and also said to her "We keep being attracted."

• To Eleanor Crooks (the Press Association's female reporter who was the sole English journalist present) he said : "Why did you write that? You're stupid, you're
stupid."

[spoiler (click to open)]Grammy award-winningproducer/songwriter Vincent Le'Carl Berry (Beyoncé's 'Sandcastle') posted some sneek peaks of Dinah & Ally working on Fifth Harmony next album on his snapchat story. Some music can be heard in the background.


so the guys who produced 'voicemail' & 'I lied' are working on their next album. they coming

This week for the first time since February of 1984, there weren't any women in Billboard's top ten as Clean Bandit's song "Rockabye" featuring Sean Paul and Anne-Marie dropped out of the top ten. Ed Sheeran's "Shape of You" has managed to hold on to the number one spot for yet another week.

"Fair use" is just an excuse @hotgirlswanted is using to out tons of sex workers for their shitty documentary.

ONTD, is your body ready for this movie? 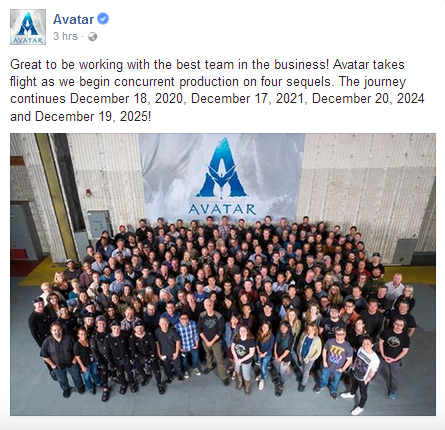 Were previously set for Decembers for 2018, 2019, 2021 and 2023, with were pushed because of production delays.
The first film, which still holds the record for the highest grossing film at nearly $2.8 billion, came out in 2009, and the first sequel will come out 11 years after it.

daniebb3 For the girls who never felt pretty enough or were made to feel less than because their beauty was unique, I was you once. One day you will realize your B•E•A•U•T•Y. Outer beauty is fleeting, but lasting beauty comes from within. Thank you @people for including me in your #MostBeautiful issue, specifically in the #nomakeup section. This one is especially for all the beautiful dark skin girls who are underrepresented. Majestic is our melanin. #electricmelanin On newsstands April 21.

DAMN has been on repeat.

ONTD, does your momma text you with emojis?

i just need al b. sure jr (s/o to arielazul-22) to blow up in some way so i can see his fine ass more often