Zedd partnered with the American Civil Liberties Union to throw the “Welcome!” fundraising concert at Staples Center in Los Angeles. The concert featured major artists, including Bebe Rexha, Mija, Daya, Tinashe, Halsey, Imagine Dragons, Machine Gun Kelly with Camila Cabello, Miguel, Skrillex, Incubus and, of course, Zedd himself. All benefits from the show went directly to the ACLU, which works to support equal rights across the country.
Below, you'll find Tinashe's set:

About: Based on a true story that shocked the nation in 1965, the film recounts one of the most shocking crimes ever committed against a single victim. Sylvia and Jennie Fae Likens, the two daughters of traveling carnival workers are left for an extended stay at the Indianapolis home of single mother Gertrude Baniszewski and her six children. Times are tough, and Gertrude's financial needs cause her to make this arrangement before realizing how the burden will push her unstable nature to a breaking point. What transpires in the next three months is both riveting and horrific.

About: The true story of the beautiful and charismatic but mentally unstable Barbara Daly, who married above her class to Brooks Baekeland, heir to the Bakelite plastics fortune. Their only child is a failure in his father's eyes, and as he matures and becomes increasingly close to his alienated mother, the seeds for tragedy are sown.

About: Based on the true story of Juliet Hulme and Pauline Parker, two close friends who share a love of fantasy and literature, who conspire to kill Pauline's mother when she tries to end the girls' intense and obsessive relationship.

About: Based on true events, Foxcatcher tells the dark and fascinating story of the unlikely and ultimately tragic relationship between an eccentric multi-millionaire and two champion wrestlers. When Olympic Gold Medal winning wrestler Mark Schultz (Channing Tatum) is invited by wealthy heir John du Pont (Steve Carell) to move on to the du Pont estate and help form a team to train for the 1988 Seoul Olympics at his new state-of-the-art training facility, Schultz jumps at the opportunity, hoping to focus on his training and finally step out of the poverty striken situation Olympic caliber athletes like he and his revered brother, Dave (Mark Ruffalo). Driven by hidden needs, du Pont sees backing Schultz's bid for Gold and the chance to "coach" a world-class wrestling team as an opportunity to gain the elusive respect of his peers and, more importantly, his disapproving mother (Vanessa Redgrave). Trapped in du Pont's majestic but suffocating world, Mark comes to see his benefactor as an egotistical, arrogant, and selfish megalomaniac and grows increasingly contemptuous. Though initially supportive, du Pont's mercurial personality turns and he begins to lure Mark into an unhealthy lifestyle that threatens to undermine his training. Soon du Pont's erratic behavior and threatening psychological game-play begin to erode the athlete's environment, stability, and motivation. Meanwhile du Pont becomes fixated on Dave, who exudes the confidence du Pont lacks. du Pont eventually realizes he is unable to buy the respect he so desperately desires from the world's greatest wrestlers. Fueled by du Pont's increasing paranoia and alienation from the brothers, the trio is propelled towards a tragedy no one could have foreseen.

About: Los Angeles, 1928. A single mother returns from work to find her nine-year-old son gone. She calls the LAPD to initiate a search. Five months later, a boy is found in Illinois who fits the description; he says he's her son. To fanfare and photos, the LAPD reunite mother and son, but she insists he's not her boy. The cops dismiss her as either a liar or hysterical. When she joins a minister in his public criticism of the police, they in turn use government power to silence and intimidate her. Meanwhile, a cop goes to a dilapidated ranch to find a Canadian lad who's without legal status; the youth tells a grisly tale. There's redress for murder; is there redress for abuse of power?

-They say his vocals take center stage and that the result is grand and memorable. They say it reminds them of Bowie of Hunky Dory. John Misty loved it too.
-They also point out it reminds them of glam rock ballads of days past.
-Critics are eating this up.

How grounding works and why it's so powerful. https://t.co/UYEMhXjEcn

-Sentient steamed vagina and noted medical researcher, Gwyneth Paltrow, has done what scientists have been working tirelessly to figure out - she has found the cure to depression and insomnia!
( Collapse )

How much longer do you think GOOP can stay up and operational while still peddling possibly harmful medical advice, ONTD?
Source 1 Source 2 Source 3 Gif 1 Gif 2 Gif 3

Abel and Selena have been spotted together constantly over the past few weeks, but this is the first time we've seen them express their affection for eachother in a public announcement of sorts. Any other PDA photos we've gotten were shot from a voyeur's point of view, so this is a nice switch to those who care!

Selena has posted The Weeknd on her Snapchat stories, and even posted a video of him on her Instagram (which has since been deleted).

Dimension 404 is a science-fiction anthology series streaming on Hulu. Similar to shows like the Twilight Zone and The Outer Limits, each episode is a different story with a twist. Narrated by Mark Hamill, there are currently 3 episodes available to watch, with the dates of 3 more TBA. 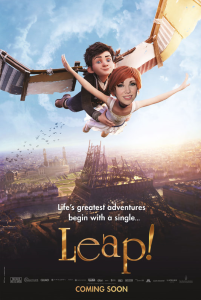 - Carly Rae Jepsen voices a character in the movie
- The movie, orginally called Ballerina, was released last fall in Europe and a handful of other countries (DVD is out in Europe)
- The Weinstein Company bought the rights, renamed the movie to Leap! (aww at that fragile male masculinity), hired Kate McKinnon to voice 3 characters
- Was supposed to be released later this month in the US, but has since been pushed back to Labour Day
- Carly contributed 2 orignal songs to the movie: Cut To The Feeling and Runaways
- Cut To The Feeling was originally a contender for E·MO·TION and E·MO·TION: Side B

( Collapse )
How long before Jay-Z stops lying to himself that Tidal is going to happen?

Jeremy Renner and Hannibal Buress are getting ready for a big game of Tag: https://t.co/s7uWPJ6Xxq pic.twitter.com/y0k4BVHBN2

"The film is based on a true story featured in the Wall Street Journal about a group of friends who have been playing a no-holds-barred version of the children’s game Tag for the last 30 years."

ONTD, when was the last time you played outside?

#TheSon Showrunner on 'Carefully' Depicting Race and War at the Turn of the Century https://t.co/m6le7Swo09 pic.twitter.com/O49KP9rju9

“The Son” follows generations of a prominent Texas family from the 19th century onwards, who are embroiled in various bitter wars over land, power and resources at the still-new U.S.-Mexico border. based on the bestselling novel by Philipp Meyer

Members of Comanche Nation were consultants, and the show’s Native American cast members were also involved in discussions about various storylines.

Showrunner Kevin Murphy :
“It’s cheap to hide behind the curtain of historical accuracy. Just because something actually happened a certain way, doesn’t mean it’s socially responsible to market it on television as mass entertainment, and I think we have to be very careful as a culture in how we approach it.”

Did anyone watch the premiere of AMC's "The Son" ?

Why he's annoying: Ricky loves to tweet constantly about his atheism, his right to offend people, and his awful bathtub selfies that stopped being funny years ago (were they ever really funny?). He also loves retweeting literally any and every article that ever praised anything he's ever done.
Positives: He's an animal rights advocate and has a cute cat.
Examples of Tweets:

I wish I had a pound for every time I offended someone. Wait, I do.

Synopsis from the link: [Spoiler (click to open)]' A discovery pushes Naomi and Holden apart and sets the Roci crew against each other.'


The 'Inside the Expanse' wasn't posted yet. The Expanse airs Wednesdays at 10/9C on the SyFy channel.

I'm not ready to say goodbye 😢

Baby was born 2 weeks ago. Gender and name hasn't been revealed.

-Busy Philipps and her husband got into an Uber Saturday night, but became alarmed when there was a mysterious passenger in the back seat of the car as well
-Philipps says she began yelling at the driver and the passenger, screaming "I will not be killed today!"
-Philipps told the driver that they were parents and the driver responded: "They’re parents, we shouldn’t kill them.’

Have you had a scary Uber/Lyft experience ontd?

ID's special on the murder of Caylee Anthony aired part one of the documentary tonight.

Although she was found not guilty, many believe Casey did it. Many have speculated and theorized how the 2-year old was murdered. Here are a couple of them:

thoughts? anyone watch this?

Pictured above: Rila Fukushima, face model for the geisha bots for the movie Ghost in a Shell

She asks the questions no one else will. She lets her guests say what's really on their mind. And if you disagree with her, well, she doesn't give a #$!%. Chelsea Handler's back with big adventures, bigger guests, and boundary-pushing conversations. A brand new season of Chelsea streams Fridays on Netflix, starting April 14th.