so sorry about that mods

The money was donated to Planned Parenthood.

What would you ask Emma?

“Stranger Things” star David Harbour is being eyed to play Cable in 20th Century Fox’s “Deadpool 2,” an individual with knowledge of the situation tells TheWrap.

The source also said Fox has screen-tested the actor, who plays Chief Jim Hopper on the Netflix phenomenon, to play the time traveling mutant in the upcoming sequel to the hit film.

In the Marvel comics, “Cable” is the alter ego of Nathan Summers, son of X-Men mainstay Scott Summers, a.k.a. Cyclops. The character traveled to the present day from a possible future timeline.

Please heavenly father I have been good all year I deserve this and yea, let him punch all the things amen

''Set during the last days of the Ottoman Empire, The Promise follows a love triangle between Michael, a brilliant medical student, the beautiful and sophisticated Ana, and Chris - a renowned American journalist based in Paris. Starring Christian Bale, Oscar Isaac, and Angela Sarafyan!'' 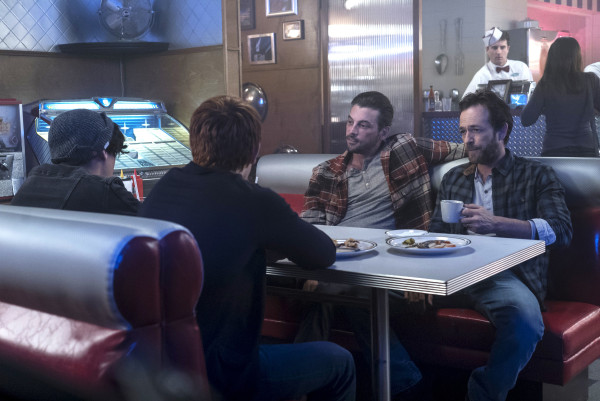 When Jason's car gets set on fire, destroying all the evidence, new rumors begin to swirl as to who was really behind his murder. Tensions build when FP Jones/Jughead's Dad (Skeet Ulrich) comes back into the picture, and it’s revealed that he and Fred (Luke Perry) have some unresolved (non-sexual) issues between them.

Meanwhile, Veronica takes matters into her own hands after a fight with her mother about forging her signature on legal documents. And Cheryl approaches Betty with an unexpected proposal (that's probably about Polly) that leaves Betty torn.

Directed by Allison Anders and written by Aaron Allen

Rest of the pictures at the SOURCE
what other 80s/90s star should show up as a parent in this series?
it's also the episode where they go clubbing

Camila Cabello is currently in the studio with Pharrell Williams and Tyler the Creator. CC1 IS GOING TO BE 🔥 😱 pic.twitter.com/5Kbp1Q9y0g

- karla is currently busy in the studio with pharrell and tyler the creator
- karla previously posted a pic of a session with producer frank dukes - one of the co-producers of lorde's eagerly anticipated sophomore album, melodrama
- karla's solo debut is due out in the fall
- meanwhile fifth harmony are busy singing along to karla's backtrack

are you ready for karlageddon??

She was on Wendy today, dressed for a funeral, and talked about the diss track Shether and their feud etc etc.


- Says Nicki started it by her behhind the scenes antics, and her track was a response
- Feud is about Nicki trying to keep Remy from winning certan awards or attending red carpets by threatening to not show up if Remy does etc.
- Nicki tried to get people to write bad reviews on Remy's albums/sales
- Nicki is 'not a nice person'

+ Debut album will be released May 12

+ Despite 3/4 of the members being from No Doubt, this is NOT a No Doubt reincarnation (and really, listening to the music, it couldn't be mistaken as such either)

+ They are playing Coachella, and have announced some tour dates:

Follow-up to this post, when the project was first announced and everyone was upset lol

omg I'm in LOVE with this. Davey's voice is so well suited for this new wave sound.

source
Listen to all the songs HERE

Listening party! Which song is your favorite?

Jennifer Lopez talks about her NBC show, Las Vegas residency, her mom, children, and ex Marc Anthony
Jennifer Beals talks about her new show Taken
Have you ever wanted to change careers? Whoopi talks about wanting to be a US ambassador.
Do you need to be religious to be godparents?

This episode was heartbreaking

Rita Ora's Phones fell While She was Leaving Her Car!😱😱Sis, Hopefully the damage isnt big!😘😘💚💜 pic.twitter.com/zNFAlMPaTQ

While exiting a car and holding a dog, Rita managed to drop both of her phones. Only one phone looks like it needs repairs.

She also told a fan that her highly anticipated album is really on its way and she's releasing new music next month.

@RitaOra Confirmed to @AnaBiebsmiler That Her New Music Is Coming In APRIL!🎉🎉🎉🎉🎤🎵🎶🎤🎤🎶🎵🎤🔥🔥🔥 pic.twitter.com/yr8CsxscjA

Eme Ikwuakor is Gorgon, Black Bolt's cousin and the leader of the Attilan army. He has hooves and can generate seismic waves. Isabelle Cornish is Crystal, Medusa's sister, and she controls the elements. Mike Moh is Tritan, and he can live underwater. Sonya Balmores is Auran, head of the Royal Guards. Ellen Woglom is a mystery character. And Lockjaw, Crystal's 2,000 pound teleporting dog is also appearing.

IMG represents some of the biggest names in modeling, like Gisele Bundchen, Candice Swanepoel, Kate Moss and Gemma Ward, as well as nepotism faves like Hailey Baldwin and Gigi Hadid
( Collapse )
source 2

Will the nepotism bubble burst, ONTD? Who's your nepotism fave? Is it Ivanka?

Joy-Anna, 19, just got engaged to her boyfriend of 4 months, Austin Forsyth. He's a longtime friend of the family and flips houses. His family owns a Western themed camp for couples retreats. She's the second to last of the older girls to be engaged, leaving poor Jana to take care of the kids all by herself.

Lmao at Tidal talking about making history and changing music when their service is at ... 1%

The main characters attend a concert where a song inspired couples in attendance to start kissing - multiple same sex couples are pictured. After the clip ends, two lesbian couples are also seen kissing (the picture is on EW)

source
Thank you @trinegrimm for my warrior's chest plate/tit chandelier. This is my first original piece by a female tattoo artist and it felt sacred and cool and she didn't chide me for copying @badgalriri's placement. If you're ever in Oslo, go meet this metal queen and let her handle your body 🌖

-Ellen makes Emma look for a nanny for herself
Beauty and the Beast is currently at 74% on rotten tomatoes and critics consensus so far is:
With an enchanting cast, beautifully crafted songs, and a painterly eye for detail, Beauty and the Beast offers a faithful yet fresh retelling that honors its beloved source material.

Jinn is a coming of age story about, a 17 year old carefree black girl named Summer whose world is turned upside down when her mother Jade (Missick) abruptly converts to Islam and becomes a different person which prompts Summer to reevaluate her own life and identity.

The film is loosely based on the filmmaker’s Black and half-Islamic upbringing and serves as a timely, fresh look at identity, Islam, and first love in contemporary Los Angeles.

The actions will be another level from XXXThereturnofxandercage, that I promise!👌😉 https://t.co/SNNtqtSdw7

-Donnie set to star in new Neal Moritz (Fast & Furious franchise) film 'Sleeping Dogs', based on the video game.
-Follows an undercover police officer on a mission to take down the Triads.
-Set in Hong Kong, features lots of martial arts, racing and boat chases etc according to Deadline.

Why wasn't Natalie Portman at the Oscars? She was with her four-day-old baby girl. https://t.co/GpYVmEEhFT pic.twitter.com/k6ixscowRk

8:00 is a retrospective special, and the series finale will air at 9.

How do you want the series to end? And how do you think it will end?

After a horrible performance of "Moth into Flame" that can only be described as a Napster set up, today, Gaga uploaded the rehersal video which went completely problem free.

So go a head and click on the video and judge by yourselves.

Here's a LINK for the people outside the USA.

Alabama theater will not show "Beauty and the Beast" because of gay story line https://t.co/PsWRSQ4Mqr pic.twitter.com/ceMISAjGDz

- Apparently LeFou (played by Josh Gad) worships Gaston cause he's attracted to him and comes to terms with that throughout the film.
- Henagar Drive-In won't show the movie cause they say they're sick of corporations pushing the gay agenda and the bible. (apparently ONTD reads now... so ETA, they say the bible is all about being no homo)
- They got new ownership recently and are going through the schedule and getting rid of previously scheduled movies - they have yet to get rid of the documentary "Fierce" on their schedule which is about the drag community fighting for equal rights

-Amy Jo Johnson (OG Pink Ranger, Kimberly Hart) surprises 3 of the new Power Rangers actors during an interview
-She asks them if they think the film will have a similar impact on kids/og fans as the original did
-Asks about their characters now having powers outside of being morphed
-Is still looking young as she did back in the 90s

Patricia Bosworth starred with Audrey Hepburn and Peter Finch in a "A Nun's Story."

Bosworth's describes in her memoirs, The Men in My Life: A Memoir of Love and Art.

“I knew that having an abortion would be a difficult experience," Bosworth, now 83, told NPR in an interview. "I didn't realize how difficult both physiologically and psychologically."

On very day she won the role, Bosworth found out she was pregnant.

Afraid she would lose the part, Bosworth went to an illegal abortionist and paid him $500 to terminate her unborn child.

-Rebecca Ferguson, Simon Pegg, and Jeremy Renner are also expected to return, though it’s unknown in what capacity.