You called it first, she delivered six months later. Kylie's kylighters will be launched on 28th on her website.
( Collapse )


Did you watch the movie? Let's post some gems! lmfao

About: Two young men, Ennis Del Mar and Jack Twist, meet when they get a job as sheep herders on Brokeback Mountain. They are at first strangers, then they become friends. Throughout the weeks, they grow closer as they learn more about each other. One night, after some heavy drinking, they find a deeper connection. They then indulge in a blissful romance for the rest of the summer. Unable to deal with their feelings for each other, they part ways at the end of the summer. Four years go by, and they each settle down, Ennis in Wyoming with his wife and two girls, and Jack in Texas with his wife and son. Still longing for each other, they meet back up, and are faced with the fact that they need each other. They undeniably need each other, and unsure of what to do, they start a series of "fishing trips", in order to spend time together. The relationship struggles on for years until tragedy strikes.

-Harry, I think it's safe to say, give JLo your number


source
Who is your celebrity crush, ONTD?

After this year's BRIT awards Sony Music pasted across their website and social media headlines like "Sony Music dominates Brit awards with record making success". But look a little closer and it's no mystery why over two-thirds of acts who took home awards were Sony Music artists.
The new chairperson of the BRIT Awards, who oversaw such record breaking success for Sony Music? None other than Chairman and CEO of Sony Music UK and Ireland, Jason Iley.

Sony artists won 9 out of a possible 13 BRIT Awards for this year. For British acts, Best British Album and Best Male Solo Artist went to the late David Bowie, BRIT critics choice and British Breakthrough act went to Rag’N’Bone, BRIT Icon for Robbie Williams, British Single win for Little Mix, and One Direction won British Artist Video Of The Year. British Global success went to Adele again, though she is under Sony Music in the US not the UK.

To @MichaelaCoel prevented a potentially horrific situation. You are a super hero.

IF SHES DRUNK OR HIGH OR DOESNT SAY YES, THAT MEANS NO

Brave & drunk so we stole this barefoot lady from two male strangers who were leading her "somewhere". They slipped away pretty quick (1/2) pic.twitter.com/tOxwg3dsmC

He died from complications from heart surgery and suffered a fatal stroke.

"It is with heavy hearts we share the news that Bill Paxton has passed away due to complications from surgery." The family accurately describes his "illustrious career spanning four decades as a beloved and prolific actor and flimmaker." The family adds, "Bill's passion for the arts was felt by all who knew him, and his warmth and tireless energy were undeniable."

Shia LaBeouf’s anti-Trump live stream installation has been shut down after reports of gunshots. https://t.co/IJPA1SFvlY pic.twitter.com/Gv5aAHhfDM

Is this the end for He Will Not Divide Us?

Loreen has decided to come back for her Eurovision crown with Statements. Sweden has a crazy procedure to pick the song they send and she placed 3rd/4th in her semi final which means she will perform again in a second chance stage where 4 more songs advance to the final. Will Sweden sleep on this legend?

how the hell did she not qualify for the final directly???? thank god there is a second chance round because this is already my winner lmao

ontd, what's your favourite eurovision song of all time? mine is euphoria 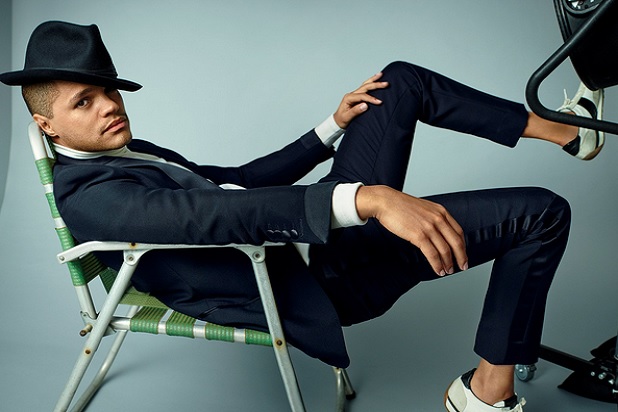 The man's doing some promotion for his book and new comedy special on Netflix: Afraid of the Dark. He also points out that Dutch people should start acknowledging the impact the Dutch had on South/Southern Africa.


Favourite book: The Wonderful Story of Henry Sugar and Six More - Roahld Dahl. "I like the story because it's about a boy that learns something new and with it achieves more than he could ever dream of. Books weren't necessary a way of escapism for me, but a way to travel to places and times I couldn't visit myself."

Favourite language: all of them. Trevor knows how to speak English, Afrikaans, Zulu, Tswana, Tsonga, Xhosa and German.
"I like to spend my holidays in countries where I can learn a new language, like Spanish in Peru or Hindi in India." He doesn't know in which language he dreams.

Favourite comedian: Eddie Murphy. "He has it all: acting, accents, jokes. Coming to America is my favourite work of his."

Favourite food: Indian. "Everything that has paneer in it."

What are a few of your favourite things on Sunday, ONTD?

The next Doctor Who 'should be black or female'

With @DavidHarewood saying next Doctor Who should be black/female, YouGov finds Brits care less about having a white/male Doctor than before pic.twitter.com/sgs6tFkIrV

Patrick Stewart's decision to bow out of X-Men with Jackman warmed my heart. They've made my favorite characters come to life since 2000. pic.twitter.com/oDdh5O5MGx


Anyone told James McAvoy yet? End of an era tbh

The ad uses the Andy Quin song Awakening, which Malik used in the trailer for To the Wonder.

LOL this is super hilarious given all the reviews calling To the Wonder a glorified perfume ad.

The Oscars show the best in film, but music does not go unnoticed at the event. Here are the top 12 5 music performances at the Academy Awards:

Source 1 and 2
Post has it the max. Part two is here

For the four of you watching lol

.@ChanceTheRapper buys out entire theater to offer free 'Get Out' screening https://t.co/g9a8z8qgOZ

What an awesome gesture. This movie is doing numbers. Completely deserving.
Embed from Getty Images

Source 1 and 2
Will update as people arrive. You can view part one here

-Adam Levine has never heard What Do You Want From Me and thought the person on The Voice singing it, sang it 'probably' better than the original singer, Adam Lambert hasn't sad anything bad about him but he did agree this was major shade (ngl maybe Adam Levine actually never heard the song lmao)
-He was supposed to tour with Demi but didn't
-Adam Lambert said that Susan Boyle's single 'Wild Horses' made him laugh when he was asked about her album once, and Per** Hilton told him he was jealous because Susan's single outsold his
-Gene Simmons said that Adam should have never came out and that it ruined his career, but then asked him to perform with KISS lmao
-He didn't date Sam Smith

Promotional pictures at the link, the synopsis: [Spoiler (click to open)]'Earth and Mars search for answers in the aftermath of the asteroid collision.'

More goodies behind a cut, there are spoilers for 2X05, be warned.

Ratings went up to 0.2, hope it stays there or even inches back up to 0.3. Are you all ready for the return of Martian Queen Bobbie Draper?

[Spoiler (click to open)]Bobbie's getting ready to slay you all.

It's the viewing post for the 89th Academy Awards!

The show is currently airing on ABC.

I'll try to keep an up to date winners list here -

Documentary (Feature)
Fire at Sea
I Am Not Your Negro
Life, Animated
O.J.: Made In America
13th

For quick screencaps and gifs please refer to Tumblr!

Hannah interviews a respected author, who gives her advice on writing and being a woman. Meanwhile, Adam abruptly leaves the set of his latest acting job, so Jessa thinks they should embark on a creative endeavor of their own; Ray is shocked by the sudden death of a regular customer at the coffee shop; and Marnie is confronted with her narcissism. (airs March 5, 2017)

It's the viewing post for the 89th Academy Awards!

The show is currently airing on ABC.

I'll try to keep an up to date winners list here -

Documentary (Feature)
Fire at Sea
I Am Not Your Negro
Life, Animated
O.J.: Made In America
13th

For quick screencaps and gifs please refer to Tumblr!

You can find part one here.

- Tr*mp will be the first president to skip the dinner since Ronald Reagan in 1981. However Reagan was recovering from an assassination attempt; sadly, Tr*mp is not but is being a massive chickenshit instead.

- This had fans and celebrities calling for Alec Baldwin to take his place.

.@AlecBaldwin time to suit up. https://t.co/DfVnzAYxSG

- Warren Beatty said he saw "Emma Stone - Best Actress"
- Cast of La La Land made a couple speeches before they were stopped and told they did not win
- Technically Faye announced that La La Land won after Warren showed her the card, confused
- Moonlight actually won Best Picture