- Perfomed I Don't Wanna Live Forever and Better Man live for the first time
-  Allegedly said: "As far as I know I'm only doing one show in 2017, and as far as I know this is my one show"

Captain Jack Sparrow searches for the trident of Poseidon.

- she deleted the picture from instagram but the tweet is still up
- full caption of her post was: #happysuperbowlsunday #lol #reality #ignoranceisbliss go ahead and stay distracted, that's what they need

Okay this is WILD. pic.twitter.com/0HpVnsOdv3

LA Dark Pop band MUNA has released their debut album, "About U," along with a moving music video for their single, "I Know A Place."

Their sparkling synth-pop soundtracks a story of inclusivity and warmth in the face of an industrial landscape and police in riot gear. Watch the video and stream their debut album in full at Stereogum.

In the shitstorm that was 2016, this band actually helped me cope with some pretty traumatic stuff. Any other entirely un-problematic faves that you recommend, ONTD?

Hours after her epic performance at the Super Bowl, Lady Gaga announced a new new world tour in support of her latest album Joanne. The concert tour, named simply "Joanne World Tour," will begin this summer in North America. Check out the tour dates below and click here for ticket info!

Presale begins 8th-20th depending on which show you're attending. Get ya coins ready!

Melissa McCarthy Takes On Press Sec. Spicer In SNL
They talk about the halftime show with Lady Gaga
View Your Deal segment with Sarah Michelle Gellar
Sara Haines at the Super Bowl

113.7 million viewers tuned in last night to catch a performance from Lady Gaga.

Viewers also witnessed the historic first of a Super Bowl game going into overtime when the Patriots won.

This is up from 2012, when only 111.3 million viewers tuned in to watch Madonna perform.

The official press release for season three has also confirmed that Sean Baek will be returning as Fancy Lee this season in what appears to be a bigger capacity than he has been in seasons one and two.

Source 1 and 2
Love it! Fingers crossed that a surprise Delle Seyah ends up popping up as well. Give seasons one and two a watch if you haven't. They're a quick binge and a great watch!

While the live broadcast made it look to people watching on TV as if she jumped off the roof, it has been revealed it was pre recorded

Kanye West has deleted all of his tweets defending his meeting with President Trump https://t.co/RV4UFBZbW6 pic.twitter.com/YgameqN1SR

It looks like the recent alliance between the two most egocentric celebrities in America might be over. Kanye deleted all of the tweets he made in December defending his meeting with Trump.

This is happening after Kanye was reportedly not asked to perform at the inauguration despite likely being the most A-list performer available to them because they wanted the inauguration to be "Traditionally American".

CNN also noted that one of the artists recently signed to Kanye's label just released a song calling for Trump's impeachment and it was produced by Kanye. 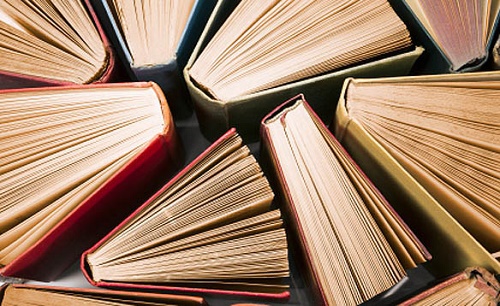 I am an old woman yelling at cloud, and I think Youtubers are generally terrible - it takes quite a bit of digging to find someone who isn't a pathological narcissist, a racist, clickbait trash, or makes annoying faces on the still. With book youtubers ("booktubers"), most of them read YA pretty exclusively - always the same books, once you've seen a video you've literally seen them all - and act unnaturally chipper, which really annoys me.

HOWEVER there are some booktubers who are alright, who are smart and don't act like maniacs on camera, and who actually read interesting books. If you prefer to watch videos rather than read articles recommending books, then you can get good recs from these people. They aren't the flashiest, or the ones with the most subscriptions, sometimes they don't even have very good production values, BUT the content is good. And when it comes to books, that is all that really matters.

So here are 5 booktubers who aren't as terrible as the others.


She is playing Kathleen Blanco, and joins Courtney B. Vance, Sarah Paulson and Cuba Gooding Jr., who were already cast.

-According to the police report, accident happened on family property (not a hunting trip), within view of Spears and her husband
-Maddie was avoiding a ditch and overcorrected, going into the pond
-Was trapped underwater by seatbelt & ATV safety netting
-In "stable but critical condition"

this is so horrifying :( hope she pulls through

* She had another baby boy
* They haven't released his name yet
* Joins older brother, Spurgeon

tweet source / read the full statement at the source (people)

ONTD, what ugly christian name do you think they gave him?

Shakira keeps succeeding without leaving her house. Her hit Chantaje reached 600M views on Youtube just a couple of days ago, and Shakira's team celebrated the song's popularity by releasing a salsa version with a video featuring more dancing scenes between Shakira and a Colombian reggaetonero that also sings in the track.

( Collapse )
Sources: 1, 2, 3
She needs to stop (non) promoting Chantaje and move on to (non) promote her songs with Nicky Jam and Prince Royce, I guess.

.@MichelleBranch is a "Hopeless Romantic" on her new track (exclusive) https://t.co/xqYJSldWsi pic.twitter.com/gZyRzVP9In

The song was produced by Patrick Carney of The Black Keys. Full album titled 'Hopeless Romantic' will be released on April 7th.

PICTURE EXCLUSIVE: Alicia Vikander springs into action with a series of slick stunts as she's seen for the first… https://t.co/JKQ3hLLy0q

She is taking on the role made famous by Angelina Jolie in the 2001 action film series Tomb Raider.

More pics at the source

This is so/so. I personally like VÉRITÉ, but I'm not crazy about her in this.

How to Get Away with Murder 3x12 "Go Cry Somewhere Else" - Tensions in the courtroom run high, as the prosecution seeks to bring forth a new charge against Annalise. Meanwhile, Nate uncovers a crucial piece of information that could threaten his own innocence, as detectives call Oliver in for questioning on “How to Get Away with Murder,” Thursday, February 9th on ABC.

this promo's ending. don't give me false hope, show.
Source


Gonna try sum up this interview as best as I can. *rolls up sleeves*

- Dave says that we are living in a time of real change. His daughter cried and sobbed at the results of the last US election.

- Martin and Dave are both very alarmed at the state of the world especially since both of them live in America.

- This album is more political than their last few. In one of the new songs called "Backwards", Dave sings of bigots "turning back our history" along with their latest single "Where's the Revolution".

- Dave sobbed and cried when Bowie died and his wife and daughter both had to hug him. Depeche Mode then recorded a special concert at New York City's High Line public park, where they paid tribute to Bowie by singing Heroes. They have yet to release this concert to the public which was recorded without an audience.

New year, new music.
Right now Sean Michael Anderson latest album is set to debut with big numbers.
As much as I loooove me los Migos, I'm not mad at Sean 'cause I Decided is proper 🔥fuego🔥
Don't believe me? You can stream his latest release over at Spotify, Apple, or treading water streaming service

Oh! and I guess Jay-Z gave Sean his own chain over the weekend.

Have you listened to I Decided, ONTD?

Please feel free to post your reaction to the flow change in Voices In My Head/Stick To The Plan below.
Here's mine:[Spoiler (click to open)]

Also, can someone explain to me why the hell Eminem sounds like E40 on No Favors? (Trash feature, btw. *Delete*)
Inspire me & Bigger Than Me are really beautiful songs, imo 🙂

"We created a vibe not even money can buy" 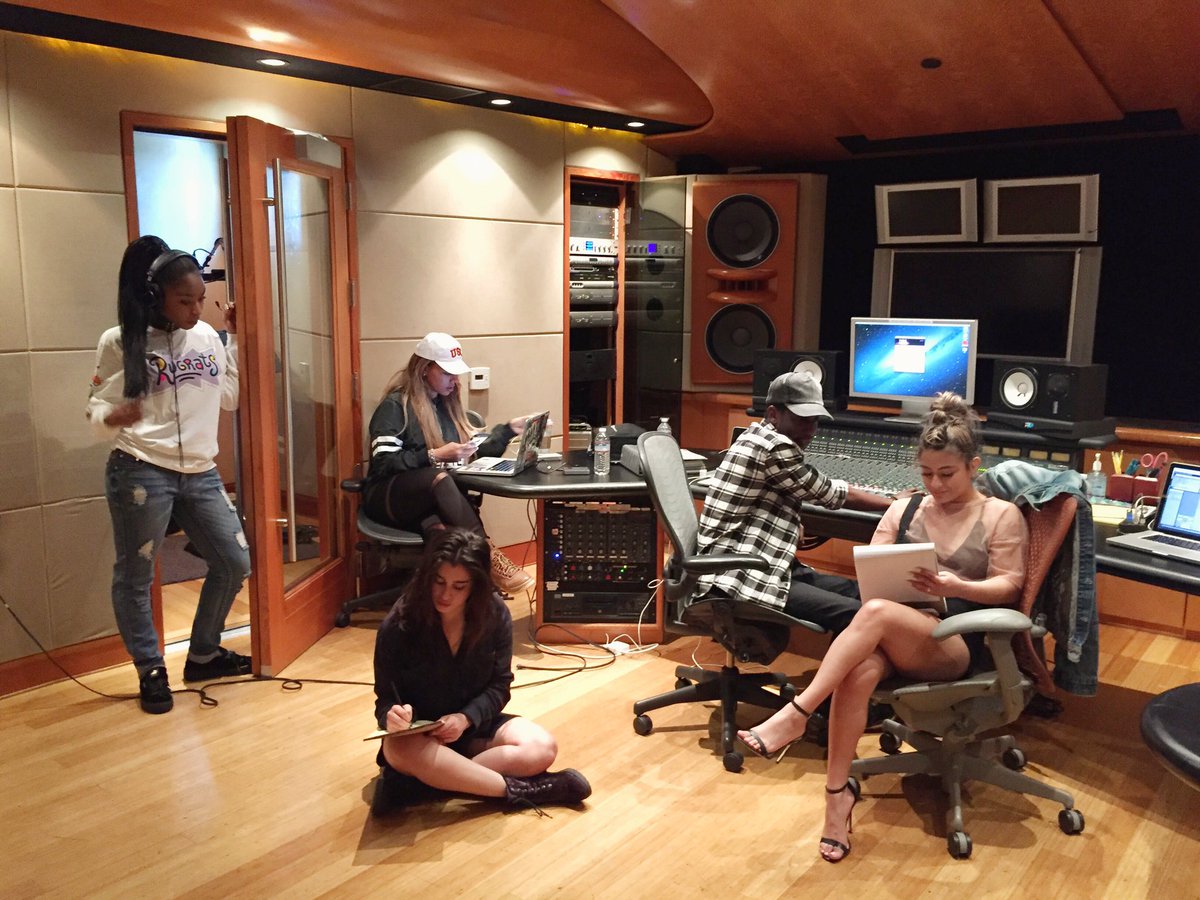 Billboard revealed a few weeks ago that the girls re-negotiated their contract with Epic to have more "creative involvement" with their music.
The 5H girls have been spending all their days in the last few weeks writing and recording songs at the studio. They've been seen working with producers such as Grammy nominated Akil King (Beyoncé's "Lemonade"), Sebeastion Kole (Alessia Cara' "Here", Jennifer Lopez' "Goin' In"), Grammy nominated Verse Simmonds (Rihanna's "Man Down", Jay-Z & Kanye West "Who Gon Stop Me") and Dreamlab (Selena Gomez' "Good for You"). 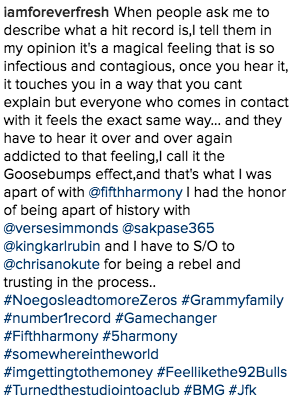 yall better get your coins ready, the girls are cooking us the album of the year!