Carson Kressley was on WWHL and he dished that some conversations might be going on to bring back Queer Eye for a new season.

NBC's The Good Place had a one-hour season finale tonight and turned everything on its head. As of now the show has not been picked up for season 2.

Finale discussion post! This is honestly one of he best new shows to debut in 2016. I will lose all faith in TV if it's not picked up for a second season.

Love this man right here, through any and all. He has grown into a great man. He's got God and me behind him, he cannot fail he cannot fall pic.twitter.com/o0szrB5dBk

Ariana Grande comes to Final Fantasy Brave Exvius for a limited time, which Square Enix is, evidently, very happy about.

People noticed that crowds were a lot smaller for Trump's inaugural concert than Obama's https://t.co/vPOF6oSGj3 pic.twitter.com/5oPvwvLU5O

Source
Lisa is a family friend. She's a fucking nut, she's perfect for this show.

Her internship starts in Feburary. She can add this to her resume alongside her internship on Lena Dunham's Girls.

She will attend Harvard in the fall. 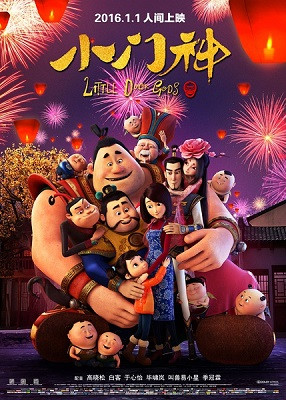 And in today's episode of Let's Cast More White People in POC Roles:


The Chinese animated film Little Door Gods is receiving the Weinstein treatment. Retitled The Guardian Brothers, the movie focuses on two door guardian brothers as they deal with a fading
Spirit world due to people no longer believing in it. One of the brothers seek employment in the human world (possibly) at a generations old wonton soup shop run by a mother, Kidman, and daughter, Zendaya Bella Thorne, duo.

Meryl Streep narrates. It is unclear if she, or the white actors portraying Chinese characters in the movie will have an accent.

Zendaya was originally tapped to voice the daughter but dropped out of the project. She was replaced with her Shake it Out castmate, Thorne.

Randall Park, Fresh off the Boat, apparently is attached to the project. I guess AN Asian, despite being a different ethnicity, is better than none at all for this Chinese project.

Mods, I fixed the source. First post, sorry about any formatting errors!

ABC is working with series creator/executive producer Kenya Barris on the project, which would be toplined by Black-ish co-star Yara Shahidi and focus on her character Zoey Johnson in college.

The 'A Dog's Purpose' premiere has been cancelled after a video showing alleged animal abuse was published: https://t.co/KsUTVBDN1D pic.twitter.com/FBSEZA1fzN

The movie opesn nationwide on Jan. 27 as scheduled but the premiere and press junket have been cancelled.

The director, Lasse Hallstrom, also spoke about it

for both myself and everyone on the set. I have been a lifelong animal lover and A DOG’S PURPOSE is my third film about dogs.

The new Austra record "Future Politics" was written in response to the collective depression felt around the world. The purpose was to shift our focus from present day doom to a new hopeful future and its possibilities. It is available for free or pay-what-you-can on this Cheeto day via Bandcamp. All proceeds go to Planned Parenthood.

Our record is available free for release day. Here's why. Find it at https://t.co/nOcVAj2VfV #IStandWithPP pic.twitter.com/n4OxvdqnSi

Source.
Obsessed! This release is the only event that matters today.

-Mark Zuckerberg is trying to force hundreds of Hawaii families to leave their ancestral lands
-In an attempt to make his 100 million dollar & 700 acre beachfront compound more private, facebook billionaire Mark Zuckerberg is seeking out and suing several hundred native Hawaiians who have claim to parts of his land
-There are parcels of land on and near his property that are occupied via "Kuleana Act" law. The plots are divided into smaller portions and passed down through native families over generations
-Zuckerberg has filed "quiet and title actions" against several hundred Native Hawaiian people in order to identify the current legal owners and force a sale of the plots of land
-Due to the United State's annexation and overthrow of the sovereign Kingdom of Hawaii, it is not unusual for large portions of land sales in Hawaii to contain plots with unclear ownership
-Locals criticized the Zuck earlier this year for building a wall that obstructs the view and limits local beach access enjoyed by neighbors for decades. Zuckerberg has criticized Trump's talk of building a border wall.

Now without banned sources. What a cool and great guy

Sterling K. Brown is in negotiations to join the cast of The Predator, Twentieth Century Fox’s reboot of the sci-fi action franchise that will be directed by Shane Black.

If a deal is sealed, Brown will play a government agent who jails Holbrook’s ex-Marine character, but later needs his help with the Predators.

Boyd Holbrook is leading what is described as an ensemble cast that includes Moonlight breakout Trevante Rhodes, Keegan-Michael Key and Olivia Munn.

Rhodes and Key will play ex-Marines, while Munn is a scientist.

"The star of 'The Big Bang Theory' and the new movie 'Rings' invites Stephen over to help him sort laundry. Stephen would love to help, but he thinks all the whites will be at the inauguration."

Jackie Evancho now 16, sings the national anthem
at the inauguration of the 45th president of The United States
on January 20th 2017.

At the age of ten, in 2010, she gained wide notice with her 2nd-place finish in the fifth season of America's Got Talent.

Premieres May 30 on Netflix


She still lives in Mumbai.
Has done about 50 movies and considers herself a workaholic.
Says Indian weddings>>>>>American ones.
Has not seen Manchester by the Sea.
( Collapse )
Sources:1, 2, 3

ontd, are you a workaholic? Do you have a dream job?

The Walking Dead's Lennie James has written and stars in a brand new drama for Sky Atlantic https://t.co/q4Tfaq2Cl7 pic.twitter.com/jotoBN3U0n

As well as creating and writing the show, James will also be playing the lead role of Nelly Rowe, a man whose days are fuelled with drink and who likes fighting, lying and sleeping with whoever takes his fancy at the time.

But when he is accused of a terrible crime, he embarks on a mission to discover the real perpetrator and also make up for his mistakes in the past – namely with Claire (Suranne Jones) who he had a romance with 13 years ago.

History is staying in business with Travis Fimmel,

Fimmel is teaming up with the network to develop a scripted anthology series that tells the stories of Wyatt Earp and other iconic sinners and anti-heroes throughout history.

Fimmel wrote the first episode and will executive produce and star as Wyatt Earp.

The series’ first installment will focus on Earp, from his days in Dodge City and his relationships with Doc Holliday and Bat Masterson, to the real story of what happened during the legendary gunfight at the OK Corral.

- Pilot written by Vampire Diaries showrunner Caroline Dries
- Silvestri and Matt Hawkins will also exec produce.
- Will be based on Silvestris iconic run on the Top Cow title
- Yancy Butler starred in the original tv series that ran for 2 seasons on TNT in 2001.

Who do you want to see cast as Sara Pezzini?

- James said that his agent had been telling him for ages to go to LA to shmooze the scene so he could get cast in movies but could never be bothered to do it.
- On his new movie Split, James plays a character with dissociative identity disorder and a total of 23 alternate personalities.
- James and the movie are getting great reviews.

How many times have you been burned by M Night Shyamalan, ONTD?

-The housemates are placed into 2 groups, Heroes and villains
-The heroes and villains are paired up and and seperated into their respective groups
-Nominations were set where each pair had to decide to trust each other, or one could betray the other and put them up for nomination
-Stacy feels judged by the housemates for making her decision and lashes out

''Based on David Grann's best-selling book of the same name, The Lost City of Z is the true-life drama which centers on British explorer Col. Percival Fawcett, who disappeared while searching for a mysterious city in the Amazon in the 1920s.''

Here's which #TheFlash and #Supergirl stars will be singing in the musical crossover. https://t.co/6wySGgDvhJ

The vast majority of the action will take place during The Flash‘s March 21 episode titled “Duet,”.

The crossover villain will be the Music Meister, who has the power to control people through song.

Native American actress Sara Tomko (The Son) has been tapped to play Tiger Lily, the princess of the “Piccaninny tribe,”(they deleted it @ the source) for at least two episodes.

The "Side to Side" singer just beat Victoria Justice at her own doppelgänger game! Meet Jacky Vasquez!

"I honestly never thought I looked like Ariana." sure Jan

Source , Jacky's IG
Damn... Have you ever met your lookalike, ONTD?