Joan Carroll Clayton Tracee Ellis Ross is now the first black woman to win this category since Debbie Allen in 1982.

Source 1 and 2
Will update as they come in

While Ryan Gosling was walking to the stage to receive his award for Best Leading Actor in a Comedy or a Musical for "LaLaLand", Ryan Reynolds (who was also nominated for "Deadpool") kissed Andrew Garfield (who was nominated for Hacksaw Ridge). Living proof that this mofo is Deadpool irl.

source: this girl, her tv, her phone and twitter.

ONTD, do you wanna be kissed by Ryan Reynolds?

And none for Birth of a nation, bye.

Source
As with the others I'll update

In which he explains how much the people of South Sudan love him thanks to his role.
Cringleston accepts his award for Best Actor in a Limited Series in 'The Night Manager'.

"All the walls have broken down at Archie but the integrity of the characters stays the same." - CEO/Publisher Jon Goldwater on #Riverdale pic.twitter.com/M4jZE7wfvU

Reggie, Moose, Jason,Tina,Ginger, Polly and Ms Grundy and the rest of the Pussycat dolls do not have portraits.

At least Archie has nice abs! 17 more days until the premiere ONTD!!!

In his speech, Affleck pointedly commented, “It’s my kids who give me permission to do this because they have the character to keep at bay all the noise that sometimes surrounds people who live publicly.” It seems this “noise” could be a reference to the 2010 sexual harassment allegations made by two women who worked with Affleck on the hoax documentary “I’m Still Here.”

I'm really not sure if he means the actual lawsuits or the backlash about them, WDYT ONTD?
source

sorry I fucked up the title

The series will be written by James Robinson and illustrated by Aco. It will star Nick Fury Jr, the son of the original Nick Fury.

Here's what I love a lot this year (also none of the cast in these have been accused of sexual assault!) pic.twitter.com/Mhn5pQjtCv

-Charlie Hunnam dropped out due to scheduling conflicts
-Cinematographer, Dan Mindel posted photo on Instagram of one of the cameras used on the film
-Names taped to the side of it included the names of Rinko Kikuchi (Mako Mori), Charlie Day (Newton Geiszler), and Burn Gorman (Gottlieb) as list of actors/characters being shot that day
-Karl Urban's name is also included though this is the first time he's been reported to be added to the cast that includes John Boyega as the son of Idris Elba's character from the first movie, Scott Eastwood, Jing Tian, Nick Tarabay, Levi Maeden, and Adria Arjona.
---
Wondering how they'll explain Hunnam's absence, but I'm here for these three returning!

The @womensmarch on Washington revealed a list of celebrities expected to march alongside over 100,000 women: https://t.co/QuSrg9HZ19

Mark Pedowitz, CW Prez, basically said that the show got renewed because of the awards it has received in the past (and its recent nominations) and its continued accolades by critics so the ratings don't really matter that much.

First episode will air on 2/19 with the 1st and 2nd episode available on the CBS streaming service CBS ALL ACCESS. The rest of the 10 episodes will be made available on a weekly basis.

The TCA panel had a lot of Trump discussion and how he has a strong-ish presence on the show and it made me less excited, ngl. :/ But I love Baranski sfm and now I can watch her in peace without J*lianna's presence (:

Meghan McCain, daughter of loser John McCain and self proclaimed Blonde Republican, seemingly came to the defense of the man who attacked her father and mocked a disabled reporter.

This Meryl Streep speech is why Trump won. And if people in Hollywood don't start recognizing why and how - you will help him get re-elected

At which point Billy Eichner called out the world's most accurate definition of nepotism...

- link to the pics from their "date"

Source
I'm still not over these terrible names but I love this family.

Unlike the rest of us, Ronaldo had an amazing 2016- winning Champions League, EUROS, UEFA Best Player, Club World Cup and the Ballon d'Or.

Carli didn't do anything but w/e. The new Mary Wambach tbh!!

even assuming she, like most americans, doesn't know it's a slur, this is still such a weird choice of words to describe a group that includes Ross Gellar and John Travolta

@russiademitro87 I am terribly sorry! I am clearly not educated on this subject, but I am now, and won't make the mistake going forward...


Spears and her rumored boyfriend are in Puppy Love

The singer uploaded the picture of the two in bed to share with her fans and instagram followers. Spears met the personal trainor/ model, Sam Asghari (22), on the set of her latest music video for her single Slumber Party.

Emma Stone had the perfect answer when Ryan Seacrest asked about her dress https://t.co/XfSME6BtWO

* Ryan Seacrest asked Emma about her dress
* “Well, it’s pink and there are stars on it" Emma said "And it's Valentino"
* Emma wanted to talk about her movie not about the dress
* #AskHerMore campaign, which champions the idea of women being asked about more than just their clothes on (last year Cate Blanchett, who caught a cameraman taking a sweeping, full-length shot of her to capture her outfit "Do you do that to the guys?" she demanded)

I WILL get a Grammy nomination one day. No more fuckin around. Let's GO!!!!!

*The above image was taken from Morgan90's previous awards posts, I don't know how to use photoshop or whatever, so credit to them*

The nominations post is here and the voting post is here
I guess there could be some spoilers in some of these wins, I don't know.
Thanks everyone for voting!

I tried to make the format look semi-good, hopefully it worked.

Actual Angel Sufjan Stevens will write and perform original songs for Luca Guadagnino upcoming drama, Call Me By Your Name aka Why Harm An Innocent Peach? No words as of yet if Drake will be involved.

ONTD, are you looking forward to even more Straight People listening to Sufjan and hear them blatantly deny the homoeroticism in his lyrics?

Is Liz here for The Right Reasons®?

Personally, I often seek out 1 night stands months later to confess my undying love for them.

Brady has previously starred in productions of Chicago and Kinky Boots on Broadway. He will be in the Chicago production of Hamilton thru April 9th.

Source 1 and 2
So he'll be my Burr when I go in March. I'm definitely intrigued.

- Hiddles was being interviewed when Nicole Kidman came and interrupted: "That's enough"

- He tried to play it off by interviewing Nicole

- Nicole was a bit embarassed but interrupted under the guise of being happy to be at the awards, and "determined to have fun"

- Tom said he "loved" the interruption don't get any ideas buddy


ONTD have you ever tried to save the world from future floppage? 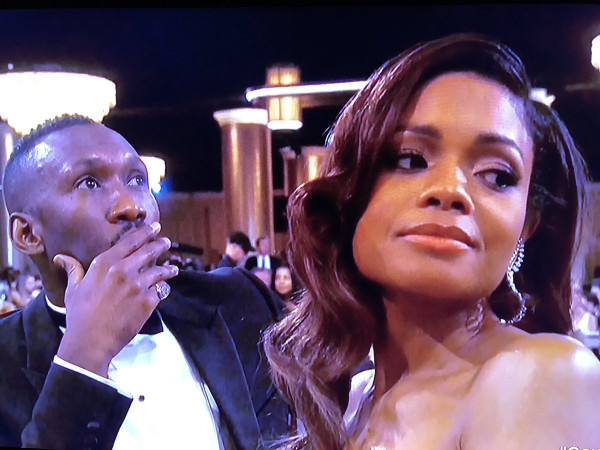 In case you missed it while interviewing Pharrell last night on the Golden Globes red carpet Jenna Bush Hager (yes one of those Bush twins) accidentally referred to Hidden Figures as Hidden Fences. While appearing as a co-anchor alongside Al Roker and Natalie Morales this morning the former First Daughter apologized for her flub on the air.

"I had an error in the night which I have to apologize for. When I was interviewing the incomparable Pharrell, who I adore, I accidentally in the electricity of red carpet - which I have never done one before - called Hidden Figures Hidden Fences," she stated. "I have seen both movies. I thought they were both brilliant. I interviewed cast from both of the movies and if I offended people I am deeply sorry. It was a mistake because I am," she continued while choking up. "Y'all know I am not perfect. I am authentic but I'm a human and what I didn't want to do was make anybody feel lesser than who they are. So anyway I hope I apologize to both the cast, to Pharrell... but it was a mistake... and I hope we can all move on."

Feels like we’re gonna get a lot of use out of this emoji tonight. 🍆🍆🍆🍆 #CBB pic.twitter.com/RIh87pVZWP

-The house reveal their thoughts on each other while they nominate (in private)
-Stacy reveals that she used to day Wesley Snipes and that he has a HUGE penis, biggest she's seen and the sex was not good since it hurt so much
-Stacy gets emotional and feels restrained in the house
-The All Star season has brought the lowest ratings to date for the CBB series

Bella Thorne is teaming up with skincare line Bioré to promote their three newest acne-fighting products.

Bella says she constantly makes posts on Snapchat about her acne since she wants to help kids with acne.

She opened up about her own struggles with acne, saying it's normal to wonder if you're pretty or not.

By partnering with Bioré, Bella hopes to raise awareness and help those who struggle with face dysmorphia.

Do you have face dysmorphia?

As a martial artist and an MMA promoter, here is my open letter and #Bellator170 invite to the very talented #MerylStreep #GoldenGlobes pic.twitter.com/zostN22RAK

Scott Coker, promoter of Bellator MMA, has invited Meryl Streep to attend an event in LA after bashing the sport as "not art." Whether Meryl has accepted or declined is unknown.

Is MMA art, ontd? would you attend an event after bashing it? asking the tough questions here.

Samantha Bellingham, the stalker Sarah of New Zealand, got a picture with French legend Isabelle Huppert. Apparently this convo happened when they met:

I told her she's way better than every other actress nominated and deserves to win. She said "I think so too"

Are you way better than everyone? And more importantly, do you know it?

( Collapse )
Also a reason for an episode discussion. Marathon this, it's cute. It talks about mental illness, sexism, LGBT, and has a beautiful cast.

Emily Locke lands her dream job as Director of Research and Development for Wayne Security in Charm City, home to super heroes and villains and citizens fed up with the collateral damage of their constant fighting. Full of confidence and big ideas, Emily quickly learns that her aspirations far exceed those of her new boss and officemates, so it will be up to her to lead the team toward their full potential and the realization that you don’t need superpowers to be a hero.

I just want to set fire to everything related to Noah and his plots. Next week, we go back to Alison and Cole, thank GOD.

After final box office numbers were tallied, Hidden Figures came out on top with $22.8m beating Rogue One: A Star Wars Story which made $21.9m and has been sittin at the top for the past 3 weeks.