He thought that was the appropriate time to interrupt her 3 times and talk about how he can't focus on the interview because she's pretty and call her sexy af.

Before the video, posted to her YouTube channel, Carol talks a bit about it, highlighting how uncomfortable that made her and how all she could do was laugh in the face of such discomfort and disruption of her job. She also promised to talk more about it in another video. Of course she's now being further harassed for exposing his ass, with lots of people saying she should've been thankful for the unwanted compliments.

The actual interview after the first few seconds of the video is in English:

Mods, I'm on my phone so sorry if the formatting is a bit bad.

A BSAA SOU team led by Captain Chris Redfield investigates a mansion linked to a B.O.W. smuggling operation, which is infested with Zombies infected with a new viral strain. There he finds Glenn Arias, a black market dealer wanted by Interpol, but Arias gets away when the mansion explodes. He is soon joined by one of the BSAA's advisors, Dr. Rebecca Chambers, who begins developing drugs to combat the virus encountered in the mansion.

The laboratory is attacked by one of Arias' accomplices at the end of her research, and Chris saves her from infection. Following the attack, they get the attention of DSO agent Leon S. Kennedy, who is on orders from the President to investigate Arias. Concluding Arias is involved in an upcoming terrorist attack they head out to New York to find him before it can take place.

( Collapse )
---
These movies are a bit of a guilty-pleasure for me. The fourth CG film of the series, set after the events of RE:6 I'm glad to finally see Rebecca in one of these, but hoping she's not just a damsel-in-distress like the trailer seems to imply, otherwise... And since Leon is in this, hopefully his eternal crush will make an appearance as well.

Adam speaks on the experience of working on Star Wars: “Because J.J. Abrams and Rian Johnson directed those [Star Wars] movies, they still feel like independent films to me. They don’t sacrifice story for spectacle.”

Andrew, conversely, speaks on the dissapointment of playing Spiderman: "There has to be something urgent about the stories we’re telling, otherwise we’re a part of the numbing of the culture. I think that was hard, doing the Spider-Man stuff. Because even though I felt an opportunity to do something for young people—adolescents who were going through the confusion of ‘What’s my gift? Who am I in the world?’—it ultimately became about shareholders and McDonald’s. It ended up flattened and made to appeal to everybody. That’s a heartbreaking thing."

For her story in Rolling Stone, Emma Stone talks about facing discrimination in Hollywood.

“There are times in the past, making a movie, when I’ve been told that I’m hindering the process by bringing up an opinion or an idea,” the 28-year-old La La Land actress told the magazine. “I hesitate to make it about being a woman, but there have been times when I’ve improvised, they’ve laughed at my joke and then given it to my male costar. Given my joke away.”

“Or it’s been me saying, ‘I really don’t think this line is gonna work,’ and being told, ‘Just say it, just say it, if it doesn’t work we’ll cut it out’ — and they didn’t cut it out, and it really didn’t work!” she said.

lovingthisconcept.gif
I wonder if they're getting back to electropop...

when you go to a sporting event, do you wear something denoting your preferred team or a plaid shirt, ontd? 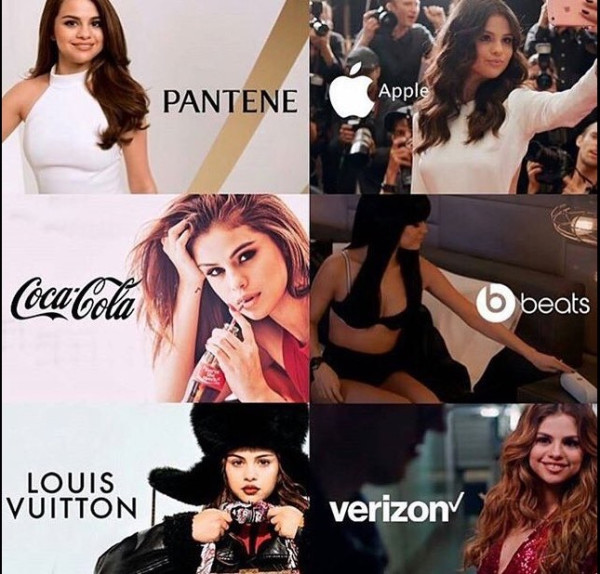 Gomez received $10 million to become the new face of Coach.
She's also had high profile endorsements with Coca-Cola, Louis Vuitton, Pantene, Verizon Wireless, among others.
Her ability to stay relatively drama free is a factor in why big brands love her.
She was a staple on pop radio in 2015-2016. Boasting three Top 40 #1s from her #1 Platinum album Revival: Good for You, Same Old Love & Hands to Myself.
She has a huge presence on social media, being the most followed person on Instagram with over 105 million followers. Her Instagram posts are worth $550k a piece as she pulls in 3 million likes per photo.
Stay fuming, ONTD. Selegend stays winning!

Viola Davis stopped by The Tonight Show with Jimmy Fallon and shared how she likes to chill during her time off.

Per interview with The Financial Times that was posted today:

“I’m not with Amanda any more,” he whispers about the partner/possible wife/possible ex-wife who he met in 2001, and with whom he has two children. “It’s very, very amicable — I’ll always love Amanda.”

He also swears a lot and talks about politics and acting.

IDK if anyone else cares but I'm genuinely sad about this, Amanda is awesome.

Nooooooooo! Why you gotta do me like that, SVU?

ONTD, how's everybody doing? Do you miss SVU? The last episode aired almost 2 months ago, so I've forgotten literally everything that happened in S18 (which was not much), but this promo has me excited again! Also, I miss these posts! OH AND PRAYER CIRCLE FOR MY BB CARISI, PLS.

-Will debut for FREE on Crackle Jan.12
-Will be a hot mess

Considering how Zayn and Perrie's engagement went, it's smart of Gigi to decline, if this story is true

Ms. Fairman was found unresponsive in the bathroom of a friend's home. Her death is currently under investigation by the coroner's office.

She appeared in Season 2 of '16 and Pregnant' and has struggled with substance abuse. She was arrested in 2015 on prostitution charges. She is survived by her 7 year old daughter.


Source
"Mistletoe Bikini" is currently available on iTunes. How are you planning on keeping the ho in holidays this year?

- A source says they're dating and having fun.
- She was dating St. Vincent like a week ago.

Where is her oscar tbh!

Do you think Cruise and Travolta will ever BreakFree.mp3, ONTD? TYFYA!

Have you ever felt you were at The Hunger Games, ONTD? Talked with a deceased uncle? TYFYA!

Avril Lavigne has taken to Twitter to respond to Mark Zuckerberg's Nickelback diss. Mark Zuckerberg dissed Nickelback in a Facebook video where he introduced his new home AI technology. In her letter to Mark, Avril writes that his jab at Nickelback was in poor taste. She goes on to say that he shouldn't promote bullying, especially given with what's going on in the world today.

ONTD, ARE YOU FUCKING READYYYY TO FIND THAT FLIPFLOP?!!!

Do you feel like you are gay, ONTD? TYFYA!

Jesse Plemons is the worst schmoozer in Hollywood https://t.co/jKhH8R9BNr pic.twitter.com/VW1Du7bSLB

Do you get asked about your weight a lot, ONTD? TYFYA!

The good sis tolkienjedi made a supercut of Diego Luna, who plays Cassian Andor in Rogue One: A Star Wars Story, saying over and over how much he wants to feel up (and even french kiss!) Jabba the Hutt, the giant slug of a crime boss from the original Star Wars trilogy:

Have you been touched (emotionally) by Diego Luna's performance in Rogue One yet?


In recent scandalous events, Bella Thorne Throne has gone onto social media to dispel the cheating rumors. In the last 24 hours, she tweeted:

Ty and I have been broken up for like over two weeks and charlie and I ARENT DATING we are friends. That article was written forever ago.

Twitter is not buying it, though. In her sudden rise to relevance, the hashtag #BellaThroneIsOverParty has circled the web.

Has Bella Throne been crowned queen of messiness, ONTD?

Villeneuve is in early talks to direct Legendary’s “Dune” reboot.