Hamilton made a mistake. Audiences shouldn't have to worry about being blindsided like that. Theater should be sanctuary for Art to speak.

Lin-Manuel is a genius. He has created the greatest play since West Side Story. He is also a role model. This sets a terrible precedent>

>Completely inappropriate. Theater should be a safe haven for Art to speak. Not the actors. He needs to apologize to Mike Pence @Lin_Manuel

Source 1 and 2
For anyone that doesn't know Stevie Van Zandt is a member of the E Street Band. Also, Lin-Manuel Miranda hasn't been in Hamilton since July 9th and was therefore not on stage last night...

Waaaa! The mean Hamilton cast spoke out politely and respectfully to Pence! Waaaa! Now the right is boycotting a sold out show! #HaGoodLuck

You can "boycott" the theatre, but we will continue to invite you to hear our stories and be inspired.

The legendary Kate Bush sat down with BBC 6 Music’s Matt Everitt for her first interview in five years. In it, she discusses her friendship with Prince, anxiety, her reputation as a recluse (she denies), and the long-awaited upcoming triple-album of live recordings from her 2014 residency at the Hammersmith Apollo — her first full live performances in 35 years.

She also touches on the current political climate, as well as future plans for touring and songwriting. Listen at the source.

In a new radio interview the 2 On singer talks about how Slumber Party came together, filming the video, and how the pop veteran took charge and directed Tinashe on set.

A psychological thriller about a man who bumps into an old flame and subsequently becomes obsessed with her, leading him to hold her captive underneath the animal shelter where he works. But what will the victim have in store for her assailant?

Bruce Springsteen's wife, Patti, posted a picture of the two of them at the matinee of the musical Hamilton today. Her caption on the picture reads:

This comes the day after a member of Bruce's E Street band, guitarist Stevie VanZandt, went on a twitter rant about how the cast was disrectful to Pence & that Lin-Manuel owned the VP-elect an apology.  You can read his tweets HERE.


SPRINGSTEEN DOESN'T HAVE A TAG????

will post more pics as they come through
source 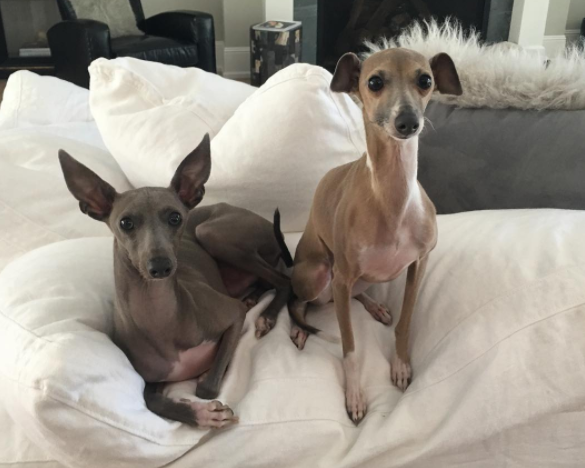 Official Grandmother Kylizzle Jenner shared on her Snapchat that her dogs Norman and Bambi had two puppies today!

The couple has been together for almost 2 years, the twins are their first children!
( Collapse )

Are your dogs spayed/neutered ONTD?

- the film (currently titled "Christopher Robin") is set to be directed by Marc Forster who directed World War Z. The script is being written by Alex Ross Perry.
- The film will follow Christopher Robin, the little boy who befriends a lovable bear in the celebrated A.A. Milne books, as an adult. According to sources, the film will share similarities with Seth MacFarlane’s fantasy-buddy film “Ted,” but center more on family fun than vulgarities. Monica is back and her first task is to help Debbie get back Franny. Meanwhile, Frank tries to avoid her, Ian has his first fight with Trevor, Lip tries to mask his relapsing alcoholism and Fiona's laundromat gets a bad review.

-started at the back of the pack today after failing pre-race inspection & worked his way up
-car had issues all day/ran 5-6th place
-joey logano, carl edwards, & kyle busch were the other 3 contenders in the new chase format implemented 3 years ago
-punk ass rat joey logano took out class act carl edwards with ten laps to go, giving johnson an advantage when the race went to an automatic red flag
-ties richard petty and dale earnhardt with 7 championships each
-this was tony stewart's last race

ontd nascar fans, do you think jimmie has an 8th championship win in him?

Who will rule? Who will fall? #Vikings returns Wednesday, Nov. 30th at 9e/p. pic.twitter.com/vtf2zTJkCz

Performances by Bruno Mars, Kendrick Lamar and Sting among others!
Hosted by Gigi Hadid and Jay Pharaoh.

The cast of #GilmoreGirls takes a look back and chooses their FAVORITE episodes from the series! 🙌 pic.twitter.com/u6DsWvoxeE

Ontd what's your favorite GG episode/scene? Also, have you ever been married onscreen and forgotten about it?

With Kevin Smith back directing, KILLER CAITLIN ~*emerges*~, and two hot middle aged men have a heart to heart.

In this fall's ~*epic*~ crossover, which is specifically designed by Berlanti & Kreisberg to force us all to watch Error for one week only, some aliens called the Dominators attack Central City, so for unknown reasons related to poor decision making Barry goes to Star City to ask some flop who failed his city for help in stopping them.
Turns out it's a bit bigger than they thought, because it requires a 4 show crossover for ratings, so Barry tracks down the Legends, and along with Cisco create a breach to fetch Supergirl over for extra help (aka the only help Barry hires actually equipped to fight aliens).
They come up with a plan, etc etc, but "a shocking secret related to Flashpoint is revealed and suddenly no one is sure who they can trust."

Meanwhile, Wally wants to stick his oar in and battle against the Dominators, but Iris tells him he's not ready and to take a seat.

In this season's Christmas episode, Barry is unfortunately unable to focus upon the Holiday Season and #Westallen thanks to those pesky rascals Dr. Alchemy & Savitar.
Determined to be good at his job, Barry heads over to Earth-3 to get some much needed advice from Golden Age Flash Jay Garrick (guest star John Wesley Shipp).

Wally reveals that he's been training with H.R (TomCav, which explains fans spotting them both out filming alone in the woods together a few months ago), in order to help Barry stop Savitar, which naturally doesn't go over well with Barry.

Also, Cisco faces his first Christmas without his brother Dante (thanks a lot, Barry), and 'old wounds are reopened'.

According to Mashable, as reported by FlashTV, Greg Grunberg (known for Heroes, Lost, and being friends with lots of industry people so he gets cast in things due to nepotism) has been cast in the recurring role of Detective Tom Patterson, debuting this coming week in 3x07 'Killer Frost', directed by his close friend Kevin Smith.

The character is described as a "gruff, stalwart figure at Central City Police Department, Det. Patterson is unwavering in his commitment to protecting Central City from the dangerous metas that threaten it."

-Wally is present in the crossover
-We find out who Dr Alchemy is in the MIDSEASON FINALE!

Following the introduction of HR Wells, talking with The Nerdist from on-set in Vancouver, everyone's multiverse fave TomCav talks playing the Many Harrison Wells' that make up the foundations of the OP's heart.

Tom reiterates for the umpteenth time that he feels the show works best with "conflict large and small", and how Berlanti et al. allow him to make everything up as he goes along (because he does it better, lbr).

Speaking with TV Insider at Error 100, the Flash Fam's One True Queen Candice Patton talks #Westallen this season and the Crossover.


This Past Two Weeks On: 'The Flash Cast Doing Stuff On Social Media'...
Lots on the go this past two weeks, with conventions (such as Vancouver FanExpo) and the US Election happening (thanks for nothing, Barry).

Keiynan Lonsdale and Violett Beane went to anti-Trump protests and posted about it.
Patrick Sabongui (Captain Singh) and actress wife Kyra Zagorsky (Helix) march against Trump with their two young children.
Not included in this Roundup is Grant Gustin constantly tweeting and retweeting anti-Trump messages and slamming Trump on his account, but just because no images are involved, and it's all text-based.
Violett Beane, Rick Cosnett, Danielle Panabaker, Keiynan Lonsdale, Patrick Sabongui, and most importantly the BIGGEST Hillary Rodham Clinton stan alive John Wesley Shipp (❤️) have also been tweeting anti-Trump news and commentary following the election.


Dear ONTD FlashFam - do you even exist without Iris West? And have you gotten to The Cuff Stage with HR yet?
❤️

Really did not see this coming after the Milos match yesterday. Amazing effort by him.

"The Devil and God Are Raging Inside Me" was released on November 20, 2006. The album was extremely well received, and the album artwork is iconic. In a recent interview photographer Nicholas Prior talked a bit about the history of the photograph, his connection with Brand New and the little girl on the cover.

What's your favorite TDAGARIM song? Also how old do you feel right now?

Inhuman and vicious beyond belief. Didn't think I could feel any worse. The shame, the shame! https://t.co/TUz9B2oKmN

Do you know what’s going on in Standing Rock @POTUS? Sign the petition to #StandWithStandingRock: https://t.co/tPyYqL70vB #NoDAPL

Spraying water cannons at night 26 degrees! Criminal -
Where are you @BarackObama?!?!!! #NoDAPL

I urge you to look through the #NoDAPL hashtag. It's despicable what law enforcement is doing. Water Protectors, stay safe. 🙏🏼

Gigi Hadid, who is no fan of president-elect Drumpf and his family, took some quick shots at his wife Melania during the AMAs on Sunday night.

“Spray painting swastikas at a children’s playground is a messed up thing to do.”—@AdRock makes a call to action https://t.co/vT8RMb7VKJ

Follow up to this post.
“We can’t and we won’t and we don’t stop.”
here's a video of his speech:

Adam talked about MCA's stance on non-violence, he talked about the various hate crimes that have happened around nyc / usa in the past few days, calls for action (protest, donate money to black lives matter, flint, etc) volunteer, stand up for each other, called what's happening 'home  grown terrorism' and said he rejects trump's vision of America.

It's nice to see so many people went and that Ad-Rock remains amazing.
source 1 source 2 source 3
source 4

No one was touchin these vocals tonighT

In case you missed it... pic.twitter.com/mFsCACbEYj

Bonus Degrassi moment on stage: Nina Dobrev presented Drake with the Best Rap/Hip-Hop Album AMA and he gave her a special Degrassi shout out

Popular Houston nightclub V Live, found itself in hot water this past week.

Transcript:
"Thank you guys so much. In 2014, this stage was actually the first time that I was authentically 100 percent honest with all of you. I think it's safe to say most of you know my life whether I liked it or not. And I had to stop. Because I had everything. And I was absolutely broken inside. I kept it all together enough to where I would never let you down, but I kept it too much together to where I let myself down. I don't want to see your bodies on Instagram. I want to see what's in [your heart]. I'm not trying to get validation, nor do I need it anymore. All I can say is I'm so grateful that I have the opportunity to be able to share what I love every day with people that I love. I have to say thank you so much to my fans, because you guys are so damn loyal, and I don't know what I did to deserve you. But if you are broken, you do not have to stay broken. That's one thing you should know about me: I care about people. And this is for you."

THIS JUST IN: Kanye West cancels show at The Forum last minute, according to Ticketmasterhttps://t.co/ASb9Qi42Dv pic.twitter.com/FoG7kml3or

And shortly after canceling his show, he flooded his Instagram page with shitty pictures of a fashion collection. Some people have pointed out that some of the photos are from a previous Maison Martin Margiela collection. Could he be hinting at a collaboration with the label?