The new season of Billy on the Street premieres tonight! 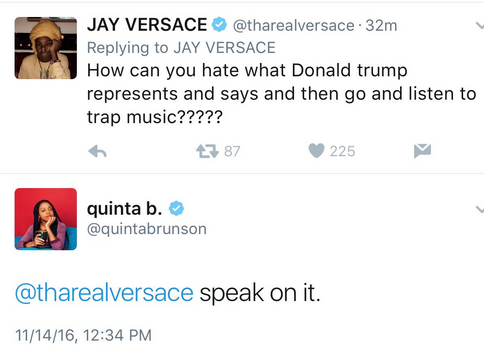 therock This just means I'm still up at 4am trainin' hard, takin' care of my babies, drivin' my pick up truck and tellin' a few dirty/nerdy jokes... extremely sexily of course.

Huge THANK YOU you to the entire hard working and very cool staff at @People as well as all the fans worldwide. I'm honored and grateful for the luv!

Remember, sexy isn't something you "try and be". Sexy happens naturally when you're comfortable just being yourself.

Trust me, I'm an expert at this. (plus I read the "how to be sexy and a great kisser" guide when I was 8). #SexiestManAlive

It's depressing that he is the second MOC to win this title. Just him and Denzel...


Are you joining the fight against the Dakota Access Pipeline, ONTD?
Source
Source

Ivanka Trump and her staff celebrated the opening of her new office by taking part in the #MannequinChallenge. Ivanka and her team are seen posing with mannequins while celebrating their new office with a champagne toast.

We opened the new #TeamIvanka office and had to partake in the #mannequinchallenge. Mannequin included 😉 pic.twitter.com/w7vczgMiiq

the first was the show putting on a look it knew its viewers would want, the second was a snap back to access-preserving false equivalency

This show chose at every turn to display about as little courage or decisiveness as possible, beginning with having Trump host last Nov.

How naive you are, @DPD_
SNL tell people who to vote for?
Don't think that doesn't cross their mind.
But NBC execs kill that

That is wrong.
SNL did not seek to "endorse" anyone.
My implication was EVEN IF THEY HAD, NBC would have stopped that.

Tom Neyman, who played The Master in "Manos: Hands of Fate" passed away on November 12 according to his daughter. He was 81. The low budget film attracted attention when it was featured on Mystery Science Theater 3000 in 1993. In spite of being called one of the worst movies of all time, Neyman and his daughter (who also starred in the film as Debbie) embraced the cult classic status and loved interacting with "fans" of the film.

In addition to acting in the film Tom, an artist, designed all the sets, helped create the costumes and did most of the makeup for the cast.

So sad, I've heard from a lot of MST3k fans who have met him that he was a wonderful guy who loved how much joy the movie brought to people, even if it wasn't in the way he intended. Today is also the 50th anniversary of "Manos: The Hands of Fate", so it would be a good day to watch it and celebrate Tom's life.

Sorry for sharing this, but Tony Bennett revealed he "met" his wife while she was still in utero https://t.co/InMWLvihFE

- In Tony's new book, Just Getting Started, he writes of meeting his wife’s parents back in 1966 when he was 40 years old. Susan's parents took a photo with him after attending one of his shows in NYC.

- "As fate would have it, Marion was pregnant at the time with Susan! It’s a photo we all laugh about, knowing the incredible turn of events that followed,” Bennett writes.

Kathy Griffin appeared on Larry King's show, where she shared the story of the time when Britney Spears invited her up on stage during the performance of her song "Freakshow" at her Vegas show. When Britney invited Kathy up on stage, Britney didn't know who Kathy was, even though she has met her multiple times before, and her backup dancers had to tell Britney who Kathy was.

During the interview, Larry asked Kathy if she ever forgets what city she is in while touring, and Kathy said that she empathizes with people who tour. She then asked Larry King if he knows who Britney Spears is, and he says that she's been on his show twice before.

Kathy then asks Larry if Britney ever gave him the "pinwheel eyes" because she's "not all there." She continues, asking Larry if he was gentle with Britney and "got through to her in a way that her doctors couldn't," since she is "fragile."

In her new book, The Princess Diarist, Carrie Fisher has revealed that she and Harrison Ford had a three-month long affair on the set of Star Wars.


The Princess Diarist recalls the diary she kept throughout the affair, in which she "relentlessly" tried to make him fall in love with her and dreamed that he would ask her to marry him with a "gold band with diamonds (inscribed) 'Carrison.'"

- Bounce TV takes the allegations against Cosby "seriously," but says its research shows African-Americans "see a distinction between Bill Cosby, the man, and the iconic TV character Cliff Huxtable."

- Bounce has not shown reruns of the show since July 2015.


emilyalthaus Protesting with my @oitnb family.
Why protest?
Because grief
Because solidarity
Because Love Trumps Hate... and taking to the streets to proclaim that FEELS GOOD. 🍊⚫️❤️

Red, starring Cate Blanchett and Alex Russell, is a high-art short film by Del Kathryn Barton. Blanchett plays Mother, a "spider-like" woman who eats her partner after sex. The short is considered by Barton to be a celebration of female power inspired by the mating rituals of the Austrailian Red Back Spider.

Red will premiere at the Adelaide Film Festival in January.

have you ever sexed someone and then ate them, ontd?


YouTuber Sophie Rose was recently interviewed on ITV's This Morning and spoke about how she wishes to destigmatize extended breastfeeding. Over 8 million people have watched this vegan 40 yo mother breastfeed her 4 yo homeschooled son. She adds that she has no qualms about breastfeeding her son until 8. The doctor on the show counters her claims that there are nutritional benefits to breastfeeding past the age of 2.

Sophie Rose's response to her interview can be viewed here. (Potentially nsfw)

Ally has joined Cranberry Management, which also manages Echosmith who's she been in the studio with before.

(1/2) sorry for the small font, but I wanted you all to read this. pic.twitter.com/9BAKHJMTdJ


“I don’t know how people got so goddamn stupid. But it’s really weird, because it’s like the last eight years, now it feels like a lie,” Shannon said. “… Racists, sexists. And a lot of these people, they don’t know why the f— they’re alive. They know it. They’re doing drugs, f—ing killing themselves. Because they’re like, ‘Why the f— am I alive? I can’t get a job, I don’t know anything about anything, I have no curiosity for life or the world.’ So this Trump thing is like getting a box of firecrackers, or something. It’s like, ‘Well, this will be fun for a little while, this’ll kill some time.'”


He also was quoted by Variety about the time he fell asleep watching "Batman vs Superman".

“I shouldn’t have been watching it on a plane. But I never go to the movies anymore!”

ONTD, what movie did you fall asleep on?

After an influx of patents at the C.U.R.E. institute, Dean Munsch and Chanel organize a blood drive to solve the hospital's severe shortage. Meanwhile, Nurse Hoffel sets a plan of revenge in motion, Hester finds a way to join the hospital's staff and a shocking revelation involving The Green Meanie occurs in the all-new "Blood Drive" episode of SCREAM QUEENS (airing Tuesday, Nov. 22)

-Noah, 16, is Miley's younger sister
-This is her first single and features Labrinth
-Already getting very positive reviews!

Leading up to the election, many celebrities were using their platform to voice support for their presidential candidate of choice - mostly Hillary lbr, and encouraged their fans to vote.

Noticeably absent was Taylor Swift who famously told Vanity Fair 'There's a Special Place in Hell for Women Who Don't Help Other Women' when Tina Fey and Amy Poehler joked about her love life.

When Taylor took to her Twitter account last week with a simple message to encourage followers to vote, many took her lack of endorsement - as an endorsement for Donald Trump.

The self-proclaimed feminist did not publicly discuss Trump's controversial statements on women and the allegations made against him during the campaign.

It may be that she supported Hillary, but an endorsement of her may have led to backla$h from her fan$ and the $$$ was more important to her in the end.

ONTD, are you enjoying Nightride, the album of the year?
If you haven't listened to it yet, why are you not allowing yourself to have good things?

*Already a thing in Europe but just hit stores in the US on Nov. 14th.

Lauren Jauregui fans come to her rescue after a photo of her kissing another girl surfaces online.https://t.co/0TSTunN4jb pic.twitter.com/NFgBB5yXU3

Fans immediately came to Lauren's defense after she was believed to be outed as either lesbian or bisexual.

In the photos, Lauren can be seen kissing a girl during a family friend's wedding.

The girl she is kissing is Lucy Vives, the daughter of famous Colombian singer Carlos Vives.

Pictures at the source.

In a recent interview, Alvarez confirmed he will be directing 'The Girl in the Spider's Web'

Since the new film will be an adaptation from '...Spider's Web', two books in the middle of the story will be left without an American movie version - The Girl Who Played With Fire and The Girl Who Kicked the Hornet's Nest

He said he also has plans for a 'Don't Breathe' sequel

Spirited Away to Be Re-Released in U.S. Theaters For 15th Anniversary - https://t.co/RiQRVkp5Zz pic.twitter.com/PKUngGJb4R

SOURCE
Are you going to see one of the best movie of all time in theaters?

ONTD, will Slumber Party ft. Tinashe make a good second single? Can the Queen save her iconic videography and erase the damage done by the Make Me video fiasco?

- Dami Im releases new MV
- Australian artists on major labels continue to receive a $100 budget for their MVs but this one looks slightly better than normal
- New electronic sound
- Interviewed on The Panel
- They discuss who should represent Australia @ Eurovision in 2017, hosts recommend The Veronicas and Darryl Braithwaite (lol), Dami recommends 'Nollsy' (lol)
- Is Cosmopolitan's artist of the year
- Remains humble

Blogger freaked out after girl travels round the world making EXACT copies of her Instagram pictures
https://t.co/dhSbWRNO7L

- a few days ago she discovered the (now private) @diana_alexa account copies her pics to a T, including travelling to the same places (Morocco and Greece) and wearing the exact same clothes