The film is an adaptation of author Naomi Alderman’s novel of the same name. As well as starring in the film, rachel Weisz is also set to produce.

Alderman’s novel revolves around Ronit, the estranged daughter of a rabbi, who returns from New York to the Orthodox Jewish neighbourhood she grew up in North London, following her father’s death. Her arrival causes upheaval in the quiet community.

A London shoot is planned for this winter.

No episode next week due to the second presidential debate. 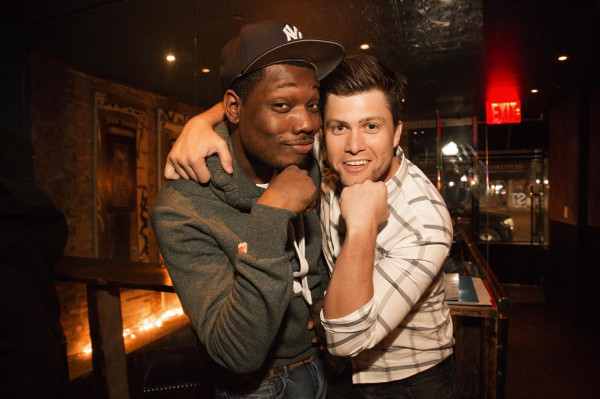 Michael Che and Colin Jost were recently interviewed by Politico’s Glenn Thrush for his “Off Message” podcast. They had this to say about Donald Trump:

Michael Che: “Should he be president? No. You know, let’s not pretend that this guy is a mutant and he’s the most evil, racist, mutant piece of crap that ever walked. Listen, there’s probably somebody in your building way worse than Donald Trump, and you buy bagels from him, and it’s fine. You know what I mean?”

Michael Che: “And you can’t deny that. That’s what bothers me, when people make it seem like, ‘You know what? I’m smarter than Donald Trump.’ Like no, you’re not, all right?”

UPDATE: Kim Kardashian's kids North and Saint were not in the hotel room when she was attacked, PEOPLE has learned https://t.co/S7t51UQLfn

I'll update this post as we get more information.

A interviewer from Sports Illustrated told Ben Affleck the score of yesterday's Bills/Pats game in middle of him doing promo for whatever stupid movie he's in. He was none too happy about it.

Watch: We had to be the ones to tell Ben Affleck the Patriots lost https://t.co/YBGfGZbYuJ pic.twitter.com/6PdUZ6SXgK

It was the first time the Bills shutout the Patriots in Gillette Stadium. The last time the Pats were shutout at home was 1993 (by the Jets).

( Collapse )
And here's the source!

How did your team do this week ONTD?

In an announcement made today in The Hollywood Reporter Warner Bros. has revealed their plan to bring all eight Harry Potter films back to IMAX screens for a one week engagement.

The run will begin starting on October 13th as part of a plan to bring in buzz for the upcoming November release of Fantastic Beasts and Where to Find Them.

The films will only be showing in 2D and will also contain greetings from the cast and exclusive content for Fantastic Beasts.

Greg Foster the CEO of IMAX Entertainment also said in a statement, "Harry Potter is one of the most beloved film franchises of all time and is incredibly important to the history of IMAX."

There are currently no prices available or further information as to if you can buy a ticket for each film or if there's some type of partial marathon being offered.

Source
Will you be going to revisit the series in IMAX?

Was at practice all morning so little late but wanted to share... https://t.co/1nrR0eWKBD

Prolific Comedic Actor and 2016 NBA Champion LeBron James has endorsed Hillary Clinton for president in a Business Insider op-ed. He's with her because:
-"she will build on the legacy of my good friend, President Barack Obama"
-She supports low-income children and single-parent households like he does
-Her message is one of "hope and unity"

Read the whole op-ed at the source

ONTD, is LeBron your favorite actor?

WATCH: "I was falsely accused. I was proven innocent. I'm not going to apologize for that." - Nate Parker on past rape claim pic.twitter.com/0W3otx4XIn

He's basically complaining about how much he's had to talk about it and shows no self awareness by talking about how his film is about social injustice.

WATCH: "Important thing is, this isn't about me. ... At some point [story of Nat Turner] is where our focus should be." - Nate Parker pic.twitter.com/7yC75tFRvI

Robin Roberts: This is a very difficult but necessary conversation for a lot of people. Your reaction to those allegations of years ago. They just don't feel the empathy. They don't feel that you have any remorse.
Parker: Who are we talking about?
Roberts: What we're talking about is what happened in 1999 with the woman who is now deceased who took her own life, and her family and others fell that in seeing your comments resurface that -- Do you have any remorse? Apologize for any of what happened?
Nate Parker: Look, I was on 60 Minutes last night. We talked about it. I think the important thing is this isn't about me! You know the story of Nat Turner as an American, to know the story of a man who was erased from history, at some point that's what our focus should be. Especially now. So many things are happening in America especially in the last 72 hours. So the hope is that people get to know the real story of America that has been so shifted aside with revisionist history. This is a film that they should see.

source:1/2
what the fuck kind of answers

Chloe Moretz is set to star opposite Dakota Johnson, Tilda Swinton and Mia Goth in the new retelling of the classic horror film "Suspiria".

Luca Guadagnino ("A Bigger Splash") is directing. David Kajganich is responsible for the script.

lol you have to watch this, having Kanye flashbacks

Wrestler Ric Flair has claimed he's slept with Halle Berry back in the 90s after her divorce from David Justice. Asked during his podcast by a listener which celebrities have gone on "Space Mountain," Flair said several dozen but only named Berry. Asked by his co-host if it really happened, Flair responded "Would I have to make up a lie?" Berry's rep had no comment.

would you ride space mountain ontd?

voltron s2 trailer for anyone who missed it!!! pic.twitter.com/BlvCYmr9AK

Seth is so done with everything omg

John Oliver discusses the systems in place to investigate and hold police accountable for misconduct.

HBO's new scifi show Westworld has come under criticism for its graphic, repeated scenes of rape.

-The show is about a futuristic Wild West theme park like a real-life videogame.

-Evan Rachel Wood's character Dolores is a headstrong woman who loves to paint and daydream, until she sees her family murdered and she is raped. As a character in the game, Dolores is forced to live this reality every day over and over.

-The other female charcter is a prostitute who is also sexually assaulted repeatedly.

-The game robots can't harm humans, but humans can do whatever they want to the robots, including assaulting them.


“You have an obligation as a storyteller to raise awareness and to show the horrors of that so that people aren’t desensitized to it. I don’t think there’s anything titillating about what we’re doing — it’s all horrific, as it should be."

“We don’t actually show sexual violence towards women. You never see a scene of like rape or anything, but you know it’s going to happen.”


How do you feel about this issue in film and media?

MY ALBUM IS DONE!

Excited to announce 24k Magic, out this Friday!! You can call it my first single, but I call it… https://t.co/lnwFWlgWgR

Coming this Friday to a speaker near you. #24kMagic pic.twitter.com/H6AnzWeuVn

-Finally set to release the follow up to his album Unorthodox Jukebox which was released 4 years ago.

Source
Is four the magic number for these artists? Who else had an album 4 years ago but hasn't released anything since?

Do you have a new look for Fall (Spring for those in the Southern Hemisphere), ONTD?

'#HamiltonsAmerica': All the Songs Performed by @Lin_Manuel, Original Broadway Cast in the PBS Doc https://t.co/CuUklvO0Oi #NYFF

[what time is it? SHOWTIME!]“Alexander Hamilton”

“Who Lives, Who Dies, Who Tells Your Story”

-Cameron Cuffe will play Seg-El, grandfather to Kal-El
-Seg-El is the scion of the once-prosperous El family and is blessed with an intuitive brilliance for all things technical
-The El family will see their rank pulled from them which puts them into the lower ranks of Krpytons elite at the beginning of the series
-Seg-El will fall for Supermans immortal enemy, Zods grandmother

Here for Penguin/Riddler. Not her for emo bad boy CloneBruce

Hey @SonyChannelPH and @osn - we need = representation on screen. Why'd you cut this? #equality #lovewins https://t.co/fyHVmi5N0K

This isn't the first time this has happened.

On Taylor Swift
"This will probably get me in trouble, but I don't see anybody in any sort of squad with a normal body. It's kind of this false image of what people should look like."

On the Bad Blood video
"I think having a song and a video about tearing Katy Perry down, that's not women's empowerment"

On Her ex
"Being sick was always a part of my relationship with him. I always had something wrong with me. I needed to let go of that."

The NRA has something sarcastic to say about Kim Kardashian West's Parisian robbery: https://t.co/P29pq1ifgY pic.twitter.com/DPGw85STXO

Wait, criminals held @KimKardashian at gunpoint in Paris? How is that possible? Does anyone know if they passed a background check first?

"The Assassination of Abraham Lincoln"

Lucy (Abigail Spencer), Wyatt (Matt Lanter), and Rufus (Malcolm Barrett) chase terrorist Garcia Flynn (Goran Višnjic) to the night of Lincoln's assassination, where they're horrified to learn that Flynn's linked up with history's most notorious assassin, John Wilkes Booth (guest star Kelly Blatz). Putting aside a tragedy of her own, Lucy speculates that Flynn intends to send the fragile nation into chaos by making a bad thing worse, and a debate rages among the team: should they alter history if it means changing it for the better?

Hayes confronts Wallace head-on, investigating the case that made his career ten years ago: the Prospect 3. Three young white men confessed to the rape and robbery of a young black woman. Hayes hopes to catch Wallace off guard with the team’s investigation, but the complex case serves up a major surprise. When the young woman’s character takes a hit in the press during the investigation, she is victimized for a second time, which Hayes takes personally.

Source
I somehow didn't know that Daniel Franzese was on this series before today so I now have an appreciation for this premiering on Mean Girls day. Did anyone watch? Thoughts?

So, how do you all feel about inappropriate mother/son chemistry?

What is the conspiracy about?

Chemtrail conspiracy theory is an unproven suspicion that long-lasting trails, so-called "chemtrails", are left in the sky by high-flying aircraft and that they consist of chemical or biological agents deliberately sprayed for sinister purposes undisclosed to the general public. Believers in the theory argue that normal contrails dissipate relatively quickly and that contrails that do not dissipate must contain additional substances. Believers in the conspiracy theory also speculate that the purpose of the claimed chemical release may be solar radiation management, psychological manipulation, human population control, weather modification, or biological or chemical warfare and that the trails are causing respiratory illnesses and other health problems.

On May 25, 2015 Kylie Jenner uploaded a meme on her twitter questions chemtrails. Hopefully one day someone will give Kylie an answer to her questions .

Parisian hotel where Kim Kardashian West was robbed has 'close to zero' security, according to former guests https://t.co/M4tPjHgLsy pic.twitter.com/4bOhsbDcGB