If the woman is FIRST billed & paid 2X what the male actor makes then I'll be OK w/ Mail-Order Bride comedy, in fact I'll root for her

@ConstanceWu I mean I'll root for her anyway. But anyone who thinks this is a ridiculous request oughta look into themselves <3 bc it ain't

@avidlyaimee I'm not siding w/ the content of the show, I'm just pressuring ppl to value women of color in a substantial way.

How many episodes have you watched? I've just finished watching episode 6 and I'm loving her as Misty. [Spoiler (click to open)]She's also going to be in The Defenders!

It's called MISSISSIPPI ROLL and it has been already delivered to the editors. The book will be followed soon by two other volumes.

-Gwen announced earlier that she's producing an animated series based on her mid-’00s backing dancers, the Harajuku Girls.
-She debuted the show’s theme song via her Facebook/Twitter pages

I checked her tag and the video hasn't been posted, just news about the show.

Susan Schneider Williams issues a call to action: The terrorist inside my husband's brain https://t.co/jKvzgOhhgv pic.twitter.com/ijuh1u2Tx5

- There was an incident where he was unable to remember a single line during the filming of Night At The Museum: Secret of the Tomb

- "At times, he would find himself stuck in a frozen stance, unable to move, and frustrated when he came out of it."

Getting frisky with Jonathan Ross

Did you miss Alexander Skarsgård's Night As A Drag Queen? Watch it here: https://t.co/sT2Au6ZP62

Interview with the Guardian

Alexander Skarsgård, then: just like the rest of us. Fond of a pub crawl, obnoxious at sporting events, constantly waiting for that tap on the shoulder telling him the jig is up. So life is still pretty much the same when you’re really, really, really ridiculously good-looking?

“I mean, fuck, I still wake up shivering in the foetal position,” he says. “I’m incredibly grateful for the opportunities I get. Getting drunk on someone else’s dime listening to Abba is brilliant, but my life is still shit. I’m still agonising. What the fuck am I doing with my life? Where do I belong? Who gives a fuck? Let me assure you, it doesn’t get any better.”

Have you ever wanted to grab someone's ass on television, ONTD?

Australian Rules Football had its Grand Final game yesterday (Saturday). Some celebrities went. Here they are.

ONTD Aussies, did you watch this historic match? I filled my AFL quota for the year and actually got super into it. GO THE DOGGIES!

- Lady Gaga will debut a new song called “Million Reasons” on October 5 at an undisclosed dive bar
- She will launch a three-date “dive bar tour,” where she will preview songs from her upcoming album Joanne
- The show will be live streamed on Bud Light’s Facebook page at 10 p.m. EST. Shows on October 20 and 27 will also be streamed via Bud Light’s Facebook

On Melvin Odoom's radio show, Britney Spears revealed that she would do Strictly Come Dancing (UK equivalent to Dancing with the Stars) if given the opportunity.

Simon Cowell appeared to suffer a wardrobe malfunction during the judges' houses stage of the competition on the X-Factor.

The media mogul, 56, listened to contestants while sitting between Mel B and Emma Bunton on his sofa with one leg folded up against the other.

But his position promoted a Twitter outburst as viewers mistook his bare toe for a rather different body part.

have you ever accidently flashed someone ONTD?

-Super gross pictures at TMZ but I'm not opening them, so you're on your own, ONTD

Emmalyn and Paula left the group, and now Lauren and Natasha are back with new member Jazzy Mejia. If you're familiar with Robin Antin groups, you'll recognize Jazzy's surname.
That's because she's the sister of former Girlicious member Natalie Mejia.

Taylor Swift was a busy girl last week, going from Nashville to NYC, then back to Nashville. Olivia took time from her busy napping schedule to hang out with Cara Delevingne, Taylor had dinner with Cara, Lorde, and Jack Antonoff, and she visited Blake Lively's new baby (no pics of the baby though).

Taylor and Cara headed out together in NYC tonight! pic.twitter.com/orf6I2NWKB

Really appreciate the opportunity to be heard in such a beautiful clear way. Thank you @guardian https://t.co/mDADB9AKuC


When she first went in to read for Taystee in OITNB, she was apprehensive because she didn't wanna play an "angry black woman". Through her experience in the show she says she'll never play a stereotype

Seeks out projects that tell diverse stories and says that both productions (OITNB and Broadway's The Color Purple) did an extraordinary job of bringing the experiences of WoC to the forefront.

Danielle was the first black woman to appear in 'Girls'.

When she was in4th grade wrote a letter to the mayor of her home town, Greenville, South Carolina regarding the Confederate flag. She wrote that there's 'so much pain and hurt that my people feel from this flag', and even designed a new flag but just got a generic answer back.

Hopeful that both TV and theater will continue to create conversations about social injustice and activism. Also mentions how most of the audience in her play is still white and hopes it gets more diverse (is unsure if it’s a money thing or if it’s more of an issue of who people are publicizing these plays for)

- Knows what she's going to be for Halloween, but isn't revealing it
- Wants kids, but not now
- Her nickname in high school was Candy
- Swallows pomegranate seeds
- Named her dog "Norman" after she looked up dorky names online
- Kendall named her other dog "Bambi" and Kylie hates it
- Uses the phrase "Go figure" at one point and then later clarifies that she didn't know what it meant and had to look it up

Following up this video of the elders reacting to Beyoncé's album "Lemonade", Beyoncé invited the elders to her Formation Tour and met them backstage.

Unfortunately Don wasn't there :( But still cute!
ONTD, have you ever met Rihanna Beyoncé?

Chelsea Houska from Teen Mom 2 got married yesterday to Cole DeBoer. Chelsea is currently 5 months pregnant, and the wedding was very small. She says she is going to have a second, bigger wedding next year after the baby is born (for some reason??)


ONTD, do you think having two weddings is tacky?

In a new interview with TV Guide, EP Wendy Mericle spills some more tea about the much speculated and discussed return of DC TV Regular Katie Cassidy, aka Black Canary.

The interview (source below) probably also includes other things that the few ONTDers still subjecting themselves to Error may be interested in reading ahead of the season premier... but never mind that.

TV Guide asks: "Katie Cassidy did sign a deal to be a series regular across all Arrow-verse shows. What ways might we see her appear in ArrowError outside of just flashbacks?"

Has your boss ever tried to destroy you and erase your entire existence by making you a prop to serve the cliché mess of some meathead's romance drama even on your deathbed, ONTD?

Kylie Jenner just bought another LA mansion for a whopping $12 million, according to a report: https://t.co/J86o4zQ4J2

-Her new property has 8-bedrooms, 11-bathrooms, gourmet kitchen, home theater, game room, pool, and spa and massage room.
-It is worth $12 million.
-In less than 2 years, she's purchased a $2.7 million "starter" home, a $6 million mansion (her current home), and the $4.5 million property next door.

Kim and Kourtney Kardashian leave little to the imagination in Paris https://t.co/g5EUSkM4A5 pic.twitter.com/kw1alSiXN1

Kim and Kourtney Kardashian’s latest appearance in Paris was perhaps their raunchiest yet as they stepped out for dinner on Sunday evening, hours before their morning robbery.

They were taking a break from Fashion Week and went to local restaurant Alaia.

11:51 ET:
The initial tweet from a CNN reporter has been deleted, but this is still the official statement from her rep:

"Kim Kardashian West was held up at gunpoint inside her Paris hotel room this evening by two armed masked men dressed as police officers. She is badly shaken but physically unharmed.

BREAKING: @KimKardashian was held at gunpoint inside her Paris hotel room Sunday by armed men; she was not harmed her rep tells me. #CNN

i just happened to see this on twitter the second it happened. i hope it's nothing serious :/

what do you guys think about her new album so far?

Maeve's emotions are tweaked by Elsie to prevent a recall; Lee floats his latest narrative to the staff; Bernard and Theresa investigate the extent of a host aberration; two guests arrive looking for different scenarios; the Man in Black enlists a condemned man to learn Westworld's darkest secrets.

Thoughts on the series premiere? 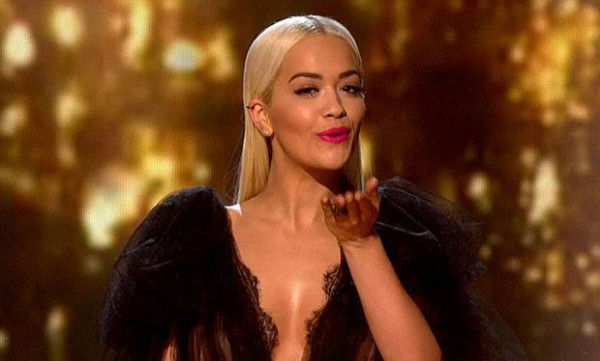