-Jenner has until Oct. 6 to be present for questioning or there will be a warrant for her.
-The questioning will be about Tyga's extravagant gifts that he's "given" her, like the $189,000 Maybach for her 19th birthday.

#BrodyJenner is being dragged in his comments after reposting and agreeing with a friends thoughts regarding the #KeithLamontScott shooting pic.twitter.com/fmGB6cQmYp 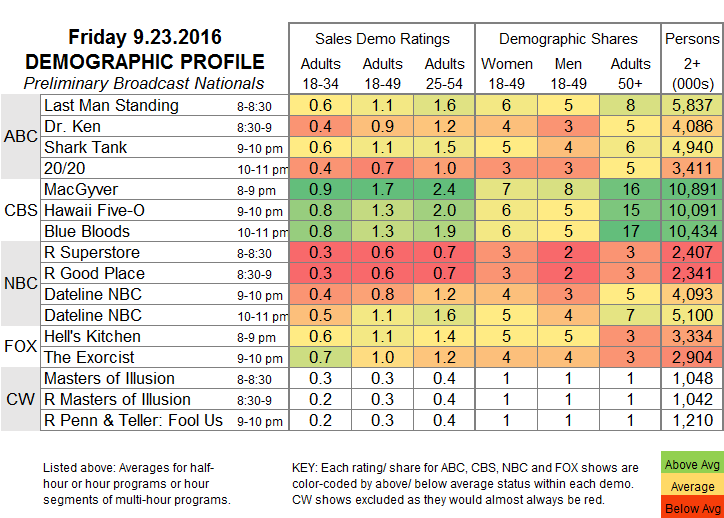 On Friday, two networks aired new reboot TV series. On a low rated night, CBS's MacGyver came out as the top rated show of the night. Although critics panned the series (22% approval rating on Rotten Tomatoes), viewers stills turned out to watch the reboot of the beloved popular 1980s TV series.
On the otherhand, FOX's The Exorcist, based on the film series, was much more favorably reviewed (71% approval rating), but it could not draw much of an audience.
src

I don't geddit @pottermore...all of my happiest memories are spent in the presence of cats. Why oh why is my Patronus a SALMON?!😟😑 #Patronus

The actress, book lover and aspiring cat took the recently released Pottermore Patronus test but didn't quite get what she expecto.

In case you're wondering: No, apparently you won't discover a Harambe Patronus on Pottermore.

I've been asked to make it clear that Harambe is not a Patronus you can actually get on @pottermore. The previous RT is a joke. As you were.

The queen of grunge recently posted this short advert on her Instagram staring her and her beautiful daughter Frances. It was shot for London Fashion Week.

Have you forgiven your mother for being a hot mess during your childhood?

Let's be honest, Russian people love to dress up, even if they need to take a garbage out they'll put on their best outfit so people don't see them wearing sweatpants and t-shirt. But when it comes to celebrities - it's all on another level of delusion and narcissism, Russian pop singers would buy a very expensive piece of fashion and wear it in a tragic way. Since I'm Russian myself, I've been seeing lots of it, so I'd love to share their fashion choices with my fellow ONTD members (my eye's doesn't have to be the only ones to witness such a beauty)

I obtained permission from copyright holders to post their photos 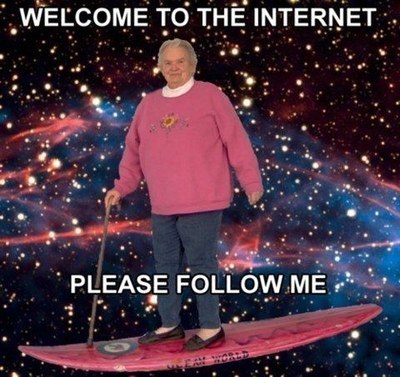 He was 24 years old and had just recently announced he was expecting a child with his girlfriend.


jofez16 I'm so glad you came into my life. I'm ready for where this journey is gonna take us together. #familyfirst

I cannot fucking believe this. I'm in total complete shock. He was such a talent fuck. RIP

TMZ has yet another round of updates on the Brangelina divorce/Brad Pitt incident:

- They are now reporting that there are inconsistencies to their initial story of Brad & Angelina fighting on the plane and Maddox leaping between them.

- TMZ now claims that though something happened on the plane, it is unclear whether or not

Source
What a mess for their kids.

The 5th Annual Global Citizen Festival 2016 took place in NYC's Central Park and was headlined by none other than ONTD's problematic fave and true Pop Queen Bad Gal Rih™.

- There were other people there too.

Hope everyone has a lovely Sunday, TYFYT!

Do you have a significant other ONTD? 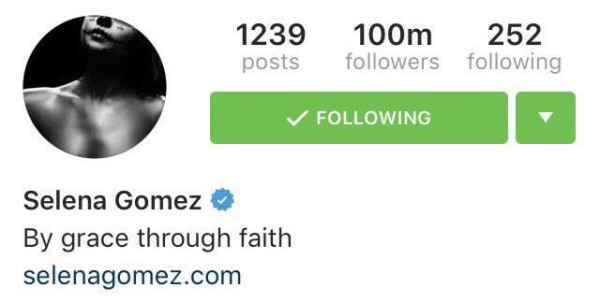 Along with being Insta's most followed user, she boasts the most liked photo & most viewed video!

Before y'all TRY IT, just know that JB & Taylor Swift's most liked photos are pics with Selegend.

@hollymadison: Tried to make one of those #3fictionalcharacters things, but it turned into more of a #HairGoals post than anything else. Irritated Hermione is totally my jam, though. No photo of Tiffani Fanelli from Luckiest Girl Alive exists so I gave up. 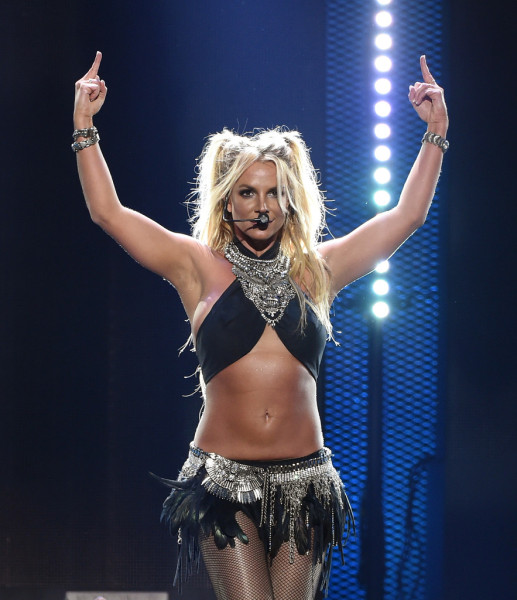 That Britney promo won't let up! The Princess of Pop opened the first day of the iHeartRadio Music Festival in Las Vegas with a special 30-minute performance which included hits like Work Bitch, Stronger, Slave 4 U as well as new bops from the best album of the year, Glory.

Joe Jonas and Demi Lovato got trapped in an elevator before their big show at L.A. Live on Sept. 22, and the exes had a lot of time to reconnect.

“We’ve been stuck in an elevator for four hours,” says Joe with a distraught look on his face, while Demi winces and mutters “Oh my god,” behind him.

Sense8's producer, Michael J. Straczynski denied the rumors of the show getting cancelled for one random actor.

Plus, one of the 13 doctors from 'Doctor who' has joined the show...

Would you request your age to be taken down ONTD? Do you think the bill will help stop ageism in Hollywood?

Eric Warner (Michael Ealy) is at the top of his game. Smart, well-educated and hardworking, he is the heir apparent to his family private equity firm in Charlotte, North Carolina. Newly married to “the one” and walking on air, Eric is flush with success, but all of that is about to change.
Who ultimately killed Kate? And what will people do to keep their most intimate, devastating indiscretions from ruining their lives? How well do you know your spouse? Father? Sister? Brother? The emotional rollercoaster ride is about to begin for Eric Warner. Did he or didn’t he kill Kate?

Listen to #Remedy by @FrankIero & The Patience AGAIN & AGAIN 👇 https://t.co/Xb9vp9ZFuR

Frank Iero and the Patience debuts "Remedy" on Radio 1 Rock Show this Sunday afternoon. This song is the second to debut from the record and follows "I'm a mess".

Tour dates for FIATP's upcoming tour can be seen below the cut.

p.s. Bullets is also available for stream and purchase at your local online retailer. bless warner bros for finally getting the rights to this album

THE FIRST SINGLE OFF OUR DEBUT ALBUM #DNCE IS COMING FOR YOU. BODY MOVES. 9/30. ONE WEEK. GET READY. pic.twitter.com/D9RbywO9gm

source
would you rather wear a pizza dress or a pasta dress, ontd?

The singer worked with an eclectic cast of songwriters and artists for the Heavy Entertainment Show record, his first since 2013’s Swings Both Ways, including longtime collaborator Guy Chambers and hit-making producer Stuart Price. Artists who co-wrote with the singer include Ed Sheeran, Rufus Wainwright, The Killers’ frontman Brandon Flowers and John Grant.

Williams said the album was inspired by his childhood memories of television.

ONTD, what is your favorite Robbie song? Can you even name one at all?

This video is fun imo. Joey is so cute

I'm not digging it, hope the rest of the album is better.

Rolling Stone will censor a woman's nipples, unless the woman is trans https://t.co/1zhVyvqHgS pic.twitter.com/AZO4wteQwT

Laura Jane Grace's ex-wife Heather Gabel criticized the Rolling Stone article on several points. Her biggest complaint was that the photo of Laura Jane's nipples were uncensored, whereas the magazine censors the nipples of the cis women that are profiled.

"Rolling Stone has never published a photograph of a non trans women’s nipples uncensored before, which, to me, reads as them making arbitrary distinctions between trans and non trans women, which is fucked up. Everyone’s tits should be legal. In my opinion, this is not a subversive decision aimed at giving censorship the middle finger, it’s a blatant example of misgendering, of gender inequality, and a general slap in the face to anyone who expects to have their gender identity respected." 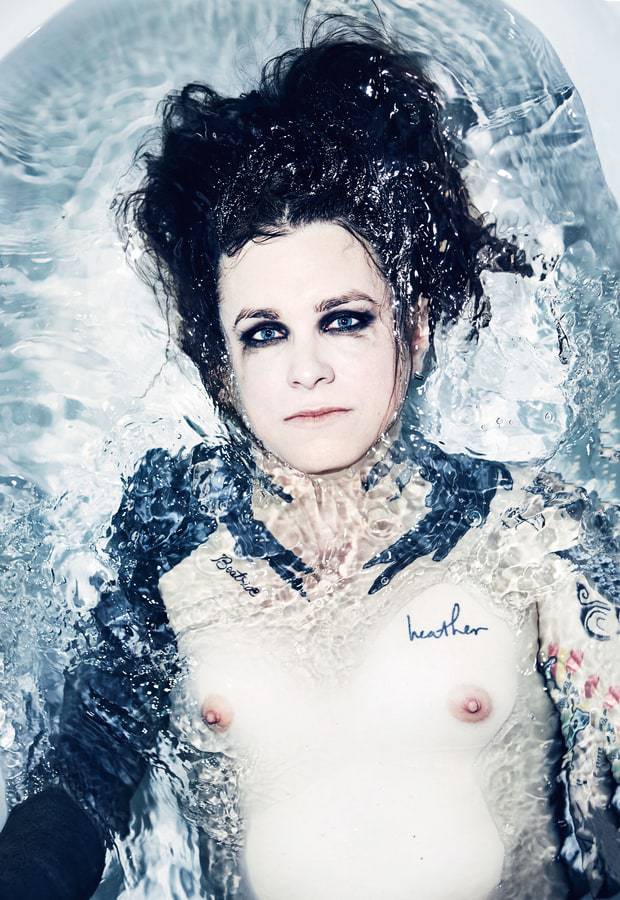 Do you still buy fashion magazines? Where do you get your ~fashion fix?


The new CIA recruits begin running counter-surveillance exercises at The Farm while Alex and Ryan navigate their new relationship with each other. In the future, Ryan and Raina try to disrupt the terrorists’ plan to blend in with hostages while trust becomes a deadly weapon, as not everyone is who they seem to be.

Just found an upload and this looks dumber than last season!! Alex better be hooking up with Shelby behind that potato's back tbh.

A Class act? He is! Peter Capaldi will be appearing in the Doctor Who spin-off: https://t.co/ACZ6Iijsh9 pic.twitter.com/ZU97Jd3pkQ

And the best news is that unlike Doctor Who, this show is Moffat-less, since he has minimal involvement with it. All Showrunning duties rely on Patrick Ness.

ONTD, will you be watching the moffat-less and lgbt-friendly 'Class'?

Love these guys! Check out their EP  "Sidda Mukyaalo," here.

He's wearing the Gucci denim coat that was supposedly inspired by Harry's tattoos. (Zarry is real)