7. The Hunchback of Notre Dame

what's your favorite movie from the 90's??

(And by cast, I mean the B-list characters on the show no one really cares about)

In the video, Jason Wahler (on/off relationship with Jesscah and then Lauren), Alex M. (got into it with Jessica over Jason), Taylor (who?), Morgan (only applied to one college), and Christina (horrendous Broadway addition) get together to play a game called "Real or Fake," where they confirm if certain storylines on Laguna Beach were real or not.

Takeaway points:
- People randomly come up to Morgan and start saying "Jess-cah" to her
- The epic Kristen/Ste-vaann Cabo fight was real!
- The love triangle was fake - Kristen and Stephen actually dated for a long time, but LC and Stephen were always just good friends
- Kristen's bad girl persona was real, but it was a product of her being manipulated by MTV producers
- When asked if Lo is a "good girl" like LC, everyone puts up a "Real" sign except for Christina, who puts up "Fake," only to awkwardly switch it when she realizes no one else put up "Fake"
- Morgan didn't really apply to only one college! What they showed was her rejection from BYU Hawaii, but she actually applied and got into BYU Utah where she ended up going
- Christina/Morgan's mini-feud with Lauren/Lo regarding not being invited to Christina's birthday party was fake
- Jason really kissed Jessica in front of Lauren at the fashion show
- Talan really loved Taylor

You can read the full complaint via Politico, but here's a few key points:

@deray thinking about you my brother and sending love and prayers to you and everyone fighting for justice. #FreeDeRay

Some things to expect:

Drama actress excerpts have been posted before, but not the whole thing(s).

It only took 9 years to make my first post here! I watched the videos late last night so some notes may be a bit off.

Lin-Manuel Miranda posted a picture of his chopped-off ponytail last night, following his final performance of Hamilton. See his new haircut after the cut:

Have you ever cut your hair after a breakup?

- Tinashe's new (lead?) single 'Super Love' is coming this friday, 7/15.
- The song is composed by the same team that did Rihanna's 'Umbrella' and Beyoncé's 'Single Ladies'.
- There's a rumour that the album is coming in September.

Plus Hiddleswift on a night out in Oz


Tom Hiddleston being interviewed in the Gold Coast and was asked about Taylor Swift. His answers: "I don't know". pic.twitter.com/l3vBPXv9Hf

Tom is in the Gold Coast with Taylor to shoot Thor: Ragnarok. They were last pictured having dinner Sunday night.


Taylor and Tom tonight out for dinner in the Gold Coast pic.twitter.com/uzqDjupmrW

( Collapse )
Second hand embarrassment for everyone in the video.

Is Kylie Jenner Trying To Make Everyone Think She is on a Honeymoon? https://t.co/BGl7VHSrwo pic.twitter.com/xvgBPiHGHW

Kylie and Chicken of The Sea are on a romantic weekend getaway that looks suspiciously like a honeymoon. She showed off a new diamond ring on her right hand that doesn't fit... Looks like she switched it from her ring finger.

Kylie also referred to him as "her husband" in a snap chat a few days ago.

I was exposed to many genres of music as a child and Rap/Hip Hop is definitely one of my favorites. I loved east coast, west coast, dirty south, even the midwest. It helped having an older brother who was deep into the hip hop culture of the mid-late 90s to expand my horizons. I've compiled a list of what I feel are some of the best rappers of the last 20 years.

I HAVE LEFT OUT 2PAC, BIGGIE, & NAS BECAUSE WE ALL KNOW THEY ARE GREAT.

How wrong are my rap faves, ONTD?

A reinvented Blink-182 with Matt Skiba of Alkaline Trio replacing Government Certified Alien Hunter Tom Delonge, have snagged their first #1 album in over 15 years after earning 186,000 in sales and streaming for the albums debut week.

After counting the votes, the results are in! Here are the best beach bodies according to you:

Pokémon Go's Wednesday launch on iOS and Android has proven a rousing success for franchise creator Nintendo and app developer Niantic, with the app rocketing (Team Rocketing?) up every major download and top-grossing chart. With arguably the biggest augmented-reality gaming audience ever in the West, the game is attracting a lot of attention, including good stock-related news for Nintendo—but it has also already proven ripe for exploitation of its players.

In particular, one major social aspect of the game—its "beacon" function—has already been taken advantage of in the city of O'Fallon, Missouri. That city's police department made a statement on Sunday morning confirming that a group of four armed men had used the app to lure victims to a specific place, at which point they mugged the unknowing Pokémon Go players.

Who's on your team, ONTO gym fans?

Good for her. Would hate to see her meet her end like Prince and MJ so I'm happy she's taking steps to get better!

We're getting our first look at Sofia Boutella as the Mummy https://t.co/k6uqi1Zar9 pic.twitter.com/xpIhdat7YI

I love female villains, I just don't like when they do this trope.

- Source tells E! that Tay and Tom are already talking about kids
- Tay likes Tom's "English ways"
- The squad approves of him
- Source says: "Tom gives Tay more attention than any other man she has ever been with. She likes his maturity. He...is a very romantic and charming gentleman."

They performed David Guetta's song "This One's For You", which features Zara and is the official song for EURO 2016.

In no particular order.

Kimberly Clark - Her Anti-Haul videos are everything and encourage you to save money. Too many channels focus on what's trendy and what you should buy. Kimberly puts things in perspective and reminds you that regular people don't need to buy that much makeup!

Ariana also posted this message on instagram:
During this challenging time, we have to remember that the only way we will progress is if the overruling force is #Love. “Music is a universal language that all of us can feel regardless of color lines, gender, sexuality, age, race, religion…. it unifies us. We believe we can not fight hate with hate, only love. Just as we can not fight darkness with more darkness. Only Light.” Too many precious lives were taken from us this week, this month, this year. Rest in peace #AltonSterling. Rest in peace #PhilandoCastile #BlackLivesMatter.
And the police that were peacefully guarding the #BlackLivesMatter rally in Dallas…. Rest in peace.
#LorneAhrens, #MichaelKrol, #MichaelJSmith, #BrentThompson & #PatrickZamarripa.

[Synopsis]Jesse protects his church in a vicious gun battle against Quincannon and the Meat Men; Tulip hopes to save a friend.

I keep forgetting to say this, but I love that Nathan Darrow plays John in the flashbacks. Also, [Spoiler (click to open)]damn, now we know what happened between Eugene and Tracy. Not sure how I feel about this change in his story, but he has been trying his best to make up for his sins... Still, brings the whole exchange between Jesse and Eugene in a different light. Damn. Cass and Tulip remain flawless. So, have you ever said things you've regretted?

Lana put together a little 70's girl group recently for her show in Belgium where two dancers/back up singers joined her on stage.

She even busted out some Spanish while performing Carmen!

Lana Del Rey reciting some words in Spanish during her performance of ‘Carmen’ at TW Classic Festival in Belgium. pic.twitter.com/pFva00ntug

what do you think ontd?? are you slayed by all this choreography?

Can you dig it?

Wendy Williams commented on rumors that Britney Spears would be the next Bachelorette.

Wendy said that Flava Flav and Bret Michaels weren't really looking for love when they did their reality shows, but she says that Britney is naive enough to actually think she'll find a husband on a dating show.

Wendy also said that Britney is very vulnerable and that men would probably take advantage of her and only use her for her fame and money.

Wendy says that only 20% of guys in the world would fall in love with Britney for her personality, while the other 80% would take advantage of her.

Wendy Williams said that Britney doesn't have the best judgment when it comes to a lot of things.

She continued, saying that although a lot of people have slipped up in life, they haven't shaved their heads or attacked cars with umbrellas.

How good is your judgment?

* “Taylor and Tom are not moving in together despite reports. They might as well be living together as they have been inseparable since they first started dating. They both are enjoying summer breaks from work which will be coming to an end soon."
* Tom’s next project has already begun shooting again in Australia (Thor: Ragnarok)
* Taylor has joined her beau down under at the Gold Coast
* "Taylor is trying not to think far into the future about what will happen with their relationship when Tom has to spend time on set. She is already talking to friends about the idea of spending a few months in Australia to be with her new man while he has to work. "
* Taylor will spends some time in Australia on writing and recording new music

FKA twigs looking stunning on the new issue of Elle US.
pic.twitter.com/RKVgNL3g9F

We have released the #mrrobot season_2.0 Premiere early, but it won't be here long. Watch while you can, friends. https://t.co/ztye2bhfVB

Shawn Mendes's Handwritten tour is showing no signs of slowing down, and he just announced that his new album, Illuminate, is headed our way in September. And while his new song, "Treat You Better," debuted in early June, Shawn already knows that one new track isn't enough. That's why he just released another song, "Ruin," (which he's been teasing live on tour).

The slow track builds to a wave of instrumentals and emotion as Shawn taps into what might just be his most John-Mayer-esque song ever. "Do I ever cross your mind?" he asks a former flame, while asserting that he's "not trying to ruin your happiness / but darling, don't you know that I'm the only one for you?"

Source
Paris has gotten over 20 tattoos since turning 18 in April. 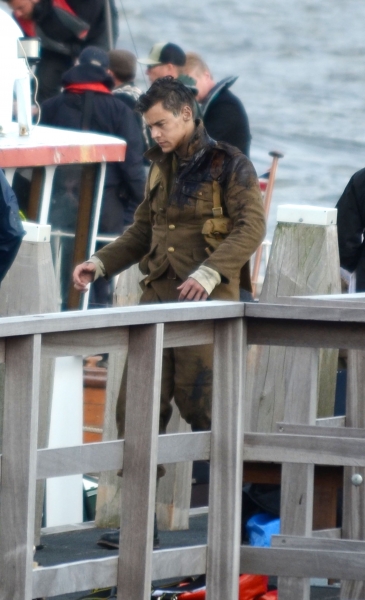 Harry Styles is in Urk, Netherlands to shoot scenes for Dunkirk. The movie, set to be released in July 2017, is expected to wrap up filming end of September.
( Collapse )

The Seoul Gangnam District Police stated that it was difficult to determine that there was force involved in the sex from the accounts given by the women, Yoochun, and witnesses, because there was no violence or threatening involved.

well deserved and 100% here for a team that includes three women of color!!!

Time and again we've fallen in love with a song and have inevitably built up that song to not only be asuccessful single, but to have an iconic video... Unfortunately, more often than not, we've been disappointed when the single performs well, but ends up getting a terrible video treatment.

The following is a list of songs in recent memory whose videos, in my opinion, ended up being less than spectacular:

OP Note: My first ONTD original! I hope it's okay! Mods, I think I did the cut right... I'm not sure.

ONTD, did I miss any videos?
Collapse