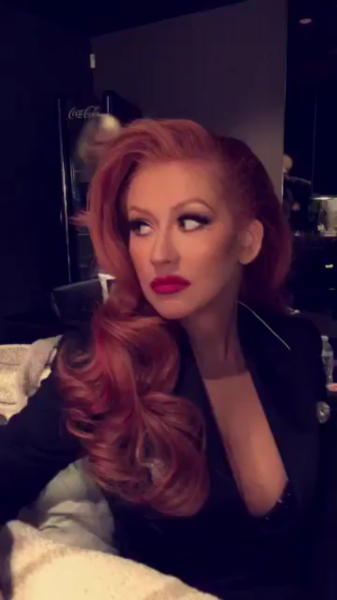 Tonight, Xtina's performing at Hillary Clinton's #ShesWithUs concert, and shared a glimpse of her new hair on Snapchat!

Who's ready for the Tonys on Sunday?!

Filming Make Me (ooh): Dancers getting it on a tractor

Britney's dancers on set of "Make Me" in Palmdale, CA today. pic.twitter.com/LZ7h7kDv7W

yes that's david lachapelle moaning in the background so the audio wouldn't leak.

ONTD, do you drink every time "the legendary silver crystal" is mentioned? I do, and Toei's gotta pay for a new liver tbh. Thoughts on this weeks episode?


Source 1, 2 and 3
Who plans on seeing Warcraft this weekend?

Potter fans have always had each other’s backs. Today I’m asking you to #KeepTheSecrets of #CursedChild https://t.co/0Vbl3zwN6b

"You've been amazing for years at keeping Harry Potter secrets so you didn't spoil the books for readers who came after you. So I'm asking you one more time to keep the secrets and let audiences enjoy Cursed Child with all the surprises that we've built into the story. Thank you."

ONTD, what was the worst spoiler a fellow Potter fan ever told you? [Spoiler! (click to open)]Snape kills Dumbledore, btw.

The pics were taken in 2010 in Winnipeg, Canada.

As of right now, they are still online.

It's being compared to Beyoncé wanting unflattering Superbowl pics to be removed from the internet.

With the help of Puerto Rico & the Virgin Islands, HRC has reached the majority necessary to officially be called as the Democratic presumptive candidate.

I'm thrilled to support this historic nomination. A great day for women, and hopefully just the first of many.

Nancy Pelosi has also endorsed her, and Obama's endorsement should be coming soon.

The #BETawards Prince tribute will feature Sheila E., the Roots, D'Angelo and others https://t.co/WHWf1qk3Ie

Prince will be honored at the 2016 BET Awards on Sunday, June 26th, with a special live performance by Sheila E., The Roots, D'Angelo, Janelle Monae and others.

findthewalkerHappy summer from the four of us.. I love you @kayascods

Individual covers and one more pic for each under the cut

( Collapse )
ELLE's Women in Comedy issue will be available June 21.

#TheMindyProject Exclusive: Chris Messina Returning for Season 5 But NOT as a Series Regular https://t.co/J82TS4Yytj pic.twitter.com/80P36FL7XC

After not appearing that much this season due to filming a movie, Chris Messina has been downgraded to recurring on The Mindy Project next season.


Source
Who else is ready for this?

The members of the group are Shyann Roberts, Kristal Lyndriette (was in girl group Richgirl), Brienna DeVlugt, Ashly Williams (was on X Factor season 3) and Gabrielle Carreiro

Catch the season finale on BET tonight at 7 PM PST/10 PM EST to see their first on stage choreographed performances in front of the label (LA Reid's Epic Records). Plus buy the song on iTunes https://itunes.apple.com/us/album/all-of-us-single/id1121383932?i=1121384017

- wrote a song about her love for black men and its called Jungle Fever and people got offended naturally
- she has black friends and they found it funny~ so its obviously okay
- "It's a song y'all...not to be taken seriously~"
- went out with some black guy to dinner and someone looked her up and down and then told him that he needs to get himself a good black woman~ and Trisha was SHOCKED.
- if it's a black woman with a white guy no one says anything but trisha gets criticized.
- compares being called snowbunny to her saying jungle fever
- every relationship with black guys she had didnt last cause of race and they never got past it~
- she feels she was born in the wrong race.. "culturally I'm a black person".
- someone asked her ex bf who is black hy he was attracted to this white bitch (her) &  he said "she's got a fat ass and big titties" which according to Trish is the usual white girl black guy relationship~

Meghan Trainor and Fifth Harmony, who both just had top 5 albums will BOTH be performing at the show. Also on tap is Iggy Azalea, Charlie Puth, Hailee Stanfield and The Chainsmokers! Media personality Chanel Omari will also be on hand!
SOURCE http://www.wbli.com/s/blisummerjam2016/

the frontrunners for a nomination according to Variety:

-Vixen will join the Legends as a series regular
-not Megalyn's version of the character, however, due to her filming schedule
-the show will introduce a new old Vixen who may have a tie to Mari McCabe
-Megalyn has the door open to guest on any of the four Arrowverse shows if/when her scheduling allows

An uprising. A struggle. An opportunity... but for whom? Watch a PREVIEW of the all new season of Tyrant. Premieres Wednesday, 7/6 on FX.

Our girls have been crowned Music Act of the Year at this years @GlamourMagUK Awards! 🎤👑🎶🙌🏽 #GlamourAwards LM HQ x pic.twitter.com/0Qeajwoksu

Its cute but like she needs to stop chanelling tumblr here. The song is actually good. The dancers are even better.
Her make-up actually looks good here fortunately.

Going through a phase where no questions will be asked. TYFYT.

No Bachelorette next week due to NBA finals

Megan Fox apparently has super human abilities, based on a new interview where she shares some theories. 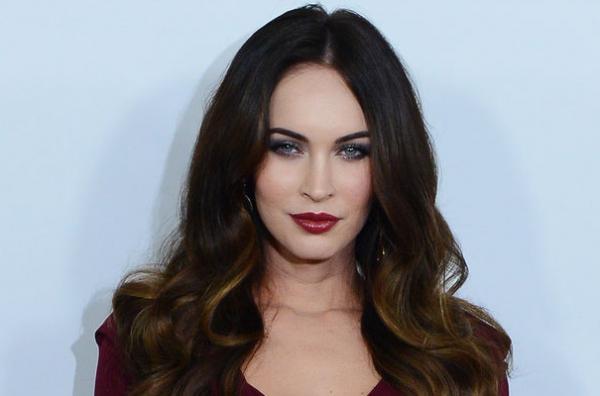 She told her mother she will become an actress, when she was 2.
“Sometimes I just know thing. I accidentally tap into stuff sometimes. I used to do it as a kid, and I do it as an adult. I crossed over and saw a future string [yes, string theory].”

She longs to explain the mysteries of the Universe for us...
“I’ve always been into alternative history, antiquities, archaeology. I’ve always been really consumed by these deep mysteries that exist on our planet that can’t be explained today by science. They eat away at me.

She thinks you people aren't ready for her super powers
“I think people, in general, are plebeians that are brainwashed by the type of media that they expose themselves to. It doesn't ... matter what I say, or how eloquent a speaker I may be, or how positive my intentions may be. I'm going to be made into what people desire me to be.”

Source
Do you have any psychic or special abilities, ONTD?

Can you believe that Rachel Crow is finally old enough to vote?


CMT and Lionsgate are near a deal to renew Nashville for a fifth season. An announcement could come during the CMT Awards tomorrow night.

In an interview with The Guardian, Mirren cited the "shameless women" like Kardashian and Pussy Riot as role models for a new, bigger definition of beauty thanks to their rejection of the label "slut."

Mirren admitted she wasn't a fan of the Kardashians, but admired their role in making big butts acceptable, saying, "it’s wonderful that you’re allowed to have a butt nowadays.

"Thanks to Madame Kardashian, and before her, J-Lo, we’re also allowed to have thighs now, which is great too. It’s very positive,” she said. “When I was growing up, it was thought to be unbelievably sluttish to even have a bra strap showing,” Mirren said. “Everything was about women conforming. I love shameless women. Shameless and proud!"

During an interview with Uproxx Wan said that during talks with DC he was given a choice between The Flash & Aquaman.</p>( Collapse )

Zlatan: "Paris has been missing me. It has been raining since I left & now I am back, it is sunny again."

the screenshot kills me omfg


source
what's your favourite Prince song, ONTD?
What will W make them do next?

Manny Machado DROPS Yordano Ventura after being hit by a pitch at Camden Yards. pic.twitter.com/9sJDoHDA67

Kansas City Royals pitcher Yordano Ventura was pitching inside all night to Baltimore Orioles shortstop Manny Machado. In the bottom of the 5th, Yordano got Machado in the ribs with a 99mph fastball, prompting the Orioles star to charge the mound and wop the pitcher in the face. The fight was quickly broken up and both players were ejected.

This is not Ventura's first time throwing hands in the diamond. Last year, he served a 7 game suspension for initiating a bench-clearing brawl between his team and the Chicago White Sox.

This is also the second MLB fight in the last month! Back in May, Toronto Blue Jay's Jose Bautista was decked in the face by Texas Ranger second baseman Rougned Odor after a dirty slide.

source + me & my general knowledge of baseball!

I am living for all this aggression. MOREEEEEEEEEEEE!!!!

Australian superstars 5 Seconds of Summer got hacked on their social media today right as they reached 9 million followers on Twitter, with members Michael and Ashton tweeting the fans warning them of what's to come.

Thus far the hackers haven't done anything problematic besides a tweet telling people to unfollow a specific fan account, so it seems the hacking is coming from their fanbase. The band made a video on Facebook for their fans thanking them for the Twitter following and talking about the hacking situation.

They also announced some work projects coming up, incuding a surprise for fans on June 16th, and lyrics from their new song (apparently a 'bop') that will be on the Ghostbusters soundtrack "Girls Talk Boys".

Are you ready for a new JL cartoon?

As Reese and Shaw race to catch up with Finch, he infiltrates a maximum-security government facility in a desperate mission which could mean the end for not only Samaritan, but for himself and The Machine as well, on PERSON OF INTEREST, Tuesday, June 14th on CBS

Second to last ep til the series finale :

-Copa is hosted in alphabetical order and because of World Cup and Olympic obligations, they were not able to host in 2015. It went to Chile.
-Brazil hosted it 4 times before, winning each time