NBC showed these at their upfronts presentation, but decided not to release them online. But somehow they leaked.

We never know when Rupert Grint has a new project in the bag – one day we’re going through a long news drought and another day he is spotted on set filming something new. Today, Rupert was spotted on set filming a new series called Sick Note. We know very little about this project at the moment so hopefully more information will become available soon.

Check out the pictures of Rupert (with a new haircut and wearing a snazzy suit) alongside costar Nick Frost: 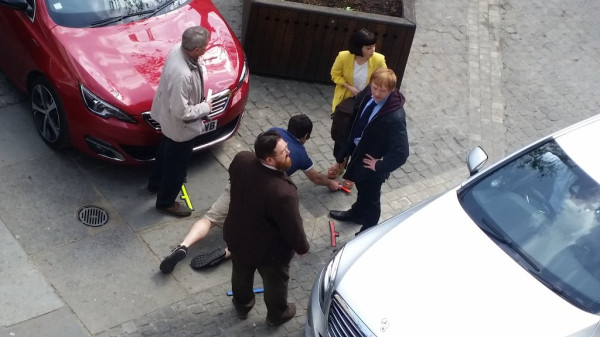 Fucking finally, the Ginger King is back!

#Nashies we are working hard to find a new home for your favorite show! Thank you for your support & keep tweeting #BringBackNashville 🎸🎤💞

As we all know, ABC cancelled Nashville, but Lionsgate is talking to other networks in order to get the show picked up for a fifth season, also fans of the show have been constantly tweeting and signing petitions to bring back the show

Ratings have (for the second time in recent memory) hit a SERIES low with a Live + Same Day rating of 0.70 in Adults 18-49 (share of 2), and 1.94 million viewers - marking this as the first time in the show's four seasons that Arrow has fallen below 2 million viewers.

Furthermore, Forbes contributor Erik Kain has branded the show a "hot mess", and asked that soul-searching question that keeps us all awake at night - can anything save it now?

Sources: Forbes, TV By The Numbers and Promo Pic.

He said: "For her to look at her butt and that little waist and to say, ‘L.A. face with an Oakland booty' doesn't that mean that the norm has changed, that the beautiful people have accepted our idea of beautiful? That's the way I took it"

"Now let me do this, as far as the critics are concerned: I don't want to come off like, ‘Oh, he's an Uncle Tom,' because I'm not. If what Blake Lively meant by that comment was, ‘Oh my goodness, I've gained weight, I look horrible,' if that's what she meant—and I doubt that she did—then I'm with the critics. But no one in the world is gonna tell me that a woman that wears that dress is thinking that she's fat. No, I'm sorry, it just doesn't happen. It sounds like to me like she was giving the line props. I think it's almost a nod of approval, and that was what I wanted. I wanted our idea of beautiful to be accepted. I think now not only is it accepted, but it's expected."
"
src: 1 | your fave

jennaushkowitz "I can not believe its been 7 years to the day that we premiered on TV. How time flies."

ONTD, when did you stop believin' watching?

Katy Perry is trending online after she delivered a slew of tragic performances yesterday at amfAR in Cannes.

Didn't hate it, but I will always cherish the closing dedication, “For Liv,” being met with a cry of “Fuck you Liv!”

Michael Keaton back in the mix for #SpiderMan 'Homecoming' villain (EXCLUSIVE) https://t.co/CGiq7mO83r pic.twitter.com/gPQ0hjjXmZ

An old foe comes back into the picture. Gilly  meets Sam’s  family. Arya faces a difficult choice. Jaime  faces off against the High Sparrow . Written by Bryan Cogman; directed by Jack Bender.
( Collapse )

For those of you, which lets be real is probably most of you, that are going "Who?" this post is a follow up to one made about a month ago regarding inappropriate behavior made by an actor who is best known for Cole on Supernatural... a four episode run in the series tenth season.

Since the initial post was made more allegations have come to light including inappropriate behavior with minor and him tracking down the personal information of several fans to send them C&Ds for speaking out about their personal experiences with him on social media.

As there are multiple accusations from several different people the story is a little long and hard to follow and is laid out on Storify for easy reading. However here are some additional highlights since the last post as this situation continues to snowball.

His stans have remained classy -

@blsedbx3 Okay. I'm taking it to the police, to lawyers, and to a victim's advocate, along with all my documentation. Thanks for the advise!

They responded to fans creating a petition to keep him away from cons by creating their own to make sure "fake fans" got banned.

The rabbit hole just gets deeper and deeper with more claims of inappropriate behavior, detective work going into his Social Media Management company allegedly not even being real, not shady but somewhat weird behavior like asking a crowd full of people if any of them were disabled so he could give them a present, and more.

Different and shorter than the one shown to the reporters and advertisers at the upfronts. Watch it before it gets taken down.

- When was the last time her hair looked like this in a movie? It's cute I guess.

Somehow, things got even worse...again on #The100. Our finale recap is out: https://t.co/BgdaBRgYUN @cwthe100 pic.twitter.com/fkVN5rZfc4

Did you watch the episode,ONTD ? Will you be there next season?

THE LAST FACE a shoo-in to win the Face Palme. #Cannes2016

- Playing brothers
- Set in 2010 in Minnesota (few years after Fargo S1)
- Official character description : "Emmit Stussy is the Parking Lot King of Minnesota. A handsome, self-made real estate mogul and family man, Emmit sees himself as an American success story. His slightly younger brother, Ray Stussy, on the other hand is more of a cautionary tale. Balding, pot-bellied, Ray is the kind of guy who peaked in high school. Now a parole officer, Ray has a huge chip on his shoulder about the hand he’s been dealt, and he blames his brother, Emmit, for his misfortunes."
- Noah Hawley hints at least one returning character from a previous season.

Excited for this! What returning character(s) would you like to see?

Bob agrees to open up the restaurant at midnight to accommodate two chefs and their staff.

Louise explains to Tina that she misreads situations sometimes.

JYPE's Official Statement: “We cheer on Jia and wish for more success in her future as we’ve been with each other for a long time. We have finished renewing Fei‘s contract and we will support her to the best of our abilities in her Chinese and Korean activities. Suzy and Min’s contracts have their terms left. Miss A will remain together and they will mostly revolve around solo activities.” (OP: aka mostly focus on Suzy as usual)

Any Miss A fans here? What was your reaction?

Fifth Harmony will hit the road this summer in support of 7/27, the “Work From Home” singers announced Friday.

The 30-plus date trek kicks off July 27, stretching across North America with stops in Chicago, Toronto, New York, and Las Vegas.

ONTD, will you purchase tickets when they are inevitably slashed in half because 5H can't sell out 12,000+ seat venues?

idk i cant really relate to this song but it penerated my iced up heart.
ONTD, did Delta penerate you?

- Believes Drake is just riding the hot dancehall wave since it's become popular in the mainstream again.
- He calls Drake fake.
- If you check the billboard charts there are 8-9 dancehall influenced tracks.
- Questions why Drake hasn't done a song with big dancehall artists he admires like Mavado or Popcaan (He doesn't count Controlla since Drake cut Popcaan out completely of the album version).

Scott Disick's drinking has been causing him health issues not limited to his mental health.

A source told Us Weekly, "He's been sick for awhile, and his drinking is making it worse. He's been told numerous times that if he doesn’t stop, he’ll need a liver transplant or dialysis."

Scott has been spotted partying on several occasions recently.

They document it by each decade. Britney is the 90s. check out which other stars were included.


Britney's App is a hit

Check out these TV co-stars who couldn't stand each other! https://t.co/PJGGBRxOoi


The pastel majesty of "All in the Name"

Sources:
Graphic Designer's Twitter
@Brightlightx2 Youtube
ShowsLive YouTube
I heard it this morning and was kind of meh at first, but it's stuck with me all day, such an earworm, and have listened to it like 10 times. I also have an inappropriate crush on him, so I apologize for my enthusiasm.

He still flops after all these years, netflix needs to bring it back Gilmore Girls style

two celine posts in one week, aren't you lucky

Tell me your favorite covers ONTD

around the 6:00 mark
- Adele embodies the "real woman"~ and this is the year of body acceptance/embracing different body types so she'll likely win
- Adele doesnt have to wear a bodysuit to sell music
- Would rather see Beyonce live rather than Adele
- Adele and Beyonce arent in the same category
- Adele had 16 producers/writers on her album and Beyonce had almost 100 (LOL)

Do you prefer to listen to skinny artists, ONTD?

Kitsch is set to next film Xavier Dolan's 'The Death and Life of John F. Donovan' with Jessica Chastain, Natalie Portman and Kit Harington and will also make his directorial debut as he films his own feature film, 'Pieces' this summer.

Taylor was also spotted in Paris this past week with his rumored girlfriend Rachel McAdams.

[Recap]-It was basically 2 hours of the Grimm gang vs Black Claw and the Bonaparte guy.
-They killed Meisner (fuck you very much Grimm).
-Eve fought Bonaparte and got stuck with glass almost killing her again. Nick healed her with the healing stick so much so that she turned back into Juliette.
-Rosalie is pregnant with another Wesen baby (that makes 3 so in about 15 years from now they will reboot this show with them). They are stuck in a tunnel that goes nowhere trying to escape from Black Claw.
-Wu went all badass Wolf on a few guys but they didn't say what happened to him and Hank.
-Diana (Renard's & Juliet's antichrist baby) went all voodood priestess a few times lastly making Renard kill Bonaparte before he could kill Nick. To Be Continued next season sometime next season with only 13 episodes (winter of 2017?)

Here is my little list of songs that came out 10 years ago, hope you liked it. ♥

what have they done to my Idris...
Source

SOURCE
Quite rich coming from an overpaid B list movie star