On February 13th 2016, Viola Davis and her husband, Julius Tennon renewed their wedding vows. They've been married for 12 years.

"We are most alive when we're in love." -John Updike Happy Valentine's Day! pic.twitter.com/N7bV3DglOy

Octavia Spencer (The Help), Karla Souza, Jack Falahee, and Asher Matt McGorry (from How to Get Away with Murder) shared some photos on Twitter and Instagram, the day of the wedding. From the looks of it, guests were dressed in white.
( Collapse )

The first in a series of shorts that will air on Disney XD starting with the episode "Poe Dameron to the Rescue" and will premiere Monday February 15th at 8 pm after the Gravity Falls finale (cries). Future episodes will have Finn, Rey, Maz Katana, and Han Solo.

Praising Taylor Swift got this music journalist inside access to the early days of the #squad, but after giving TSift a middling review of the 1989 Tour, the blacklisting started to manifest. Music moguls, journalists and other Hollywood elite would contact the journalist-- all off the record-- to tell their own tales of horror of the TSwiftmachine's wrath.

Taylor Swift wanted the validation of the music industry... and if you weren't going to give it to her, you wouldn't get access to her at all.

Do you think Taylor is a media robot not seen since the rise of Beyonce, ONTD?

Will she be taking home her second album of the year tomorrow?

I thought the show would really pick up after announcing these would be the final batch of episodes, but I didn't really care for this episode. What is it with the writers trying to make Diane someone she is SO obviously not? Petty? Close-minded? Short-sighted? Kinda racist? Ugh. Also, you'd think Julianna, as a producer, would request a cuter wig.

What did you think of tonight's episode, ONTD? Are you sad or relieved this season is the last?

ELLE: You're dating a 19-year-old. I have to ask, what do you talk about?
CAVILL: Everything. People say age is just a number. It's actually real and true sign of someone's maturity. But in this case, she's fantastic.

ELLE: But you understand the knee-jerk reaction to her age, right?
CAVILL: It's a natural reaction. But, when I was 19-year-old, I was going out with a 32-year-old.

ELLE: Really? What did she teach you?
CAVILL: Things I can't mention in an article.

ELLE: Have you ever been intimidated by a woman?
CAVILL: (...) When I met my girlfriend, I was super intimidated. I wanted to impress her. I was thinking, Don't mess this up, man. You've gotta play your cards exactly right.

ONTD, would you let Henry teach your daughter some new tricks?

⚡ @AdamLambert and @JackAntonoff close out the night with a David Bowie tribute of "Let's Dance" #PreGRAMMYGala ⚡ pic.twitter.com/OJPxEq7h45

Jesus Christ hit the studio probably to record demos for other artists to bless us with a glimpse of vocals that is still better than all your favs and most definitely better than other boybanders. Solo music from Harry Styles or Zayn Malik? Liam Payne? Niall Horan? How about #SOLOJC2K16???

39 year old JC also attended the #PreGRAMMYGala looking the same age as other attendees and recording artists like Harry Styles! 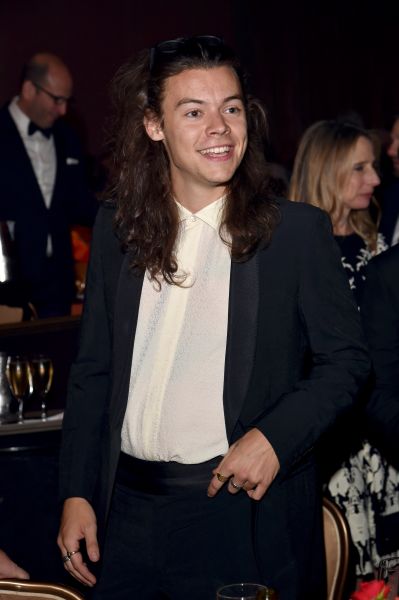 Which boybander's solo success are you rooting for?

He got to meet his queen Angela Bassett! I think we were all excited for this when we saw Angela was attending. and

Angela: yes I heard you were talking about me John: yep. I was asked who was my celebrity crush and I said you. (John went on to say many things glorifying the queen) #beauty

A photo posted by @john_boyega on

♫out of all the bussy, you're my favourite♪

ONTD, what is your fav male objectifying music video?

Rumors have been that she'll be performing an ANTI medley. Someone who saw Rihanna rehearse tweeted:

not getting my hopes up but...

hopefully it's a "Work" / "Kiss it Better" medley tho.

Stepping out with my Valentine of almost 30 yrs! #iovinewedding

Songstress Mariah Carey recently appeared on Dutch talk show RTL Late Night. At one point in the interview, the host confessed that "his ultimate dream as a singer was to have the chance to sing one line" with Mariah Carey. A disaffected Carey had barely responded "Oh my goodness," before the host broke into Carey's 1997 #1 platinum single, "My All."

Notable bits from the interview:

-Xena returns April 13th
-Synopsis of the new comic series:
After the Twilight of the Gods, the world is precariously uncertain - and Xena and Gabrielle have been missing from it for twenty-five years. Even without Livia, the power of Rome is growing: Caesar is determined to conquer by lies what he can't conquer by force, and the people at its edges know what's coming. (All roads lead to Rome, and Rome is hunting.) Xena and Gabrielle scramble to stop him before they have to wage war against a man they once called a friend. But along the way, Xena will have to confront her past against a rogue band of women warriors, and Gabrielle, whose secret visions are becoming prophecy, will have to protect Xena - at any cost.

Blac has reportedly been helping him battle his fat ass issues by encouraging him to live a healthier lifestyle and even make amends with his family. Kanye: Blac Chyna fuckin' Rob, help him with the weight.

did you get the D last nite ONTD?

-The actor's face was seen like it got some fillers/botox recently at the BAFTAS.

-Rumorhasit.mp4 that Tom is allegedly casting his next wife so he is trying to look extra good for her

smh he looked like a fine AF daddy a month or two ago in those candids.

Mariah Carey celebrated Valentine's day at the Caesars Palace in Las Vegas, where she performed before Australian fiancé James Packer. Yet on Instagram the singer appeared hesitant as the couple shared an awkward kiss. In the photo the pair's lips are not quite touching and while James has his hands on Mariah's hips she isn't touching him. What do you think?

Tonight is GRAMMY night. Let's look back on our fave's best and worst looks*!

Man thank you so so so much everyone for signing up to Tidal. Tidal is now the number one app in the world!!! pic.twitter.com/O3r9DkX03R

...on another note, can brah be the girl verson of bruh???

Madonna took a break from her world tour to promote her skin care line in Tokyo.

ARE YOU EXCITED, ONTD?!

Several observers, including Guardians of the Galaxy director James Gunn are analyzing the success of Deadpool and what it could mean for future superhero movies:

- James Gunn fears Hollywood will take away the wrong lesson from its success - trying to replicate its tone rather than embracing something new, which is why he believes the film was successful.
- Birth.Movies.Death has an article suggesting that it should be a wake-up call to Fox - that they should change their approach to the comic book movies to better fit the tone of the actual comics - which it claims Deadpool does well, but the X-Men films continue not to do. It also suggests WB may be concerned that the success of Deadpool signifies exhaustion with dark and grim superhero films.
- TheWrap wrote about how Deadpool's success will likely lead to more R-rated superhero movies.
- Vox has an article about how its success makes a good argument for an X-Force film.

Give me this mess now


'sup mod, the image is not hotlinked, I uploaded it here and linked the original url for copyright protection

The Queen of Vegas didn't mince words whilst delcaring what she was craving during her Valentine's day show last night.


How was your Valentine's Day, ontd?

Are you basic? Don't lie.

What's happening to Kanye? Which woman put a domination spell on him? He's losing his mind. Looks like Santa Marta's Work.

Ontd, have you ever been victim of brujeria? have you done some? is Santa Marta ur new fave?
Brujeria post?
Brujeria = witchcraft /sorcery

-Disney remade the 1987 superior film, Adventures in Babysitting.
-It stars Girl Meets World's Sabrina Carpenter and The Descendants' Sofia Carson.
-The plot is basically the same, just updated with typical shit like cell phones, social media, etc. When Lola and Jenny accidentally switch phones, Lola accepts a babysitting job for Jenny. Unfortunately, the four kids they signed up to babysit aren’t easy to keep their eyes on. So, naturally, one of the kids goes missing. And from there, things get hairy.

- The two were spotted in a Brooklyn bar eating mac 'n' cheese, fried chicken and nachos
- "They looked like really good friends"

"When I was younger,when I was 14, I was told by a drama teacher that I might do OK if I was happy to settle for the fat girl parts. So what I always feel in these moments is that any young woman who has ever been put down by a teacher, by a friend, by even a parent, just don't listen to any of it, because that's what I did – I kept on going and I overcame my fears and got over my insecurities​."

PEEP THE COMMENTS FROM PAGE 20+ FOR THE REST!
SOURCE/source

The promo editors have always been master manipulators, but the next half of the season looks gooood. Who knew this head of cauliflower could deliever? (lbr, it's the girls doing the heavy lifting)

BAFTA host Stephen Fry was criticised for allegedly taking a cheap shot at Mad Max: Fury Road costume designer and good friend Jenny Beaven. He joked that only one of the great cinematic costume designers would come to the awards ceremony dressed like a bag lady. The viewing public didn't take the joke lightly and demanded he apologise. Stephen took to Twitter to defend himself before deleting his account.

So just a word to the tragic figures who think calling Jenny Bevan a bag lady was an insult. She's a dear friend and she got it. Derrr

Will all you sanctimonious fuckers fuck the fuck off Jenny Beavan is a friend and joshing is legitimate. Christ I want to leave the planet

He even retweeted messages of support.

Drop streams for your fellow ONTD'ers!

- Has bronchitis
- went through rehearsal twice, but decided to not walk the red carpet


- Recently uncovered 74 pg court documents allege that Peyton Manning, his father and the University of Tennessee covered up a sexual assault scandal to protect Manning's burgeoning football career whilst ruining his victim's career and other's in the process

but I need access to more money in order to bring more beautiful ideas to the world.

People wanted me to tweet again well here's some tweets!!!

i loved the finale! but i'm still sad it's over

Last Monday it was announced that Kylie Jenner would be the new face of Puma, which prompted Kanye west to go on a Twitter rant the next day saying that there would "never be a Kylie Puma anything" because she was loyal to his own shoe brand.

Today it was confirmed that the deal is still taking place and that Kylie has already shot several photo shoots for the collaboration.

The piano mics fell on to the piano strings, that's what the guitar sound was. It made it sound out of tune. Shit happens. X

Because of it though... I'm treating myself to an in n out. So maybe it was worth it.

Watch Adele struggle through sound issues to deliver determined "All I Ask" at #GRAMMYs https://t.co/tKDtWSXaW0 pic.twitter.com/LrDPhMa5Ke

yikes, that prob threw off her whole performance. she sounded good at first.

Full first part of the special.

Missing the #GRAMMYs? Wanna know what else is coming up? Our full list:https://t.co/e6DTkBblU9 #Grammys2016 pic.twitter.com/7vcXc43D9V

Vanity, the lead singer of Vanity 6, probably best known for the song "Nasty Girl" has died at the age of 57 after battling kidney disease for many years.  In the 90's she became born-again, quit show business, and disavowed all of her previous work.

Lauryn is the friend who says "I'm almost there" when she's still at home.