- Disney is moving forward with a sequel to 'Maleficent'.
- The budget of 'Maleficent' was $180 million, after the release it
brought in $758+ million worldwide.
- Linda Woolverton ("Beauty and the Beast" "The Lion King") will write the sequel.
- Angelina Jolie is expected to reprise her role as Maleficent.

Video coming soon! Just tryin to make it perfect for all of you ❤🌹❤🌹❤🌹❤🌹❤😄❤😓❤😁 we are hard werking bitches! #bitchimmadonna

If you want to watch a good dragging, look no further. My favorite part was the first segment, which wasn't uploaded on YouTube but you can find it at the full episode link!

You can watch the full episode here.

- HBO tweeted out the first image.
- kerry washing will be playing anita hill in the movie "confirmation". the movie is about the 1991 Clarence Thomas Supreme Court nomination hearings. hill testified at said hearings.
- the cast includes: jennifer hudson, cobie smulders, and alison wright.
- the director is rick famuyiwa, who's movie dope is set to come out this weekend

A 13 year old girl was singing for a charity fundraiser at a mall in Canada. Ed was there an heard her. He decided to come up on stage and surprise her.
( Collapse )
SOURCES: 1, 2

Some Kingsman stuff for the release of the movie in Digital HD, Blu-ray and DVD

- confirms he's currently writing the sequel
- "If I think I can get the script good enough, then we are making it. We are doing our damndest to make that happen."
- hinted that there might be a new addition to the Kingsman team, alluding to an American agent appearing in the (proposed) sequel

- Colin is a bonafide of ladies man
- thinks lakes are good in wooing girls coz there's an opportunity to do Mr Darcy
- Snog, Marry, Avoid question on Jason Bourne, James Bond and Eggsy (his reasoning are hilarious tbh)

Since Hugh Jackman finally retired from playing the iconic character, there are questions on who will chosen to play the character in the future. Taron Egerton, who was rumored to play Cyclops in X-Men: Apocalypse before the role went to Tye Sheridan, answered the question on whether he ever considered playing the role.

-they are going to close 175 of their 675 stores, mostly in the U.S.
-they are also going to eliminate 250 corporate jobs
-they are trying to restore the brand after being surpassed by H&M and other cheap fashion chains
-they expect that these cuts will save the company $25 million annually
-the Gap-owned Old Navy chain continues to do very well

When was the last time you purchased something from Gap?

Showtime and Sky Atlantic have renewed Penny Dreadful for a third season, set to air next year and comprised of nine episodes.

* Colin Trevorrow’s Jurassic Park sequel grossed $208,806,270 in the opening weekend, just enough to overtake Joss Whedon’s The Avengers‘ $207.4 million record from 2012.
* The artwork above was created by Andy Park, the world famous artist from Marvel Studios’ visual development team who has been very very responsible for the awesome look of the Marvel films.

Chris Brown -- Back Off Groupies ... My Bus Is a No Ratchet Zone http://t.co/zYdKRXM54T

if you're broke ass porsha, need not apply 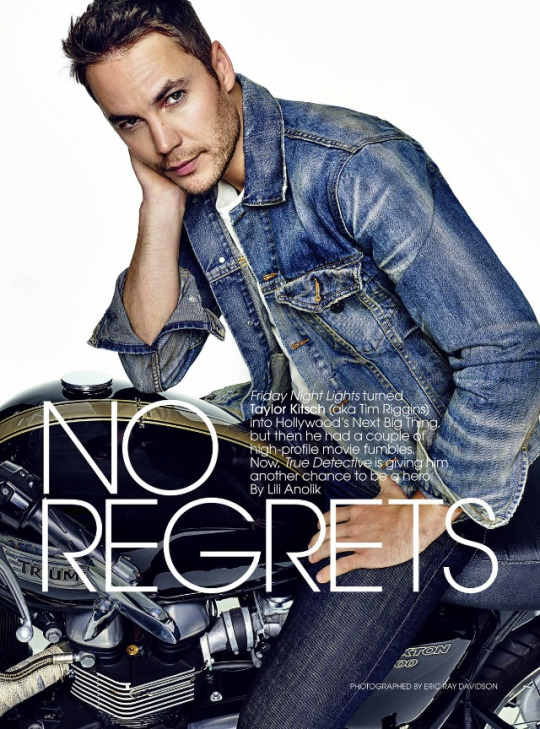 On filming True Detective, which premieres Sunday, June 21st: “I didn’t know True was going to be near as emotional. This season – fuck. I could feel Paul seeping into me. I’d be doing something or acting a certain way and think, 'Oh, this isn’t me.'”

Nic Pizzolatto on casting Taylor Kitsch as motorcycle cop, Paul Woodrugh: "“Woodrugh is very internalized and required a performer capable of conveying difficult and contradictory emotions within an outwardly stoic façade. Kitsch is believably tough and resourceful and hard while remaining vulnerable, sensitive, and empathetic. It’s that mixture of hardness and softness and native authenticity that really captivated me.”

On shunning the Hollywood life and living in Austin, Texas and the lack of dirt about his personal life in the media: “It’s great, isn’t it?” Still, the job does a number on his personal life. Says Kitsch, who’s currently single, “You sacrifice so fuckin’ much [as an actor]. How do you build a relationship with a gal and then tell her, ‘Hey, I gotta do press all over the world. I expect you to have the same feelings you have now in eight weeks.’ And that’s not me playing the violin. It’s my choice. But it better be worth sacrificing for.”

Nintendo did their thing at E3 this year, so here's some trailers for some of their up-coming titles.

-Audrey Middleton...was born Adam.
-she plans to use the program as a showcase ... similar to what Caitlyn Jenner has been doing
-grew up in a small Georgia town as a boy
-transitioned several years ago
-her family had a hard time accepting it, but they're now fully supportive
-25-years-old, inspired by Caitlyn Jenner's story, but also just a big fan of "Big Brother"

Get your first look at the #BB17 HGs! http://t.co/OtFcQh8nOP pic.twitter.com/JvYOYaMyfM

-Lamar Odom's best friend who appeared on Khloe & Lamar & KUWTK died of a drug overdose at 37. He was also in the video where Lamar was rapping about cheating on Khloe.
-Both Khloe & Malika acknowledged Jamie's death on Instagram.
-He and Lamar had hit a rough patch in their friendship.
-Lamar is shaken up by his death and now the Kardashians are scared it might lead him to binge on drugs to cope.
-Lamar is dealing with the tragedy by surrounding himself with friends in Vegas.
-Another source says that this was a wake up call since he realizes this could've been him.

Jamie xx has also announced some additional dates for his In Colour tour:

Saw him at Coachella this year, and I'm dying to see him again. His new album has also been on repeat for about a month now. So glad he added a Toronto date to the tour!

"Ye dozed off during the Frozen sing-along portion of the birthday party."

Nothing new to say about Kit Snow, but this is confirmation about other character fates from the finale since the cutaways and editing really liked to be ambigious.

OTT music aside, everyone is looking qt

A film based on Steve Alten’s New York Times bestselling novel Meg has been in development for almost 20 years, but the mega-shark film is just now making its way to the big screen.

Roth has signed on to direct Meg, based on Alten’s book Meg: A Novel of Deep Terror. It centers on a Navy deep-sea submersible pilot named Jonas Taylor, and his terrifying encounter with a predator long believed to be extinct: a 70-foot, 60,000 pound shark. Meg is, of course, short for “megalodon.”

source + 2 + 3
who's still in denial and what are your theories for the possible second coming?

What was your reaction upon reading the script for the finale?

I was really excited to take this character of privilege and denial and break her down a little… although I don't think Cersei can ever truly be broken.

What is going through her mind during her confession?

She just wants to get out, by whatever means. She wants to see her son, to see that he's OK. To make sure Margaery is still locked up. To make sure everything is as she intended. To see if Jaime has Myrcella.

despite the bad cgi at some parts, i thought lena gave an incredible performance. she deserves an Emmy nom this season IMO.

This pic of @selenagomez captures everything wrong with Hollywood's sexist standards http://t.co/Vc7MqNVrbL

-Selena Gomez, Kevin James & Adam Sandler made an appearance at the Hotel Transylvania 2 photo call
-Selena Gomez wore a two piece outfit with high slit. Yahoo says Gomez seemed uncomfortable in the outfit, grabbing at the slit & using her arm to cover her leg.
-Yahoo says the media would've torn her apart if she showed up dressed in sweat shorts and a t-shirt like Sandler & James.

Watkins Family Hour is a bluegrass/folk collective that is collaborating with FIona Apple.

They've announced a bunch of US tour dates, including Fiona Apple, which you can view HERE.

On August 8th, Fiona Apple and Watkins Family Hour will be covering Bob Dylan's Highway 61 Revisited in a free concert in NYC.

Related to THIS post. Check it out for more of their music.

If you get the chance to see Fiona live, don't pass it up! She is incredible. Definitely ranks in the Top-3 of live performances I've seen. 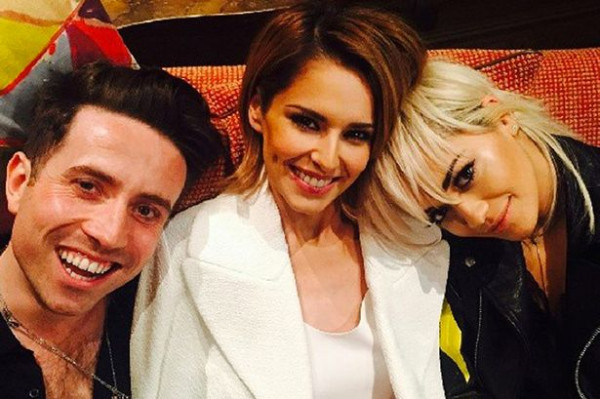 -Louis Walsh will not be coming back on the next season of The X-Factor.

-His replacements are Rita Ora and Nick Grimshaw who join Cheryl Fernandez-Versini and Simon Cowell on the judging panel.

-Rita Ora quits her judging job on The Voice BBC in order to get that Simon Cowell's paycheck. Interestingly, in 2012 before joining The Voice, Rita has made comments saying how she prefers The Voice to The X-Factor because "It is well received by other artists" and that she "respected the format and how it musically connected to the contestants" while she "don't really know how X-Factor works".

( Collapse )
Ok VH1, fans have been waiting for a year so they might as well wait some more, I guess.
I don't think I even remember the storyline anymore
source, 2

A spellbinding but naturally beautiful Eau de Parfum, Gold Magic is the debut fragrance by Little Mix. Surprisingly understated yet complex, it’s a true reflection of the band and the irresistible chemistry between them. For more info visit the web

Will you buy this surprisingly understated yet complex perfume so that LM don't go flying on their golden broomstick into another celebrity flop fragance, ONTD?

After lying to Alison and Jason about Charles, Kenneth comes clean about the family’s connection to the young boy. While he won’t give much detail about Charles’ past, he says enough to give the PLLs a clue of where to look for the missing pieces – Radley Sanitarium. With Radley now closed and the files shipped off to be shredded, the girls must act fast before all traces of Charles’ past disappear.

ONTD, are you liking this season?

Abandon All Hope: Fans of this young singer are hoping that he is changing his mind http://t.co/apg14NbnpS

-I think it's obvious who this is about. The article is short but for the lazy people, it's basically saying the member was fired for drug use & drama.

ONTD, have you ever been fired for your excessive drug use?

worth it is now the most played song on spotify by a girl group!

Lawrence, considered a top star and an Oscar winner, is getting an exceptional $20 million against 30 percent of the profit after the movie breaks even, say sources.

Britney hanging with her niece Lexie and sons over the weekend