omg so sad to hear about the #Amtrak accident... :( I SAT IN THAT SAME TRAIN YESTERDAY FROM PHILLY TO NEW YORK.....

YAY for Stana! Also, WTF? This should be the last season.

So excited!!! This is going to be the show I've always dreamed of creating. Tickets on sale Sat, May 16. #JLoVegas https://t.co/fEnh6mWjSi

who will be next in securing a residency?

According to Variety, Eddie Redmayne is now officially in talks to play Newt Scamander, the "magizooligist" in J.K. Rowling's Fantastic Beasts and Where to Find Them. Rowling has turned in the script and Redmayne is "very happy with what he has read."

Set in New York roughly 70 years before the start of Harry Potter, Fantastic Beasts is based on the Hogwarts textbook of the same name. The author travels around the world collecting material for his book. The film will also include four other main characters: two American girls and two American boys.

David Yates, who sucked the life out of every HP movie he directed, will unfortunately be back for this movie.

Based on Jeong's life as a doctor before he changed professions and became a comedian.

Tyga -- Blac Chyna's Just Bitter She Can't Have Me! http://t.co/MSCAKSo9EE

just a mess all around

Neve Campbell answered a few questions for Scream fans at a screening of Scream at the Alamo Drafthouse during her appearance at last week's Texas Frightmare Weekend.

Neve Campbell reunited with Scream co-star Skeet Ulrich (Neve and Skeet also reunited with Rachel True, of The Craft, which was filmed 20 years ago this year) last weekend for Texas Frightmare Weekend. The decision of attending the convention comes after Scream Queen veterans, Jamie Lee Curtis and Sigourney Weaver, made their first appearances at past horror conventions. Malcolm Mcdowell, Neve's co-star in 2003's The Company, persuaded Neve to attend the convention.

After the Alamo Drafthouse screening she talked about the impact of Scream and her character, Sidney Prescott. One of the questions asked pertained to MTV's upcoming Scream tv show.

Neve admitted she's unsure about the future of the original Scream series. She has not paid much attention to the production of the tv series, given she's raising a 2 year old. She even asked the audience if the show already premiered.

"I'm very curious to see what happens. I think MTV is the perfect place for it. It's going to be interesting to see... you get to see a completely new cast... I'm not sure how far they'll go with it, but we'll see," she said.

When asked if she would do a cameo, she said there was talk of it, but she would have to watch the show first before making a decision. "If it's good, I'll do it," she said playfully, almost jokingly.

She will make another appearance with Skeet at Monster-Mania Con 31 (July 31-August 2 in Cherry Hill, NJ). 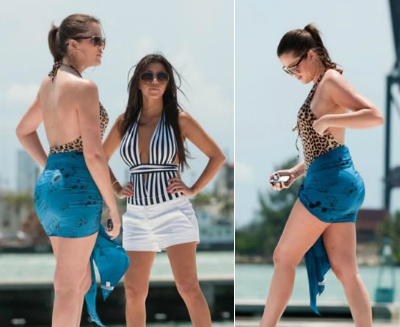 + Diego Luna has landed a lead role alongside Felicity Jones and Riz Ahmed, with Ben Mendelsohn set to star as the film’s primary villain.

One housemate was instantly evicted on the premiere of Big Brother: Timebomb

Do you think these songs will go Top 10?

For the first time in 25 years, some of Nintendo's biggest fans will get to go head-to-head in a gaming showdown for the ages. Join a worldwide audience by watching the live stream on Sunday, June 14.

The qualifying competitions for the championship begin May 30. No details yet, but they'll be posted pretty soon at the source below.

Which of you nerds are gonna try out for this???

Bill O'Reilly: "There's no question that people of faith are being marginalized by a secular media and pernicious entertainment. The rap industry, for example, often glorifies depraved behavior, and that sinks into the minds of some young people, the group that is most likely to reject religion."

Has the "rap industry" turned you into an atheist?

Feature: Azealia Banks explains why she was never going to 'end up a broke bitch' http://t.co/d5bSps24p1 pic.twitter.com/nzYquExuKU

this is a really good interview

And now we wait. Until JANUARY. Sigh. Yes, this is a covert Person of Interest post, btw. Season 5 has received a reduced order. Early reports claim it will be 13 episodes, but according to this tweet the exact number of episodes hasn't been officially decided yet. According to the same tweet, Season 5 may well be the last, CBS and the showrunners are still in negotiations. On the bright side, maybe Sarah Shahi will be able to return full-time (fingers crossed, if they film later in the year). Plus, no filler means an even more insane pace. Let's see what happens.

So thrilled that I can finally share these images. I shot with @catherineharbour in London last month & this was the result 🙌🏻 Thanks to my agent for pushing me out of my comfort zone! MUAH@jamesmichaelbutterfield Top is @dominodollhouse#meetmilk #milkcurve #plusmodel#effyourbeautystandards

Source is her insta!

here's the gist of it: a fault in our stars' josh boone is set to co-write and direct the adaption and it's gonna be an expansion of the universe that fox already has w/ their x-men films.

Dutch - Level 5
Gorgeous, complicated, and deadly, Dutch is the leader of the Killjoy trio. A top-level Killjoy with serious combat skills, Dutch is a much-loved and a charming presence in her community, with a unique gift for earning people’s trust and respect regardless of their class. While bold and fun-loving on the surface, under her banter and protective flirtations there is maturity, pain, and a deep solemnity resulting from a dark secret past.

Source 1 and 2
The ship, Lucy, has been described in a lot of stuff as the fourth character on the series since it's A.I. There are no aliens on the series either despite the space setting, just people. The series will air on Space and SyFy starting June 19

Rihanna has not been doing well on the charts lately...and her fans are aware of this (stans who are not delusional are rare these days tbh!!). Stans have created a petition to force Obama into making radio stations play the patriotic single American Oxygen (delusional) which is officially a top 100 hit for three weeks in a row!

"Rihanna’s fans are angry and they think that racism, not the quality of the music, is preventing Rihanna from scoring a hit...'Rihanna has become another victim of racial discrimmination [sic] in the music industry [sic] since radio stations have refused to play American Oxygen, Rihanna’s best song yet. We believe Radio stations hey are juging [sic] the song by Rihanna’s race and not the quality of song. Thave [sic] no problem playing the new song from Britney Spears because of her white privilege.'"

boredgalriri get off your coke-binging a$$ and promote your singles

Say It Ain’t So! @LucyHale Says The Liars Will ‘Go Their Own Separate Ways’ In #PLL Season 6 http://t.co/7EupFSNjOH


- mtv wants aria to pick up creative writing (what??? bye)
- the separation won't last for the rest of the series (for three episodes max)
- lucy wants aria to have a pet (if shay can get a dance scene...)


for the six ppl on ontd who still care that this show exists. i feel like mona and ali wont survive the timejump and idk why. also lol @ ashley, shay and troian once again hanging around like besties while filming this season and lucy is never there once again. i bet she secretly can't wait for the show to be done next year

Exciting news Ritabots! Rita instagrammed the artwork to her upcoming single "Poison." The song is set to debut next Monday, May 18, 2015!

ONTD, what are some of your favorite Rita Ora songs? 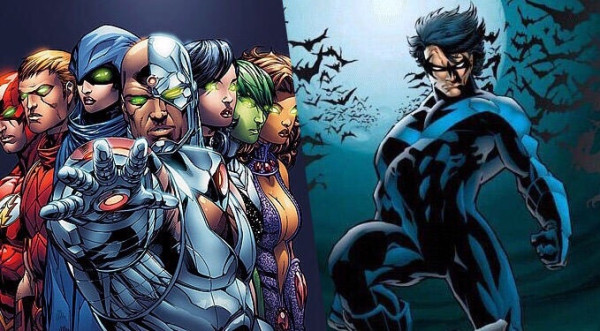 - This TNT Teen Titans show, which focuses on Nightwing, will probably start production and casting summer of 2015
- the pilot is being written by Oscar winner Akiva Goldsman (who wrote A Beautiful Mind, but also wrote Insurgent...)
- TNT President hopes this will be different from the other comic book tv shows and still true to the comics

On Wednesday Bradley Cooper and Irina Shayk shared another passionate kiss while out and about in London.

The Hollywood Reporter is confirming a report made earlier this year that the 1996 witchy cult classic, "The Craft," is up for a remake.

There is not much to report about this right now other than Leigh Janiak, an up-and-coming director, will direct and co-write the new film with Phil Graziadei. Graziaei also wrote Honeymoon.

Janiak is directing an upcoming episode of MTV's Scream.

Who would you cast as Nancy, Bonnie, Rochelle and Sarah? Can anyone match Fairuza Balk's iconic performance?

-The p̶r̶o̶d̶u̶c̶e̶r̶s̶ ladies decided to organize a trip to Atlantic city for Ramona's d̶i̶v̶o̶r̶c̶e̶ birthday.
-Sonja set things off on a perfect note by having the ladies wait outside her house in the rain for an hour while she s̶o̶b̶e̶r̶e̶d̶ ̶u̶p̶ packed.
-This led to an epic 5-way bitchfight on the limo ride to Atlantic City. Heather was especially pissed and basically stewed in it for the rest of the episode.
-Bethenny tried in vain to talk some sense into Sonja, with the third attempt bringing her to tears as she realized the depth of Sonja's problems and denial.
-Carole spiraled further into a bizarre Carrie Bradshaw fantasy life. Her new face has still not settled.
-Dorinda basically won MVP with her one-liners while taking care of Sonja's drunk ass.
-Sonja somehow got ahold of Monty's pills.

ONTD, what are your favorite Sonja quotes from this season?

FOX has released a trailer for "Luifer", their new series based on the Vertigo Graphic Novel series that was a spin off from other popular series "The Sandman".

I love the comics a lot, so this makes me nervous

Venezuelan duo Chino & Nacho released on May 7 the video of their new single, Me Estoy Enamorando. It was filmed in various locations of the Venezuelan capital, Caracas, and shows a love story between two young students.

RIDDLE RUMOR: What other DOPE director could be meeting at Marvel for BLACK PANTHER? :)

Also I don't think this was posted here, but some guy on Reddit attended a Q&A with Kevin Feige and Joss Whedon last week. Spoilers below:
( Collapse )

*Someone* sent Rihanna a bouquet of roses and an 'I love you' balloon http://t.co/fxbdAeOWoU pic.twitter.com/Krpdwqtgnf

ONTD, have you ever received roses and balloons?

Miley puts out a joint during her performance and says to the crowd: "Are you guys drunk yet? Are you guys high yet?” she asked from the stage, “No?! You’re gonna be at a show where I’m dressed as a f–king butterfly and not be high? I’m down to share.” Then, she took a puff, and passed her blunt into the crowd filled with ad-buyer types. “You better pass that back.”

She covered Johnny Cash and Led Zeppelin and even Khia's "My Neck, My Back" plus a new track "Tiger Dreams"

She also spoke about her foundation, Happy Hippie, and states: "We are changing the world. We’re in the process of it right now… There is a real world out there, and some people need our help"

It's not a bird. It's not a plane. It's not a man. It's Supergirl. In the new drama from the world of DC Comics, Superman's cousin, Kara Zor-El, embraces her superhuman abilities and becomes the hero she was always meant to be. This Fall on CBS. 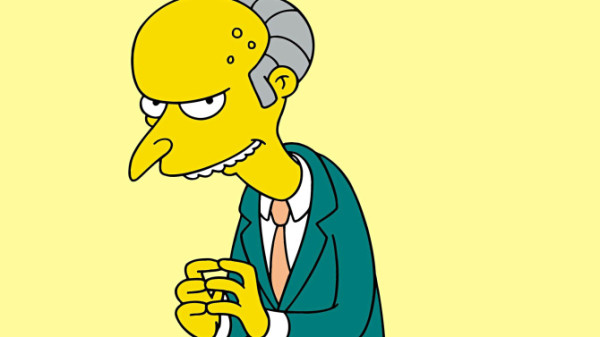 - Harry Shearer, the voice of Ned Flanders, Mr. Burns, and Principle Skinner, is leaving the show after 26 seasons
- he tweeted tonight: “This because I wanted what we’ve always had: the freedom to do other work.”
- apparently he had a contract dispute with Fox
- the rest of the cast recently signed two year extensions for seasons 27 and 28