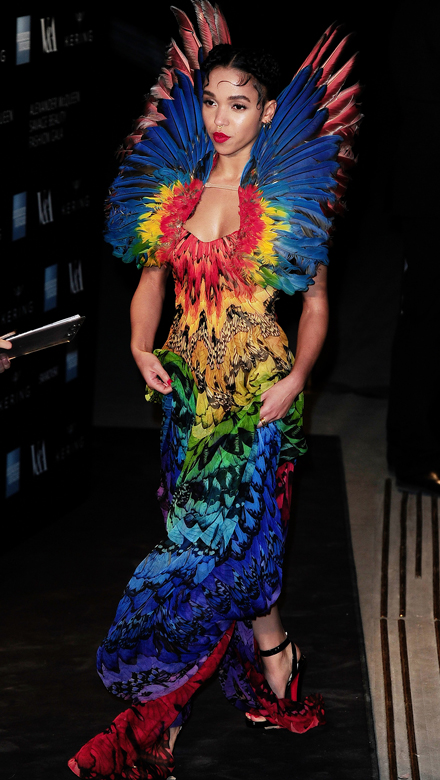 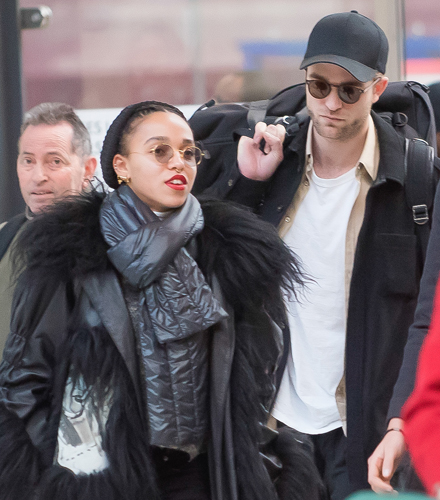 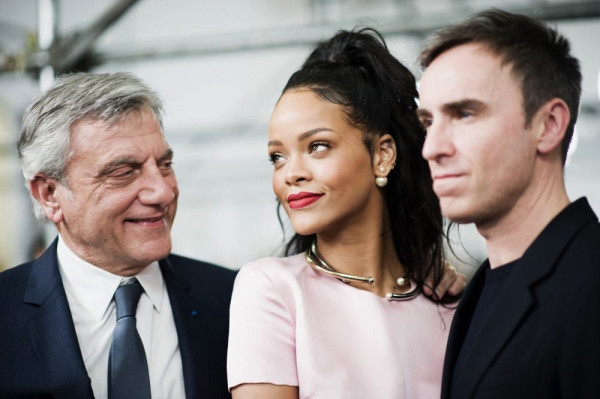 -Rihanna joins Jennifer Lawrence, Marion Cotillard and Natalie Portman as the faces of Dior.
-This is the first time a black woman has ever fronted the brand.
-She will appear in the fourth installment of Dior's "Secret Garden" series (shot in the Versailles as reported here) as well as a print campaign. Both will be shot by Steven Klein. 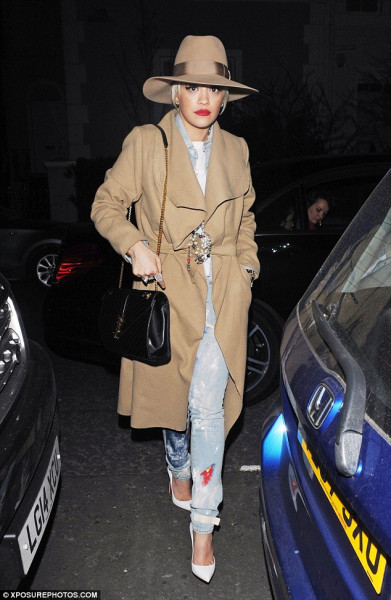 It was her dad's birthday and so Rita went out for a meal with him at Heston Blumenthal's restaurant at the Mandarin Oriental Hyde Park in London. She's dressed in what looks like a detective costume, probably looking for her career.

lol ok this is my first and probably last Rita Ora post ever.
made in memoriam of

kainoas who's banned for real this time.

"I had some therapy, but to be honest that's not what helped me. I relapsed and relapsed. Then it got to the point where I had to make the decision for myself that I would stop. You have to want to be done. Now I work out and try to respect my body. I'm not skinny, I'm a foodie," she said 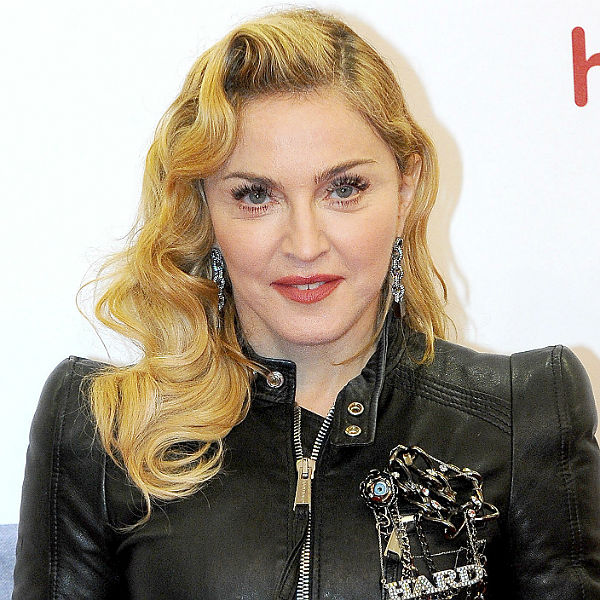 Pop singer Madonna was criticized for using a racial slur on Instagram last year. At first she didn't want to apologize, but later on she issued a formal apology saying she was "sorry if anyone got offended" by it.

In a recent interview promoting her new album Rebel Heart, Madonna is blaming her own son Rocco for using the racist hashtag:

"It was the one time that I listened to my son. It was his idea. I was like, ‘What caption do you want me to put on it?’ And I did. I wasn’t thinking." Madonna said when asked about the incident
Madonna also defends the use of cultural appropriation:

"Oh, they can kiss my ass. I’m not appropriating anything. I’m inspired and I’m referencing other cultures. That is my right as an artist. They said Elvis Presley stole African-American culture. That’s our job as artists, to turn the world upside down and make everyone feel bewildered and have to rethink everything."
source 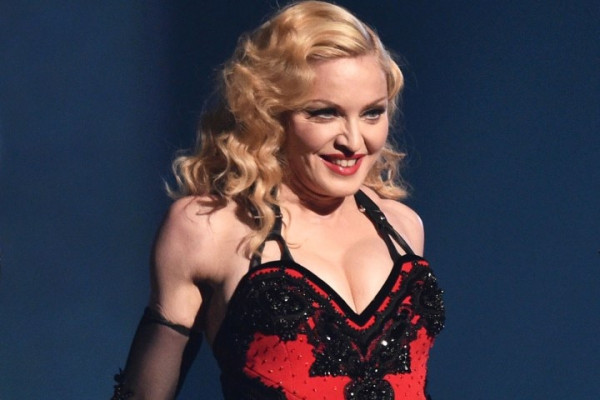 The NY Post reached out to Madonna's team today, amid buzz that ticket sales for Madge's upcoming tour are not selling well. In fact, The report reveals that thousands of tickets remain available a week after shows in major markets went on sale.

Arthur Fogel, Live Nation’s president of global touring, denied a slow start for “Rebel Heart.” “We’re thrilled with the performance of ticket sales to date, and we’ve no doubt this tour will perform to the level of previous record-breaking tours,” he said.
http://nypost.com/2015/03/13/new-madonna-tour-sales-more-sticky-than-sweet/ 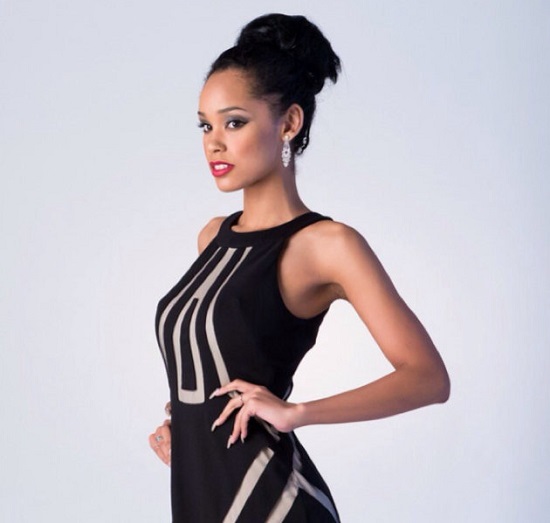 - Eriana Miyamoto of Nagasaki was chosen out of 44 contestant
- born and raised in Nagasaki and from mixed parentage; Japanese mother and American father and (the original Japanese article never mention her father ethnicity but I'm guessing he's black. Japanese usually refer to Americans simply as American, btw, regarding of their ethnicity)
- 20 years old and 173 cm tall
- has a license for large two wheeled vehicles and her hobby is working with tools
- studied abroad in USA after graduating middle school in Japan and works as a model after returning back to Japan
- “I thought ‘I wonder if a hafu like me would be okay’ and had insecurities. I think the world pageant will be a bit more vigorous, but I want to be myself and try my best.” 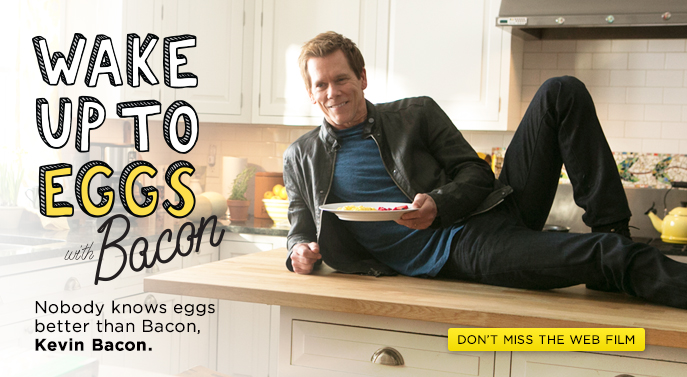 The American Egg Board has partnered with Kevin Bacon to promote eggs and Bacon puns.

"With a last name like Bacon, I'm the obvious choice, and I'm excited to be a part of the new Incredible Edible Egg campaign. I like the creativity behind the idea, and I've always been a big fan of eggs. They're a nutritional powerhouse and I never get tired of them because there are so many ways you can eat them."

ONTD, is there a better breakfast than eggs with a side of Kevin Bacon? 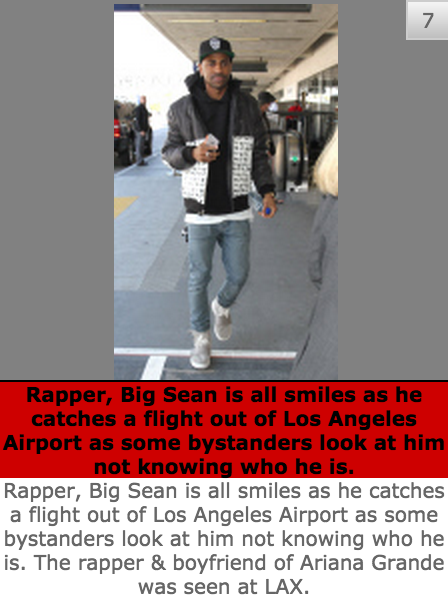 Big Sean didn't think writing a misogynistic song was enough, so when asked if he would rather dress as a woman for 6 months or dress like a Nazi for 6 months, his answer was, "I'd rather dress as a Nazi." because apparently being black and dressing like a Nazi makes no sense so it's totally better than dressing like a woman, because that would just be so much worse. 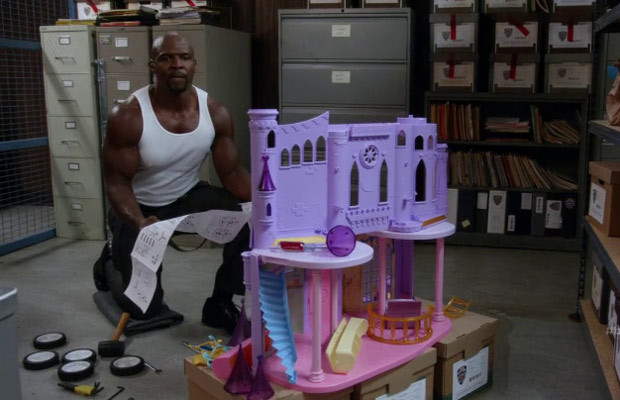 - Terry Crews is a feminist

- Embraces his feminine side

- Talks about misogyny in sports culture

- Thinks male pride is the worst 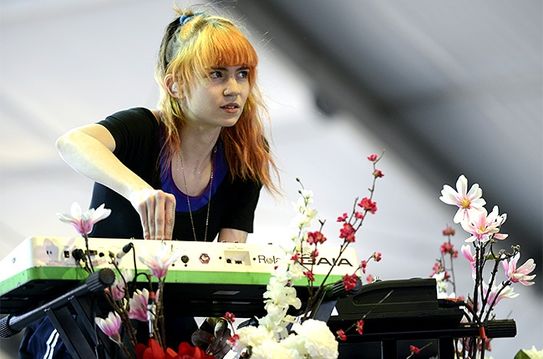 Claire Boucher, AKA Grimes, took to Tumblr to voice her thoughts on certain media outlets that claimed she scrapped her "Lost album" due to the bad reactions of her Rihanna-ditched effort, Go. She denied those rumors as she considered Go very successful.

"I throw out music all the time, I have almost 1000 gigs of unreleased music on my hard drive," She says on Actuallygrimes. "I just want the next album to be as good as possible."

REALiTi, her latest release, is said to have been made while depressed and living isolalated in the woods. Grimes goes on to say the reason her album was scrapped was because of the depressing material she had created for it. She felt like she could not tour with the music released.

Grimes will release another new song this Sunday for HBO's Girls.

Awww she's beautiful! She is the first transgender spokesperson for a mainstream skincare product. It's refreshing to see more mainstream transgender representation. Also, TLC is going to run a series called All About Jazz this summer. Go to the source below to learn more about Jazz and check out her interview with Katie Couric.

+ Big Hero 6 became the #1 animated title of 2014 today with more than $620 million globally, edging just past Dreamworks’ How To Train Your Dragon 2.
+ Also surpassed Tangled to become the third biggest Walt Disney Animation Studios release ever globally, behind only Frozen and The Lion King.

source
Now, where is the sequel? 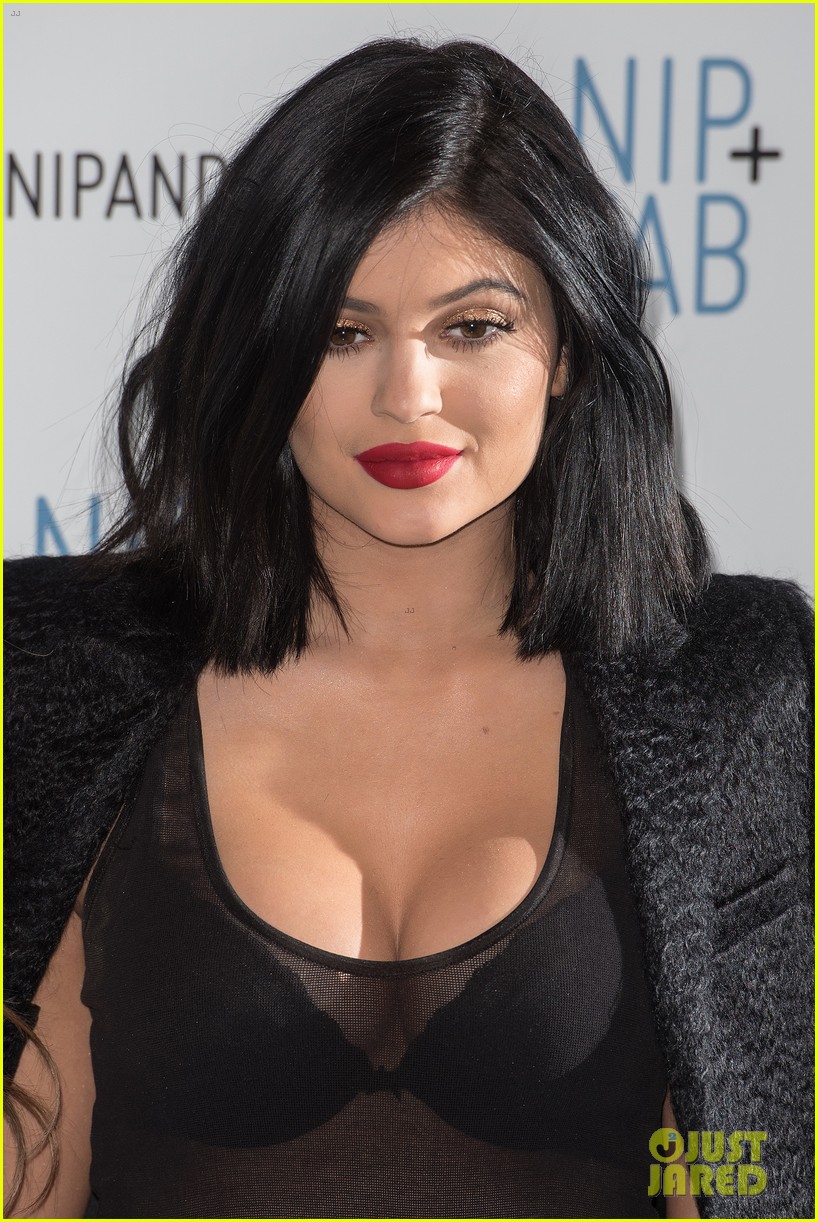 At a Nip + Fab event (she is their new ambassador)!

This marks the singers 11th consecutive Number 1 album extending her lead as the most successful solo artist in Australian chart History. 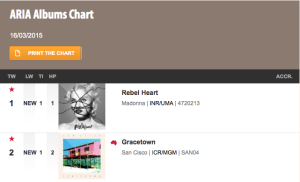 Madonna is expected to announce the Australian dates of her upcoming Rebel Heart tour later this month.

Wayne Coyne reveals to Billboard:
“At the moment we just sort of work on things as they come up, so part of this seems like something we’re working on with Miley, but we’re also working on it as a production,”

Britney Spears' comeback single is called Pretty Girls AND it's been written by Little Mix! Full story in Bizarre: http://t.co/T50I6JYSsB 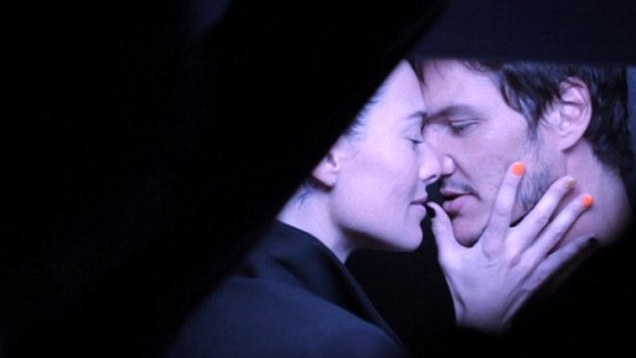 Pedro posted a drawing of a pregnant woman and with the words written "I'm gonna miss you".
( Collapse )
thoughts ? could this potentially be something related to lena headey? it is rumored that pedro is her baby daddy.

Yesterday, Shakira shared on Facebook a video of her and her older son, polyglot baby Milan, practicing reading. It's not the first time Shakira shares an educational moment with her son: she had previously posted videos teaching Milan English and US history in their visit to Washignton DC and another video of them learning how to read common words like "dad" and "grandma". In this video, Milan learns words like "goal," "paddle," "house" and "go."
( Collapse )
Sources:
El Universal
Shakira's Facebook

The Voices Special Screening and Q&A

Actress Gemma Arterton and singers Paloma Faith and Annie Lennox urged women to vote as they joined two of the Pankhurst Suffragette family and the Mirror’s #NoVoteNoVoice bus on the Walk In Her Shoes march. Walk In her Shoes wants people to pledge 10,000 steps a day for a week to show support for women around the world who regularly trudge miles for water. 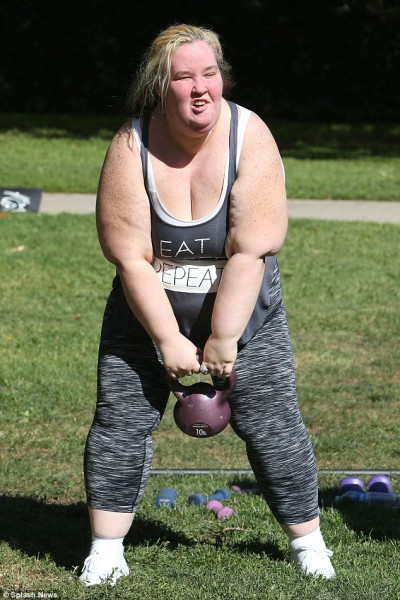 TLC cancelled "Here Comes Honey Boo Boo" in October 2014 when this happened, but Mama June is already trying to weasel her way back into reality television like it ain't no big thang that she dates pedophiles.

June was in Los Angeles on Friday to pitch ideas to network executives. The 35-year-old mother of four also made sure to get photographed exercising with personal trainer Natasha Fett, who has helped sculpt the bodies of Matthew McConaughey and Heidi Klum.

Do these photos of an enthusiastic June holding an array of exercise equipment make you forget that she was recently romantically linked to a convicted child molester, who molested her own daughter a little over a decade ago, because you're too darn busy thinking, "If only this zany family could get another television show then I wouldn't have to watch drivel like Better Call Saul anymore!"?
( Collapse )
SOURCE

This looks so good!!! PRAYER CIRCLE FOR MAIL ROBOT. AND MARTHA.

How was your Friday night, ONTD? Are you doing anything fun tonight or tomorrow? 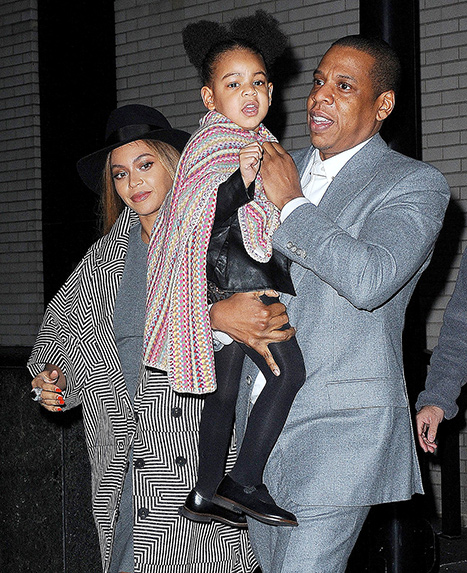 ►While Bey & Jay have chosen to live in the spotlight, they want Blue to have a normal upbringing, but they also want her to be safe. That’s exactly why the 3-year-old goes to her new preschool escorted by three bodyguards and two cars that ensure she gets in and out safely.

ONTD since almost all of you grew up in section 8 housing I can't ask how many ppl & cars took you to school
So the question is did you take the small bus or the regular bus. I once took the small bus cuz I missed my regular bus....lets just say no one in my neighborhood let it go for a good couple of yrs.

-Nicholas Brendon who played Xander Harris on Buffy the Vampire Slayer reportedly smashed a porcelain figurine, pulled the phone out of the wall and clogged the toilet, spilling water out onto the room's carpet causing nearly $1000 in damages

-Charged with damage to property and criminal mischief

-Brendon characterized the incident as a "blackout" after taking nine sleeping pills. Said he has been dealing with depression and "stopped taking my meds a while ago, which was a mistake."

-He was arrested last month in Ft. Lauderdale on similar charges after he damaged a hotel room there. He said he would seek help after a similar October arrest in an Idaho hotel.

damn i hope he gets better and back on his medication 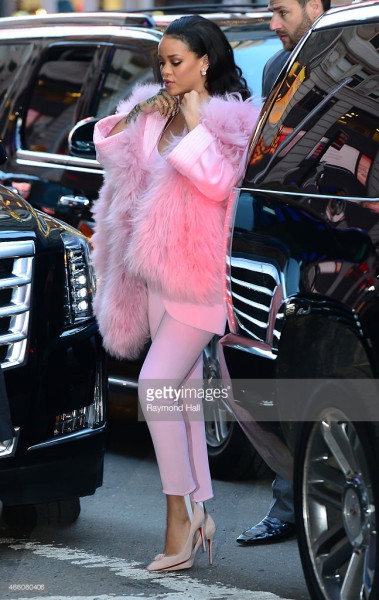 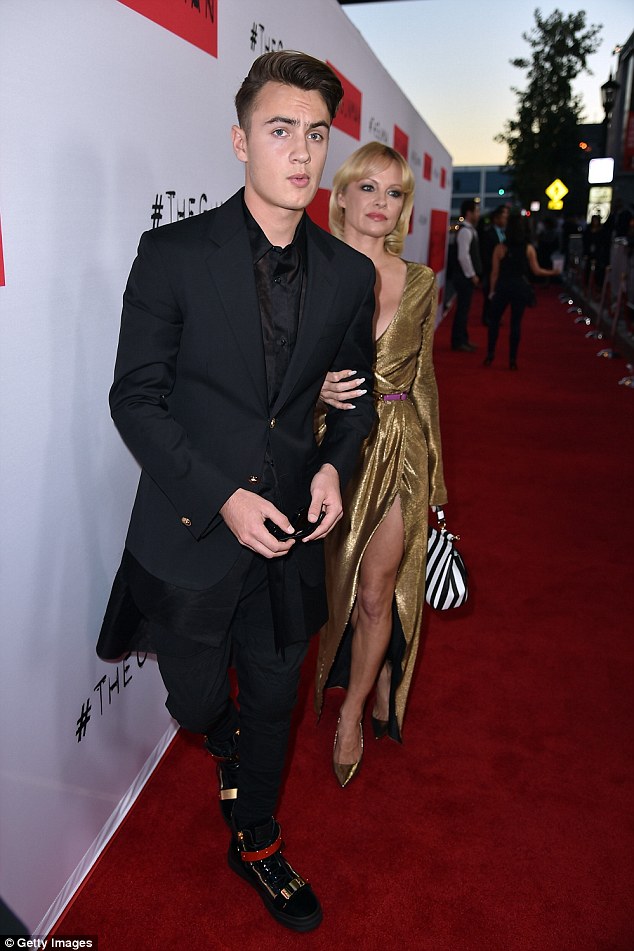 Slow news week? Not for Pamela Anderson!  In case your Google Alerts aren't working, Daily Mail has filled their right sidebar with many juicy Pamela news items for us to enjoy. *pulls up sleeves* Let's do this!

MARCH 12:
Pamela attends the premiere of The Gunman in Los Angeles.  Pamela's date for the event was her 18-year-old son Brandon Thomas Lee (son of Tommy Lee), who will hopefully get an agent soon.  If you go to the source there's a video of him posing with Pam on the red carpet and this kid's got the goods!  He's chewing his gum all relaxed and smiling at his mom while the photogs bark orders at him. Cool clothes too. Guy's gonna be a star! That's all it takes these days, no?

MARCH 13:
Pamela gets a restraining order against the penis in Paris Hilton's sex tape.  She claims Rick Salomon tried to strangle her during sex after he flew into a rage.  I believe it. That piece of shit.

MARCH 14:
In even more sad Pamela news, she was apparently banned from The Simpson's co-creator Sam Simon's funeral because his family is angry she accepted an $800,000 ring from him weeks before his death.  Simon's family feels she was trying to "take advantage" of him in his weakened state.

Get the sad news feeling out of your heart with more adorable photos of Pam and her son Brandon after the cut.( Collapse )
SOURCE, 2, 3

Well-known photographers duo Inez van Lamsweerde and Vinoodh Matadin (working together since 1986, a couple since 1992, parents to Charles Star) were interviewed and shared some opinions about fashion, fame and photography.

ONTD might know them from the three-headed Lady Gaga for V magazine pic. 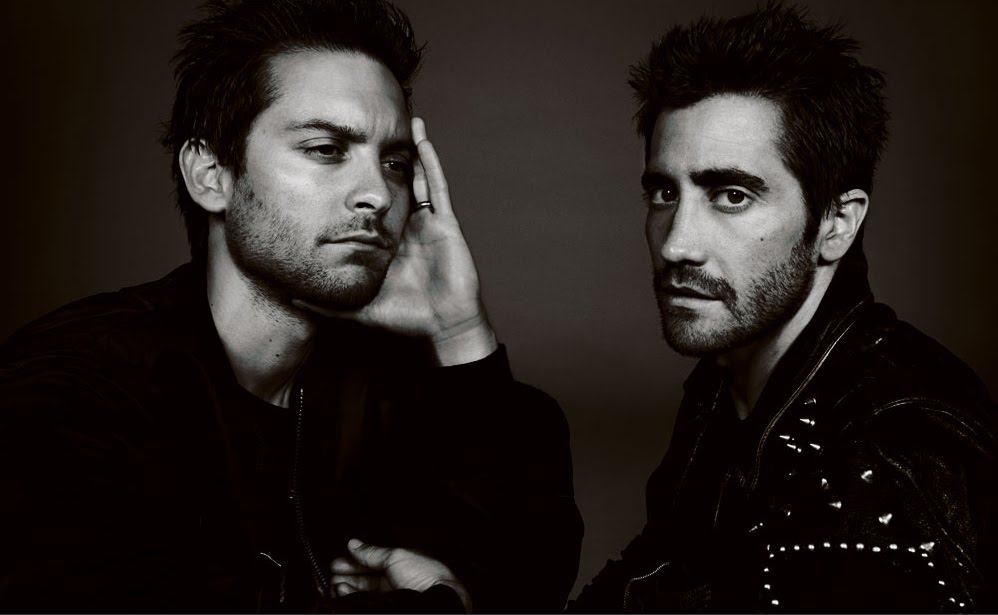 Favorite photographers, ONTD? And do you worry about see-through shirts as well?

I hope he wins in Vienna ❤️