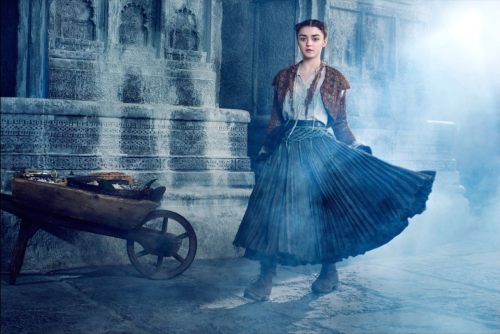 -Rory McCann does not appear in Season 5, but the producers won’t confirm whether The Hound is dead or not.

-There is some sexual tension between Jon and Melisandre, as Mel attempts to seduce Jon.

-“Dorne” appears in the opening credits, rather than “Sunspear”
( Collapse )

- Don't expect an album anytime soon, they're taking their time and not rushing things, no serious talks as of yet
- Concentrating on putting out 'great singles' which are more important in the digital era
- Possibly extending Vegas through to the end of 2017 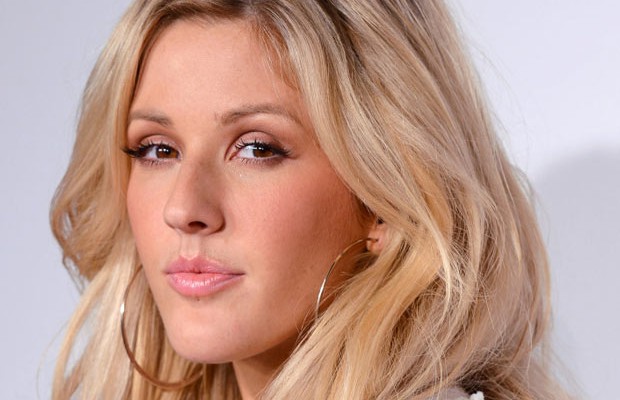 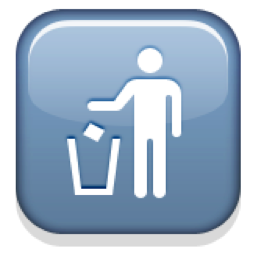 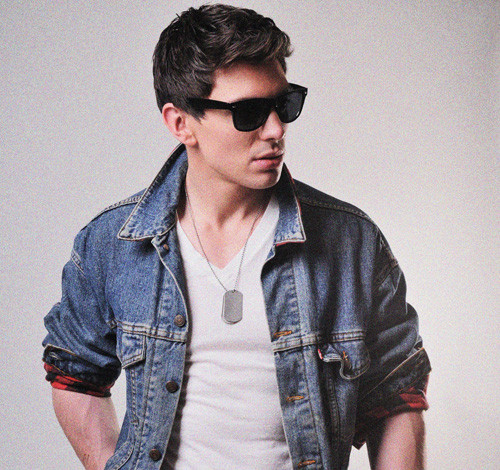 Openly gay musician Steve Grand won a lot of hearts over a year ago with his song ''All-American Boy'' and now he's back with his latest single ''Whiskey Crime''.

Grand's newest album will be released March 23 after his Kickstarter campaign raked in over $300,000.

-Her breasts alone weigh nearly 32 lbs.
-She can keep her driver's license, perfume, keys and phone in there. They pretty much double as a nightstand.
-Runs a massage business where men pay her $1,000 to smother and beat them with her titties.
-They're a hazard while she cooks because sometimes they slip into the pan or the pot.

-Wants a man that cares for her and not just her boobs.

Have you ever smothered a wo/man with your titties, ONTD? 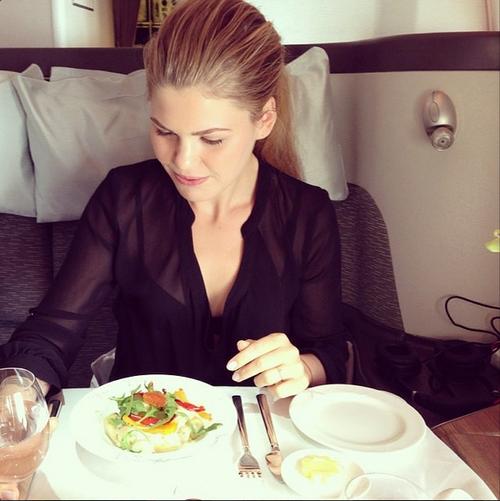 - Australian blogger Belle Gibson gained over 100,000 instagram followers as she documented her battle with brain cancer. She went on to create a popular cookbook called The Whole Pantry which has had various app for Apple products, including the new Apple Watch.

- Said she treated her cancer with holistic methods rather than standard procedures like chemo.

- Although she said she donated 25% of her profits to cancer charities, sis hasn't given them a dime. More than half of the reported recipients said they didn't even know about the original offer. Her staff blames it as a setback from underestimating costs for TWP production.

- People got suspicious and started questioning her cancer claims. In a deleted Instagram post from 2014 she stated, "With frustration and ache in my heart, my beautiful, game-changing community, it hurts me to find space tonight to let you all know with love and strength that I’ve been diagnosed with a third and forth [sic] cancer. One is secondary and the other is primary. I have cancer in my blood, spleen, brain, uterus, and liver. I am hurting."

- Now that shit's hit the fan, Belle's Apple Watch app seems to be on hold and she's gone into hiding from Australian media.

Suddenly the koons is Dr. Phil's WebMD level expertise. This is giving me Kony 2012 vibes.  Do you follow Belle and believe/disbelieve her? 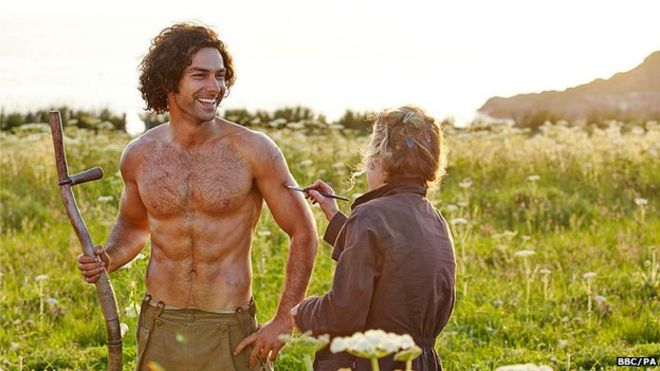 BBC used photo above to get people to watch his new show, Poldark. Aidan is not too thrilled because he only did it for historical accuracy. (lmao) "Apparently it was common law at the time that when you were scything you had to take your top off. So I did."

"I don't know why the BBC are releasing photos of it. It's a bit strange. It's not a stripper show."

Aidan also insists his show isn't boring, despite being a period drama, and he won't be naked nearly as much as we'd like. "The themes that we cover are still relevant today and people want to hear about them. There's some semi-nakedness in the show, there are a couple of bedroom scenes, but it isn't gratuitous." (boo)

Do you think we should stop objectifying male actors, ONTD?

Can we get a Poldark tag? lol 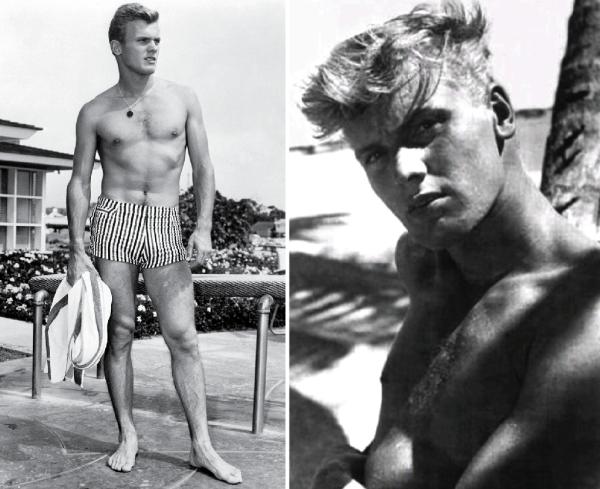 With his wholesome blond good looks, Tab Hunter became a top box office star in the 1950s, headlining hit movies like Battle Cry and Damn Yankees. He even launched a successful singing career and his song “Young Love” became a number one hit. He seemed to have everything and was often referred to as “America’s Boy Next Door.” However, Hunter had a secret he needed to keep hidden: he was gay. In the new documentary Tab Hunter Confidential (adapted from the actor’s 2005 memoir), the now 83-year-old shares his fear of being outed during his hey day, his love affair with Anthony Perkins and the incredible story of how he endured to become a happy, healthy survivor of Hollywood’s roller coaster. The film will premiere March 15 at the SXSW film festival in Austin, Texas. 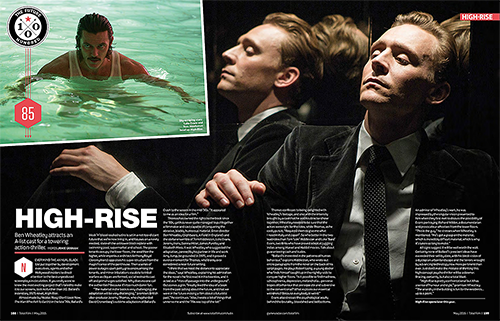 ||| Sony has not commented yet on whether they intend to continue making Popeye without Tartakovsky’s participation. 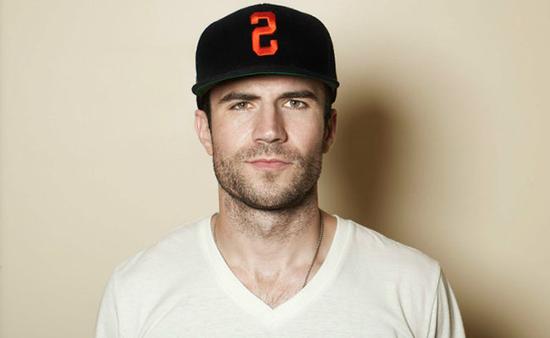 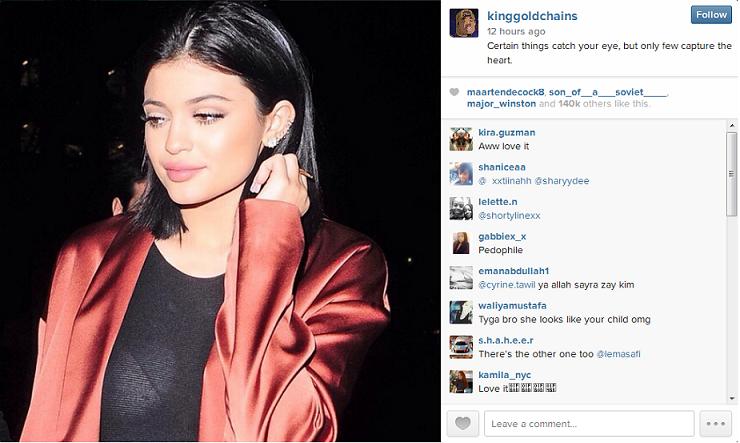 Tyga once again posted a photo of Kylie on his Instagram after denying being in a relationship with her. He captioned it, "Certain things catch your eye, but only few capture the heart."

Have you been having just as much fun as I have controlling/starring in the video. TIP: If it's laggy, let it play through once and it should loop and run better on the second playthrough, at least for me. 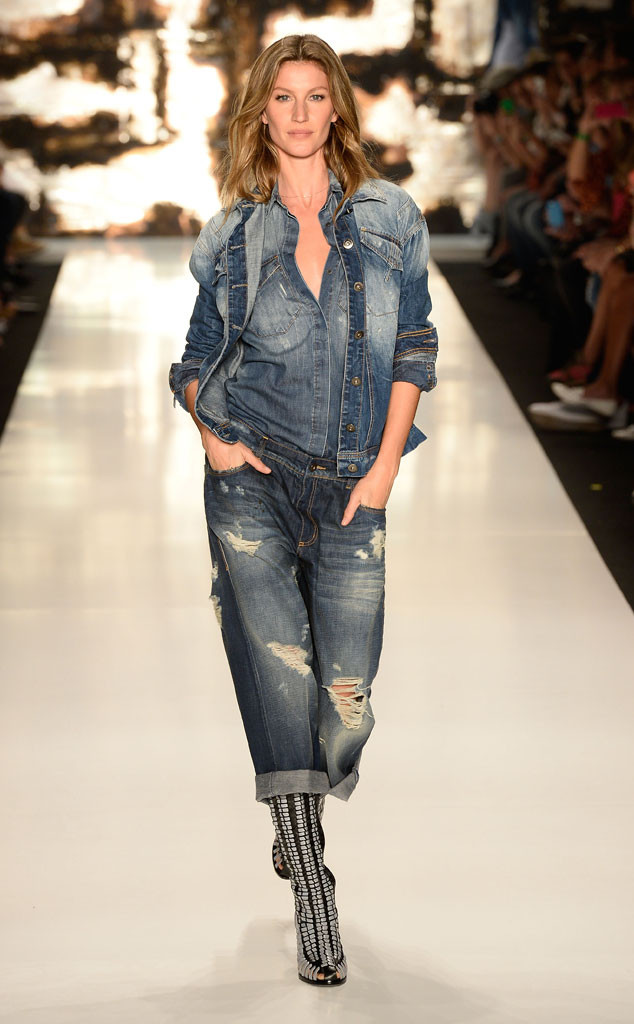 - She's been a runway model for 20 years
- Her final walk will be at the São Paulo Fashion Week in April, in her native country Brazil.

As the 90s wrapped up and the fear of Y2k began to dwindle, it was a new era in music as the new millenium came upon us. Of course, over the past 15 years, there have been an insane amount of crazy and exciting moments in music. Lets take a look ONTD

( Collapse )
src, src,src,src,src
What were some of the most outrageous music moments in the new millenium for you ONTD?

Love it. Seeing him in April! 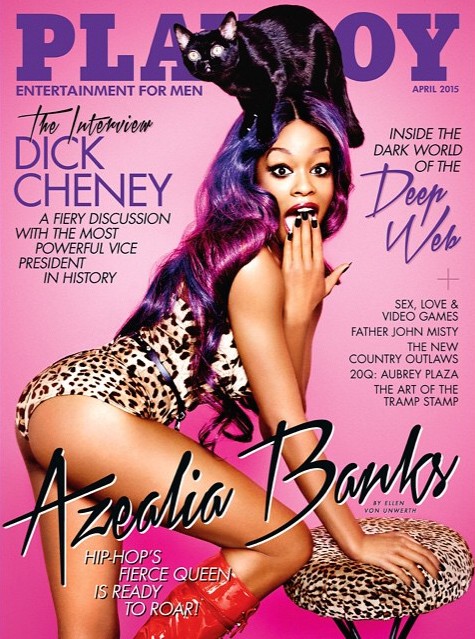 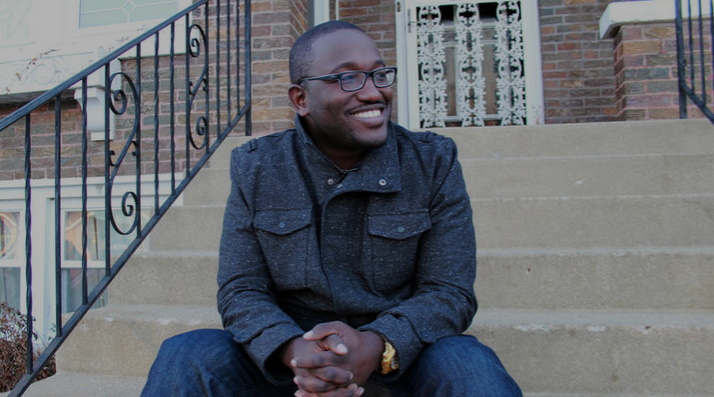 His show will be called "Why? With Hannibal Buress" and will feature stand-up where he answers the "burning questions on his mind", filmed segments, man-on-the-street interviews and in-studio guests.

Comedy Central has greenlit eight half-hour episodes, and it will be filmed in front of a studio audience.

Besides Broad City and The Eric Andre Show, Buress will also be one of the featured roasters on Justin Bieber's roast on March 30. 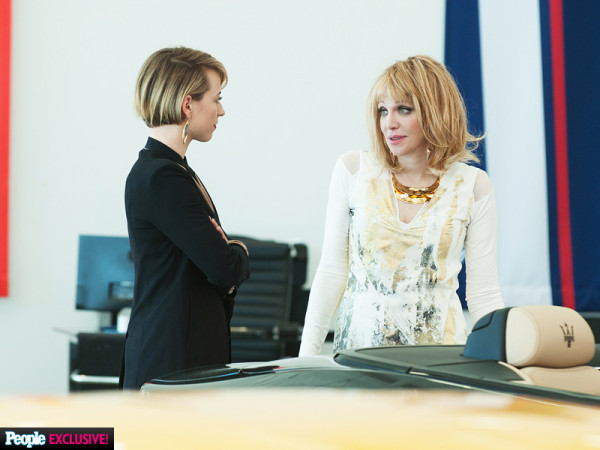 Fresh off her dramatic multi-episode turn on Fox’s Empire, Courtney Love is rockin’ another role, on ABC’s Revenge.

Per People.com, Love will play — wait for it — “White Gold,” a jetsetter who is brought to the Hamptons by (well, of course) Margaux.

The iconic fashion duo, Domenico Dolce and Stefano Gabbana don't mince words when it comes to marriage equality or gay parenting. In a recent interview, they let the hate fly:

"The only family is the traditional one. No chemical offsprings and rented uterus: life has a natural flow, there are things that should not be changed."

Domenico Dolce refers to children born out of artificial insemination, "children of chemistry" and "synthetic children."

This isn't the first time they've come out against gay marriage or gay parenting:

In a 2013 interview with the pair, Domenico, when asked whether they would consider getting married, said: “What?! Never! I don’t believe in gay marriage.”

Stefano Gabbana, in an interview back in 2006 said that he was opposed to children growing up with gay parents.

Really bummed we won't get any more of this until next year...
Source

In an interview with the New York Daily News, Suge Knight's lawyer, Matthew Fletcher, is now claiming that the rap mogul's vision impairment was the reason he accelerated his car and killed Terry Carter in January. Apparently, Knight is legally blind in his left eye. He can see, barely.

“How can he go left if he can’t see? This was a literal presentation of being blindsided. He was attacked on his blind side. To me it seems obvious. He’s being punched in the face, he can’t see.”

Fletcher claims that Knight was being assaulted and feared for his life. That's his story and he's sticking to it.

“We wanted to use the ‘Mean Tweets’ model because in a way, those videos give the message that cyberbullying is ok – even funny. But adult celebrities have the maturity and confidence to overcome these hurtful words. Children don’t. For regular kids, words can cut like a knife.”

In an Interview with Global 14, Lil Bow Wow (who would like to be called Shad now... but who really cares?) revealed that he would never be on Empire (as if they were checking for him with their success now). Bow Wow says “When we were still filming Cyber episodes, Empire‘s first episode premiered. Fans were saying, ‘Man, you should have been on the show.’ But we all don’t rap or play basketball. We can do so many things. There are young African-Americans who are intelligent enough to work at the FBI. That’s what’s so bright. Hopefully, I can help start a new wave of young black actors who don’t want to stereotype themselves.“

$10 says he'll be on the next season of Love and Hip Hop.

The Final Girls is about a girl (played by Taissa Farmiga) and her friends who get sucked into an 1980s slasher movie that starred her late mother (Malin Akerman). It premieres tonight at SXSW and is currently looking for a distributor. 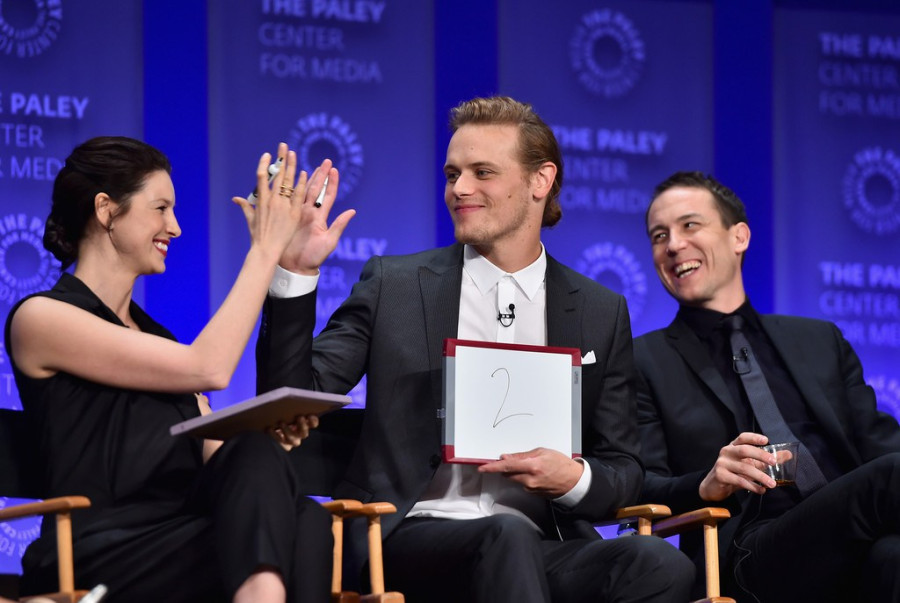 Cait, Sam, Tobias and Ron Moore (plus Diana Gabaldon) were at the panel yesterday


- The cast was super cute, played fuck, marry, kill; they did a drinking game with whisky; and were generally awesome (Sam looks slightly better with a  bun)

- Diana Gabaldon was problematic again talking about really wanting to watch a rape scene (she is sooooo messy, as always)

Source (video of the complete panel)

So, who's gonna go to this concert and report back to ONTD? Using my Maria Hill icon because that was my face when I saw the tweet. (And I only saw it because some Teen Wolf actor that started appearing last season retweeted it.) 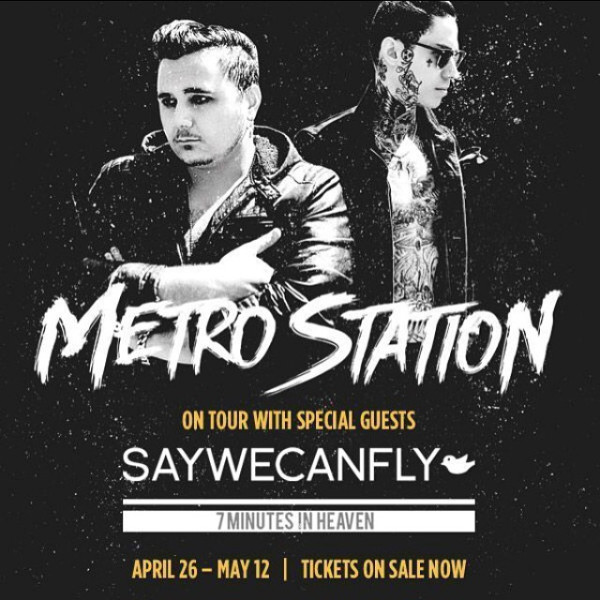 
brought to you by my myspace reminding me i was a fan, and dedicated to

My dad's fine work! He built a prosthetic leg for this pup so he could walk for the first time. Too cool. pic.twitter.com/FG35ialDQx