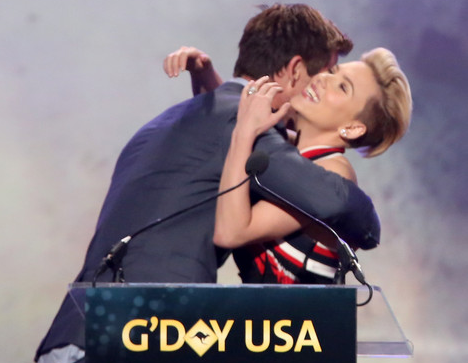 
source/red carpet reporter
it reminds me of Miley's hair and yes, this seems to be the whitest thing ever

inspired by the previous post on band drama, here is a post purely for some of the biggest British band drama that has happened.

source: my memory(if any of these details are wrong please tell me,its late at night im only doing this as people in the last post requested it) and im sure there are many more dramas i could have done but the 90s drama seems to be the best way to start
1 2 3 4 5

ONTD, have you ever left an open gate and someone sneaked inside your house/apartment?

Conan had Marshawn Lynch and Rob Gronkowski on earlier this week for an edition of Clueless Gamer. They were both completely adorable and Marshawn was funny as hell. Some Beast Mode highlights:

- He claimed one of the characters had "Amber Rose" hair

- He demonstrated his nut grabbing technique, and advised that you don't have to wait for a touchdown to grab your nuts

We're a bit overdue for a Super Bowl post today! What are you doing for the game ONTD? 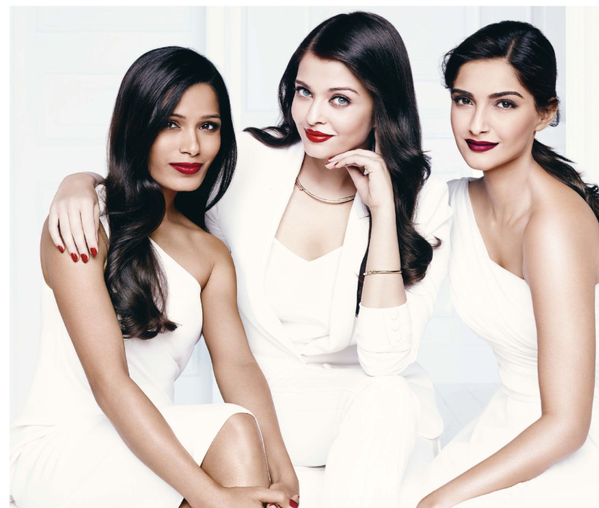 The latest L'oreal Ad shows Freida Pinto, Aishwarya and Bollywood Actress Sonam all looking Snowy White what with their white costumes, the background and lo! their complexion.

The ad also shows a glimpse of the US version. There they had 75 year old Jane Fonda, 54 year old Julianne Moore, French actress Laetitia Casta, an Ethiopian-born model, maternal health advocate, Liya Kebede, Russian model Natasha Poly, Zoe Saldana, among others. Now isn’t that a bunch you can call “women”?

Same brand but different outlook. Can I ask why? Is it because they think Indians are narrow-minded when it comes to seeing older and darker skinned women wearing cosmetics? 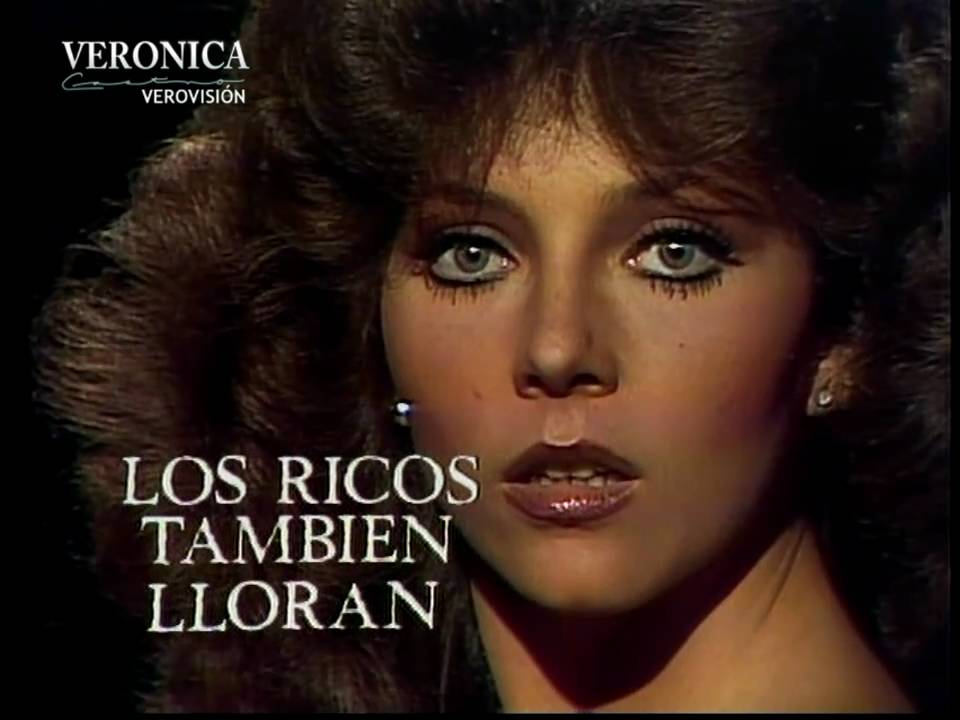 Los Ricos También Lloran (1979)
Los ricos también lloran (The rich ones also cry) is a popular telenovela produced in Mexico in 1979, starring Verónica Castro, Rogelio Guerra and Rocío Banquells. Castro also sang the theme song Aprendí a Llorar (I learned to cry), a song written by Lolita de la Colina. The telenovela was produced by Chilean Valentín Pimstein and Carlos Romero, it was directed by Rafael Banquells. The story was written by Inés Rodena and adapted by Valeria Philips.

ONTD, which is your favorite Mexican telenovela? Mine is “La Usurpadora” because of Paola Bracho.

In episode 2 of #apathappears @NickKristof & Jen visit @SaveTheChildren in her native WV. Feb 2 on @PBS. http://t.co/cvNR2lNjCX


Jennifer Garner returns to her native West Virginia in PBS's A Path Appears on Monday night (February 2) to visit families enrolled in Save the Children’s Early Steps program, which introduces books and early learning to children living in poverty, and provides social and emotional support for the mothers.

Garner has held the position of Artist Ambassador with Save the Children’s US Programs for the past five years. As an Artist Ambassador, Garner brought Save the Children’s early childhood development and literacy programs to her home state, West Virginia, which she also visited with journalist Nicholas Kristof for the filming of A Path Appears. She has advocated on Capitol Hill on behalf of the organization and traveled to California’s Central Valley, Kentucky and West Virginia to see the effects of poverty first hand. Garner recently joined the global nonprofit’s board of trustees.

Jennifer out in Los Angeles 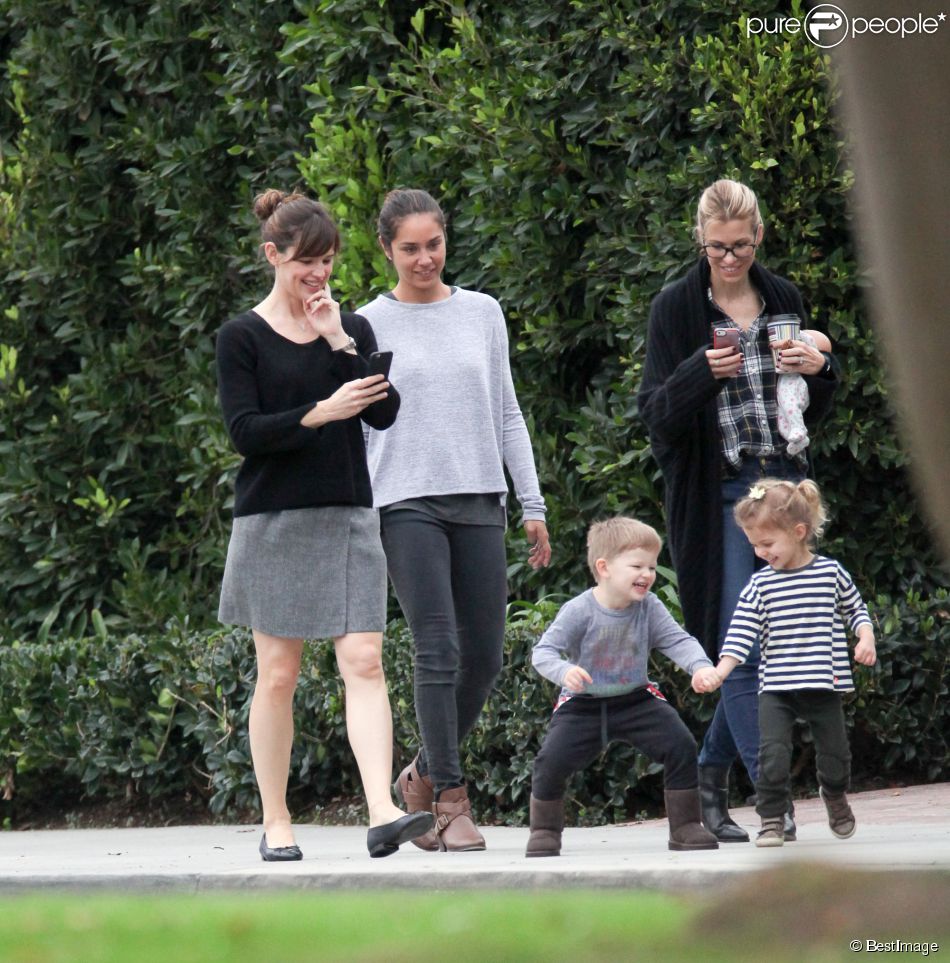 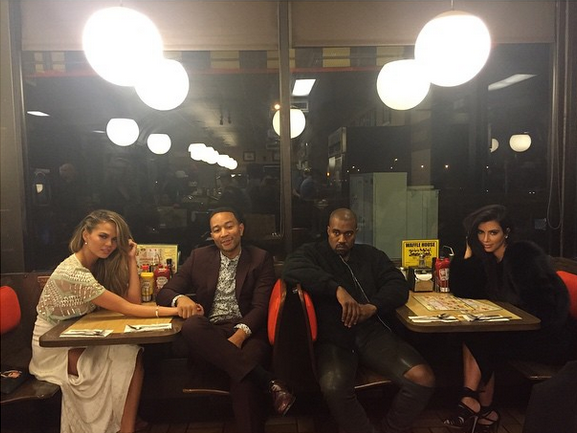 "..written by me and me alone" @MarinasDiamonds talks to @guardian about album #FROOT & how she killed Electra Heart! http://t.co/3GuP737WQg

Taylor Swift just posted this Instagram yesterday in honor of JT's birthday! The caption reads "Happy Birthday, @justintimberlake! Thank you for your music, comedy, daaaahncing, songwriting, and for taking this selfie:" and is a throwback to taytay's 25th bday party.

More importantly, is this picture hinting at a potential collaboration with Jay-Z on his upcoming business venture, a Spotify rival called Aspiro? Here's a quick recap of what's happened these past couple of months:

1. Taylor pulls her entire catalogue from Spotify in Nov. 2014, citing reasons about not being ~valued enough for her art~ aka she wants more $$$$$

2. She invites JT, Bey, and Jay to her 25th bday party in Dec. 2014. Later that week, Jay and JT were photographed leaving her apartment. She was then spotted with/near Bey at a JT concert.

3. Rumors began that the four are collaborating on something - maybe a new song or a new business! A blind item also appeared saying as much.

4. Jay-Z is announced to have acquired Aspiro, a potential Spotify rival

5. The very next day, Taylor posts the above pic to IG!

Maybe this was just an innocent happy birthday message, but knowing how calculating Tay is, there's probably an ulterior motive here and a new business venture just might be it!

ONTD, would you switch to Aspiro if you were able to stream Beyonce's next release for free? 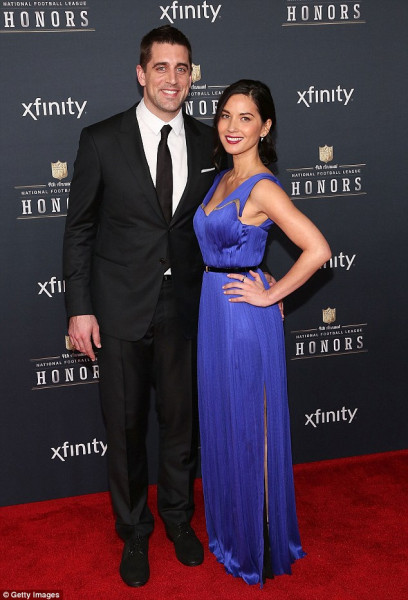 Football bae A.aron Rodgers beat out Texans Defensive End J.J. Watt to win the NFL MVP, his second time winning! When presented the award by the amazing Peyton Manning, who has won the award more than any player, Rodgers remarked that he was honored. J.J Watt won Defensive Player of the Year. Olivia Munn was there to celebrate with him.


Continuing his streak of being an amazing person, Rodgers also surprised children who lost their fathers serving in the U.S. Military. Watch the video under the cut.
( Collapse )

Two weeks ago he also said what we all think, that God doesn't care about the outcome of football games.
( Collapse )

In addition to being a prolific pass thrower and charitable bae, A.aron also showed up in a hilarious cameo on a new Key and Peele segment.
( Collapse )

ONTD, are you sad that choosing a team to root for in the Super Bowl is a lesser of two evils situation?

- Novak seemed to struggle with an injury to his right hand as well as his ankle during the match, but pulled through in 4 sets.

- Novak has broken the tie with Federer and Agassi to hold the record for most AO titles in the Open Era. Still behind Ken Roswall with 6 overall.

- Novak has been in 5 AO finals and won them all.

- Murray has been in 4 AO finals and lost them all.

Agent Carter is surrounded by danger when a top secret mission helps reunite her team, the Howling Commandos, and leads to the deadly Black Widow training grounds. Tuesday 9|8c on ABC.
Source

Yaaaas, Captain Flint is back! Captain Low is cutting off heads! Jack Rackham is coming for your Captaincy! And Vane remains the worst.

Kellan Lutz, Jamie Foxx, Nick Cannon, and Nelly were there as well. 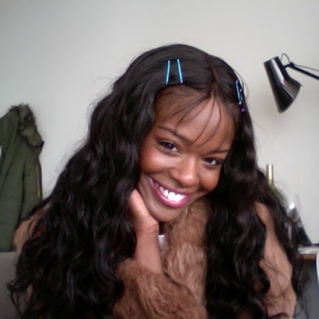 Mitchell Sunderland ✔ @mitchsunderland
@AZEALIABANKS there is nothing to give up. This isn't a battle. You're a homophobe and mad you get called out

AZEALIA BANKS ✔ @AZEALIABANKS
Follow
@mitchsunderland and even if i am a homophobe… so wat? i still make more $ than you.. still have an extra hole.. and still own everything.

ontd, who is more problematic; azealia banks or iggy azalea? 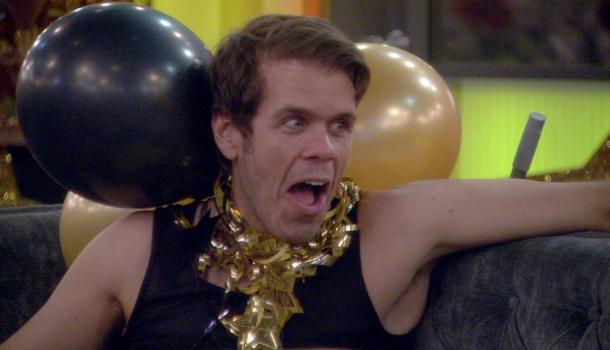 Ahead of the final on Friday, there will be a live surprise eviction on Monday.

There will be a 2 hour long show, split into two 1 hour segments, hosted by both Emma and Rylan.

BOTS will air after the 2 hour marathon.

I'm so excited. I wonder what's going to happen... 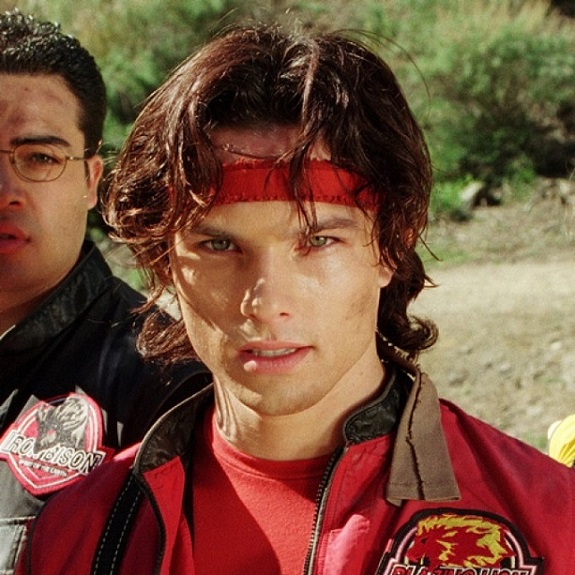 My hatred for this fuckwit (who also appeared as some dude on Power Rangers Samurai, but I couldn't even deal with that show so w/e) has been justified: he got into a fight with his roommate and stabbed him with a sword. He'll probably plead self-defense, because it sounds like Ricardo and his girlfriend were in his bedroom when the roommate forced his way in.

But either way, fuck this guy, and also Taylor should have been the leader of the team, BYE. 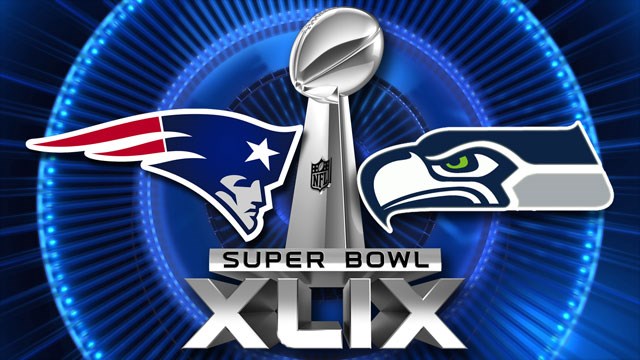 who are you rooting for ONTD?

Adam Pally filled in as guest host of The Late Late Show on January 30, 2015 with Ben Schwartz as his co-host, and the results were hilarious/trainwrecky. You can watch the whole thing here, including interviews with Beth Stern and Eric Andre. 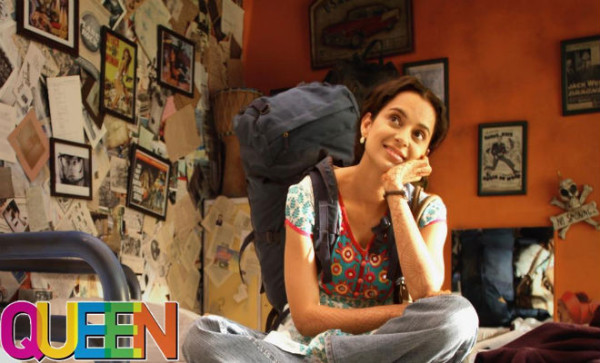 Source for the rest of the winners- go here

Who was best dressed, ONTD?

They rose to fame after starring in the movie adaptation of J.K. Rowling’s Harry Potter series.
So it was hardly surprising to see some of the stars of the cinematic franchise attend annual event, A Celebration Of Harry Potter, on Friday.

Robbie Coltrane was also supposed to be there but couldn't make it due to ill health. Hope he's doing better.
sources: 1 2

I AM NOT READY.

PS If you want to complain "Why are they still making these" What exactly have you contributed to the world?

I'm Flying to Canada tonight to shoot the video for Ice Princess!!

The girls and I got to talking and I'm overjoyed to announce that @haimtheband will be joining The 1989 World Tour!! TOURING W/ SQUAD YESSSS

so excited we get to hop on the 1989 tour with @taylorswift13 and play a few of our favorite cities! gonna be 🔥🔥🔥


src 2 3
i know people here wanted this to happen so yay! 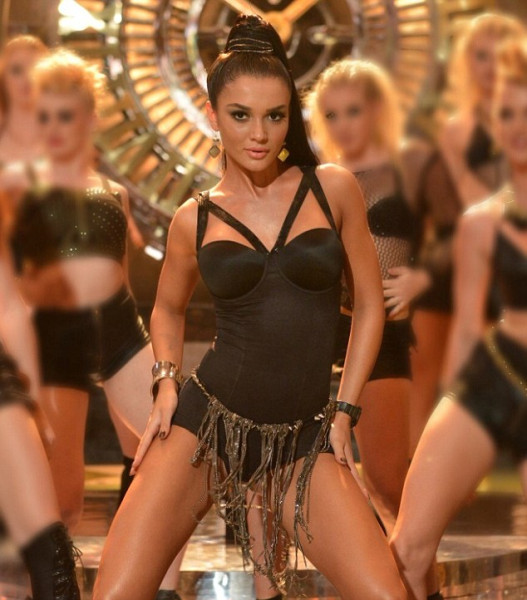 - Amy Jackson is a 23 year old white girl from Walton, Liverpool "with a girly Scouse accent more reminiscent of a cutesy five-year-old than a silver-screen sex siren".

- She is also a superstar in Bollywood rising actress in Tamil movie industry who "receives thousands of letters, most declaring undying love, many asking for her hand in marriage. She has a chauffeur, a make-up team and stylist, a cleaner, a cook and a personal assistant" and is hounded by thousands of adoring fans.
( Collapse )

What pisses me off is that directors put her in brownface (darkens her skin) and she agrees to do so. This pic is from a Hindi movie of her's called Ekk Dewaana Tha: 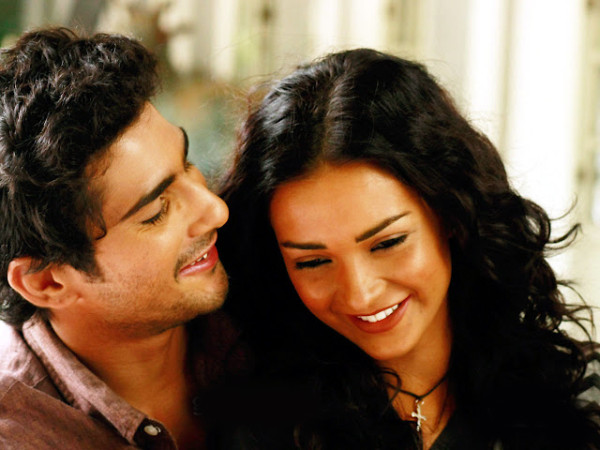 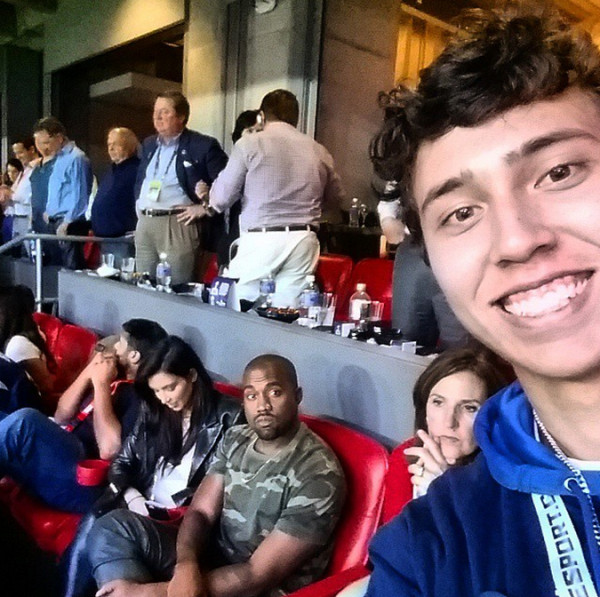 Kim Kardashian and Kanye West attended the Superbowl and probably died a little inside whenever a time-out was called and the twenty-something white guys whipped out their phones and started taking non-consensual selfies with them.

In Kanye's dreams, he blends in with his background whenever he wears his favorite designer camouflage tee shirt, and the bad guys with cameras can never find him.  In real life, photos like the one above and the one behind the cut happen.
( Collapse ) 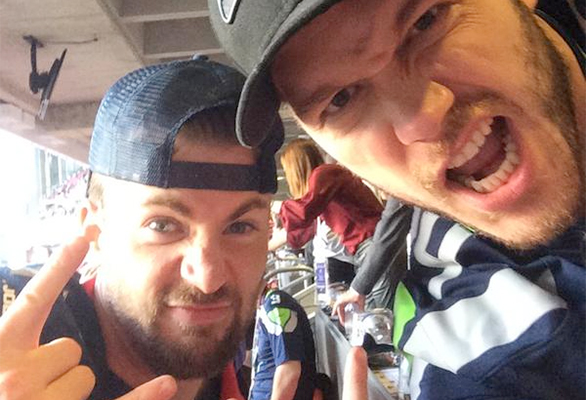 Congrats to the world champions @patriots you were the better team tonight. I will be visiting @chris_haven as Starlord. #twitterbowl

How do you feel about not being able to do things because you're dead, ONTD?

Rihanna performed a series of her hits including "Rude Boy", "Umbrella", "Stay", "We Found Love" and then along with Kanye “All of the Lights”, “Run This Town” and a “Diamonds” remix. Kanye West also performed “Jesus Walks,” “Black Skinheads,” and his most recent song, “Only One.”

WTF! I was looking forward to this. I really thought 2k15 would finally be The Year of Schoenaerts and so far it is not going well at all. >:[ (why the Christ do we have to provide sources for embedded tweets??? It's right there in the tweet!)
1 | 2
Collapse