Naomi Campbell has hit out at the fashion industry for not using enough black models.

The 40-year-old supermodel said that although things have improved since she started on the catwalk, black models are still not being used as much as they should be.

She told The London Evening Standard, "We're all aware that we need to introduce more women [of colour].

"But what I've seen recently is that I've seen it go backwards slightly. We need to raise awareness again and need to start using women of colour more."
( Collapse )

He’s one of the most sought after actors in the world. Even Reese Witherspoon has a crush on him! But things could have been terribly different if Robert Pattinson got his wish as a child. He wanted to be a rapper when he grew up!

The Daily Mail reports that Rebecca's sunday song will be Beyonce's Single Ladies.

Rebecca's hometown radio station switches it's name to Radio Rebecca in support as she goes into the final.

they grow up so fast.

Amy on the cover of Marie Claire's January 2011 issue: hate the cover, love the spread. :3 EDIT:  Okay based on the comments I know that it is IRVING Plaza and not IRWIN Plaza.  I took the name from the source, Juanes' facebook page.  So obviously HE got it wrong which... is kind of funny :P  Anyways I fixed it in the title.

“Do you want anything from the shop?”
“Cornetto.”

I doubt there are too many students who are not at least dimly aware of which film that quotation comes from. Though the TV show Spaced brought moderate success, Shaun of the Dead is the film which really catapulted Edgar Wright (and fellow collaborators Simon Pegg and Nick Frost) into the public eye in 2004, and the world is certainly a funnier place for it. Famously tagged as ‘A Romantic Comedy with Zombies,’ Shaun of the Dead shamelessly broke with convention while celebrating past movie greats. Centring on one man’s quest to save his girlfriend (and his Mum) from an endless zombie horde by hiding in a pub, for many it became a classic immediately. For me, there are two things in particular which stand out in the film. One is the genre-defying pure ridiculousness of the concept: a zombie apocalypse in Britain is otherwise unheard of, and Wright heavily plays on British culture for laughs. The other is the film’s sheer depth: it stands up tremendously to multiple viewings as you’re always likely to uncover a buried motif.


A Mash-Up of Edgar Wright’s Films

Edgar Wright has to be one of the top directors of this generation. With a sense and style he can call his own Wright has directed three incredible films: Shaun of the Dead, Hot Fuzz, and Scott Pilgrim Vs. The World. But if you don’t know one or any of the three, now is your chance to get acquainted with them. Wright posted a link to a video that includes scenes from all three of his films on his twitter account today. Youtuber Joel Walden mashed up the different scenes from Wright’s movies into one 2:19 minute video. Hit the jump to see it.

Mandy Moore and Zachary Levi (aka Rapunzel and Flynn Ryder) are in Australia right now during Tangled promotion.  What did they decide to go do together?  Go SKYDIVING! I have also been following him all day on twitter so that's how I know they are doing Tangled promotion.

While she has done movies that tilt towards the humorous, such as 2004's Garden State, she has yet to appear in a flat-out chucklefest.

That will change in a big way next year when she appears in two comedies — both ribald R-rated romps. First up is No Strings Attached, directed by Ivan Reitman and due Jan. 21. She and Ashton Kutcher are best friends who attempt to have a sex-only relationship.

FYI -- the chick on the left (Misty Stone) is playing Oprah ... and the one on the right (Bella Moretti) is Gayle. Christina Applegate - and her baby bump - worked the pole in a video for Funny or Die.

cing video for Funny or Die may have been in jest, but now the pregnant actress has an offer to shake her booty for real – and earn thousands of dollars for it, too.

Applegate, 39, bared her belly and grinded against a pole to Christina Aguilera's "Dirrty" as a character named Roxy Fedaro in a (fake) commercial for a "Prenatal Pole Dancing" DVD.

"Many pregnant women experience these things called hormones because you're a total fat ass and you don't feel sexy anymore," Applegate said in the clip. "But that's why you need something I like to call ‘seducidence.' That's seductive confidence put together."

"Prenatal pole dancing works," she added, "because when men see pregnant women they know she's down for sex."

What a difference a year makes. Last year, Jim Bob and Michelle Duggar, of TLC's 19 Kids and Counting, were devastated when their baby daughter, Josie, was born at only 25-weeks-old via emergency C-section on Dec. 10, weighing a mere 1 lb, 6 oz.

"This baby is so small, I don't think she can survive," Michelle told PEOPLE at the time.

A year later, Josie is celebrating her first birthday, laughing, playing and clapping at a healthy 15 lbs., 12 oz. "She's waving hello and goodbye," says Michelle. "She's saying da-da … Her outlook is so wonderful. It is a miracle."

According to Michelle, Josie is doing well developmentally, though she continues with monitoring and receiving oxygen when she sleeps.

"We call her our little pajama girl because she has to wear a certain kind of snap pajamas for the monitor wires," Michelle says. "She is in 6-month-old clothes now, but we have some 9-month-old ones ready for her to grow into."

Highlights / Summary
- He will "never" stop playing video games
- Talks about his injury playing Wii
- He has scars from Chuck even though the fighting isn't totally real
- *** Clip of him recording voice work for Tangled (@ 2:47)
- *** Clip of him recording "I See the Light" for Tangled (@3:20) *hawt*
- How he has a character at Disneyworld (kind of)
- How everything comes back to inception haha

Sporting a black off-the-shoulder casual top, the “Project Runway” host looked a bit tuckered out upon arrival as she walked along with her personal security team and out to anawiting vehicle.

Mariah Carey's new holiday track "Oh Santa!" dashes all the way from No. 12 to No. 1 in just its second week on Billboard's Adult Contemporary chart, to be refreshed on Billboard.com Thursday (Dec. 9).

The coronation is the quickest by any title since the survey adopted Nielsen BDS-monitored radio airplay data in 1993. In that span, eight previous songs soared to the summit in as little as three chart weeks. (Seven of those songs were holiday-themed, as a majority of adult contemporary stations segue to yuletide fare each holiday season).
( Collapse )

Katy Perry has changed her name to Katy Brand officially, here are some new performance & backstage photos of Katy Perry performing at "Z100's Jingle Ball 2010" Presented by H&M on December 10, 2010. It's time to play "Address That Rumor" with Angelina Jolie!

Interviews with the Oscar winner don't come along every day, and when you actually have the opportunity to chat with her, you've got to maximize your time. Thus, when MTV News sat down with Jolie in Paris while she was promoting "The Tourist," we took the opportunity to throw out some rapid-fire questions about upcoming projects, persistent rumors and pop-culture preferences. OK, Angie, let's get down to business! Ryan Gosling and Michelle Williams attend a luncheon to celebrate The Weinstein Company's "Blue Valentine" at Upstairs At The Kimberly Hotel on December 9, 2010 in New York City.

Comedy, drama, live TV — this guy can do it all. Too bad he's so darn hard to look at.... ''Mad Men'' creator Matthew Weiner helps us count the ways his series' star earned his way onto EW's list of Entertainers of the Year. 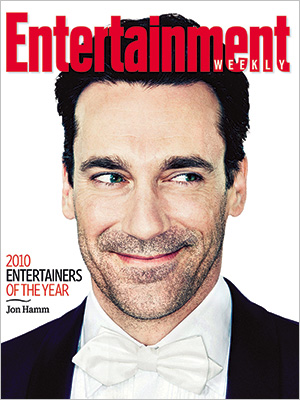 Above is a trailer for 'House Of Anubis'. An American version of the Dutch show is set to air on Nickelodeon in January 2011,

Nina, an American, arrives at an English boarding school. With the arrival of Nina, another student by the name of Joy mysteriously disappears. Eight young people are faced with this unsolved mystery, a cranky caretaker, dealing with school, growing up, and together search for the treasure hidden within The House of Anubis and uncover the hidden secrets...

Source
I hope everyone who watched the VGAs has gotten over the second hand embarrassment (I know I'm still cringing).

Can anyone tell me why we had to sit through Olivia Munn talking about eating wieners and giving men boners, but didn't get to see Tricia Helfer accept her award for Best Human Female Performance? Here's what she has to say about it.

Even with NPH getting screen time, they used the opportunity to make fun of his sexuality and appearing on Broadway. The whole thing seemed a bit impromptu and he looks pissed as he walks off.