Claire Danes & Dakota Fanning have been cast as Hilary Clinton in different stages of her life in an adaption of ‘RODHAM’.

The series follows an alternate reality in which Hillary Rodham Clinton met and dated Bill Clinton but never married him.

Claire Danes and Dakota Fanning have been cast as Hillary Clinton at various stages of her life for the upcoming series ‘Rodham’ based on the novel by Curtis Sittenfeld.

“Rodham” — published in May 2020, and a New York Times bestseller — imagined an alternative universe in which Hillary Rodham Clinton met and dated Bill Clinton at Yale Law School, but never married him. Instead of the life Clinton has actually led, in “Rodham,” she goes on to thrive as a Northwestern University professor, and launches an eventual presidential run in 2016. Real-world events — such as rape accusations against Bill Clinton, and Donald Trump as a significant figure in politics — also play out in Sittenfeld’s novel, but in vastly altered ways.”

has anyone here read the book? i trust the opinions here

i'm reading it now and enjoying it. i love sittenfeld's writing style

The idea of graphic bill sex scenes...I have seen Enough

I mean, if you're a messy bitch who lives for drama then you'll find it enjoyable enough. I liked it! Does not mean I necessarily think it was *good*, but it's a page-turner. The author previously wrote a book about a thinly veiled fictional Laura Bush and I think she just wanted to do it again but since Hillary & Bill are such characters in their own right she probably figured a good story would be lost if she tried to change too much about them.

The fanfic aspect is a bit weird but I really liked it.

I read it with low expectations and found it unfairly well written and actually enjoyed it! Like a historical fiction with americana vibes and mild liberal feminism thrown in. Then I got to the present day part and a couple of things were in such ridiculously bad taste that it soured me on the whole book I liked in theory the idea of AU Bill Clinton as a villain figure but 1) not if you're going to have trump as a character and make him kind of a bumbling friendly adversary - yikes and 2) every mention about Bill Clinton being a creepy sleaze reminded me that he is in fact a creepy sleaze irl and his wife has enabled him thorough - and just like that I don't really want to root for AU Hillary either. I think I would've digested it better if the author had kept up some pretense and at least changed the names.

UGH I swear I put in a spoiler tag. What a way to find out the HTML spoiler code doesn't work on here

Seems weird to have a Hillary Clinton fanfic series but alright.

i haven't read the book but seems like good casting, especially Claire. i can see her as a younger Hilary.

reading the summary on wiki and fanfic hilary leaves bill after rape accusations and infidelity and eventually goes on to be the first female president after beating jeb!. and a whole lot of other shit that hilary would have never done and did not do irl

fanfic about living people treated as legit entertainment, now that's too weird for me

I usually like Sittenfeld's stuff, but I didn't even try with this one. I draw the line at real people fanfic.

I don’t think she’s a delicate flower by any means but I find it really weird how she is very much still alive and yet all these men (or other people) have things to say about her life, her decisions, her choices. As if she’s a fictional character, or long gone, not a real person in the moment. Let her walk in the woods and live her life.

i could be wrong be wrong but i've always been under the impression sittenfeld was a woman!

i mean she was on tv a couple years ago, plugging her book and joking with trevor noah about how she didnt kill jeffrey epstein

i wish she'd fuck off to the woods lol 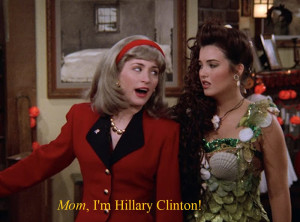 I was into the American crime story about bill and Monica and that makes me almost interested in this.
Previous
← Ctrl ← Alt
Next
Ctrl → Alt →