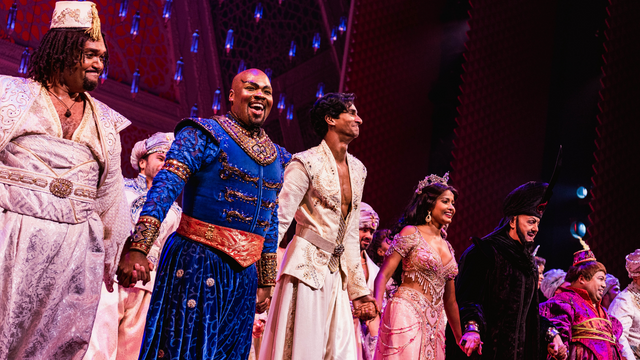 After 18 months of being shut down, Broadway reopened in September. Cast, crew, and staff at all Broadway theaters are required to be vaccinated, and everyone is tested for COVID every three days. In addition, everyone is supposed to wear masks while backstage. Each production is required to hire a COVID safety manager (they are not allowed to hire anyone who is currently involved in the production to take on this additional responsibility). And all shows have plans in place for what happens if someone in the company tests positive. Audience members must show proof of vaccination to attend shows and they must wear masks while inside the theater. Disney Theatrical said its cast members are undergoing PCR tests six times a week. This includes the Aladdin and The Lion King casts on Broadway, as well as The Lion King and Frozen touring productions.

Aladdin had its first performance on Tuesday, September 28. The next day, the show announced that their second performance (Wednesday, September 29) would be canceled due to multiple company members testing positive but that the show would resume performances on Thursday, September 30. The original tweet on the official Aladdin account has since been deleted, but you can see some of the text it here and here). I can't find a screenshot of the entire original message but the snippets I was able to find include "Our extensive protocol system to test our employees and identify positive cases worked, and allowed us to act immediately to contain those cases. Given the thoroughness of our COVID protocols and a vaccinated workforce, we remain confident that the environment is safe for our guests, cast, crew and musicians."

On Friday, October 1, the show announced that due to additional cast members testing positive, all performances for the next week and a half have been canceled. They are currently saying that the next performance will be on Tuesday, October 12.

Important information regarding performances of ALADDIN on Broadway. pic.twitter.com/onaMiDoI9b

[text reads: Although negative PCR testing allowed us to move safely forward with last night's performance of Aladdin at The New Amsterdam Theatre, additional breakthrough COVID-19 cases were detected within the company today. Because the wellness and safety of our guests, cast, and crew remain our top priority, we feel the prudent decision is to cancel performances starting tonight, Friday, October 1st through Sunday, October 10th. Our next planned performance is Tuesday, October 12th at 7pm. We will continue to provide support to the affected Aladdin company members as they recover. We apologize for the disappointment and inconvenience this causes ticket holders, but we trust that our audiences will agree that safety must be at the forefront of our return to Broadway. All tickets for these performances will be refunded at the original point of purchase.]


National tours are operating under similar conditions as Broadway: all company members must be vaccinated (but at some theaters, the COVID precautions required of audience members aren't as strict which means unvaxxed people can attend), and they are all tested regularly.

Less than two weeks before Aladdin had to cancel shows, one of the Hamilton tours was forced to cancel a performance due to multiple cast members testing positive. The Philip tour had just reopened on August 22 in Atlanta. On Wednesday, September 15, audience members were left standing outside in the rain waiting to be let into the theater. Normally the doors open for shows 60 minutes before the curtain time, but the theater kept the doors closed. About 20 minutes before the show was scheduled to begin, an usher came out and announced to the crowd that the show was being canceled due to technical difficulties and that people could either get a refund or exchange their tickets for one of the remaining dates (the tour was in Atlanta until September 26).

The theater later issued an official statement saying that the company's COVID tests did not come back in time so they canceled the show "out of an abundance of caution." The show was rescheduled for the following Monday (which is normally the company's one day off). According to My Friend with a Bike, what really happened was that three cast members tested positive on Wednesday and the rest of the company did not feel comfortable performing that night because they knew more of them could test positive in the following days. Everyone was retested and by the next morning there were five cast members who had tested positive. They resumed performances on Thursday, September 16.

Touring shows usually have a handful of swings who travel with the company. If an ensemble member can't perform (or if an ensemble member who is an understudy has to step in for someone in the main cast), a swing will take over the ensemble member's role. There are also what's known as universal swings who do not travel with the company but can be called in if they are needed. Because so many cast members tested positive, they didn't have enough swings within the company to cover everyone and they had to fly in universal swings as well.

According to an interview with Hamilton producer Jeffrey Seller (published on September 1), during the month of August there was one cast member out of three touring companies who tested positive for COVID (the And Peggy tour reopened in San Francisco on August 10, the Eliza tour reopened in Los Angeles on August 17, and the Philip tour reopened in Atlanta on August 22).

Broadway and national tours have only been open for about a month and there have already been two shows that have had to cancel shows due to COVID. Was it too soon for live theater to come back? Or was this just bad luck?

Source:
twitter and My Friend with a Bike (all other sources are linked above)

ONTD, would you go see a live show in a full capacity theater of 2000-3000 people right now?
What is the first show you want to see when you return to the theater?
Tags: broadway / theatre, covid-19
Subscribe