Twitter calls out Simu Liu for Men's Rights Asians past

Please take the time to read this incredibly in-depth and thorough investigative essay by ⁦@aarontmak⁩ on the MRAsian subculture on Reddit. I sincerely appreciate the attention Aaron took to this story. https://t.co/uIwDv1rCt8

Which led actor Edward Hong to chime in with something I think a lot of ONTDers already suspected: 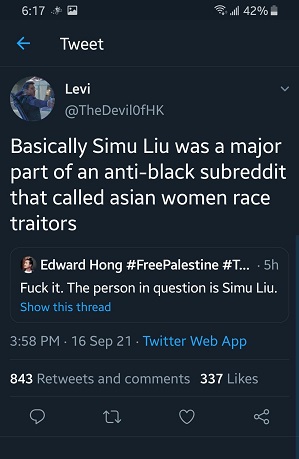 Hong locked his account shortly after posting a series of tweets calling out Simu Liu. Unfortunately didn't a screenshot before he went private, but I did get the above before it was deleted. The "Fuck it. The person in question is Simu Liu," was right after a tweet noting how the article "understandably" left out one of the biggest celebrity ringleaders of the mrazn redditors. ETA: He's unlocked his account now. Per github tho, Simu only posted in the big mrazn sub (r/aznidentity) a handful of times, so calling him a ringleader is a huge exaggeration. Doesn't take away from all the API women who have called him/his crowd out over the years, but figured I'd clarify before the Marvel stans think this is some 4chan disinfo campaign.

Writer Roslyn Talusan had something to say as well:

liu got an AsAm podcaster harassed off of here over a vague tweet about his abs, his politic is rooted in assimilating into white power, he has a shitty reputation in toronto for the way he dates AND works....

and i still saw people drooling over him at the met. https://t.co/U7jveUBdRI

It shows him commenting in the racist incel subreddit called into question (among other things) pic.twitter.com/SXyoKu2Kaf

Apologies for this not being clear, but if you google "Reddit /u/nippedinthebud" this AMA shows up + other comments, showing that he posted the thread even though it just says [deleted] now

harrys_headband for finding this tweet exposing simu for comparing pedophilia to homosexuality:

In response to this fiasco, Simu Liu links back to some mealymouthed tweet from a couple of years ago:

Oh cool this is here

Twitter is a slanderous place sometimes, and it feels good to shut down trolls and bad faith actors who want to drag your name through the mud.

Summary: Simu Liu was once part of the toxic/sexist/racist r/aznidentity subreddit. Unfortunately a lot of the receipts have been scrubbed, but API women have been calling him out for a long time. EDIT: according to https://camas.github.io/reddit-search/#%7B"author":"nippedinthebud","resultSize":100%7D , Simu did not actually post to r/aznidentity more than a handful of times, so the characterization of him as a 'celebrity ringleader' of the sub is a major exaggeration. No defense for the pedo stuff or the racism on twitter though.