Supernatural star/kmart version Jeremy Renner recently just came off the heels of being criticized for his preformence as Dean Winchester in the series 18 episode of their final season. Some fans have noted and remarked "he looks like he's holding back a slur" while the angel character Castiel confesses his love for him. Well now he is once again under fire in fandom spaces for a 2013 convention video resurfacing.

Since there is so much back and forth about this, I feel that people need to see this new video that surfaced to get the context of what REALLY happened. pic.twitter.com/sivB3X1cUe

In the video it can be heard and seen Ackles reacting to a fan about to ask a question regarding dean’s potential bisexuality subtext. The fan was not able to finish asking said question due to others in the crowd booing causing her to shut down and apologize. Ackles seemed to agree with the crowd and vocalized his distaste with the direction of the question. Even when as far as to chastise her by telling her to not "ruin it for everyone." The fan was promptly escorted out right then and there according to her retelling of events in a now deleted tumblr post. The video in question has opened the door for newer fans to wonder just what his problem is, and why does the “subtext” people have of dean (ackles character) seem to get him into such a tizzy.

This isn’t Ackles first rodeo at possible homophobic accusations. At a previous convention Ackles was asked if he would ever like to star in a cowbow movie. His answer is a bit of a shock to his die hard defenders who gave themselves the moinker “ackles army“. “You know, I would say yes,” Ackles starts, and continues, “but then Brokeback Mountain came out, and my desire to do a cowboy film completely tanked.””

At Aslyum 3 a fan asked if he would do a cowboy film. Jensen: "You know, I would say yes, but then Brokeback Mountain came out, and my desire to do a cowboy film completely tanked." pic.twitter.com/IPUTbmQBrj

There are also other instances of Ackles being downright puzzling when it comes to the topic of fan questions with possible lgbt undertones. Like, when asked if the impala were to ever become human - but in a mans body - would dean still call him baby ?(deans nickname for his car). Jensen seems to be taken aback and a bit offended. Asking “who comes up with this stuff?”.

6.) The male impala question
I included this in the thread just to show you his thought process through one innocent question. Jensen basically implies, Dean riding an impala with male pronouns/male human form would be unmanly and gay (derogatory). pic.twitter.com/nGAW8bZh5A

The same question was asked in another convention according to a fans con report over twitter. The question received quite a different reception from Ackles. Some think it had to do with the impala in this instance would have a woman’s body. Ackles seemed to have even cracked a joke from it - “we can all fit in her..”

There was also the meeting he demanded to have when reading the 200 script, and how it heavily involved “shipping”and “fan fiction”. Something he’d hope would go away if he’d have been able to ignore it. 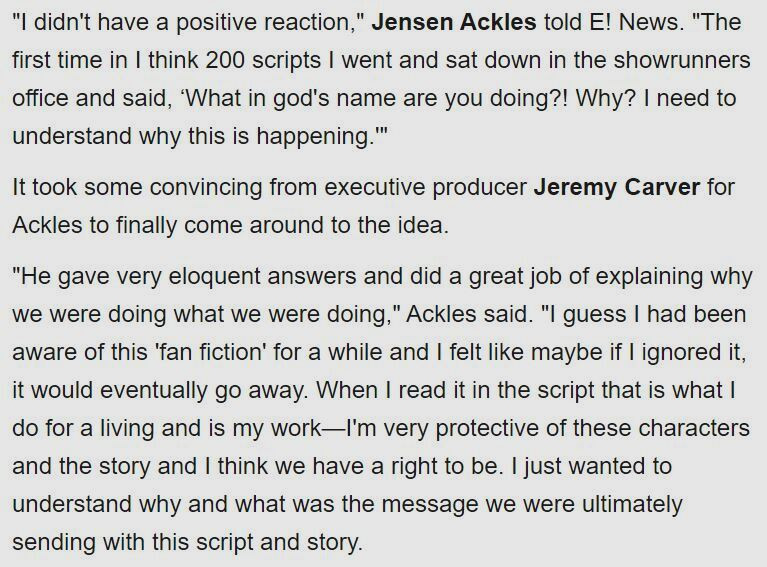 It may seem Ackles might be uncomfortable with the the whole slash shipping some of his fans partake involving his macho character Dean Winchester, which he has said he identifies a lot with in the past, Does this make Ackles a full blown homophobe? Maybe it's just fans feeling a little too entitled? Or are his Ackles Armies correct in thinking this is an attack on his character? He has a great relationship with his gay aunt and her wife according to them (Ackles Army) at least.

Jensen Ackles can be found starring in Eric Kripkes’ third season of The Boys as soilder boy - which some have said is a basement budget Captain America. The soldier boy role came by way of Ackles phoning kripke asking if anything was available for the recently unemployed cw alum.