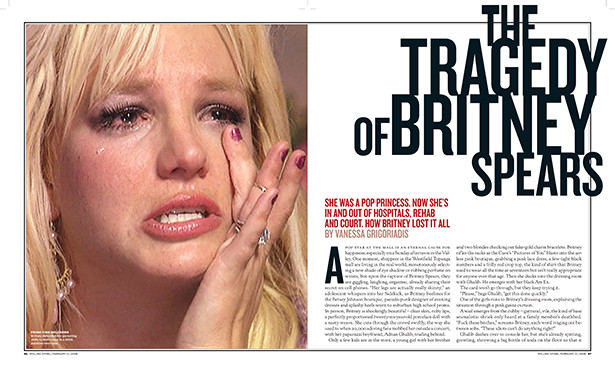 On February 21, 2008, the first of two Rolling Stone covers starring Britney Spears that year hit newsstands. Using a portrait of Spears taken in 2004, it invited readers "inside an American tragedy," by way of a nine-page story by then-contributing editor Vanessa Grigoriadis.

Unable to secure a sit-down with her troubled subject, the journalist's contact with Spears, "a perfectly-proportioned porcelain doll with a nasty weave," was limited to distant encounters as she tagged along with paparazzi from Hollywood.tv. (Grigoriadis would later cite the website's founder, Sheeraz Hasan, as her primary source.)

"The Tragedy of Britney Spears" seemed to confirm several longstanding rumors about Spears—that she'd had, and swiftly removed, breast implants in her late teens, and had consummated her relationship with Justin Timberlake long before publicly proclaiming abstinence—and suggested that she'd been abusing pills prior to her first hospitalization on January 3 of that year. It painted her, not as a young woman in the throes of a mental health crisis, but as a chain-smoking "inbred swamp thing," "arrogant, anxiety-ridden and paranoid."

Below, eight of the story's most illuminating and/or sensational passages.

Full story at the source.

i didn't include it in the post, but there is a passage about her january 31 hospitalization that's disgusting:

"Seventy-five paps gather around the entrances to Britney's gated community, stamping their feet in the chilly winter night, as a police helicopter circles overhead. 'You don't want an ambulance to roll out with a body bag and miss that,' says a French photographer, checking his battery. These guys are jaded after all that's happened. 'Man, Britney can't die, because then I don't get my money!' says a guy in a Famous Stars and Straps hat."