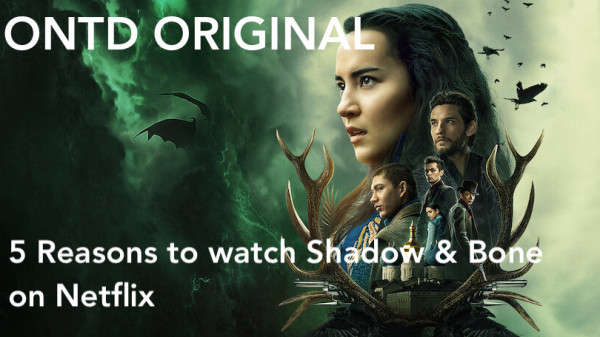 Shadow & Bones is the latest Netflix YA book adaptation that was released worldwide on the 23rd of this month. This is how I described it to my sister word for word in the text message I sent her on the weekend using Harry Potter as a comparison:

“It’s set in like a fantasy Russia. There's this big black scary thing in the middle of the country called "The Fold" where it’s like dementor paradise. There's a bunch of people called "Grisha" aka Wizards with powers. And they're trying to get rid of it, but they need a person called a Sun Summoner (Harry Potter) to get rid of it. Harry's a girl in this and Ben Barnes is in this, and he’s like Hot Voldemort?? I dunno just watch it pls”.

And now five reasons to watch:

1. BIN BONS IS HOT IN THIS: Honestly this is the only reason why I’m writing this original. Bin Bons has never done anything for me swoon wise (and I watched him in Westworld), but I needed the smelling salts for him in this!! It’s like playing a hot asshole is appealing? I hate myself.

2. Diverse POC characters with a banging wardrobe: There are a few main characters in this where their ethnic backgrounds are not their whole storyline or used for stereotypical purposes. Also I am a sucker for the costumes in this. There are great embroidery details and a bit of a steampunk aesthetic. Also they put Bin Bons in a lot of black, which matches his black shark eyes.

3. Great world building and good visual effects: If my Harry Potter comparison earlier on was not good enough to describe the show, the trailer does a good job of showing the world of Ravka.

4. It’s only 8 episodes long: I read on other message boards discussing the show that this adaptation was pretty good at streamlining the plotlines from the books and making them coherent and interesting. The short season is quick to get through, making it an easy one or two day binge.

5. So you can come into these posts and discuss the show: Unfortunately I didn’t immediately start watching the show when it came out, due to me not caring initially until someone told me it was not “Fate: The Winx Saga- bad”. I remember enjoying going into True Blood and Reign watch posts back in the day, but watching shows is completely different now. Feel free to use this post to discuss, ask questions, or share smelling salts.

Have you watched Shadow and Bones yet ONTD? Discuss y/n, spoilers are welcome, so beware.