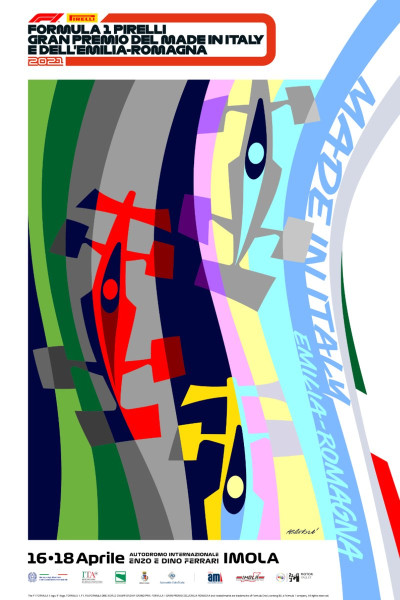 Name of the race track: Autodromo Internazionale Enzo e Dino Ferrari
Y'all, the official name of this race is the: Pirelli Gran Premio del Made in Italy e dell'Emilia Romagna. Nickname is Imola

Imola GP Snapple Fact: Last year, for much of the grid, even the veterans, that was their first time on this track since it hadn't been used since 2006. At the time, the only drivers who have raced on it are Kimi Raikkonen (at McLaren, now at Alfa Romeo) and Fernando Alonso (at Renault, now at Renault). This track also served as the host of the Italian and San Marino Grands Prix.

On a heavier note, it should be noted that back in 1994, this track is where we lost the lives of two Formula 1 drivers of Brazilian WDC Aryton Senna and Austrian F1 rookie Roland Ratzenberger.

The race is an hour earlier due to Prince Philip's funeral, so tune in at 8:55 AM EST.

Drenched in places, dry in others!

We're just 40 minutes away from lights out, and the weather definitely isn't making its mind up 🤔#ImolaGP 🇮🇹 #F1 pic.twitter.com/fLAA9tijgB


In Bahrain, our winner was: 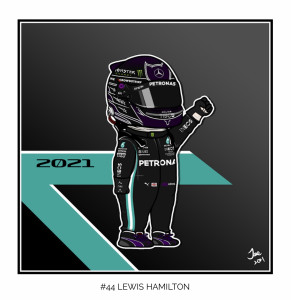 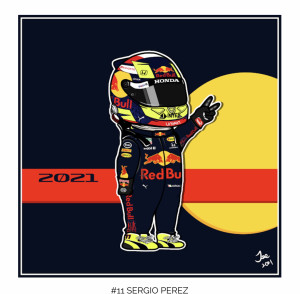 Who pulled off an amazing drive from the pit lane to 5th place!

Some background: In F1, only the top ten drivers out of the twenty on the grid are given points. First place is 25, 2nd place - 18, 3rd place - 15, 4th place - 12, and then dropping off so the 10th place is only given one point. Whoever sets the fastest lap time, gets an extra bonus point (this does not always go to the race winner). The points collected by the individual driver is what determines who wins the World Driver's Championship (WDC).

There's also a constructor's championship (WCC) given to the team who earns the most points. This is pretty simple, the points contributed by each team's drivers contributes to the Constructor Championship standings. For example after Bahrain, Mercedes-AMG Petronas has 41 points (25 from Sir Lewis's win and 16 from Valterri's third place finish).

Here's OP's graphic design is my passion for the 2021 Constructors, so far (I'm working on it y'all) 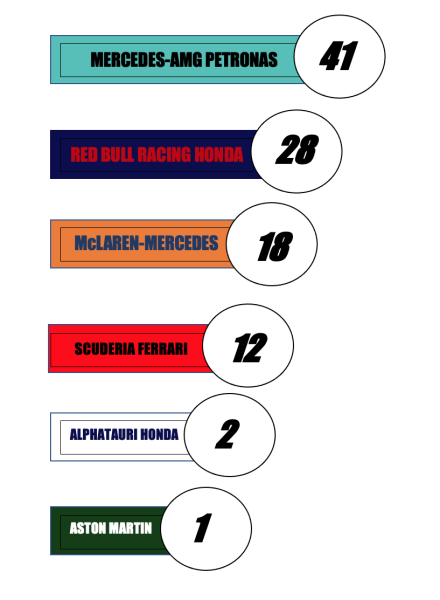 What's pole position? The first place on the starting grid, as awarded to the driver who recorded the fastest lap time in qualifying.

It's Sir Lewis Hamilton and his little summer passion twists! With Red Bull Racing's Sergio Perez and Max Verstappen at 2nd and 3rd, respectively. This is the first time that Verstappen has been out qualified by his teammate in four years since Daniel Ricciardo. It looked as though McLaren's Lando Norris would take second, but stewards gave him a time penalty for going off the track, disappointingly dropping him down to seventh. The qualifying session was delayed in Q1 with a red flag after AlphaTauri's Yuki Tsunoda crashed, causing significant damage to the car.

Here's the top ten on the grid for today. 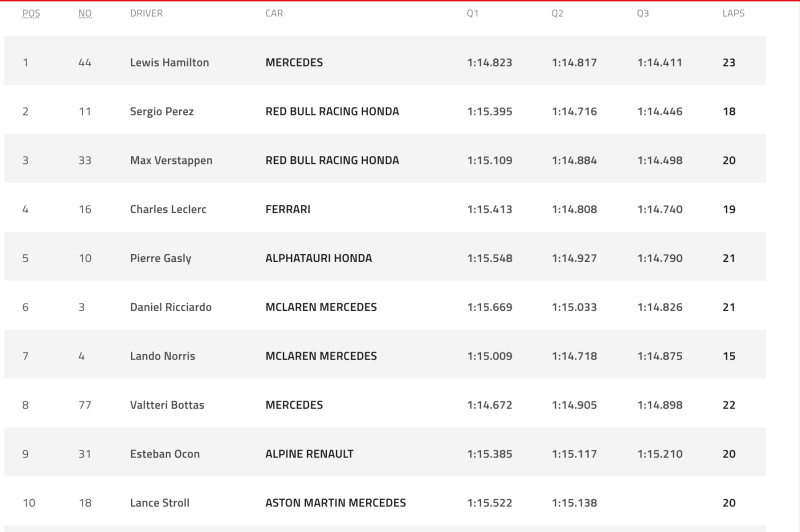 Just to show how close the top 8 are on the grid today, here's an illustration. It's the closest the grid has been since the 2012 Malaysian GP! Looks like this will definitely be an exciting race. 
There has been some contradictory reports of whether the Canadian GP, scheduled for July, will be cancelled for the second year in a row. FiA officials from F1 thinks it can continue, but we'll see. If the race is cancelled, a replacement race in Turkey will be held instead.

And for 'murica! Y'all our sorry ass country is getting another GP site in, party in the city where the heat is on, all night, on the beach till the break of dawn "Welcome to Miami"! Looks like they will be prepping for the 2022 season and it looks as though the US Grand Prix (the Circuit of the Americas) in Texas is still staying.

F1 is an expensive sport and if you every needed an allegory to explain socioeconomic disparity, you could probably use this (plus Kid Nation). But if one of them wants to get me flewed out to Monaco...

DRIVER OF THE DAY: Lando Norris

Our next race will be Heineken Grande Prémio De Portugal 2021 on May 2.


Absolutely no one:
No one:
Cyril Abiteboul: i am lateeen i am mediteRRranean i am fRRRRRench, i am emozzional. i vill not tRRY to ‘ide it